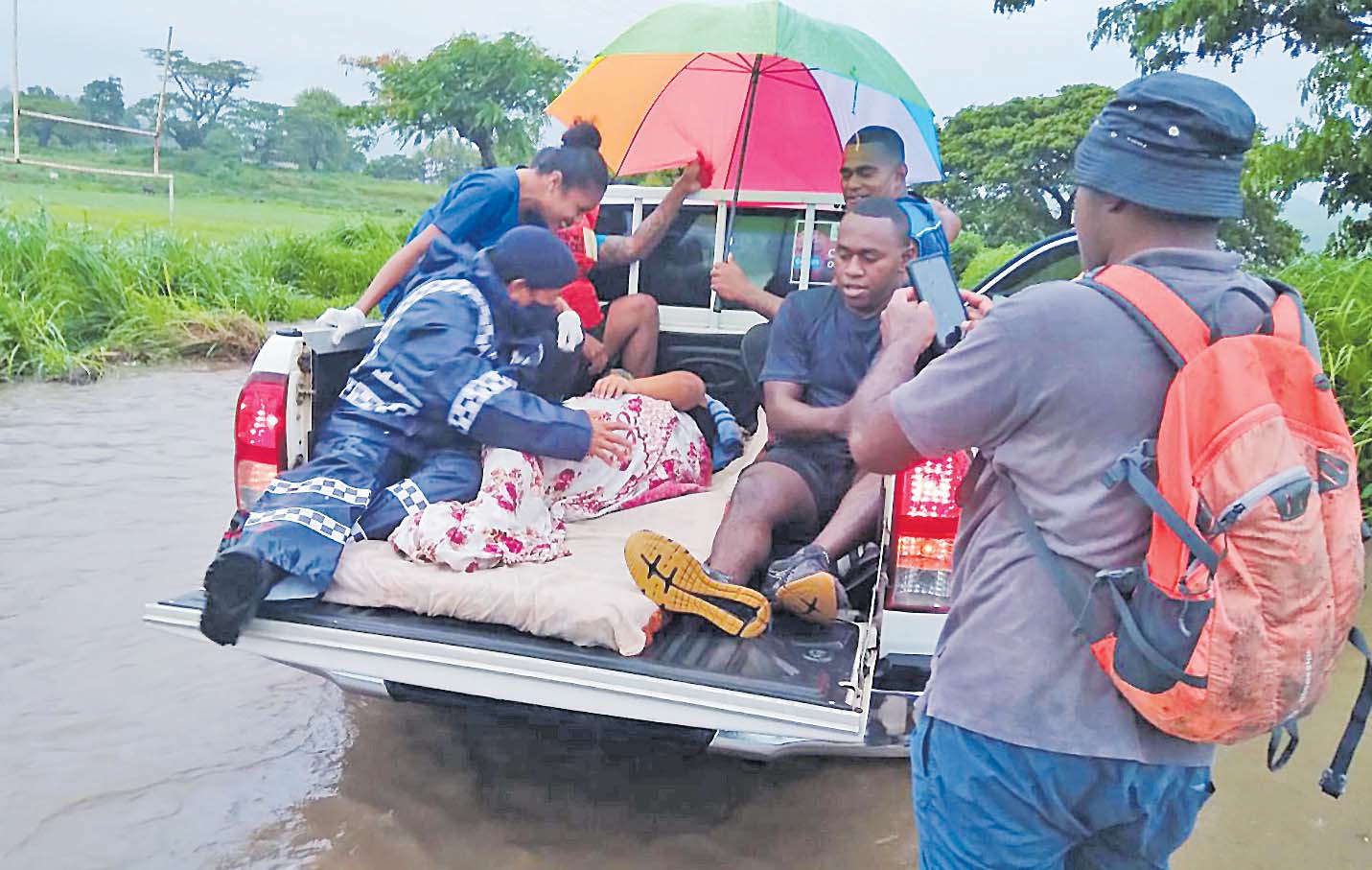 Sristi Naicker is transported to the hospital on a Ministry of Health vehicle. Picture: SUPPLIED

Heavy rainfall and floodwaters did not deter the Rakiraki National Fire Authority officers and police who evacuated 28-year-old Sristi Naicker in Rakiraki.

The NFA officers and police were commended for their act of bravery at the height of the natural disaster as they transported the pregnant mother in a water tank across the flooded FSC road. The officers conducted their duty with pride and diligence as they helped Sristi deliver a healthy baby.

The story of this courageous rescue has been circling social media as well.

The team, consisting of firemen, police officers, health workers and other stakeholders, has been applauded by various authorities including the assistant commissioner of police Abdul Khan. Hats off to the team for their act of bravery!

I also commend other Fijians such as Azad Chandra Prakash who helped their fellow Fijians during the flood. I also thank our brave journalists for risking their lives in order to cover the events.

The heartbreaking pictures and stories from all over Fiji show the amount of suffering Fijians went through. RAJNESH ISHWAR LINGAM Nadawa, Nasinu

“THE borders are not closing. The schools are not closing either. But we are stepping up enforcement and penalties for violations of health measures,” says Minister for Commerce, Trade, Tourism and Transport Faiyaz Koya (FT 10/1). But isn’t it a bit late in the day to implement such deterrence when it should have been done much earlier? Now, hundreds of people are already infected and in isolation. Why is there always an element of hesitancy when it comes to making a decision on such matters? It seems to me that other interests always supersede the safety and welfare of our citizens. Dr Fong has warned that the Omicron variant infects a large number of people in a short period and the large number requiring hospitalisation will put pressure on our health care system (FT 9/1). I believe we knew in December that Omicron was here and we should have acted promptly to curtail it from spreading. What’s the point of closing the gate after the horse has bolted. When are we going to learn from our past mistakes and become proactive instead of firefighting? SELWA NANDAN Lautoka

Dewan Chand credits both FijiFirst and The People’s Alliance for being successful in securing support from the wealthy (FT 11/1/). That is exactly the point of difference with SODELPA in that our support comes from the “lewe-ni-vanua” (the people), in the little way they can. We remember an unknown politician, Barrack Obama, who did this. The wealthy supporters have a way of influencing policy at odds with the wishes of the “lewe-ni-vanua”. Most of our policies are already known as outlined on our website and I continue to articulate them in Parliament. And if wealthy supporters do come our way, it is because they agree with our policies. With the high-profile people fronting both FijiFirst and People’s Alliance, some are wondering as to who is with SODELPA. Our people may not be high profile, but rest assured, they are strong on policies, without baggage and not beholden to anyone. Viliame Gavoka Party Leader, SODELPA

Novak Djokovic’c court victory in overturning the Federal Government’s decision to cancel his visa without giving him “procedural fairness” I believe exposes the arbitrary exercise of state power by the mob in power in Australia. Djokovic had the means and the international high profile to successfully challenge the Australian government decision. Many refugees locked up and languishing in limbo (some for eight or nine years ) in Australia’s detention facilities don’t have Djokovic’s clout. I believe their predicament is an indictment on the Australian state’s cruel, unfair and inhumane treatment of people who sought our protection from the political persecution they suffered in their home country forcing them to flee. It’s a crying shame. Rajend Naidu Sydney, Australia

Yesterday’s front page of the other daily (11/1/2022), had a picture of the Minister for Rural and Maritime Development and National Disaster Management, Inia Seruiratu, breaching a COVID-19 protocol of not wearing a mask. A very basic protocol implemented by the very same Government he “serves” in. Minister for Commerce, Trade, Tourism and Transport, Faiyaz Koya, stated in the FT 10/01/2022, “we are stepping up enforcement and penalties for violations of health measures”. Talk about negligence and laxity. Oh what arrogance. I say fine him. Anthony Sahai Suva

I know this is not my business but during inclement weather periods which presents potential risks, is it a good idea for adults in the family to be asleep during the night? Mohammed Imraz Janif Natabua, Lautoka

There’s nothing like a pandemic to remind all of us the vulnerability of the human life. Wise Muavono Balawa, Lautoka

On the back page of the other local newspaper dated 11/01/22, a proud fan is pictured with Ben Gollings at the Nadi International Airport. The fan met Gollings before he went into quarantine! The fan is not even wearing his face mask properly. Will the fan be fined $250? Vinesh Prasad Nausori

I believe when the dust settles, authorities really need to look into the issue of flooding. So much has been done in order to make our towns, cities and communities flood free or at least lessen the impact of flood but the reality on the ground still has not changed much. Whenever there is a prolonged heavy downpour, the result is almost the same as in the past. Where is all the work that has gone into pertaining to mitigating the effects of flooding? It seems like we are hitting the same brick wall. How long can we continue to blame climate change? Perhaps, it is time to draw a clear line between what we can seriously do to reduce the impact of flooding and the impacts of climate change. Pranil Ram Votualevu, Nadi

Colin Deoki’s thought provoking question, “How to put an end to coups” (FT 11/1), is a national talanoa that all citizens of Fiji should have. The country’s future depends on it. For a small Pacific island nation with less than one million people, we have already had one too many coups which have taken us backwards. We can’t progress as a nation without putting a full stop to coups. Rajend Naidu Sydney, Australia

Energy Fiji Ltd (EFL) is a private company and I am wondering if EFL can compensate its customers for freezer goods and appliances that got bad because of frequent unplanned power outage? Narayan Reddy Lautoka

Even before the cyclone develops, the power is off. If there is an issue, solve it during the day. There should be an alternative route. Jaheed Buksh Korolevu, Sigstoka

Sadly and truthfully, another honoured son of Fiji, another victim of the 2006 man-made political upheaval leaves his Earthly home to re-locate to his heavenly abode. Life on Earth can be brutally cruel. Vindictiveness is hurtful. Also removing you from office with much indignity, was another bitter pill to swallow. “The good that man do; Is oft interred in their bones.” — (William Shakespeare) Rest in perfect eternal peace and everlasting happiness with the Lord your God former solicitor-general and one of Fiji’s most senior lawyers, Nainendra Nand. Fiji’s loss; heaven’s gain. Ronnie Chang Martintar, Nadi

The demise of former solicitor-general, Nainendra Nand, 63, was greeted with shock and sadness. Mr Nand was removed from his position in 2006 after the military coup. I read the tribute by Graham Leung, who is a Suva lawyer and worked with Nainendra Nand in the Crown Law Office which later became known as the Attorney-General’s Chambers, and I thank Mr Leung for the fitting farewell. These lines from Mr Leung’s tribute touched me, “Had he chosen to side with those who had removed the elected government, Mr Nand could have handpicked any legal job in government he wished, but being a man of principle, he was resolute in his opposition to the 2006 coup, indeed all of Fiji’s coups d’état. Mr Nand would wish to be remembered as a lawyer who stood up for the rule of law, and paid the ultimate price for doing so. He belonged to a diminishing generation of Fiji lawyers for whom the love of the law and justice transcends fame, power and material wealth.” Beautiful words to describe a man of principle. Mr Nand was a distinguished civil servant and would be remembered by many as a man of integrity, diligence and intellect. Just like Professor Brij Lal, he was a man who had the nation at heart, and it’s sad that we have lost a gentleman and academic scholar. Rest high and rest in peace, Sir! Rajnesh Ishwar Lingam Nadawa, Nasinu

I BELIEVE what the Water Authority of Fiji is trying to tell the whole of Fiji is that they have run out of excuses and need a $1 billion budget to improve water levels in their treatment facilities around Fiji. WAF, I believe, is sleeping on innovative ideas and lack a clear vision. The WAF CEO keeps stating water turbidity is an issue and sediments need to settle before treatment begins. What he fails to understand is that even the Viria water project is a failure. It was said to be completed by March 2022, then July 2022 due to EFL carrying out installation of power lines and poles to the treatment plant. Now WAF has said it will take two years to complete. China, USA, NZ and Australia have adapted to new technologies. New and advanced water filters are now in the world. Countries are now filtering salt water into drinkable water. Yet, WAF is full of excuses. There is no water pressure for one year now, yet main bursts occur daily in Vatuwaqa. This shows the type of work WAF is doing. AMRIT SINGH Nausori