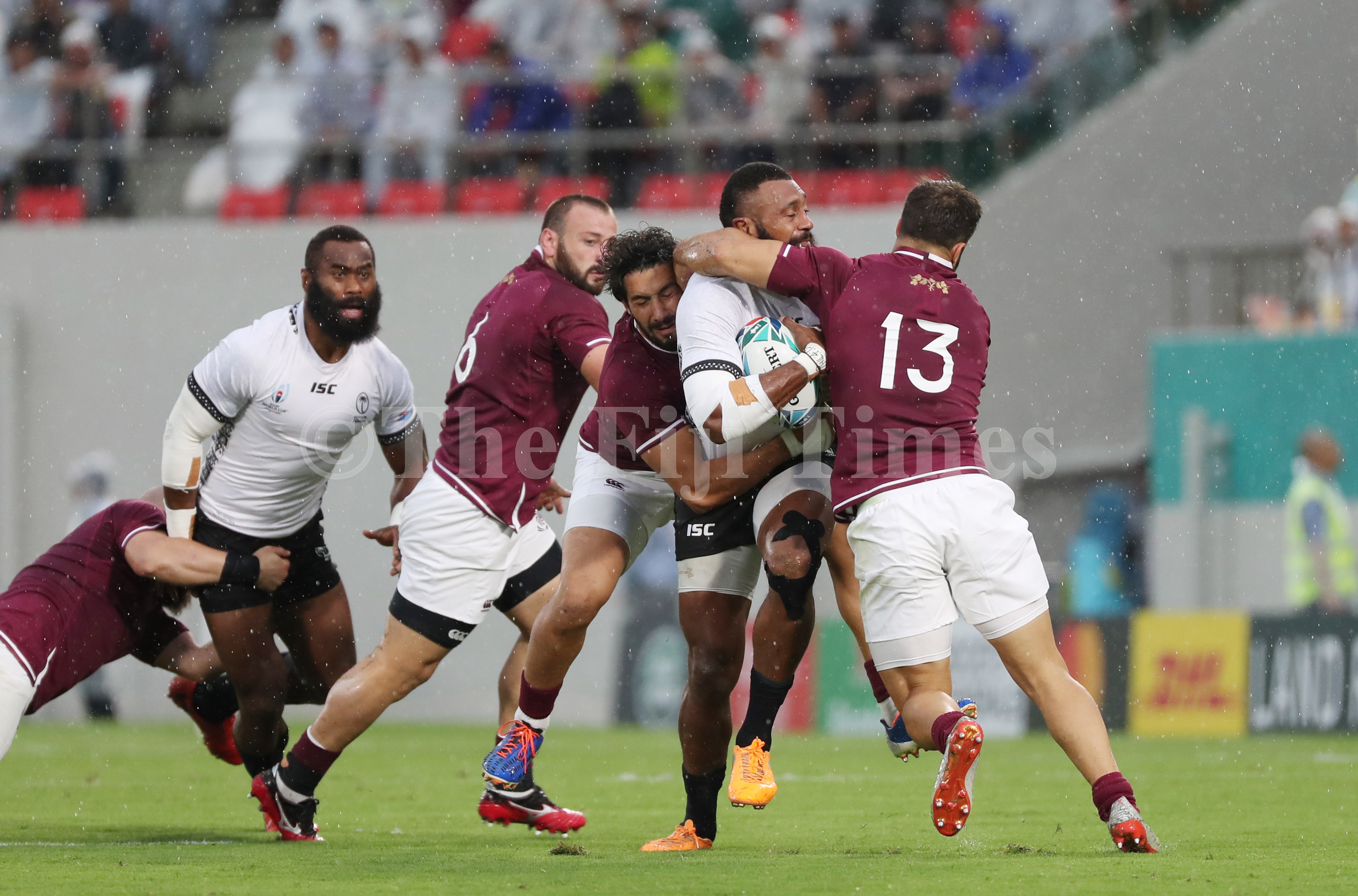 The game with Georgia is now a done deal.

At least it’s not all going downhill.

We need to douse the Welsh dragon’s fire.

So that our points can go much higher.

But Fiji beer will really be a bitter.

If we get a kana kuita, in the city of Oita.

I just wish a miracle happens and Fiji makes it to the quarters.

Otherwise, the loss at the hands of the Los Teros will haunt us until the next RWC.

On the other hand, the ‘if’s’ used to give so much headache reh!

People are still dumping waste in our rivers and waterways (FT 07/10).

In this era where everyone knows the consequences of such an act, it seems people are not ignorant but fools to continue with such foolish acts.

Our PM has vigorously pursued global campaigns for environmental-related actions to control the monstrous effect of climate change.

However, our own people have shown how foolish they are by dumping waste in our rivers and waterways.

This not only creates bad smell but blocks water passages which lead to flooding, affecting them as well.

I do not think such issues should be taught as any person with a little common sense can assume the effects of such illogical deeds.

Added to this is the dumping of waste by industries and business enterprises.

The credibility of the so-called graduates or educated is at stake.

Our ancestors were much wiser in ensuring a sustainable environment during their term of life although they had no formal education.

Sad to say but the current society is proving to be inconsiderate even after knowing the consequences of their actions.

Please manage your waste sensibly and be role models for the young ones.

The article in the FT 05/10 on the containment program for the Giant Invasive Iguana made very interesting reading and is most commendable.

However, what struck me was why this information and the strategic steps being taken now by the Biosecurity of Fiji (BAF) was not pursued soon after this iguana was discovered on Qamea in 2000 — 19 years ago and that we only calmly talking about what we are going to do, now.

Surely the “horse has already bolted” so to speak.

If each female normally lays, say at least 10 eggs, I am sure I am being conservative.

Then bearing in mind an exponential growth rate, in a scenario where there is an abundant food source, no predators, and no major eradication system in place, just imagine the population size today after 19 years.

The article then goes on to say ” … this can surely lead them to multiply into larger numbers to the point it may become difficult to manage.”

We are certainly way, way past that.

All that’s left now is damage control and contain its further spread.

Who knows it may already be on Viti Levu.

Anyway, we can only wish BAF the best of luck in its eradication endeavours.

Wouldn’t it be nice if the PM went to Japan for the Fiji vs Wales game and encourage the Fiji rugby team?

Anyway more members of the FijiFirst party should be given the Acting Prime Minister’s post.

Can Narayan Reddy advise us how will the municipal councils save cost if they merge?

I believe hundreds of lost jobs because of FSC issues, many more are unemployed.

Much is being said about the sugar industry and the FSC’s derailing results following the publishing of the latest annual report.

After having a read of the letters to the editor, I believe many do not know or do not realise how many Fijians rely on this industry.

It cannot be shut down overnight.

If one must know there are so many people directly reliant on the sugar industry even today.

The industry has supported thousands of Fijians dating back from the colonial era until today when tourism, manufacturing, construction, retail, banking have taken over.

There are a lot of improvements needed in all these companies and a cost saving structure needs to be implemented for the near future.

The FSC going concern continues at a loss, and currently are results of past mistakes and mismanagement of funds.

The company needs a lot of support from all its stakeholders in order to survive and rather than pointing fingers at the FSC/its people/the farmers, we should get together to assist the industry.

Let us hope for the betterment of the sugar industry which makes the Fijians so much sweeter.

Any update on the Lautoka Botanical Garden swimming pool?

Now that fundraising in schools is back, who were the “experts” who decided to remove it?

Fiji has struggled when defending mauls (from line-outs) because there are one or two Fijian players who are in an upright position.

They try to get hold of the player who wins the lineout.

When the ball gets quickly transferred to the back of the mall, the players in upright position are unable to exert force.

I think there has to be a combined effort with all the players having better body position and binding.

The key to mall disruption is initial hit.

When opportunities of attacking line-outs arise, it won’t be a bad idea if some players from the back line join the maul (after winning line-out).

When Fiji has kick-offs, like many other teams, the ball is kicked deep.

The receiving teams stack players in this area.

The ball is caught and kicked back.

The Fijian players run forward from the half way line and then back.

This is a simple waste.

We have players like Radradra, Nayacalevu, Nakarawa and others who can contest for possession.

The kickoffs should target the middle of the ground between the 22m and 10m line.

Technicalities and strategies will be handy against the Dragons.

I commend as many people as possible to read Dr Wadan Narsey’s comments on the sugar industry in last Saturday’s The Fiji Times.

In my own “uneducated” fashion I have been trying to get my fellow citizens to alert themselves to the perils of these continued loans to the FSC, most of which are guaranteed by Government or the FNPF.

Dr Narsey explains in great detail where the perils lie.

I have been in Fiji long enough to recall the NBF saga, the result of mainly unsecured loans to people who did not deserve them.

I also recall a famous politician saying the problem was now “water under bridge”, what analogy can be dreamed up for when the FSC gets into more dire straits.

Of course I am mindful of the impacts a failed FSC will have on thousands of people, but soon there may be no alternative.

I believe a lot of creative accounting is underway, but will this create an improved FSC?

It may be useful to expose and prosecute those involved in mismanagement of loans.

If I know who the culprits are, many others must.

Perhaps I should reopen my social media accounts, anonymously this time.

Fiji rugby fans had high hopes that our Flying Fijians team will fly high in the 2019 Rugby World Cup and some even predicting that we will win the Rugby World Cup.

We thought that our dream was to become a reality after the excellent first half performance by our boys against Australia in their first Pool D game.

But things changed at the second spell.

The second pool game against Uruguay and the narrow loss just broke the hearts of Fiji rugby fans and some just could not control their emotions and let their frustrations and anger go on social media.

But, the game against Georgia lifted the spirits of Fijians and we all love the comment by a sports commentator who said that it’s unfortunate a brilliant team like Fiji deserves to be in the quarter-finals of the Rugby World Cup.

Tomorrow is the last pool game against Wales, who lead Pool D after defeating Australia.

If Wales beat Australia and Australia beat Fiji then we can all say that the Flying Fijians will go down to Wales.

After the winning performance against Georgia, I believe the Flying Fijians can cause an upset win against Wales.

Win or lose, as long as they give it their all as they face the giants of rugby, we will continue to support and pray for our national team.