Letters to the Editor: Tuesday November 5, 2019 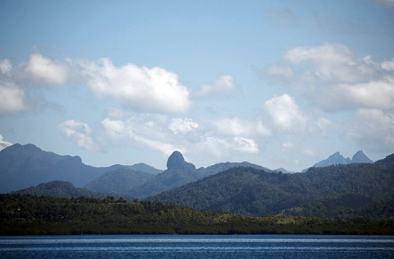 There is much I can add to your excellent article on the “Devils Thumb”. I first conquered this peak at the age of 14 years in 1963.

During the mid-sixties I climbed it with friends a total of 11 times.

My climbing companion for the first and many other climbs was Eugene Southwick. We did this in a fit of jealousy because our brothers Andrew and Graham had climbed it earlier in 1960 and 1961.

Others included several of my school mates at Marist Brothers High School including Wadan Narsey and Rodney Samuels. I was a willing unpaid guide for members of the Fiji Rucksack Club. None of them came back for a second attempt.

We tried to scale the peak on the steep side, but like Sir Edmund Hillary before us (during WWII), we failed. The cliff face curves outward and it may be impossible to scale. We followed the rusted steel pitons that Hillary had driven into the rock face.

We stopped where he stopped, to go on would have been suicidal. There are caves on the cliff face. These were formed by huge gas bubbles in the lava flow when the thumb was actually the vent of a volcano. In these caves, human remains were found, and were given to the Fiji Museum. We camped in a cave under a gigantic boulder that had split off the cliff face on the north side. Joske’s was only one peak of dozens that we climbed in the sixties. Our strange aim was to climb every peak on Viti Levu, and raft every river. We conquered the Medrausucu peak in Waimaro. Our companion was Fiji rugby rep. Apenisa Tokairavua.

We failed to scale the highest peak in the Korobasabasaga Range in Namosi, stopping 50m short of the summit. We were there with Sam Levu as guide during the rains that brought the worst flooding of the Rewa River. This peak may be impossible to climb. The only other peak that defeated us was Natodra in Magodro. I was privileged to see the interior in a truly pristine state, which explains why I cannot now return to these places.

It is time to declare and patrol a national forest park around Joske’s Thumb or Rama peak and other areas of outstanding biodiversity and natural beauty, especially in Namosi province . These adventures prepared me for the dangers of a different kind in fighting the pine forest fires and housing the homeless.

I was relieved when World Rugby made the decision to award our ‘Little’ Master the Best Sevens Player Award for 2019.

Of course, Jerry deserved the award as he led Fiji to five back-to-back tournaments and the overall WRSS title.

Jerry’s opponents (Folau Niua and Stephen Tomasin) in the Eagle colours had done so much for the Eagles but Jerry was a little too classy for them and after finishing behind Perry Baker in 2017 and 2018 Jerry finally was acknowledged by World Rugby. Hence, Jerry became Fiji’s second player after Samisoni Viriviri to be crowned the best sevens player.

Semi Kuntani and Osea Kolinisau missed the cut in 2015 and 2016 as they finished behind Blizbokke duo Werner Kok and Seabelo Senatla respectively. On the other hand, congratulations to South Africa for completing a hat-trick at the awards! Pieter-Steph du Toit was crowned Player of the Year, Rassie Erasmus was named Best Coach and the Springboks winning team was awarded Team of the Year.

TJ Perenara walked away with the Try of the Year, French hero Romain Ntamack received the Breakthrough Player of the Year while English referee Wayne Barnes deservedly got the Best Referee Award. Thus, our nippy half back has added another cap to his glorious career! On behalf of my family, I wish our ‘Little’ Master all the best.

After New Zealand lost, I lost interest in the final and told my children not to wake me up when the final started. I had been drinking grog at around 2pm on the day of the final. I said that England and South Africa would play a boring conservative game.

Oh how wrong I was. Five minutes for the game to start, I woke up with a start and joined my children in the sitting room. The first 15 minutes prompted me to run and buy some more grog. South Africa’s defence is what won them the game.

What England did to the All Blacks, the rest is history. Congratulations to the Springboks, you created history and broke that curse that a team that lost in pool play never won the final.

May we never forget

Lest we forget! Those who made the ultimate sacrifice.

For with their lives they paid the highest price. In the theatres of war around the world. They were men and women of valour and were bold. They fought and paid for the freedom we have today.

So that in the end we did not have to pay.

So when the sun sets and rises the next day. Their sacrifice we shall fondly remember. Every year in the month of November. Lest we forget! As we live our lives wrapped in our daily struggles. Stop to appreciate those who died for us in those battles.

May we never ever forget.

Our Prime Minister Voreqe Bainimarama stated that corporal punishment will never be brought back into our education system (FT 04/11). I believe if our Prime Minister is a true Christian then he should know very well that if we spare the rod we risk to spoil the child for he who spares the rod hates his son, but he who loves him is careful to discipline him.

Whether at home or at school, we need not withhold discipline from a child, for if we punish him with a rod, he will not die.

If our Prime Minister is still adamant against corporal punishment then we need to do as the Japanese education system is doing in teaching their children manners before knowledge. The first three years of school is not to judge the child’s knowledge or learning, but to establish good manners and to develop their character.

Children are taught to respect other people and to be gentle to animals and nature. They also learn how to be generous, compassionate, and empathetic. They are also taught qualities like grit, self-control, and justice.

Nothing is working at present and our Prime Minister needs to do something about it for we are falling apart as a society and a nation. Get the basics right and that includes disciplining our children whether by learning or by the rod!

This is an annual event involving the growing of moustaches during the month of November to raise awareness of men’s health issues, such as prostate cancer, testicular cancer, and men’s suicide. The Movember Foundation runs the Movember charity event, to raise money to fight the cause.

The goal of Movember is to “change the face of men’s health”. By encouraging men (whom the charity refers to as “Mo Bros”) to get involved, Movember aims to increase early cancer detection, diagnosis and effective treatments, and ultimately reduce the number of preventable deaths. Besides annual check-ups, the Movember Foundation encourages men to be aware of family history of cancer and to adopt a healthier lifestyle.

Movember is an incredible way to break the silence and stigma surrounding men’s health on a global scale. Some facts on Movember: The King of Hearts is the only king in a deck of cards without a moustache.

According to Guinness World Records, Ram Singh Chauhan holds the record for longest moustache, spanning 14 feet long. He has been growing it since 1982, after a friend with a 7-foot-long moustache suggested it.

Support a good cause and wishing you best for this Movemeber.