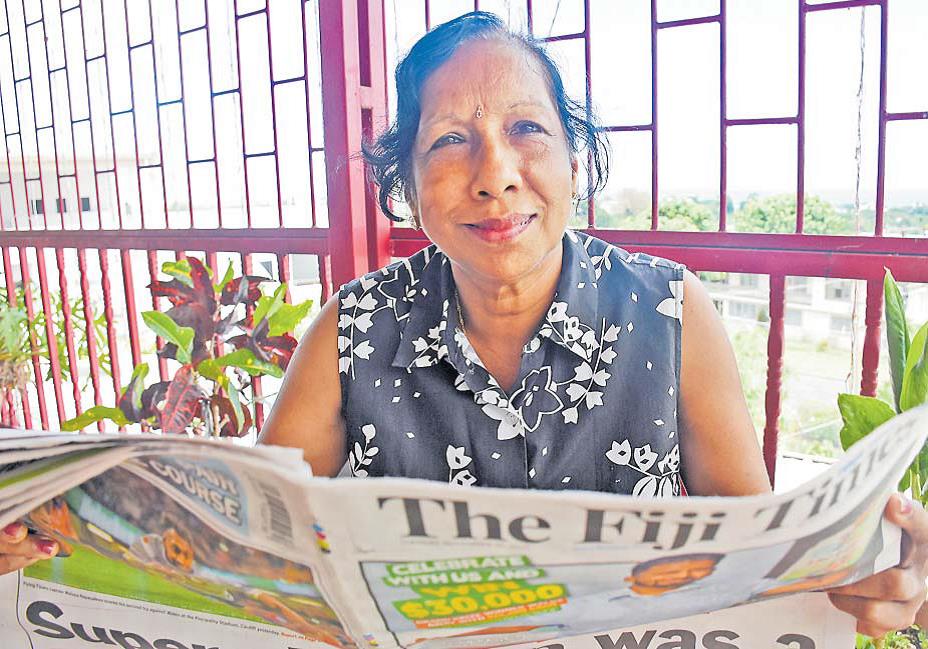 Pushpa Nandan reads the Fiji Times at her home in Simla, Lautoka. She is one of the 20 winners of The Fiji Times 152nd anniversary celebration October draw. Picture: REINAL CHAND

PUSHPA Nandan, who starts her day with The Fiji Times because she is an avid reader, shared that she has been reading the newspaper for a very long time for its fair and balanced reporting of the news.

Part of the $152 would be spent on Christmas and part would be used in future.

Mrs Nandan urged young Fijians to develop an interest in reading The Fiji Times to keep themselves informed.

A timely advice from someone who has been part of The Fiji Times family for many years!

I WAS shocked to discover that the National Fire Authority (NFA) does not have the power to report or prosecute offenders for burning toxic materials in their compounds during the night or at any time, for that matter.

Recently, I made a call to the NFA to report a fire burning at night near my residence.

It produced so much smoke that it set-off the fire detector.

I complained about the fumes and how, often, there are night fires where rubbish is burnt and the toxic smoke is that strong that it causes one to choke.

The officer with whom I spoke made the point several times that I would need to contact the police to report such matters.

The only action the NFA can take is to ask the offending residents to extinguish the fire.

They will not report any fire to the police unless there is injury or death.

I mentioned the injury to my respiratory system but it seemed that didn’t count.

I felt sorry for my pug whose breathing is compromised at the best of times with his snub nose due to breeding.

When it is all said and done, NFA doesn’t have the power to even report a fire or refer the matter to the police.

The onus is on the public to do this.

I feel it makes a farce of the term ‘authority’.

Why has the side’s performance suddenly plummeted?

Isn’t it time for the association to urgently convene a full board meeting to address what needs addressing before it
is too late?

As a morale booster, please show your support to the coach and players by being physically present when the team is training at the ground.

Set your goals and work towards achieving them which is only possible if your footing is unshaken.

Leave differences, if any, aside, and work for the purpose you are there for.

Any obstacle should immediately be removed.

Come on Nadi fans, speak up before more damage is done.

We want to see our football club delivering the goods it is capable of delivering.

SIMON wants iTaukei political parties to be inclusive of “kailomas” for greater prosperity of the nation (FT 22/11).

Good luck with that.

I believe it would be difficult and somewhat intolerable for governing indigenous parties to embrace kailomas or other minorities in the decisionmaking process, let alone being led by them.

Since 1987, I believe certain iTaukei leaders have always harboured a phobia of ethnic minorities attempting to undermine their “rights” or snatch their land and natural resources (land grab).

Or as a loyal devotee of the ruling FF party, he can alternatively join them.

OUR boys have not had a home game in a decent stadium for over five years now and yet they are playing like true champs on any soil.

The new-look Ba side is very promising and entertaining to watch.

Home crowd is always a morale booster for any team.

I wish our stadium is ready soon so these boys start having much support as they used to have.

I AM fl abbergasted and absolutely appalled by the letter from that guy in Rava Estate, Savusavu (FT 22/11) who seems to think it is OK to have a political party based on ethnicity as long as they include the “kailoma” only because
they are close relatives.

The message seems to suggest not to include the other ethnic groups because only the iTaukei should be in government.

He seems to suggest that a multi-ethnic political party is not the way to go.

The thought of joining a multi-ethnic party does not appear to have crossed his mind.

Perhaps the COVID virus has rewired his mental state for the worse – I am only speculating.

Based on his logic, it would appear he is very pleased with what is happening in the FRU.

Whilst the theme of his letter seems to suggest that the “kailoma” are treated as second class, because they
have only half the same blood, I would think the Indo-Fijians would come in a close third class in that case, if you go with his logic.

I believe the Indo-Fijians are way behind as only an after-thought.

And I am sure I am the only one who finds his letter appalling.

So, what does that tell you?

Maybe he needs to get away from Savusavu for a while to clear his head.

Or maybe he should change the formula of his “mix”.

I am just trying to understand and assist.

But, in the end, I fully support his right to his opinions.

Just do not teach it to your kids or your grandchildren please.

WITH new laws implemented nowadays, will our law enforcement agencies be able to cope and enforce it?

Face masks are one of the most littered item on our streets nowadays.

And I haven’t heard anyone been charged for it.

So much of masking up, aye!

AS I had suspected all along, the problems in SODELPA are not the fault of its leaders and its members, it is all the fault of their party constitution.

Fix the constitution and all problems will be resolved!

Why didn’t people see what was in plain sight all along?

If the incident occurred due to negligence of hospital personnel, then some form of compensation should be considered to both the parents.

On the same note, I wonder how many other similar cases may have happened where children may have
accidentally ended in the wrong homes especially within thesame ethnicity?

That probability cannot be ruled out.

WHAT is next and who is next?

JAN Nissar of NSW tells us “what would be even more interesting is if the editor printed more of my letters” (FT 22/11).

I personally would prefer more of another NSW writer Altauf Chand’s letters to be printed.

His letters are the reflections of a critical thinker and not a selfabsorbed one (see his ‘Kava diplomacy’
FT 22/11 for example).

SUKHA Singh (FT 22/11), I think in this matter, the compensation has already come from above for the error made on Earth.

The value of that compensation cannot be matched by all bank accounts combined.

THE parents of the two boys who were switched at birth should be awarded some kinda recognition.

And it would be nice is a story of Asif could be done, if they agree.

THIS is not the first high profile resignation in recent time but the Electoral Commission chairman’s sudden resignation has also been described as a shocker.

At this stage, it is still a developing story and I think the days ahead will reveal how high the voltage really is.

I WRITE in response to an article on the above published in your newspaper of yesterday’s date.

I wish to counter a comment made by Annette Owttrim, CEO of Aspen Medical and Health Care (Fiji).

In the article she stated “surgeons will be upskilled so no longer will they have to have a full mastectomy”.

My counter is that it is the oncologist who determines the best option for the patient.

Having only lumps removed cannot guarantee the cancer cells are fully removed.

A miniscule cancer cell can still remain in the breast and this will trigger the return of the cancer – most times more aggressive than the first case.

The oncologist make decision on options based on their inspection of the patient’s lymph nodes and the stage of the cancer.

The patient should be told of the effects of a partial mastectomy as compared to a full mastectomy.

Quite often the patient will refuse a full mastectomy because of their modesty.

A lot of women often fear that their husband will leave them because they either have only 1 breast or none
at all.

I also heard stories of husbands refusing to have sex with their wives because the surface of her breast/s could be compared with surface of the moon (craters/crusted scars formed after the lumps have been removed).

With removal of lumps, there could be instances of the cancer recurring and thus will cause the patient to incur
more costs for another operation.

Finally, my wife had a full mastectomy in 1998 after she was diagnosed with Stage 3 breast cancer and is still
alive today.

RECRUITING medical specialists from overseas (FT 22/10), including nurses and paramedics, coincides with a massive shortage of nurses here in Australia due in part to them quitting the profession in droves due to COVID-19 “burn out”.

Even here in Perth, Western Australia, where we’ve been virtually COVID-free, unlike eastern states, hospitals have reached crisis point, elective surgeries are postponed, patients await treatment for hours and get inadequately treated, while ambulances take their turn in ramps to unload people.

LABEL it Pinktober or Movember

All have to do with cancer

Forms vary when known leaves one to

So be bold and don’t let time be wasted

Unzipping to urinate privately or publicly

And for other reasons unknown

Shyness is not shown

Then why the reluctance to open

Verbally and physically for reasons

One has to be mentally strong

Why resist when symptoms persist.