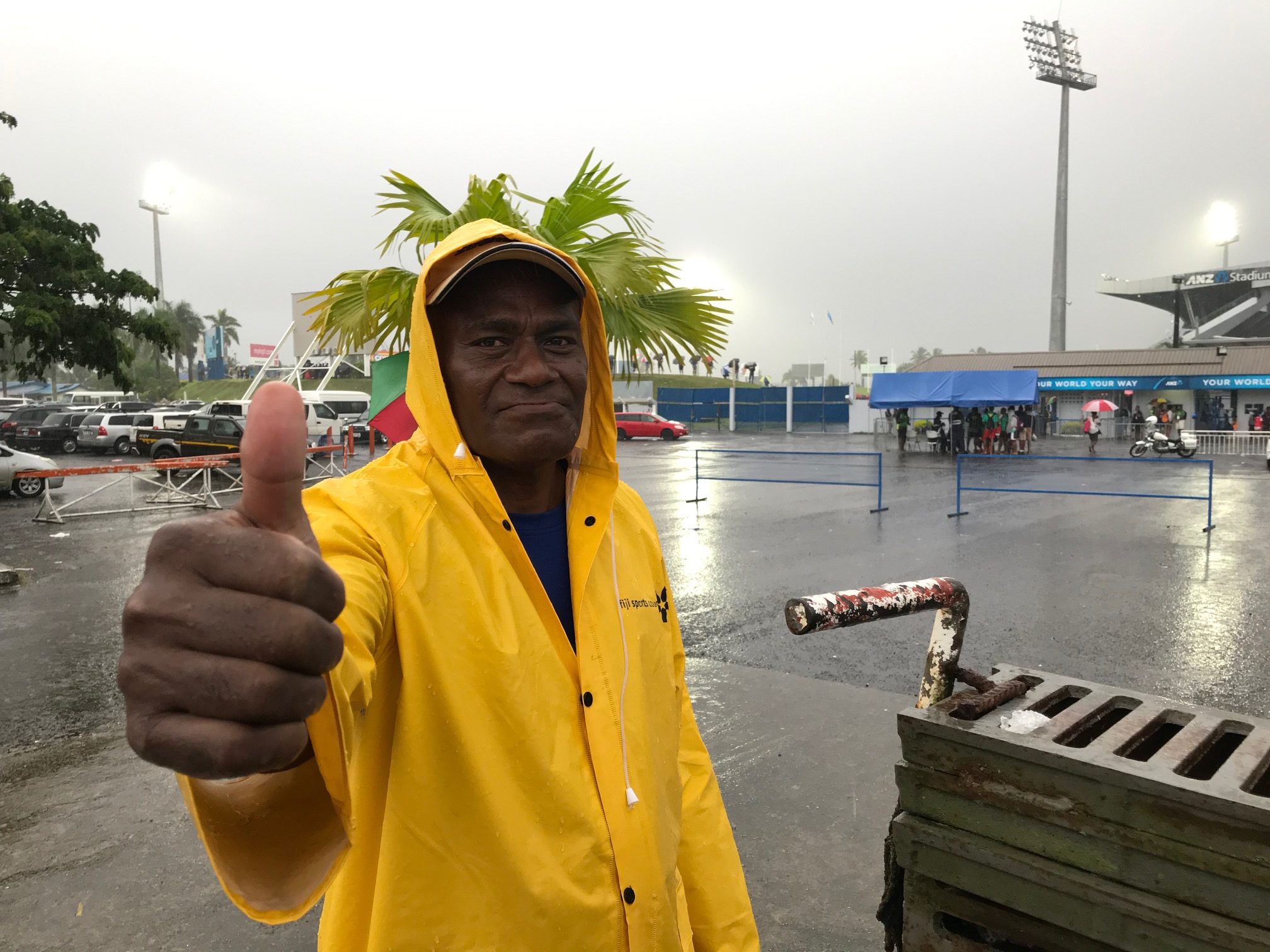 Fiji Sports Council security officer Sekove Tulele goes about his day, armed with his raincoat and his smile despite the heavy downpour in the capital Suva.Picture: JOVESA NAISUA

I LIKE the people at the weather office. They have gotten it right, when they say look out it will rain, it rains.

The weather has been unpredictable and I think it can be seen in the stop/-start that has been going on all weekend.

It’s like someone in the sky is turning the rain tap on and off. But top marks to our weathermen and women.

A FEW weeks back I watched an interview with former Flying Fijian and Lion tamer Pio “Bosco” Tikoisuva on the popular program on Mai TV about rugby.

Now what intrigued me was how this loyal servant of Fiji viewed life and how we should approach it, his philosophy was “if you have to do something, do it right and from the heart, the rewards will follow suit” or better still “in whatever job you do, do it to the best of your ability and give a 100 per cent all the time, to be honest in all endeavors” and that to me epitomises life’s greatest questions.

Now I’m not an expert on life issues, but it seems to me if we were to at least take a page, a line or whatever from this quote, it will go a long way in making our country great again.

But hey, what do I know right, I’m just the common man.

ON behalf of the 2013 former scholars of Assemblies of God High School and the staff members, I accord a big vinaka vakalevu to The Fiji Times for running an article titled “Home treat” (F/T 11/11).

The article was about the welcoming ceremony of a proud former scholar of AOG High, Meli Kolinisau, who was part of the 2013 U-18 rugby team that lost to QVS in the semis.

The then AOG High U-18 team was coached by the late Eroni Vereivalu and managed by Mr John Levy, Mr Underwood and myself.

The boys made headlines after a rock solid performance in the southern zone. Meli was a vital member of that team which also had the likes of Rovick Tolo, Vaisea Korieta, Mosese Fonorito, Malakai Vitukawalu, Sitiveni Gukilakeba, Eroni Moce, Peni Qusa, Manasa, Alipate, William Tailor, Seveci Nakailagi, Paulo, Ravaele Raituku, and Manoa Gadei (the son of the current Land Forces Commander). Meli comes from a humble background and he had exemplary behaviour on and off the field.

As his English teacher, I am proud that he is flying Fiji’s flag for the NZ Heartland team. I’m confident that Meli will hit top deck with his discipline, dedication and commitment and I hope to see him don the Flying Fijians jumper.

My best wishes to Meli and I thank his mum Amelia for nurturing him to high standards. Thank you Meli for making AOG High School proud!

I BELIEVE a woman or a child who has been raped does not have the chance to undo the nightmare.

It will continue to haunt her, it will make her paranoid, it will frighten her.

Some believe that rapists don’t deserve a second chance.

Once their guilt is proven beyond doubt, they should be locked up and the key thrown away.

This debate has always made me think, do rapists deserve a second chance?

I believe everyone needs a second chance in life but how do we deal with this very sensitive issue.

In the aftermath of a sexual assault or rape, survivors can face extremely difficult and painful emotions and experiences.

The long-term psychological and physical effects of the experience I believe are devastating.

As a society we hold on to the hope that people can be rehabilitated because we know that even a 15-year sentence means they will eventually come out one day, and it’s about trying to ensure that when they do, the community at large is still protected.

The question then arises, does the Fiji Corrections Service have the expertise in dealing with sexual offenders.

I KNOW people are being fined for littering.

Here is a suggestion, don’t fine them. Get them to go and pick up rubbish at the bus stand or a public place as penalty.

AFTER reading about Nukulau Island’s eventful history in The Sunday Times (10/11), I found it quite ironical, that if it was not for the fiery mishap and looting that occurred on the island during one of the July 4 American Independence Day celebrations in 1850s, we would not have had the British heritage we have today.

That was one small event that changed the fate of our nation.

I MUST say I was really disappointed with Fiji’s loss in the tournament.

It should have been an easy one. Oh well, I guess there are no guarantees in life.

So how was success measured?

Was it based on the eloquence of the official State presenters?

Or, was it based on the ground realities of the human rights regime in post-coup Fiji?

AGAIN,Energy Fiji Ltd sending media information that electricity will be switched off in Korolevu at 9pm tonight (Sunday night) and other areas.

Why can’t they do this during the day.

Is it a game plan to switch power off on Sunday nights only?

For the past few weeks, I believe this is a routine from EFL.

Stop this habit. Think of the poor and elderly people at least please.

Switch it off during the day to ease the problem.