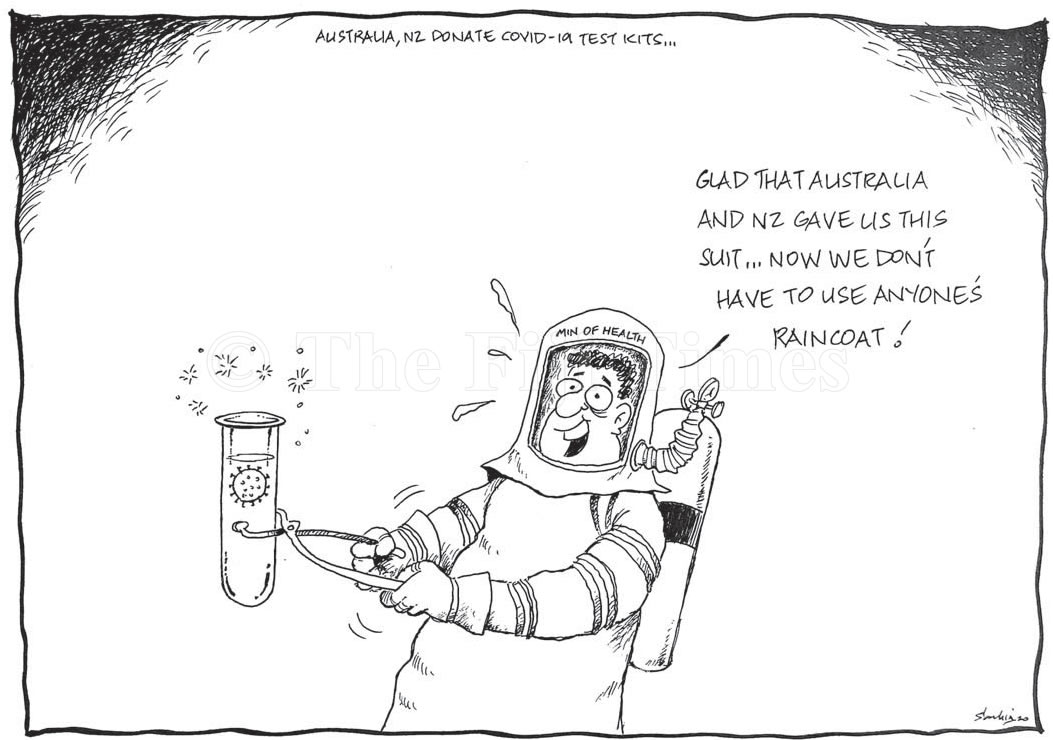 People page story
The powerful People page report in The Fiji Times (19/05) is more than power, being resilient and a true Viti never say die focus. Just look at Ateca’s photo, full of vision and sacrifi ce. The COVID-19 pandemic has had a big impact in the career decision- making of our young generation and one such person is Ateca Waikere. She has lost her national toppers scholarship after switching to a defi ant focus on becoming a doctor. I am sure the pandemic will bring that added passion breathing and living desire to help the needy and sickly. Support by her family, her mother in particular is power and not having a scholarship and pursuing her dream at the expense of her parents is mana magic. Who would do this? Vinaka Ateca joka dina the Kadavu woman has only one thing in her mind, to pursue a doctor’s career and give something back to Viti and especially Kadavu which was battered and live stories on cyclones and NCD issues that Ateca has in her mind to fi ght until the end, noqu qele, noqu vanua. This is Viti the way the world should see and so power packed talanoa and veilomani, vinaka The Fiji Times, total mana magic 100 per cent where you will read this type of stories? All the best Ateca, you have already won the halfway battle… go for gold… joka dina!
SHALWYN PRASAD Mukta Ben Place, Nabua

Food issue
Fiji imports a wide variety of food items. Some are not found locally while others supplement what is already available in the local market. If we were to ever have an extensive study to compare the selling prices of local and imported food commodities of the same type in our domestic market, I think the revelations will shock us. Which is the cheaper alternative, locally produced or imported food commodities of the same type?
MOHAMMED IMRAZ JANIF Natabua, Lautoka

Human touch
I believe the recent pronouncement by the HART chief executive offi cer that no visitors are allowed into the HART villages is very disheartening. I have due respect for the policy that is in place which prohibits visitors entering the HART villages but remember these are extraordinary times. It is about giving a human touch to what we can offer to the most vulnerable. I am sure what heartfelt feeling it is going to evoke both by the person giving and taking when the visitors actually go and sit down and share a few words of encouragement. This is, in my lifetime, humanity’s darkest hour and a big threat to the whole world. What is required from us is to stand united and protect the most vulnerable of our fellow citizens on this planet. This crisis has upended many things including our own lives. My humble plea to the authorities, rethink about this policy and if possible please turn it around.
PRANIL RAM Votualevu, Nadi

River crossing
When I saw The Fiji Times photo of Ratu Jese Senivutu Tuisuva crossing the cold and swift fl owing Wainimala River to get his farm produce to market, I thought that’s not right. Not in a country where government ministers drive around in fully loaded fourwheel- drives. I believe the photo exposes our urban bias in development. Rural communities often miss out on the fruits of national development and national wealth. That shouldn’t be the case. There is a need for a more even development spread to reach rural communities and to better their living standards and quality of life.
RAJEND NAIDU Sydney, Australia (PS: I have myself crossed that river during my government team tour to remote rural communities when I worked as a welfare offi cer in Fiji)

Credible information
Another reason the issue of decriminalisation of marijuana is coming up is the internet. 40 years ago when I was born there was no internet in Fiji. Fast forward to 2020 and a universe of knowledge is at our fingertips. There has never been a time in history when incalculable amount of knowledge and information are at our service. If we didn’t see on the net that other countries have found medical benefits than we could argue. This unprecedented time in mankind’s history has been largely fueled by the immediate availability of credible information. I believe people are learning more and more about their rights and the tide is turning. Public opinion will eventually shift and eventually we will see changes. The truth is being found by people because of the internet. The truth is like a lion. Set it free and it will defend itself.
RUSSELL FONG Kapadia Pl, Raiwai, Suva

Bonus pay
Some writers have supported the call for payment of bonus to our medical professionals for their tireless work and tremendous effort in preventing the spread of COVID-19 virus. While I agree that they do deserve some form of reward for a job well done I believe this is not the time to talk about bonus. The whole nation is going through a crisis. There are people out there who have lost their jobs and some are on reduced pay. They are facing extreme hardship in making ends meet. Some of them are struggling to put food on the table for their families. Our priority right now should be to reach out to help them to feed their families. Many good Samaritans distributing food packs have highlighted the plight of these desperate people. I am sure our doctors and nurses would not mind if the same money is diverted towards assisting the poor and the hungry. They are the most needy ones.
SELWA NANDAN Lautoka

payment, so that a receipt can be issued to you.
Food and lockdowns
Work the land TO ultimately survive we must eat and to eat we need food and to have food we need to cultivate arable land by plowing and sowing and raising crops. Livestock husbandry as well is a must. If there is one industry that we need to invest in heavily it is horticulture and agriculture as it is a sector which provides our basic needs and the industry that should become our economic backbone. While tourism has been our largest foreign exchange earner it is a fragile, high-risk sector to rely on. We have been taught a great lesson that agriculture, and not tourism, is where we need to be focusing our efforts. The benefi ts of agriculture and horticulture is extremely positive in many ways. We can be producing more than enough healthy, organic foods, get all the exercise we need, while at the same time, become stronger, reliable, responsible citizens. With our tropical climate we should be producing an endless supply of tropical and sub-tropical fruits and vegetables and livestock. So much vacant, arable land lying idle that needs to either be cultivated or used for raising livestock. Focus and invest in food!
SIMON HAZELMAN Rava Estate, Savusavu

Positive outcome
Well of course almost everything these days is related to COVID-19. However, this virus has somewhat brought some positive outcomes if evaluated nicely. While lockdowns in many areas across Fiji have been lifted, many countries in the world are still under strict rule implementations. Mother Earth was recovering as there was and is less pollution in all areas. Factory close-down and less usage of machinery has signifi cantly improved the atmosphere around many populated cities. Staying at home, around your loved ones certainly does improve relations within folks and creates more understanding and most importantly greater commitment for each other. Many people oversaw their family members and gave more importance to work and outside the kin friends and these lockdown periods must have done wonders to bind the relations tighter. Moreover, many people tend to have discovered new talents and interests during this period of time. Some have learnt to cook, some have found passion in writing poems or personal literature work, some engaging into community or charity work, assisting those in need of basic supplies during this time of plight and also facing the effects of TC Harold. There are also people who have found the true meaning of life and ways to improve their mental health with happiness and positivism. We will fi nd many motivated souls and also some daunted ones, but let us realise the fact that time is neither anyone’s friend nor enemy. It is where it is supposed to be. If one counts this as a blessing then probably they will start appreciating people and human life more than the man-made technology. One will recognise themselves worth more than anyone else’s opinions about them. This is the time to perceive what human life is all about.
RAYNAV CHAND Nakasi

May 19
The date May 19 (just like May 14) brings many painful memories. On May 14, 1987 a military coup was carried out while on May 19, 2000 a civilian coup was carried out. Both had a negative impact on our economy and the lives of our citizens. I did not feel the 1987 military coup but as a form seven student I felt the full brunt of the 2000 coup. Schools were closed for almost two months and our studies were affected but we managed the diffi cult crisis. The date May 19 remains signifi cant!
RAJNESH ISHWAR LINGAM Nadawa, Nasinu

Spot on
I believe Jean Hatch (FT 19/5) is spot on in saying to the HART overseers “Stop the degradation and dehumanising policies”. The policies are indeed “outmoded” and I suspect in contravention of the residents’ constitutional rights as citizens. I believe the policies amount to penalising the poor. There should be an independent review of the existing HART regime to ensure the poor who live there live in human dignity with their rights protected.
RAJEND NAIDU Sydney, Australia

Swimming pool
Did I just see in the media, that a swimming pool is to be constructed in another municipality, if so, then I trust the lessons of the “other” project, will be taken into consideration…se cava Scribe, Noji and Pintu.
NIGEL FIU Owls Perch, Lautoka

Oh boy
Reviewing our past and at the same time also trying to study the present and then forecasting the future, I just told myself, “Oh boy!”. Maybe I am just too pessimistic but when one marries the past and the present, the offspring is the future, right? Isa o keda!
JOELI NALECA Natabua, Lautoka

MP allowance
Just a thought that all 51 members in Parliament should stop having allowances to minimise expenses. They are already earning way much more if we compare this with a normal wage earner. J
AHEED BUKSH Korolevu, Sigatoka

State help
I believe the lack of government assistance to those who have lost their jobs, working under reduced rates or waiting for things to normalise without wages is not because they don’t have the ability to help. I believe it’s a silent call to the resilient citizens to see what they can do for their country.
DAN URAI Lautoka