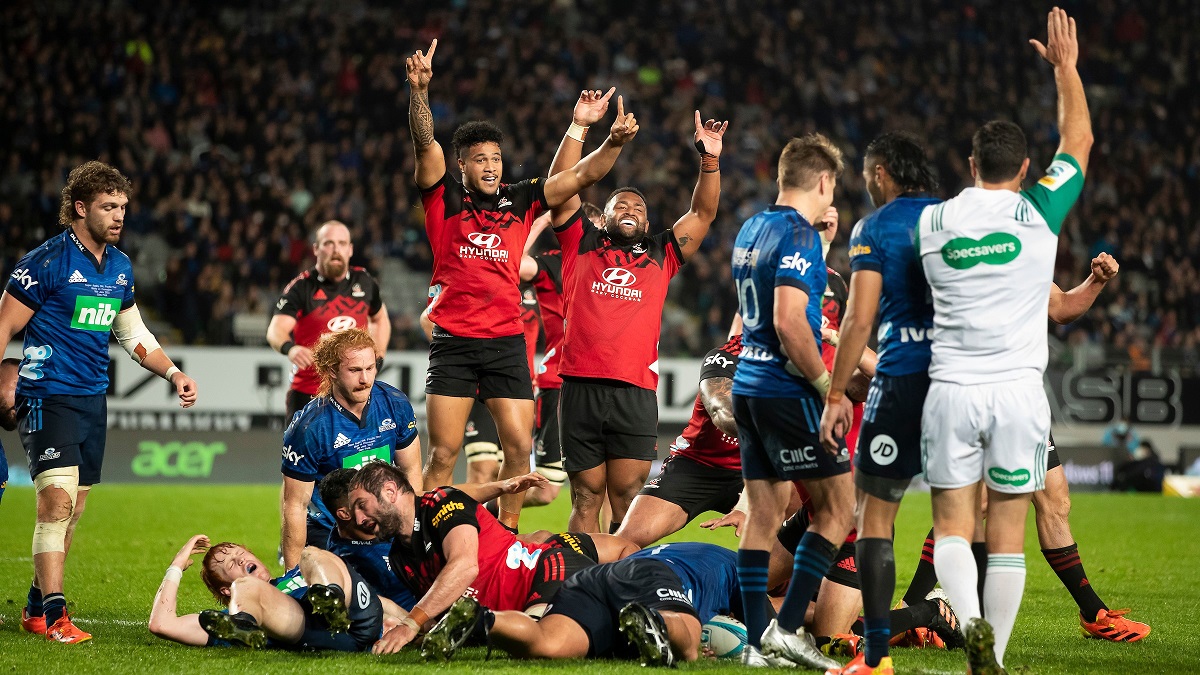 Action between the Crusaders and the Blues at Eden Park. Picture: 1NEWS/Twitter page

The Crusaders strangled the ladder-topping Blues with a ruthless display of power rugby to win the Super Rugby Pacific final, claiming a record-extending 11th crown. The powerhouse snapped the Blues 15-match winning streak as they dominated the final at a rain-soaked and sold-out Fortress. Bryn Hall and Sevu Reece scored tries, while Richie Mo’unga ran the game with a brilliant display, contributing 11 points from his boot. The Blues, roared on by a big home crowd, were simply unable to get on the front foot and unleash their talented backs until it was too late. Finlay Christie gave them a sniff of hope with an opportunist try, but a defensive mix-up gifted Reece a try to put the result beyond doubt. The Blues were dominant in round-robin play-offs and looked to usurp the Crusaders, but looked shell-shocked at the contest’s intensity. The Crusaders deserved the title as they hammered the Blues and dismantled their set-pieces. Robertson’s traditional celebration dance summed up the mood in the Crusaders camp! RAJNESH ISHWAR LINGAM, Nadawa, Nasinu

The Raralevu Gas Crematorium was officially opened by Fortech Construction founder Ram Rati on Sunday, June 19, 2022 in the presence of a large crowd. This was a culmination of years of planning, sacrifice and hard work of a group of dedicated people. Thus proving that nothing was impossible where people are determined and focused. Apart from the major donors (local and overseas), the key ground workers such as the president Ratnesh Kumar who was strongly supported by project manager Vishwa Nair, the managing director of Delta Timber and the fund raising chairman Ajay Prasad. These people spent days and nights at the site. The delay caused by the COVID-19 pandemic did not deter them. As a result of this kind of commitment, today Fiji has seen the largest modern state-of-the-art crematorium with three cremation chambers and a seating capacity of 600 people. It has absolutely modern toilet facilities and a huge parking space. During discussion with the committee members I discovered that the committee has plans to expand the seating capacity and to build a morgue on the site. This will save the people all the trouble they currently face in finding space to keep bodies. The current situation is despicable! At Raralevu Gas Crematorium people will have to pay just $700 to cremate their loved ones. The road to the crematorium is tarsealed. Therefore, it is easy to reach there. The entire Suva-Nausori corridor can take advantage of this facility. This project is a trendsetter and more of the type should be built in other populated areas so that the huge pressure on our forests and mangrove swamps is lessened. It will definitely help in our climate mitigation process. Dewan Chand Donu Place, Namadi Heights, Suva

In my opinion, judging from the league and Fiji FACT performance, the recent outing of Lautoka football team in the OFC qualifier was dismal. A draw in the first leg and getting thrashed 4-nil in the second was unexpected from the defending league champions who were riding high on the back of some impressive performances leading up to this series. I believe what went wrong was the quest for short-term glory for the team as it was counterproductive. Plans to include players from our neighbouring countries in the team for only a short span of time did not seem to go well in getting the combination right. In my honest opinion, Lautoka would have done much better by including their home grown players. Lautoka’s 4-nil thrashing reminds me of England’s 4-nil loss to Hungary in the recent UEFA nations league tournament and as how the English coach Gareth Southgate boldly took the blame on himself stating the reasons for the loss. Whatever the reasons! Perhaps, best known to the Lautoka officials, for now the loss is a stark reminder and a football lesson to all the teams that short-term glory can sometimes be agonising. Pranil Ram Votualevu, Nadi

Ugh! Plastics and bottles lying around the streets after being disposed by market vendors. Banana peelings laying waste among the wet footpaths of Suva. Fish scales and guts thrown everywhere at the Suva fish market. Cans and bottles sitting on the corners of every streets. Peanut packs and empty wrappers of snacks strolling along the Suva bus stand and people ignoring this every day and never a single day they care? Kelepi Dakuiyaco Waikalou, Serua

“Make love, not war.” Nicely printed at the back of a car and it made my day the other day as I was travelling back to the West. Is it possible? Yes, only by coming together despite our differences. Se cava? Joeli Naleca Natabua, Lautoka

It seems like the Crusaders do not know how to lose finals and have come back to their Super Rugby dominance after winning this year’s competition. As Crusaders fans, we could not have asked for anything more. Auckland Blues could not match the firepower in the final and it was the Crusaders who wanted it more and came out victors in the end. A sublime performance and one to remember for many years. Crusaders, you are the true champions and deserve it more than any other team! Pranil Ram Votualevu, Nadi

Does Courts Samabula have any plans to install a lift to cater for the general population of our country? Talk about social responsibility. Yes, or no Courts? Asish Vinay Prasad Park Rd, Raiwasa, Suva

I believe the Government has unfairly forced a lot of FNPF members with credit balances to withdraw their savings for COVID-19 relief while unfairly assisting those with nil balances. Does this look like a level playing field? I hope another government will work towards reimbursing some or all of such funds withdrawn and restore retrospectively all benefits lost as a result of having nil balance. Ajai Kumar Nadi |