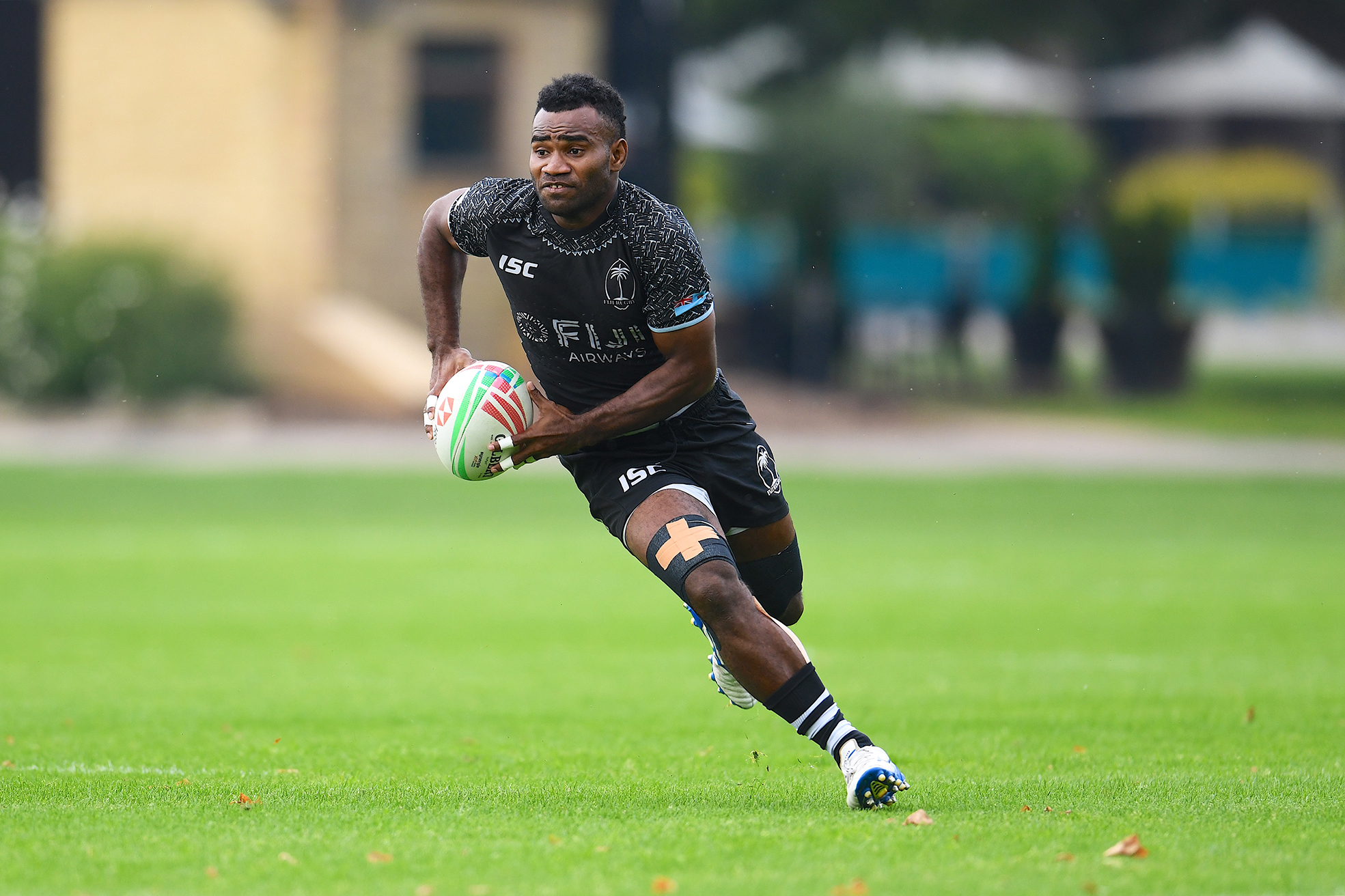 Commentator Karl Te Nana paid tribute to Jerry’s act, class and winning capability and said he wondered if there was another Fijian who could equal or match Jerry’s remarkable feat.

I salute our “Little Master” for steering our ship on the WRSS circuit and for being the orchestrator and motivator in our famous victories on the 7s scene.

Since making his debut on the international scene in 2014 (Gold Coast 7s), Jerry has played 265 games and scored 120 tries — five shy of Naitasiri hit-man Nasoni Roko.

Vinaka vakalevu Jerry for your outrageous and uncanny delivery!

THE focus on child protection in Monday’s paper was important.

It is great to see representatives from 12 Pacific countries gathering to address this issue.

The piece emphasised the role of the family in protecting children.

Families, however they are made up, are the most important provider of love and care to children.

But they are also affected by structural issues.

Parents and carers are making decisions on caring for their children based on a range of structural issues including: the availability of childcare, rates of pay, and situations of violence that they may face.

Businesses and the Government have a role to play in these areas too — not just the role of the State in removing children from harmful situations that was outlined.

The recent launch of IFC’s “Business Case for Employer Supported Childcare”, also featured in your paper, makes valuable points about the lack of availability of childcare and how businesses can respond.

I believe our children will be safer if each party (families, business and government) work together.

IT was a super weekend of sports entertainment as three major global events came to dramatic conclusions.

First up was the UEFA Champions League final between Liverpool and Tottenham Hotspurs. Liverpool was crowned champion of Europe for the first time since 2005 courtesy of a second-minute Mohammed Salah penalty and a late Divock Origi goal.

Tottenham Hotspurs had plenty of possession with eight shots on target compared with three for Liverpool, however, the game did not live up to expectations.

The fireworks were missing especially from Liverpool’s perspective where the trio of Mohammed Salah, Sadio Mane and Roberto Firmino remained silent and out of sorts for long periods of play.

Liverpool fans will nevertheless rejoice in victory as they still managed to score two goals.

Perhaps the script changed after the early Liverpool goal which promoted them to sit back and control the game instead of opening it up and taking risk.

It was a bitter pill to swallow for all Manchester United fans but as soccer fans, we must congratulate Liverpool and Jurgen Klopp on their achievement.

Secondly, the Fiji 7s team achieved what it had never managed before.

They won on consecutive weekends for the very first time and in the process, clinched their fourth series title.

It was our tenth title in the past 17 events.

Thank you Gareth Baber and the boys for the tremendous effort.

Finally, Anthony Joshua suffered his first, dramatic shock defeat of his career against challenger Andy Ruiz Jr after being stopped in the seventh round at Madison Square Garden. Joshua was dropped four times in the fight as the Mexican-American claimed the British boxer’s three world title belts in one of the biggest underdog upsets in heavyweight history.

The upset could be compared with the night in 1990 when the unfavoured Buster Douglas knocked out then-undefeated Mike Tyson in the Tokyo Dome.

Ruiz Jr was given little chance by bookmakers especially after he stepped in at 41 days’ notice after Joshua’s original opponent, Jarrell Miller failed a series of drugs tests.

Ruiz Jr who has been ridiculed at times for his apparent lack of athleticism rose up to the challenge and did what many thought was impossible.

The defeat will be very difficult for Joshua to absorb especially when he was widely touted as the best heavyweight in the world.

He was expected to make short work of Ruiz Jr and set up big money matches against Deontay Wilder and Tyson Fury.

THE ability to off-load the ball in tackles with relative ease was the hallmark of the flying Fijians’ success in the 2018/19 HSBC World Rugby Sevens Series.

In the quarter-final of the Paris 7s, the French were overwhelmed by three Fijian offloads which resulted in one try.

New Zealand tried to ape our style in the final but were predictable.

Fiji won the series despite having one of the highest error counts.

Well, when you have a sound defence, you can afford some horror moments.

COURAGEOUS captain Paula Dranisinikula’s message to our warriors at the break was simple but heart-touching — “If you want to be history-makers, don’t let this moment go.

Inspired by his words and Baber’s magic wand, our boys delivered a massive performance and beat big names such as England, Argentina, Ireland, France, USA and NZ and claimed its fourth WRSS title by beating USA (33-14) in a scintillating semi-final and then added the cherry on top by downing NZ (35-24) in the cup final.

Leading the series by two points over USA and heading into the season-ending tournament, the patriotic Fijians held their nerves at the Stade Jean Bouin to deny “outspoken and animated” Mike Friday’s men their first series title.

On the other hand, Fiji created history by appearing in four finals in a row and in consecutive tournaments and won in Paris for the first time.

Three of our rookies were nominated for the rookie award which was won by Meli Derenalagi while four of our heroes (Botitu, Derenalagi, Tuimaba and Jerry) made the WRSS Dream Team.

Unfortunately, despite the nail-biting affair in France, only Botitu made the Paris Dream Team alongside NZ’s Curry and Knewstubb, USA’s Hughes, South Africa’s Plessis, Kenya’s Amonde and England’s veteran Rodwell.

My former schoolmates Vueti May and Ruci were in Paris and cheered their hearts out like many other passionate Fijians seen on TV.

Thank you very much team Fiji for the beautiful performance to blow apart our opponents especially the over confident Eagles who found our boys too hot to handle!

Thank you for the wonderful win!

WHILE many will be coming to terms with our national 7s team’s victory in Paris and London, coach Gareth Baber may have a headache coming up.

I believe players such as Derenalagi, Botitu and Tuimaba are likely to be snatched or lured by overseas rugby contracts soon.

It will mean some key players departing and Baber having to search again for replacements as well as starting a new combination among the team selected for the next season.

In the meantime, let’s sit back, relax and enjoy our team being declared the overall series winners.

Imagine, they did this despite having to play against teams with annual budgets amounting in the millions.

For now, some of our players will need enough rest and recovery time.

Because I don’t need to elaborate.

To our victorious 7s rugby gladiators, our sincere and heartfelt thanks and deep appreciation for all your immeasurable sacrifices for your sake, families, friends and supporters the whole wide world over plus your own home nation, Fiji.

An awesome welcome on arrival organised by FRU, Government of the day and major sponsors is warranted.

A golden handshake is the least we must offer.

Words are not appropriately adequate enough to express our gratitude and happiness as Fijians.

IT is the second biggest upset in boxing history after Buster Douglas knocked out Mike Tyson.

It was one of the best fights I have seen after a long time.

I just hope Andy Ruiz Jr can keep the heavyweight titles for a long time.

I hope there will be a rematch but Anthony Joshua better keep away from Andy’s punches.

VERY surprisingly, Botitu was the only one chosen for the dream team in the Paris tournament.

Maybe they knew the Fijian boys would be scooping most of the prizes later on in the evening.

All our boys were outstanding in their performance in the London and Paris leg and of course winning the series was just icing on the cake.