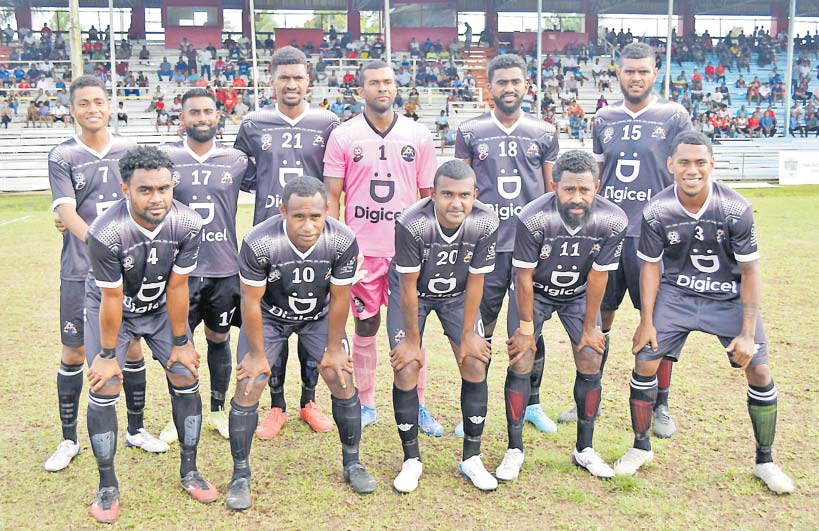 The Ba team before their match against Suva during their Digicel Premier League competition at the Ratu Cakobau Park in Nausori on Sunday. Picture: JONACANI LALAKOBAU

THE men in black were the only ones able to attain maximum points from the last round of the Digicel Premier League (DPL) fixtures played over the weekend.

This was possible after they thumped Suva 3-0 at Ratu Cakobau Park in Nausori.

The boys from the soccer crazy town surprised the Capital City boys with their brilliant performance and ability to score when the opportunity came.

Suva, on the other hand, could not penetrate the solid Ba defence.

This time his players got everything right and stuck to the game plan which gave them the results which their fans had been waiting for a long time.

On the other hand, Suva coach Babs Khan is disappointed that his boys did not deliver.

The loss also means that their winning streak has come to an end.

Now they go back to the drawing board.

For Ba, they must not look back but practise harder to maintain the form they are in at the moment.

All other games played at the weekend ended in draws.

I am sure fans enjoyed the triple header at Ratu Cokobau Park.

Fiji Football Association must carry on with this format as it helps increase ticket sales.

Also, players perform better in the presence of fans.

SOUNDS great; an initiative announced in 2019 by the Ministry of Forestry to plant four million trees in four years.

What about the next initiative announced in 2020: to plant 30 million trees in 15 years.

A figure that has grown significantly.

Then take a drive out of Suva along the Queens Rd.

A government-contracted company has been tasked with the removal of a vast area of mangroves.

It is a sad and ugly sight, indeed.

Has anyone — individual or environment/marine organisation attempted to stop this environmental devastation?

Has no one noticed?

Where did the buck stop?

A silly question but: was an environmental impact study carried out?

Too many questions and few answers yet people drive past there every day.

Are they blind to this?

Someone must care about mangroves.

Travel a little further to Nukuwatu before you reach Lami.

Much time and effort have gone into the mass planting of mangrove seedlings in the shallow waters there.

I just don’t get it.

Can we have some answers, please, from someone?

IF there was a team that saved the best for the last, this would surely describe the Walllabies as they defeated a mighty England team after many years.

The Wallabies started off on a disastrous note as early into the game one of their players was handed a red card.

Early into the second half, it looked like the English side was in full control but that was not to be as the Walllabies put on an excellent performance.

Samu Kerevi and Koroibete provided much leadership on attack as well as defence.

Some of the newer players such as Noah Lolesio played exceptionally well.

This, despite being informed only 10 minutes before kick off that he was replacing an injured Quade Cooper.

All in all, the Wallabies have found their rhythm after being in the doldrums for the past eight years.

As a Wallaby fan, I won’t become over excited with their first performance against England but for now it looks like the men from Down Under are on the rise.

No war in Ukraine

I DON’T know why government ministers keep blaming our problems and our increasing costs on “the war in Ukraine”.

According to the “Russia Today” TV news program broadcast every morning on the government’s own TV station, FBC2, there is no war in Ukraine.

According to that news program on FBC2 TV, the heroic Russian soldiers have been liberating the oppressed people of eastern Ukraine from Nazis, in a special military operation.

I believe no civilians have been targeted or killed by Russians; and the residential buildings that are now in ruins were all bombed by the Ukrainians themselves and then blamed on Russia to get sympathy from the rest of the world.

According to “Russia Today” the stories about a Russian war in Ukraine are all lies being spread by Americans, who actually want to invade Russia and control the whole of Europe.

So it’s strange why our Government ministers keep blaming “the war in Ukraine”, when the government’s own TV station keeps telling us that there is no war.

So who is lying and who is telling the truth?

I HAVE been following the budget consultation that the Attorney-General and Minister for Economy Aiyaz Sayed-Khaiyum is currently doing and I must admit that I seemed confused whether it is actually consultation or campaigning.

THE news that Russia has “detained and transferred to a prison” a second scientist “on suspicion of state treason” (Reuters/The Fiji Times 4/7) reminds me of Stalin era political purges.

I believe that is not surprising because under Putin Russia is again being taken back to Stalin’s dark days.

For Russians who want to put their dark past behind them, this is a crying shame!

THE recent vandalising of Suva graves is disgusting; disrespectful; heartless and downright despicable, to say the least. Some members in our society have zero respect for the dead.

This is most shameful.

How do you “educate” this group of people?

Fiji, is a lot poorer, with these vandals.

LAST Saturday, rugby matches in many grades were played across the nation.

Both games were live on TV.

I wonder if Fiji soccer has the capabilities of doing something similar.

WHY can’t Ukraine just throw the towel against Russia.

IT is terrifying that a bit of good humour ends up in court these days.

When will we get the freedom of speech that developed countries enjoy?

Freedom of speech requires zero investment while the returns are tremendous.

Yet people in power fear this investment.

DO fishermen take with them a measuring tape when going out to catch edible sea creatures?

Past use by date

WITH Israel Falou’s performance against Fiji last weekend, it would appear that he now has the ideal qualifications and experience to join the Mickey Mouse 7s team for Tonga.

We all know that retired, discarded, those that are past their use by date and rejected players make the ideal candidates for that game.

Alternatively, he should do what he does best and that is being preoccupied with fearing God and teaching others to do the same.

Am I correct in saying this record stands to this very day?

If not, please correct me accordingly.

Can Fiji athletes be challenged to take on and shatter this record?

Are there any generous sponsor/s around to incentivise our athletes?

Could the Australian Institute of Sports provide some catalytic motivation please?

Just some food for thought from Jetset Nadi.

SATURDAY was a good day, for Fiji and Samoa.

Their rugby teams were in the groove, to win with big and close scores.

Now we await the second round, in the Pacific Nations Cup, this coming weekend, in Lautoka’s Churchill Park.

Australia A and Tonga, would have learnt from their games.

They will come out much stronger, so as not to lose again.

SINCE Ankols horse is in Lautoka City.

The horse whispered to me, Lautoka has changed a lot.

WITH bated breath, many waited for the July international Tests to kick off, and trust me fans were not disappointed with what unfolded before their eyes.

In the PNC competition, Samoa and Fiji recorded impressive wins over Australia A 31-26 and Tonga 36-0, respectively.

The All Blacks defended their winning run at the Fortress, hammering Ireland 42-19, while the 14-man Australian side beat England 30-28.

The Springboks had to come from behind to defeat the Wales Dragons 32-29, courtesy of a last-minute penalty kick by Damian Willemse.

In provincial rugby, the Stallions hunted down the Rewa side 20-10 in their first Inkk Farebrother Sullivan Trophy challenge, while Naitasiri also recorded a win.

On the other hand, Macuata and Yasawa booked their spot in the top flight and in the final of the Vodafone Vanua Championship after defeating Ba and Bua 19-14 and 21-10, respectively.

QVS made a huge statement after making a clean sweep in the FSSRL finals.

The boys from Vulinituraga beat Nasinu Panthers in the U-15 grade, MBHS in the U-17 and Ba Pro in the grand finale.

Finally, the Fiji U-20 side was handed a 74-5 drubbing by four-time winners NZ.

All in all, fans enjoyed the weekend of breathtaking rugby.

More excitement is on its way this super weekend!