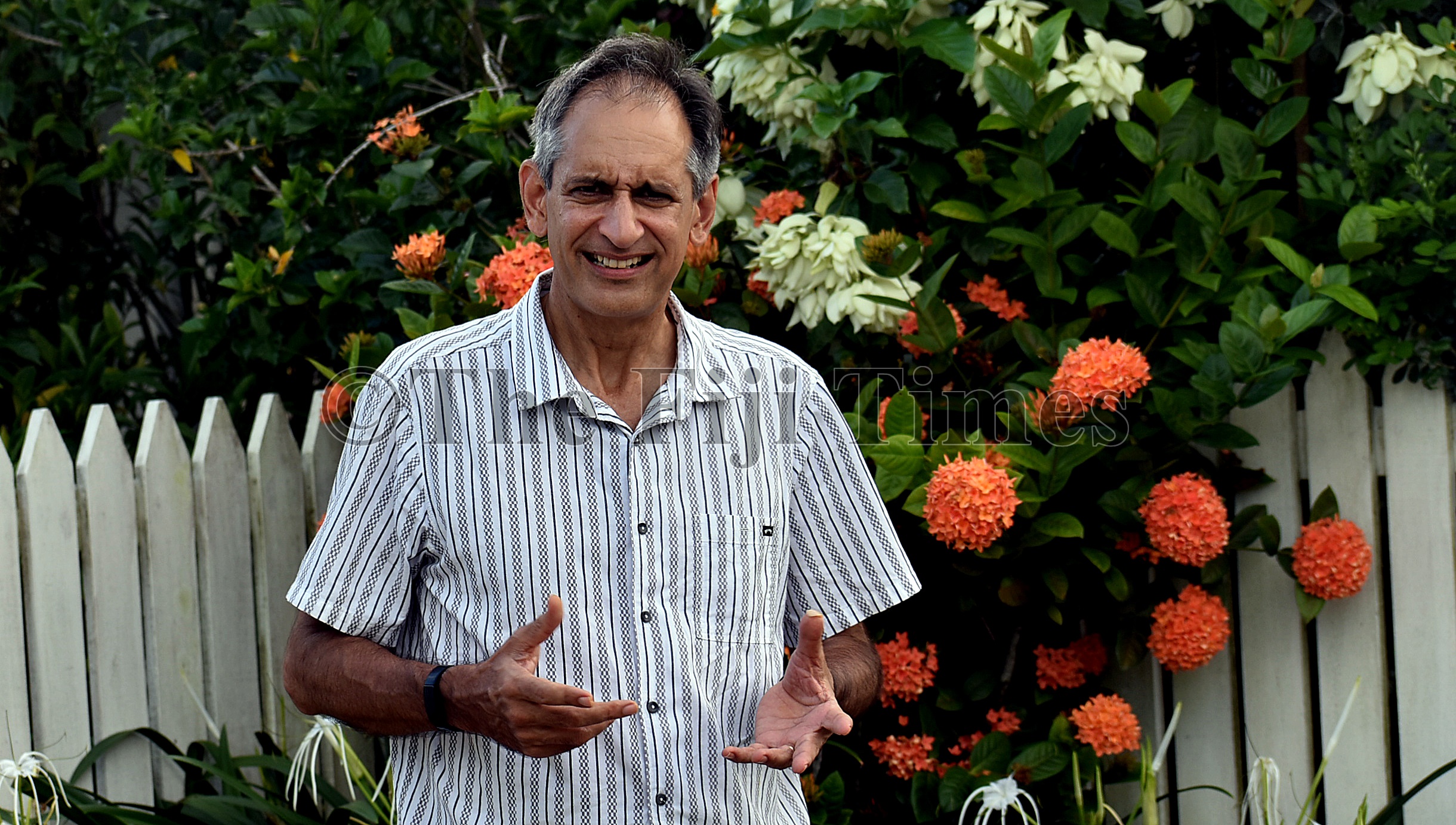 FOR me personally yesterday’s newspaper (23/01) The Fiji Times is worth not $1.50 but I could gladly pay $50 only due to one major informative article by Suva’s prominent lawyer Richard Naidu (Claims a serious matter). He so eloquently answered all the petty issues raised by the former attorney-general Aiyaz Sayed-Khaiyum. He must have thought that no one would pick these since he was one of the architects of the 2013 imposed Constitution but we all know that there are other smarter and brilliant lawyers around. He had been fooling his own colleagues in his own party all this while by his bulldozing style. They all lined up behind him while conducting his press conference at their party’s headquarters. They were made to stand there in silence for over an hour. I sincerely request some of these senior colleagues like Parveen Bala, Mahendra Reddy, Mosese Bulitavu, Premila Kumar, Faiyaz Koya and others to find time and read yesterday’s article by lawyer Richard Naidu. I would not like to go over this article again but request our readers not to miss reading this particular article. Finally I extend my sincere thanks to lawyer Richard for this masterpiece effort. Besides being a brilliant writer, you are also an outstanding and powerful orator. Last year I was fortunate enough to attend two functions in Fiji where you delivered your speeches. One was at Jai Narayan College where the function was in memory of late Professor Brij Lal and the other at a political rally of PA and NFP at Rishikul Hall in Nasinu. VIJAY MAHARAJ Sydney, Australia

Power of the brand!

As I went over yesterday’s The Fiji Times, I thought about the treatment the trusted brand was given by the past government. The power of the trusted brand, which survived the treacherous conditions, is ultimate, and its impact beyond comprehension. The Fiji Times faced the full brunt and was often a topic of discussion in the august House. If that was not sufficient, a prominent minister, in an open meeting, advised the participants not to buy the newspaper as it was full of lies and half-truths. Ironically, the honourable minister vacated his seat, but the people’s newspaper continues to flourish. Those, who criticised this newspaper, failed to realise that this newspaper continues to grow in strength because it operates independently. I’m proud to say that The Fiji Times is a shining example of how one can survive under crusades, and continue to be the beacon of hope for readers and the nation. The editor-in-chief and his team are commended for another robust piece worth reading. From Richard Naidu’s response and honourable Filimoni Vosarogo’s reply to the former A-G, and the other wonderful reading materials, summed up the message on the masthead, ‘Your Voice Since 1869’. Good on you The Fiji Times! Rajnesh Ishwar Lingam Nadawa, Nasinu

When a dog keeps barking loudly outside our house at night we throw a few stones, and that usually shuts it up. By the way, when Mr Sayed-Khaiyum was giving his long angry speech to the media the other night, on whose behalf was he barking? After he ousted himself from Parliament in favour of Mr Tuicolo, I believe he no longer represents anyone other than himself. Mr Sayed-Khaiyum’s long complaint would have had more credibility and relevance if it came from an elected representative like Mr Tuicolo. Mr Sayed-Khaiyum should confine his opinions in Letters to the Editor, just like the rest of us. Aren Nunnink Savusavu

The Opposition members of Fiji’s 2023 government have finally spoken out. And all that they have said, is remind the people of Fiji of how we were governed the last 16 years of their term in Parliament. A bitter pill to swallow for all of them, they can only stand behind their mouthpiece after a month of silence and stare morosely at the cameras. Their faces incredulous as if they never thought that they would be in the position they are in now. As the new coalition Government moves forward at speed within the ambit of the law and full transparency, Fiji’s civil servants are still trying to catch their breath that they can work without fear and speak-up without reprisals. The diatribe from the Opposition mouthpiece is as tarnished as the lectern from which he spoke from and in turn blemishing the rest of the opposition members as they gawk out from the background and see for themselves how a proper civil administration is supposed to be governed. Epeli Rabua Tamavua, Suva

The recent and past conduct of Aiyaz Sayed-Khaiyum reminds me of my childhood friend Mukesh. Mukesh used to bring his soccer ball and we all played in the local school ground during holidays. Mukesh, holding the soccer ball would stand and pick his players and make all rules of the game; like everybody has to pass the ball to him and while near the goal post, ball had to be passed to him so he could score the goal. However, when we began to play and pass the ball among ourselves, Mukesh would grab the ball when it came across him and stand on the sideline complaining. We would plead and promise Mukesh that we would play by his rules. On day, my mates and I collected fertiliser plastic bags and rolled them into a ball and began playing soccer. Soon, Mukesh arrived and stood watching us from sideline. He began commenting on how badly we were playing and did not follow the rules of the game. But the most bizarre moment was when he blurted out that his uncle could kick a soccer ball across the Nausori Highlands to Suva. (This reminds me of FFP’s promise of highway across Viti Levu before elections). Rakesh Chand Nadi

I hope the amenable coalition Government who possess ingenuity and gumption would contemplate the enumerated issues with alacrity which I believe would educe and revolutionise our nation to unprecedented heights. In view of the burgeoning inflation due to the volatile global situation as currently experienced from the ongoing Russia vs Ukraine war especially on fuel, wheat, fertiliser and other imported goods because of paucity and exorbitant freight cost, the primacy must be on food security to absorb similar external shocks emanating from war, famine, conflagration, deluge and pandemic etc. The current war in is unpredictable. It’s prolonging and might spiral out of control after recent attacks on the nuclear plant and subsequent escalatory military assaults be disastrous for us all pervasively. Closer to home, the conflict concerning Taiwan is perilous as any miscalculation by the warring countries would be irreversibly catastrophic as was the case prior to WWI. Hence, I firmly believe that the new Government should venture into the following for our sustenance without any delay or reservation: n Dairy farming to be introduced in Bua Province. There is ample land available to develop and sustain it. Milk can be transported to the processing plant in Rewa daily via ferry service if installing a plant in Bua would require exorbitant capital investment. We’ll have sufficient dairy products for domestic consumption and the surplus for export; n Sheep and goat farming to be boosted throughout the country on a massive scale so that we are self-sufficient with no import and the surplus for export; n Rice cultivation must be intensified to the level to attain self-sufficiency and surplus exported; n Garlic, ginger, turmeric and other spices must be highly incentivised until we have surplus to export; n Cassava flour to be harnessed for potential use by melding minimum wheat and hopefully with other cereal products such as corn etc. Reduce reliance on imported wheat. Since wheat is a staple food, it’s imperative to have an alternate food source available; n We must attain autarky especially on food items; and n Plant more sandalwood trees and introduce Radiata Pine and Hoop Pine to sustain the timber industry that has made massive capital investments and employs thousands of workers and possibly other trees that mature faster for its potential use that would supplement and substitute the native trees eventually. Furthermore, the Government must go green energy. All houses must be solar powered from the abundance of sunshine available. Motor cars can run on solar powered panels. Introduce vehicles that operate with electricity/hydrogen from India who are revolutionising this industry. Reduce importation of fossil fuel. Patently, I perceive pursuing the issues enunciated would substantially increase our GDP, earn more foreign exchange, reduce inflation, provide employment, create wealth, and eradicate poverty, crime and other social ills. The magic words for growth and development in all spectrums of life is peace, progress and prosperity. This is the only way forward. Preponderantly, I sincerely hope that an international airport, a harbour and by-pass road plus a bridge is seriously contemplated for Labasa Town and Vanua Levu that would be seminal and provide impetus for other industrial developments such as garment, mineral water, agricultural products, fisheries, timber products (Mahogany logs are available) etc. As the old aphorism goes, where there is a will, there is a way and the sky is the limit. Ravind Chandra Naidu Tuatua Branch Rd, Labasa

Heartiest congratulations must go to the gutsy Los Pumas for their 14-12 dethroning of hot favourites and hosts New Zealand. What an awesome victory! Argentina pulled off a remarkable victory. Discipline let the host nation down. Ronnie Chang Martintar, Nadi

On the Sunday evening TV One news the former A-G was giving a press conference on the 2013 Constitution breaches. Behind him were a bunch of very sad looking FFP members. Sukha Singh Labasa

Prominent lawyer Richard Naidu cites a number of examples to show the FijiFirst secretary general Aiyaz Sayed-Khaiyum is wrong in claiming the coalition Government is carrying out unlawful and unconstitutional actions. He questions: “Should we really be taking legal advice from Aiyaz?” I believe the short answer is no. There are far more competent authorities in the country to make a determination on whether any coalition Government action is unlawful or unconstitutional. Rajend Naidu Sydney, Australia

One word for Aiyaz and his desperate political assessment of the current government — irrelevant! Please move on and accept the reality that you are a “nobody” now. Nishant Singh Lautoka

What was the purpose of those FijiFirst members standing behind the ex-A-G in the press conference? Some looked tired and some about to cry or probably were crying. Kirti Patel Lautoka

I hear it’s a mental thing… the desire to remain relevant when people ignore your existence. Dan Urai Lautoka

IF I may I would like to pose a question to Mahendra Reddy. While you were the Minister of Waterways how many permits did your Bainimarama-led government approve to the unions and various other concerned groups to peacefully hold their protest? If you can answer my question on this medium than I am willing to join you in the protest you’re instigating against the current Government’s decision on the recommencement of building Laucala’s hanger. AREKI DAWAI Suva