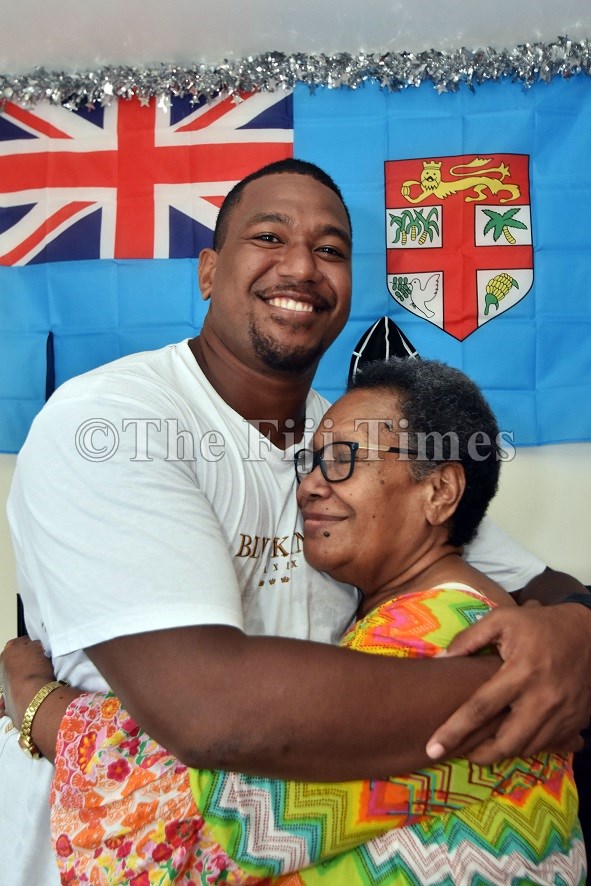 Seeing Totoya, Lau lad Eroni Mawi being farewelled by his family in yesterday’s The Fiji Times is a timely reminder that our stars are leaving for greener pastures.

Mawi follows a long list of Fijians who have been grabbed by European clubs and while his departure is set to benefit his club Saracens, I’m adamant that our forward star will be available when the call comes for national duties.

Having started his rugby journey with Lautoka primary and then at provincial level, Mawi became a star for the Fijian Drua and Latui sides and was one of the few local boys picked by John McKee to be part of the Flying Fijians.

Eroni Mawi’s game time with Saracens is sure to give him the much needed exposure that should benefit our Flying Fijians in the Pacific Cup and 2023 RWC.

My best wishes to Eroni Mawi on his new rugby journey!

The photo (FT 10/02) of the couple who were carefully making their way across the flooded Buabua Bridge in Lautoka brought back memories of the father and daughter whose bodies have not been found.

Napolioni Kaitavu and his nine-year-old daughter Aliti were swept away while trying to cross the Wainikavou river on January 16.

We need to tell our people that the power of water is immense, don’t underestimate it.

The entry and exit of the Flagstaff Plaza in Suva needs to be reversed.

Currently the entry is on the Extra Supermarket end and this causes traffic jams at the Flagstaff roundabout.

Times have become normal again. Those who had started to sing a different tune have readjusted meters.

Pressing forward, besides teamwork which has been credited for the Sydney victory, sheer luck has to be mentioned too.

What would have happened if England and South Africa would not have made petty unforced errors?

In the next few weeks, I hope strategies are worked on so that New Zealand’s lead is cut tournament after tournament.

New Zealand has a runaway lead but it is not unassailable.

I HOPE we have learnt some lessons from the coronavirus outbreak.

After SARS in 2003 which claimed about 800 lives, coronavirus is fast proving to be more deadly with the death toll already rising to 800 plus and as many as 35,000 infections.

One thing is for certain: this would not be the last outbreak. Again it has exposed our vulnerability to effectively deal with such crisis.

According to a report the Chinese switched to eating bats and snakes after pork prices increased by 80 per cent last year.

Like SARS, H1N1 and Ebola, coronavirus also emanated from animals.

The Minister for Health has asked the people to stop eating bats and snakes.

I believe at the same time we should also keep a close tab on the food prepared by our restaurants.

We need to be more proactive by developing an action plan that can be mobilised during such pandemics instead of waiting to see what measures are being implemented by other countries. It may be a little too late.

The latest fatal virus or a multiple of viruses which has now been named the 2019 NCoV which is the 2019 Novel coronavirus is now a real big global concern.

Scientists are frantically coming up with news on its origin and one of the theories suggests the first place where this virus originated was in Wuhan City where there is an wild animal market.

Furthermore reports claim that there is an illegal trade of wild animals such as bats, rabbits and astonishingly snakes in this market.

Let’s keep our fingers crossed that an antidote can be created to stop this latest epidemic that is threatening not China alone but many other countries.

A simple sneeze or cough or touching an area covered by this virus spreads it in a whisk.

I believe Fiji has made such big strides on human rights since December 2006 that it’s now front and centre even on the climate change front (FT 08/02).

Wow that’s something to think about. And I am sure, trade unions, civil society and human rights groups are thinking about that and shaking their heads in astonishment.

It is sad to see that the doctors who warned their friends on social media reprimanded by the police (FT 08/02).

One of those doctors, Dr Li Wenliang succumbed to the virus (FT 08/02).

While I’m not a fan of social media, what does one do when there is so much control over information? Even China’s Supreme Court criticised the police (FT 10/02).

China most probably does not have a policy on whistleblowers. Hopefully after this disaster good sense will prevail.

I am just wondering what kind of steel and cement was used on this bridge and how they calculated the life span.

The Marshall Islands has banned overseas travel by government ministers and civil servants because of the coronavirus.

It is about time our globetrotting lot did the same, not only because of the virus but of the poor state of the economy.

Stay at home, save some money and do some positive work, rather than talking rubbish.

Now! What would the reason be for the removal of the foot crossing at Narara Pde which leads directly to Lautoka’s newest mall?

I wish to tell John Brown that the reply regarding the swimming pool is in the pipeline.

The road safety song we hear on television and radio seems to be a family and household song by now.

When we hear that sweet voice, whatever we are doing, we automatically sing, whistle or hum with that pretty girl.

The Land Transport Authority is advising us to obey the road rules when crossing the road.