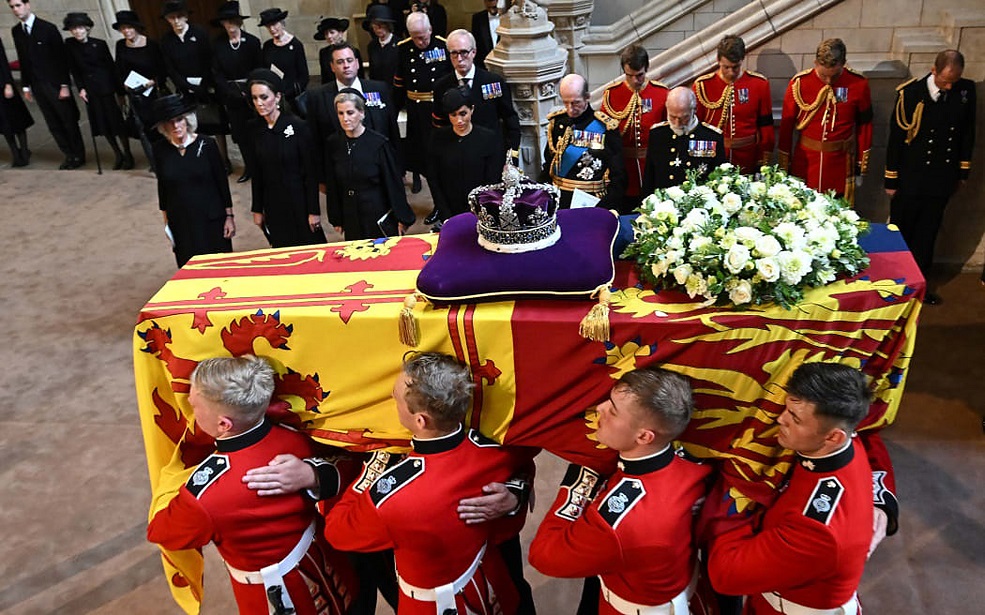 Pallbearers carry the coffin of Queen Elizabeth II into Westminster Hall at the Palace of Westminster in London. Photo: AFP

Indeed it was only fitting that the late Queen Elizabeth II was farewelled at Westminster Abbey, the place where she was married in 1947 and crowned in 1953. It was fitting that she was buried alongside her late husband Prince Philip in a private ceremony attended by close family members. Now as Prince Charles begins his reign after Queen Elizabeth II’s death, I wish him all the best and I look forward to his visit to our beloved shores, bringing back beautiful memories of our connection with the monarch! Rajnesh Ishwar Lingam Nadawa, Nasinu

The honourable Prime Minister, definitely like a true statesman, should announce the election date. My concern is that the rainy and cyclone season is about to settle in and hopefully does not interfere on election day as another act of God to stop Fijians voting. In the meantime, Tarun Tikaram of Lami is very concerned about The People’s Alliance and National Federation Party coalition that could soon collapse like a house of cards. Mr Tikaram, the voters on election day will decide which house is built on shaky grounds. It will indeed be a pick and play game to choose individuals who will lead us into Parliament, not your criticising of political parties to suit your agenda. I do not belong to any political party but have a very strong following in sports and “charity” work. Maybe, you should follow-up on the number of projects in the pipeline, in particular the incomplete Lautoka swimming pool. As a genuine ratepayer, I, like so many others, want to see which political party’s manifesto endorses the return of municipal council elections. We keep hearing from Government ministers about no Fijians being left behind, but the reality of the matter is that quite a number are still left behind. Kudos to the many NGOs for their tireless efforts in helping thousands of less fortunate Fijians. You are very much appreciated by simple, ordinary Fijians like me. God bless and guide our mighty NGOs. Raymond Singh Golf Links, Lautoka

As raised by FTU general secretary, Agni Deo Singh, in The Fiji Times (15/9), claiming that teachers have not been paid their rural allowance due according to their job contract is a serious concern for all the teachers. We all look forward to our well-deserved justified pay. Teachers serving in rural areas also face a lot of challenges with sacrifices to adjust their lifestyle in diverse cultures and societies putting children first. At times they put their own families, second. We salute those veteran teachers who have gone through this leaving their footprints behind. Now we have school zones to ensure all schools, urban, rural, or semi-urban to provide standard quality education in conducive teaching, learning environments with the latest technologies in all schools. Teachers are ever-committed with their code of conduct to serve with “Service before self, Child our hope”. They need to be paid what they rightfully deserve with justification. Dedicated teachers plant the seeds of knowledge and wisdom that last a lifetime. They need to be paid accordingly. Tahir Ali Hamilton, New Zealand

The mother with her shopping basket, walked slowly down the aisle, in the suburban supermarket, searching with her tired eyes. She stared glumly at the prices, then tentatively reached out, but quickly thought twice, when she remembered, what she had in her purse. She had to forgo what she was wanting, except for a few essentials, until she was able to make some money, from selling roti and curry parcels. Edward Blakelock Admiral Circle, Pacific Harbour

Unfortunately, the free GP services takes about 2-3 hours to access and the dental services are all price tagged. Let’s hope this changes soon. At least it’s good to have a New Zealand medical vessel gracing our shores offering services, worth thousands of dollars, free to our outer island communities who are getting amazing dental work done. Let’s hope more medical and humanitarian vessels can grace our shores. God knows we need it. Joan McGoon Kuata St, Lautoka

Everyone would agree beyond any uncertainty that teachers play a very decisive role in our education system. Teachers are the key stakeholders responsible for shaping the future of any individual. Parents happen to be our first teachers and the teachers in schools, colleges and universities are the second lot. The new report released by UNESCO and authored by a local academic states that “poor teacher-student relationship is ‘forcing boys’ to drop out of schools in Fiji” (FT 21/09). I must say that I do not agree with this fragment of this academic research for a few reasons. Firstly, the report is a direct discrimination against a certain gender – the boys in this case. Secondly and most importantly, it undermines the enormous efforts and sacrifices of teachers. One can vouch for the fact that the miscommunication or the “poor relationship” is not the entire fault of the teachers. Children nowadays, regardless of their gender, are insolent to their own parents. Therefore, one can imagine how they may be interacting with their teachers. Students are never “forced” by anyone to drop out of school. Sometimes it is the socio-economic status of their parents and otherwise their own free will to drop out of school. We, as parents, should teach good discipline and manners from home so that they communicate effectively with their teachers and learn. Respect your teachers to prosper in life! DINESH KUMAR Ba

The recent interview between Sashi Singh Talking Point (SSTP) and Mick Beddoes on SSTP Facebook page on Sunday (18/09/22) was best described by Mr Beddoes on the reality of the matter on how government budget is spent. But I better leave it to Mr Beddoes to explain! I don’t often follow Mr Beddoes’ analytical research on numbers, but his recent explanation on how the iTaukei population is being treated by people in government, just turns heads because now the Government won’t know how they will respond to the breakdown of figures given by Mr Beddoes. A lot of Fijians must have watched the popular interviews now, including Government, and like Mr Singh always said, my invitation to the Fiji Government PM, and fellow ministers and permanent secretaries for an interview still stands since 2021. Our only mainstream media hope is The Fiji Times, hoping they will consider inviting Mr Beddoes to write in their weekly columns every Saturday in the name of true genuine democracy and transparency? Jioji M Cakacaka Tadra-Votualevu, Nadi

Some election promises we will be hearing. National peace will be declared, all roads and streetlights will be fixed (probably tiled), no more water disruptions, basic food items price reduced. Do you know the mistake a lot of career politicians make is in forgetting they’ve been appointed and thinking they’ve been anointed. Wise Muavono Balawa, Lautoka

The exchange between A-G Aiyaz Sayed-Khaiyum and NFP leader Professor Biman Prasad (FT 21/9) left me wondering who really displays “the tendency of shooting off his mouth” without thinking through what he is saying? I believe the gullible public will get taken in by the one with the gift of the gab. But the discerning public will know who has substance in their statements. Rajend Naidu Sydney, Australia

Thousands of donkey male genitals bound for export to Hong Kong were seized by the Nigerian customs officials (FT 21/9). I wonder what they do with them. SELWA NANDAN Lautoka

When I read Nigerian officials seized “thousands of donkey penises that were about to be exported (smuggled) to Hong Kong “(Source: AP / FT 21/9) I wondered is there anything that is not illegally making its way into Hong Kong and other places because of the vulturistic demand there regardless of species extinction threats? Rajend Naidu Sydney, Australia

Fiji Day is celebrated in a unique style every year since the public holiday is allocated on October 10. This pandemic has affected many celebrations. Looking forward this year to enjoy in a memorable one. Navneet Ram Lautoka

I often see ‘public’ trees being killed and I am told that the tree is dying and is a threat to the public. How can we save the trees instead of killing them? Allen Lockington Kava Place, Lautoka