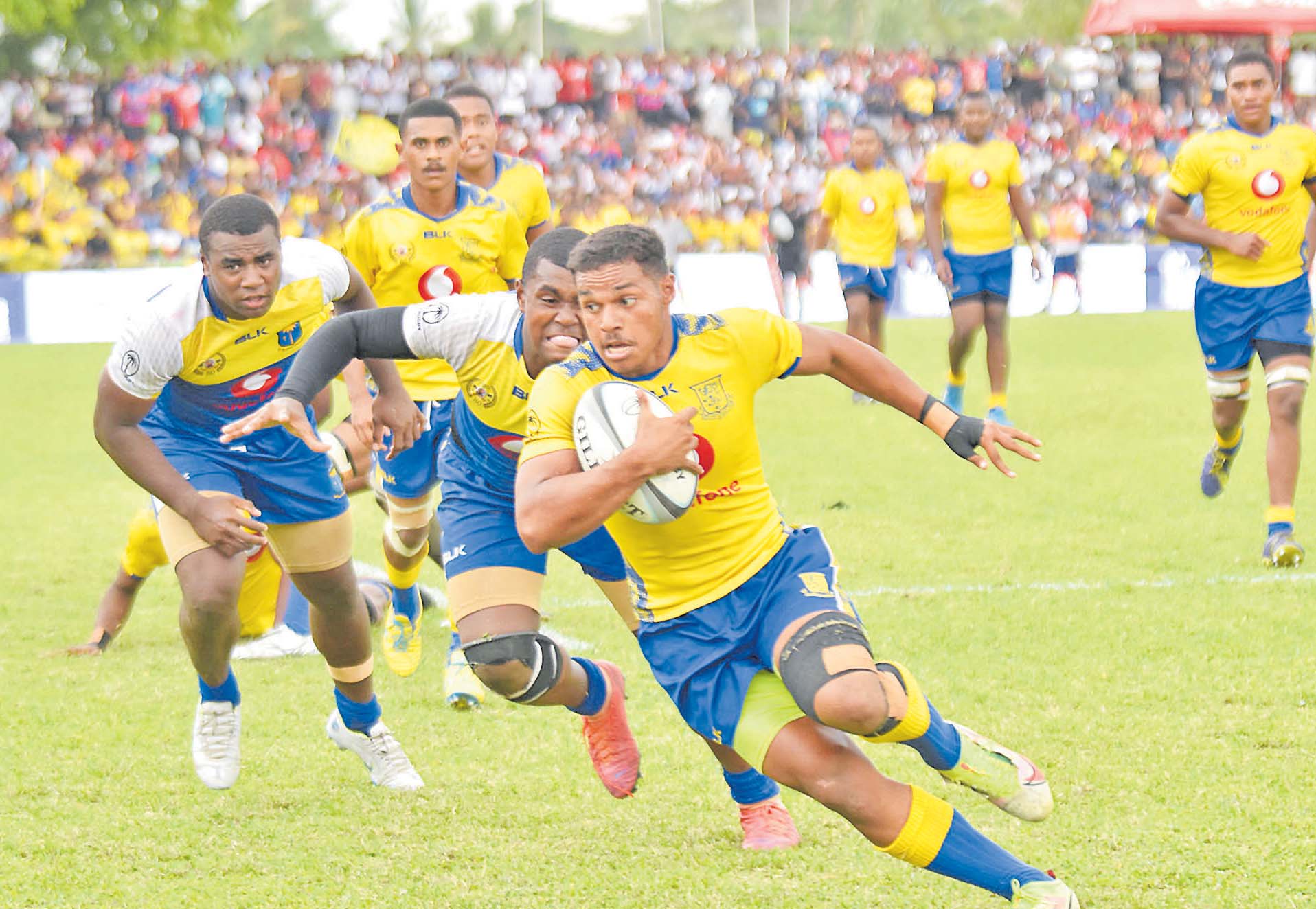 Suva Grammar School’s Philip Baselala on the attack against Natabua High School in their under-18 semi-final match of the Vodafone Fiji Secondary Schools Rugby Union Super Deans Championship at Prince Charles Park in Nadi. The Lions edged Natabua 30-26 to book themselves into the U18 final against Marist Brothers High School. Picture: JONACANI LALAKOBAU

Suva Grammar is chasing the Holy Grail as champions of the Southern Zone, while Marist is riding on glory from defeating the Eastern and Western Zone champions RKS and Ba Provincial in the quarters and semis.

Both sides have lost their key players ahead of the exciting battle, but that’s long forgotten as they aim to capture lost glory.

Ironically, both schools shared the spoils with Eastern giants RKS.

Grammar has already secured the Coca-Cola boys division title and a win on Saturday will be the icing on the cake.

However, the red fire and spirit will not be extinguished easily as the ‘iron boys’ from Flagstaff aim to end the losing jinx.

Veteran sports reporter, Maikeli Seru, in his article titled ‘Final hurdle’ (FT 05/10) stated that faith and confidence have been driving the Flagstaff Warriors and this could drive them to wrest the prestigious trophy from the Lions.

They lost 20-10 to Grammar in the final of the Southern Zone and this loss, I’m sure, would motivate and drive them to achieving greater things.

Honourable Minister Parveen Kumar, stop worrying about “sideline commentators” calling on Government to stop initiatives and income generating projects for youths, as it is the duty of any government in power.

These are all at the expense of taxpayer dollars, donor agencies and the many different forms of loans in the name of smart borrowing.

Maybe, as a past Minister for Local Government shed more light to the ratepayers regarding municipal council elections and the incomplete Lautoka swimming pool.

There was so much comparison about Sri Lanka’s economy and debt, but the International Monetary Fund has preliminarily agreed to extend a 48-month $2.9 billion loan to help restore economic stability.

The Australian government is also pouring millions in development assistance.

On the home front, there is still no sign of an election date that will see majority of voters aged 40 or below heading to the polls.

My 5 cents take is the 2022 election will not take place before December 10 since we will have the Prime Minister’s International Business Awards 2022, just saying.

Finally, thank you Shamima Ali for encouraging women vendors at the Namaka market to exercise their right to vote.

Women power at its best.

IF freedom of expression and the right to privacy, are fundamental rights, recognised in sections 17 and 27 of our Constitution and with the ensuing limiting provisions, enshrined in the Interpretation section therein, should these need to be defined again, in ensuing legislations?

Just posing a question, arising out of a stakeholder’s submission, to a parliament committee, (FT 04/10) on whether Fiji should ratify the Budapest Convention, on cybercrime.

The long and short of Jan Nissar’s political outlook is that he has no problem with the ruling FijiFirst party and heaps of problems with Opposition parties (FT 5/10).

And, what’s more, according to his “objective” view only “dopeys ” would vote for Opposition parties.

Perhaps Nissar would like Fiji to become a one party state under the ruling FijiFirst party just like China under the Chinese Communist Party?

That is the logical extension of his political outlook on governance in Fiji.

Many youths involved in such activities operate from some hiding places in that area.

Delai, with the help of the Ministry of Employment and police are able to discipline them with awareness sessions.

He is able to provide them with some jobs.

Hopefully, this will help them to earn a living legally.

It’s good to know that the Ministry of Agriculture and others concerned will be able to develop more farms and employ more people to keep them occupied.

This may be one of the ways toward crime prevention.

“An idle mind is a devil’s workshop”.

From the Fijiana 15s performance against Canada, one can see their “can do” spirit when they held the Maple Leaf to a 0-0 draw at half time.

Although they got tired by the second half, one can see their fighting spirit on show.

So expect some great action when they come up against the English Rose this weekend.

She was once asked how she would like to be remembered.

She said “As a good person. Someone who never hurt nobody” (Abc world tonight 4/10).

Wonder how many people in power can be remembered that way?

I said walla, as I shared with some of my friends something I heard before the coup of 2006, during the late Qarase’s government, the need to have storage facilities on a very large scale where agricultural produce and fruits can be stored, for our local and overseas consumption.

We are approaching our mango season here in the Western Division.

Our stored mango chutneys and kutchlas add flavours to any dish we eat.

Something the Minister for Agriculture and his team can think about if they are reading this letter?

Keep up with your show of the faith Marist.

Believe and nothing will stop you.

There has to be an underlying matter.

The phasing out of road humps to be replaced by speed cameras as in Tamavua Village is a welcome move by the FRA.

However, the removal of that hump has been less than satisfactory, in fact quite unprofessional, resulting in some low hung vehicles still treading slowly over the hump and road users not reaping the outcome they ought to be getting.

These definitely and generally slow down traffic flow.

Speed cameras are the best alternatives.

There are far too many “cow-boy” and irresponsible speeding drivers on our roads.

It is far better catching them.

This should ease over-crowding on our roads.

Fiji has an excessively high number of vehicles which often cause congestion.

Some drivers lack courtesy, tidiness and a pleasant attitude.

Aged buses need to be retired.

Buses need one entry point and one exit point.

This assists greatly in emergencies.

Ramps are definitely needed for wheel-chairs.

Many bus passages/isles are grossly narrow.

This is grossly inflated to suit smaller sized passengers.

One size does not suit all.

Better ventilation needs addressing, in most cases, especially when buses are full to capacity.

Body odours can be most irritating and offensive.

Besides, many buses definitely have insufficient leg room.

This can be most uncomfortable for taller travellers.

I have experienced this several times between Nadi and Suva; and Nadi-Lautoka too.

I trust, by sharing the above, our learned authorities will begin to pay some attention to detail needed to properly address passenger comfort and concerns.

It is only human to resist change.

Progressive change, for the better, is inevitable.

My son and I do not agree with the proposal from the FRA to replace road humps with cameras.

Road humps are a physical reality that the drivers can see and slow down.

On the other hand, for drivers, cameras are not a reality and hence possibly not a deterrent.

They are also expensive.

Drivers may continue to speed only to be caught up later with a fine.

Our plea to FRA is please not to go the camera way.

Humps may be crude and old fashioned but it works!