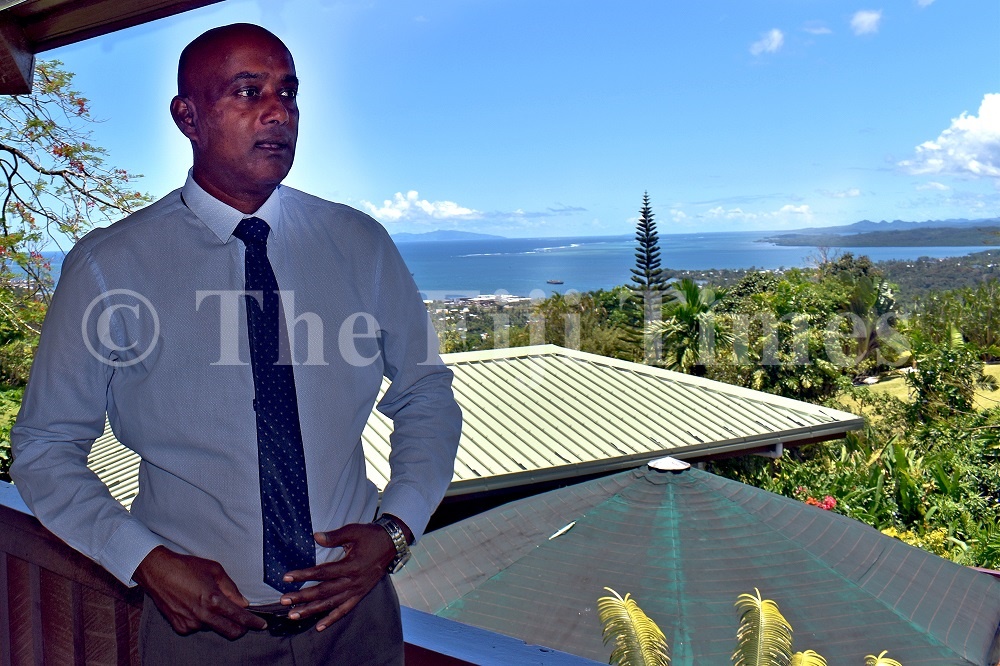 University of the South Pacific’s senior lecturer in economics Dr Neelesh Gounder during an interview with Lens @177 in Suva. Picture: SOPHIE RALULU

In The Fiji Times 23/11, Dr Neelesh Gounder firmly said that the State should be “very concerned” about the debt situation in Fiji.

I believe this is not the first time Dr Gounder had raised this issue, for I vividly remember sometime back he said that if we are not careful about our debt we might end up in a situation similar to the Sri Lankan experience.

While I totally support what Dr Gounder said, however, I believe that not only the State should be “very concerned” about our debt situation, but every citizen of this country should.

Therefore, as the General Election is near, I am looking at a party that would consider in their manifesto how we can address the debt issue in Fiji?

I’m rising during the 16 Days of Activism for 2022, to eliminate gender violence and gender inequalities that exist in my community.

What is 16 Days of Activism against Gender-Based Violence?

Simple interpretation would be; an international campaign to challenge violence against women and girls which was mooted by a group of 23 women in 1991 at Rutgers University, New Jersey, USA, including our very own human rights activist, Shamima Ali who was part of the original group.

The 23 participants came from different countries in all of the world’s regions and were drawn from a variety of fields – lawyers, policymakers, teachers, health care workers, researchers, journalists, and activists.

These women were local civil society leaders with at least two years of experience in women’s organising who were also interested in building the global women’s human rights movement.

This campaign runs every year from November 25, the International Day for the Elimination of Violence against Women, to December 10, Human Rights Day.

The International Day against Violence against Women was first declared in 1981 by the first Feminist Encuentros for Latin America and the Caribbean to commemorate the violent assassination of the Mirabal sisters on that date in 1960 by the dictatorship of Rafael Trujillo in the Dominican Republic.

The theme of the 2022 Campaign is “UNITE by 2030 to End Violence against Women campaign”.

You can contextualise it in your own settings with a march with women’s and men’s groups at night on streets, reclaiming it, that it is safe for women to walk alone at night, candlelight vigil talks, engaging men in your communities to openly discuss issues affecting women and girls, talk to your members of church or village.

Or even advocate through use of mainstream media and social media. Just a week ago body of a young mother was found dead at Lomolomo Beach and a young iTaukei mother of five was found murdered in a hotel room in Australia like two days ago.

The next woman to be raped or murdered might be someone you love.

Help us stop the violence.

You may liaise with your nearest FWCC branch to advice you what you can do in 16 Days of Activism against Gender-Based Violence campaign.

It’s great to see everyone doing their own campaign but we should always go back to the history of its real meaning especially those that started it.

In the most anticipated match of Group C, Saudi Arabia notched one of the biggest upsets in the FIFA World Cup history.

Argentinian football fans worldwide are stunned and still struggling to recover after their most shocking loss.

The two football teams have met four times prior to this World Cup.

Argentina had beaten Saudi Arabia twice with the other two games ending in draws.

Ardent fans of the Saudi Arabia football team are celebrating their well-deserved win while the Lionel Messi captained Argentina team is still shocked by their devastating loss.

Despite taking an early lead from Messi’s penalty goal in the 10th minute, Saudi Arabia made two brilliant comebacks in the second half.

According to FIFA online statistics, the two teams went into halftime with Argentina leading by a goal to nil and a 96 per cent win probability.

Argentina had more shots on target, while Saudi Arabia had only two, both of which successfully landed the ball at the back of the net.

Meanwhile, my team France, thrashed the Socceroos’ 4-1 in the second match of Group D yesterday as I had predicted earlier on.

This World Cup is becoming increasingly sensational by the day and so is the local news!

I think the benefits of regular exposure to high level of sporting competition is evident at the soccer World Cup currently in progress.

It is similar to what the World 7s Series has produced.

Would the Fijiana Drua team and the Flying Fijians be also using the state-of-the-art Fijian Drua training facilities at Nadi during their respective campaigns?

I would like to know who holds the world record of highest number of ministerial port folios?

To score 11 goals in a game is a milestone achievement.

The question I would want to ask is when will Fiji soccer play in any World Cup?

Congratulations to both Toa Samoa and the Fiji Bati for doing so well at the Rugby League World Cup in England recently.

Of course, a lot of the players in both these teams play in the Australian NRL so they need to be good to play at that level.

This is a game for all the big boys. Cannot say the same for the Mickey Mouse 7s players or that game.

But I believe they do bring a lot of joy to all the grog dopeys of Fiji.

Good on them for providing a seven-minute level of service and joy.

It appears to me that he has run out of ideas and policies and has lost touch with reality!

There’s more to life than politics!

In Qatar, Saudi Arabia showed that it takes a lion heart performance to down a giant as it pulled off an improbable victory against Lionel Messi and Argentina in the opening match of Group C.

Saudi Arabia stunned the world with a 2-1 comeback.

Messi drew first blood with a penalty strike that he slotted perfectly into the lower left corner.

Argentina had two opportunities to increase its lead to 3-0, but both goals were ruled offside.

Things changed in favor of the Saudis right after the halftime break as Saleh Al-Shehri produced the leveling goal.

Then the breakthrough happened for Saudi Arabia four minutes later as a mad scramble for the ball inside Argentina’s box ended up in possession of Salem Al-Dawsari who rifled home the game-winner into the top far corner to complete the stunner.

Building a nation may be likened to preparing a particular menu for an important dining occasion for many guests.

On that menu are a wide range of dishes and each dish has it’s own specific recipe, prepared by a group of chefs.

This group of chefs must work together, follow their recipes precisely and present the dishes according to each recipe.

Any deviation from or interruption to this process has the potential to ruin the meal.

This will require a return to the kitchen to start all over, meaning a significant loss in time, energy and resources.

Many a meal has been ruined in the past by unexpected disruption and incompetent chefs and whilst no group of chefs is perfect, they ought to be allowed to serve up the complete menu before the next group moves into the kitchen.

As the saying goes… “too many cooks spoil the soup”.

In spite of very concerted efforts, and the noble intentions, as well as the hard fought resolutions of many conferences, it’s still very hard to envision the reality, of the ultimate demise, of the oil and gas industries.

This will continue to remain the mainstay, of many economies out there today, despite what they all say.

That’s just the way the cookie crumbles, today and everyday, despite all the rumbling and grumble!