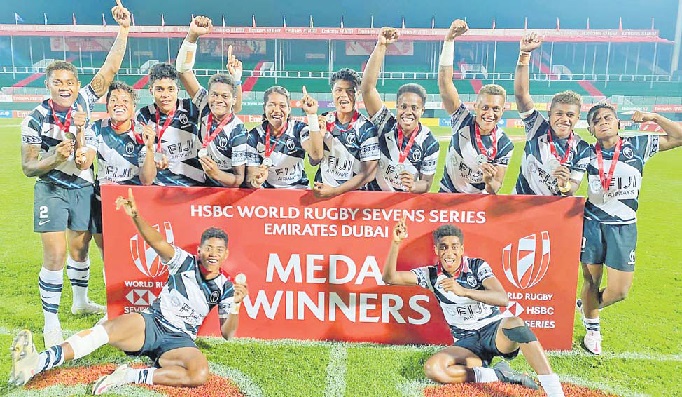 The success of the Fijiana team continues to motivate girls and women to take up sports and use sports as a means of earning an income.

The days when girls and women were shy of taking part in sports are gone and these days it is pleasing to see young ones taking interest in sports such as football and rugby that have long been classified as men’s sports in Fiji for some time.

After winning bronze medal in Tokyo, the Fijiana went one step up in Dubai as they finished second (behind Australia) and grabbed their first medal of the HSBC World Rugby Sevens Series.

We should be proud of their achievements. A little bit more effort and concentration and the girls will be capable of toppling the Aussie women’s side.

I’m sure coach Saiasi Fuli will address the shortcomings and downfalls and the girls will aim for gold medal.

I wonder what the member of Parliament had come across in reality that made her to believe that The Fiji Times and CFL were a communication tool of spreading lies.

Does she even read the one-sided and partisanship local reports of the government-funded paper?

The Fiji Times is a leading newspaper and most preferable to the majority of the general public.

During childhood we were taught not to point fingers at others. It was bad manners. Also, when you point one finger at others, three are pointing at you!

Therefore, do soul searching before you speak. The Bible says do not pick a mole in someone else’s eye; check yours first.

Those who live in glass houses must not throw stones at others.

Therefore, all this talk of asking our honourable members to speak the truth, not to personalise comments, not to mislead the public, not to humiliate others, not to tell lies, not to hurl abuses at others, not to find fault with others, speaking half truths or using dubious meanings, keeping campaign clean etc, etc … makes one to stand up and take stock, is this a reality or simply pontification.

Speech is a powerful tool and all politicians have to use it effectively to suit their purpose.

Politics is the game to convince others to your way of thinking through one’s conduct and speeches. If we were to believe that all our honourable members adhere to the above standard, then we will need a Parliament full of saints! DEWAN CHAND Namadi Heights, Suva

Sugar not so sweet

There is a playful advertisement on TV that is showing people of all ages jumping around all very excited and sucking on a square, flavoured ice block.

In fact, they are all so excited you really wonder is it the high sugar content which has given them a “sugar fix”? After all, the first-named ingredient after water is sugar. If these happy folks knew that three limbs are amputated every day in Fiji, they may not be so joyous.

What about: Fiji has the highest diabetes death rate in the world (https://www.stuff.co.nz/world/south-pacific/104333879/three-amputations-a-day-fiji-diabetes-death-rate-worst-in-the-world).

Maybe the statistic: One in three Fijians have diabetes in Fiji (https://www.health.gov.fj/diabetes-2/diabetes/). Would they be jumping around like lunatics then over a highly sugar-charges ice block?

Where is the moral and ethical responsibility when it comes to such advertisements? Is there no watchdog organisation to monitor and prohibit such damaging advertisements?

The power and influence of the media is well-documented yet a blind eye is passed and companies get rich on the advertising and sale of such products.

There needs to be nothing less than robust policies and laws around this but until such times, there really is no place for rejoicing about death rates, amputations and diabetes. JULIE SUTHERLAND Tamavua, Suva

THE Noda Gauna program recently on Fiji One regarding the talent of mat weaving from Vuita Village women was amazing.

From boiling of pandanus and sun drying to stripping into required lengths was the first process.

Colours derived from boiling other variety of leaves with pandanus, added secondary colours to the latter. Much time was involved in weaving mats, topping up with intricate designs.

The tourists have finally arrived. Hope that Mr Omicron did not arrive as well. Immediately decline his entry visa and send him packing. He is not here for a holiday, but to work, destroy and conquer. But, he will not be coming here uninvited.

Mr Carelessness, Mr Complacency, the unmasked family and their relatives are Mr Omicron’s closest friends and they will invite Mr Omicron.

To protect our borders, we also need to be very stringent and protective, without exceptions, within it. EDWARD BLAKELOCK Pacific Harbour

In the same planet

Three recent events clearly show how our world is so interconnected and intermeshed.

The first of these was COP26 in Glasgow, Scotland which brought together leaders of UN member states as well as activists to address climate change and to recommit the world’s people to the Paris Agreement.

This agreement or COP21 was signed by 196 state parties and committed them to keeping global warming to below 2 degrees of pre-industrial level and preferably to 1.5 degrees.

Second, COVID-19 Delta and Omicron variants. Vaccine nationalism has meant that wealthy countries have secured the largest quantities of vaccines and are now in the midst of providing booster shots to their citizens while poorer regions of the world have not been able to give their people the first jab, let alone the second one.

With this inequality of access as WHO warned, COVID-19 keeps mutating with even more infectious strains.

We have had the Delta variant since April this year which escalated havoc and deaths all over the world, and since last week, Omicron has been identified by scientists in South Africa. This variant is said to be 500 times more infectious and has travelled to Europe, Asia and Australia.

Third, last week 27 men, women and children perished in the freezing English Channel trying to cross from France to Britain. These refugees and asylum seekers fled their war torn and conflict prone countries of Iraq, Afghanistan and Syria.

We also witnessed on TV the stand off between Belarus and Poland (and the EU) over refugees.

These people are seeking refuge and peaceful lives in Europe because their countries had been invaded by the USA and NATO, destabilising them, compelling people to seek refuge elsewhere.

The adage, “think globally and act locally” applies to humanity all over our interconnected world and especially the major greenhouse gas emitters, hoarders of vaccines and those who put profits before human lives and those who invade other countries without paying due regard to the deaths, devastation and disruptions to affected communities and the longer term consequences. VIJAY NAIDU Suva