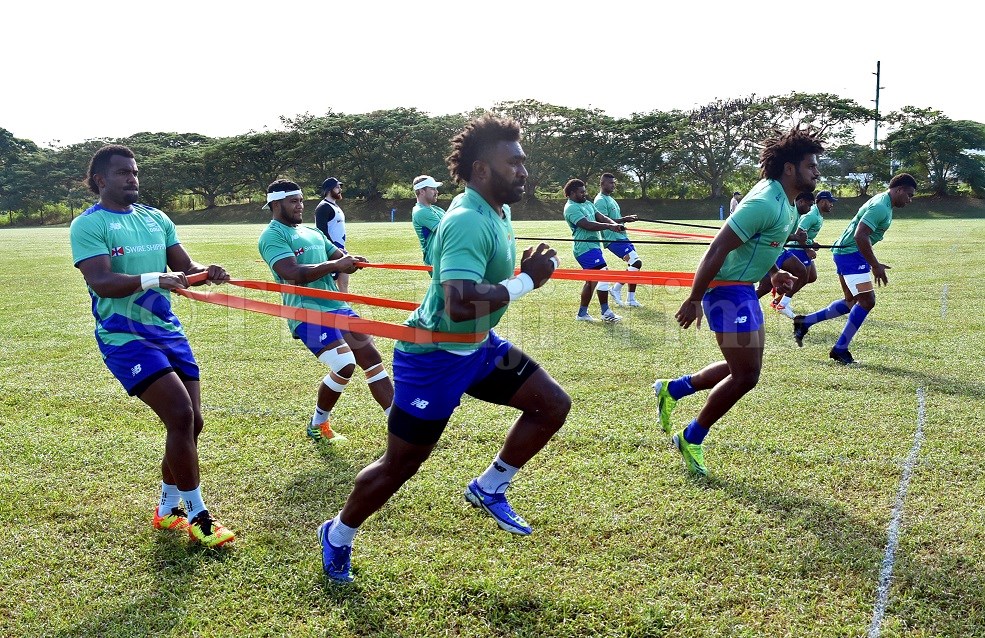 Fijian Drua head coach Mick Byrne stated the players were out to make a statement and that the boys were ready to do what they did a fortnight ago against the Moana Pasifika. He said the Drua was an ambitious young squad of players that were wonderfully talented. He was optimistic that fans would see a side full of energy come game day. While the Drua recorded wins against the Rebels and Moana, the Chiefs are a brand of their own and when they are in top gear, they are hard to contain. They beat in-form Crusaders 24-21 at Orangetheory Stadium. Last weekend, they thrashed the Force 54-21 and are currently ranked fourth with 41 points. A win against the Drua with a bonus point will see the Chiefs leapfrog the Brumbies into third if the Brumbies fail to beat the Moana Pasifika. Hence, the Drua will need more than 100 per cent effort to beat the Chiefs. The boys will also need that “extra man” at Churchill Park. Just like the visitors from Dunedin, our visitors from Hamilton are no strangers to Fijian rugby. Asaeli Tikoirotuma, Maritino Nemani Jr and Kini Naholo, to name a few, have donned the Chiefs jumper, while Pita Gus Sowakula and Emoni Narawa will be part of the Chiefs side to face the Drua. A win against the Chiefs will be the perfect way to close the Super Rugby Pacific curtains. Tovolea mada Drua! Positive vibes created by The Fiji Times are adding excitement as we head for the showdown! RAJNESH ISHWAR LINGAM, Nadawa, Nasinu

The FijiFirst party “accepts any shortcomings, states the facts and does not run away from questions or reporters”. Party leader and Prime Minister Voreqe Bainimarama said this while opening the party’s Nadi branch office last Saturday. So how come when The Fiji Times sends questions, they get no replies? Allen Lockington Kava Place, Lautoka

So there is a high prospect that the election will not take place this year and may roll into January, 2023, as per the PM’s statement (FT 25/05) and as I had predicted earlier. I believe Mr Bainimarama and the A-G are now frantically bidding to cling on to power at any cost. I believe Fijians will discontentedly have to endure another six months of their rule and misery before we march off to the polls. Desperate much, are we? Nishant Singh Lautoka

When the executive director of Dialogue Fiji, Nilesh Lal, said that it was impossible to rig the election in Fiji, I believe it is an understatement. Mr Lal said through their extensive study, they were convinced that when it came to the handling of ballots, there were no issues. I want Mr Lal to show us the evidence of their extensive study which somehow convinced them to make such a claim. I wonder whether Mr Lal is planning to join the FijiFirst party in this year’s election. Kositatino Tikomaibolatagane Vuninokonoko Rd, Navua

Here’s a very humble request for added national pride. At all our international rugby matches, is it possible to sing both versions of our national anthem? Begin with the English version and incorporate the iTaukei version too, please. I strongly believe it will lift our spirits, pride, courage and determination to even greater heights in my view. This is a late request. Could we possibly begin at Churchill Park in Lautoka this coming Saturday when our steadily-improving Fijian Drua take on the might of the NZ Chiefs? If I am proven wrong, I will retract and stand corrected. “Ma ke e rewa, qi numia ena marau du o Viti raraba.” Tovole ro! Toso Viti Drua, toso. Ronnie Chang Martintar, Nadi

Let us take the health warnings seriously. The editor-in-chief, Fred Wesley, penned down a very crucial message in his editorial (FT 25/05). He discussed the views expressed by the permanent secretary for the Ministry of Health and Medical Services Dr James Fong in regards to the monkeypox virus. Dr Fong said the Health Ministry was still considering protocols and measures to contain possible monkeypox cases. Monkeypox is a disease which is spread when humans come in contact with other infected people, animals or materials containing the virus. Symptoms include fever, headache, muscle aches and fatigue. It may be mistaken for the normal viral fever. According to the World Health Organization, cases of monkeypox have tripled in UK and has spread to 15 countries outside Africa. When the Covid-19 cases broke out in China in 2019, the rest of the world thought that they were safe and it was not their problem, but soon every country had transmission and deaths. Similar misconceptions may cause monkeypox to be the next pandemic outbreak. So, beware, take care! DINESH KUMAR Ba

Women’s representation in Fiji’s Parliament has grown significantly from 4.3 per cent in 1995 to 21.6 per cent in 2020 and yet they still face misogyny comments from their fellow male parliamentarians. According to the Pacific Women in Politics website, women have never comprised more than 30 per cent of the membership of national parliaments in Pacific Island Countries since Independence (not counting Australia, New Zealand and the territories of the United States of America and France, respectively in the region), and the percentage of women in Pacific Parliaments currently hovers at 8.8 per cent (as of April, 2020). Sustainable Development Goal 5.5 calls on countries to ensure women’s full and effective participation and equal opportunities for leadership at all levels of decision making in the political, economic and public life. According to the Inter- Parliamentary Union, the global average of women MPs (as at October, 2020) is 25.1 per cent, and 19.7 percent in the Pacific region. I hope that women’s participation in Parliament will remain or increase in percentage after the 2022 election. JIOJI M CAKACAKA Votualevu, Nadi

The women always cross a river and two streams, to do their weekend marketing. They often take heavy loads, to reach the carrier on the road. They leave behind their families, to undertake their marketing in the city. These women market vendors, often have to sleep on the cold verandah, but sometimes in a provided shelter. They return home with groceries, often with very tired bodies, depending on how they do on market days, after the market closes on Saturdays. It’s quite tiresome, but they’re never sorry, because they’re able to support their families. This is one way they also can, lend each other a helping hand. Edward Blakelock Pacific Harbour

This letter serves as a warning to all Facebook lovers. The A-G for Washington, DC filed a lawsuit against Meta (FB) CEO Mark Zuckerberg, accusing him of being personally responsible for the massive Cambridge Analytica data breach. In the suit, the A-G, Karl Racine, alleges that Zuckerberg’s failure to oversee consumers’ data privacy led to the Cambridge Analytica scandal, in which a political consulting firm used millions of Facebook users’ data, without their knowledge, in an attempt to sway the 2016 election in favour of Donald Trump. The evidence shows Zuckerberg was personally involved in FB’s failure to protect the privacy and data of its users leading directly to the Cambridge Analytica incident. This unprecedented security breach exposed tens of millions of Americans’ personal information, and Zuckerberg’s policies enabled an effort to mislead users about the extent of Facebook’s wrongful conduct. This lawsuit is not only warranted, but necessary, and sends a message that corporate leaders, including CEOs, will be held accountable for their actions. Meta (FB) has been at the centre of a maelstrom of controversy since news of Cambridge Analytica first broke. In 2019, the Federal Trade Commission ordered Facebook to pay a $5 billion fine related to the scandal. Racine claims that because Zuckerberg holds the largest number of shares of Meta and has final say over everything that happens at the company, he is ultimately responsible for Facebook’s day-to-day operations. As a result, Racine claims, Zuckerberg is also responsible for the events that led to the scandal. So all ye FB lovers, be careful what you post or you will be toast. Arvind Mani Nadi

Minister for Agriculture Dr Mahendra Reddy says “Fiji will be self-sufficient in rice within 20 years” (FT 25/5). I think that is a rice reason for his Government — the FijiFirst Government — to remain in power for 20 more years. Rajend Naidu Sydney, Australia

NO matter what firm we are in, attending workshops related to your work brings a deep understanding and upgrades knowledge. There is no harm in gaining extra knowledge. Who knows it might come in handy in your journey. RODNEY CLARENCE RAJ Naleba, Labasa

I believe USP’s grant issue will be resolved through a change in government. Dan Urai Lautoka

Since we have borrowed so much, are we a poor country? Allen Lockington Kava Place, Lautoka

In my view, those sporting organisations which have engaged the services of expatriate coaches are enjoying a significant positive impact. At least in the overall performance of the national teams. But what about in the case of soccer? I think the record of local soccer coaches at the national level is far greater than that of expatriates. Or is it something else? Mohammed Imraz Janif Natabua, Lautoka

The Australian election has demonstrated that politicians in power are meant to come and go in a democracy. They must not take the people for granted and think they will be parked in power permanently. That only happens in dictatorships where megalomaniacs hang on to power by hook and crook. Political change is good for democracy. It provides an opportunity to take stock of where we are as a society and rethink our priorities for a better future for the country and the world we live in. Rajend Naidu Sydney, Australia

Words matter but actions define the utterer. To mouth off about commitment and engagement is, cynical at best. Actual acts/actions of commitment and engagement will prove me wrong otherwise. So go ahead and prove me wrong. Unless of course, those words are to be uttered at faraway lands, on the taxpayers dime; just like riding a bike for some snap/selfie shots but at home it’s the “pajaro” or the “parado”. Manoj Lal Patel Lautoka