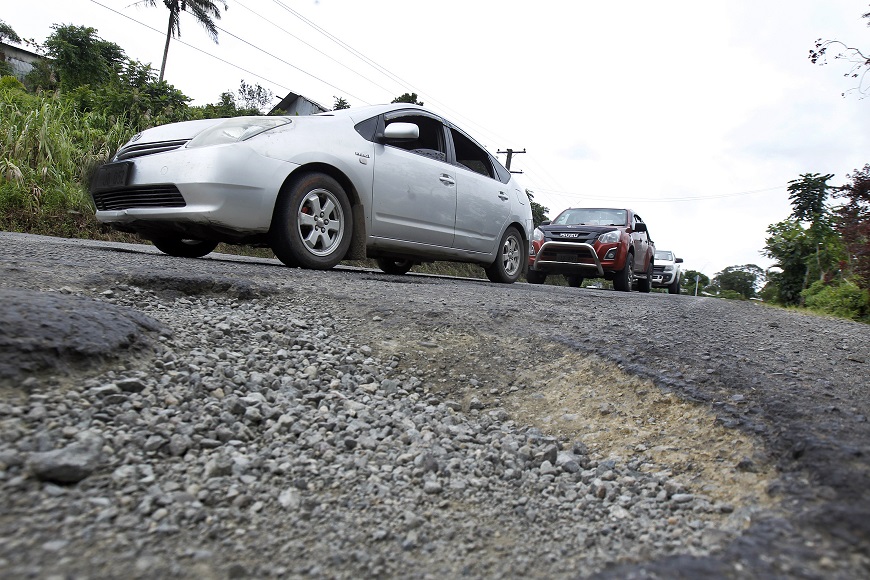 Motorist avoiding one of the many potholes along Princes Road in Tamavua. Picture: ATU RASEA

I agree with our editor-in-chief that it isn’t going to be a walk in the park to fix our roads but at least something could be done to cover the potholes.

I’m paying road levy tax and I feel for my car which has to sustain poor road conditions and potholes.

I hope that Fiji Roads Authority CEO Jonathan Moore and his team will do something to our bumpy pothole riddled roads.

As the editor said, “This is no longer a joke”.

Mahendra Reddy was quoted saying he doesn’t need to worry about sugarcane farmers switching to tobacco farming because the tobacco company is looking after the farmers.

You are wrong honourable Reddy because if sugarcane farmers stop planting sugarcane then Fiji will not have enough sugar for export.

The sugar industry is already not producing enough sugar.

At the moment the tourism industry is basically closed, are you promoting the same for the sugar industry?

I am worried about our export market Dr Reddy and I believe you should too.

Maybe we both Reddys should meet up to discuss this issue.

Coffee or grog will be on me!

It is ironical that in The Fiji Times “Back in time” (FT 20/05) we read that in a report published by a colonial official, RS McDougall, in 1957, he had said: “the Fijians extremely generous nature was a hindrance to their progress” (Report: System must change. Kerekere singled out).

Today in response to the coronavirus pandemic not only the Fijians but people all over the world are embracing the very traditional values of generosity, mutual assistance, reciprocity, community solidarity, altruism that the colonial official had castigated as an obstacle to Fijian progress.

What the Fijians had traditionally were higher-order human values and people are returning to them in the realisation that there is more to life than the rugged individualism and pursuit of progress as defined by modern capitalism.

What the coronavirus pandemic has shown is that the global capitalist system must change!

I write this letter in praise of the Nausori medical team on Saturday (17/05/20).

I was fortunate to observe first-hand an experience I’ll never forget.

There were two attempted suicide cases and the two unfortunate young boys from Naila, Bau, Tailevu who were involved in a traffic accident and a very serious asthmatic case throughout the day.

The whole day was like an episode from the ER series but this was real life and I had mixed feelings of sorrow (I wept a bit after seeing the boys from Naila lying unconscious on the beds) and also a sense of pride enveloped me when I saw the medial team ably led by Dr Jope, a very young man, who must be commended for maturity in handling the cases.

Nurses Kesa, Makarita and Makarena and others for their tireless effort throughout the day.

I won’t forget the doctors from Suva who came to assist —Nausori is proud of you.

I reiterate that it was an experience I only see in the ER episodes, but vinaka vakalevu Nausori med team.

The threat to ocean marine and resources continues to remain an alarming issue and one factor highlighted is overfishing.

We need to address this issue with a strict timeline on when to fish and also restrict our seas and oceans from inundated fishing.

Let’s all stand up and fight the cause and save our marine life with less pollution and overfishing.

I am sure there are many substitutes that can be looked at.

Vinaka and let the talanoa and veilomani begin.

I am sure we all can.

There are 100 trucks that the FSC has invested in, what are they doing when the cane season is not on?

Rubbish is piled up along the roads in Lautoka and may I say — in Nasinu also.

Our good minister wants to increase town and city rates, can the trucks be used to pick the rubbish?

Fuel price has come down, many drivers are out of work, use them.

Every unpleasant situation has some advantages so does the COVID-19 pandemic.

It is a fact now that during the height of coronavirus there has been huge reduction in carbon emission in the atmosphere.

I believe this will bolster the effort of everybody, including the most industrialised nations, to reset themselves in mitigating the effects of climate change.

The Local Government minister wants a swimming pool and a stadium to be built in Nasinu.

I believe four years to complete a swimming pool and a stadium is the same term as having a general election.

I would like to make a request to the minister who announced that the kava price has reduced.

All the farmers I am buying kava from haven’t reduced their prices.

Grateful if the minister could give us the contacts of the farmers who are selling kava for $50 wholesale.

May 4, 2017 was the official groundbreaking of Lautoka Aquatic Centre.

On May 18 this year, I believe it was reported that Minister for Local Government wants to build another swimming pool in Nasinu.

Halfway in 2020 the Lautoka swimming pool is not even halfway completed.

In this time of financial crisis I can only imagine when the swimming pool project will be completed.

Can the Ministry of Local Government and Lautoka City Council make the report on the Lautoka swimming pool project public, after all I am charged special rates for all the projects.

What is it with this government and swimming pools?

They haven’t completed the Lautoka project yet they want to build elsewhere.

Tobacco instead of sugarcane?

So much for the warnings on the ciggy packets.

The tout that the sugarcane industry is the backbone of Fiji’s economy by so many for so long, what of it?

Could EFL let us know how much does it cost them to have all the electricity meters read every month?

As a woman and a firm believer in gender equality, it is concerning to know that there is a rise in domestic violence in the country.

This was confirmed by the Minister for Women, Children and Poverty Alleviation, Mereseini Vuniwaqa (FT 05/05).

The culture of male partners using violence against their female partners is a serious problem in our community.

I believe this has become a grossly rampant issue as more and more women are pushed further into silence and conformity.

In many cases, the male partners resort to violence because they are not prepared to accept the decisions of their female partners for self-autonomy.

It must be made clear that the elephant in the room is not self-autonomy but family violence.

Non-governmental organisations and international aid have been exclusively battling against domestic violence for far too long.

I urge the government to implement strategic laws to ensure that perpetrators are brought to justice.

I believe the government needs to work with non-government organisations to promote equal opportunities.

Strategic planning and awareness needs to be done in order to make Fiji a safe haven for all women.

When driving out from Suva City, the traffic lights near the Suva City library will at some stage display only a green circle.

A lot of motorists use this glitch as an excuse to drive on turning left to MacArthur St.

I have been honked one too many from motorists behind me to drive on turning left.

I took it up with the authorities last year but the glitch is still there i.e. “green circle with neither a red nor a green arrow”.

Is it still there because of the pandemic; no one had died, or is it that no one knows as to when be doomsday, so I should just relax?

I am no law breaker but am not going to fall to the “When in Fiji do as the Fijians do” even if this glitch was there in the beginning.

Now I shall be released.