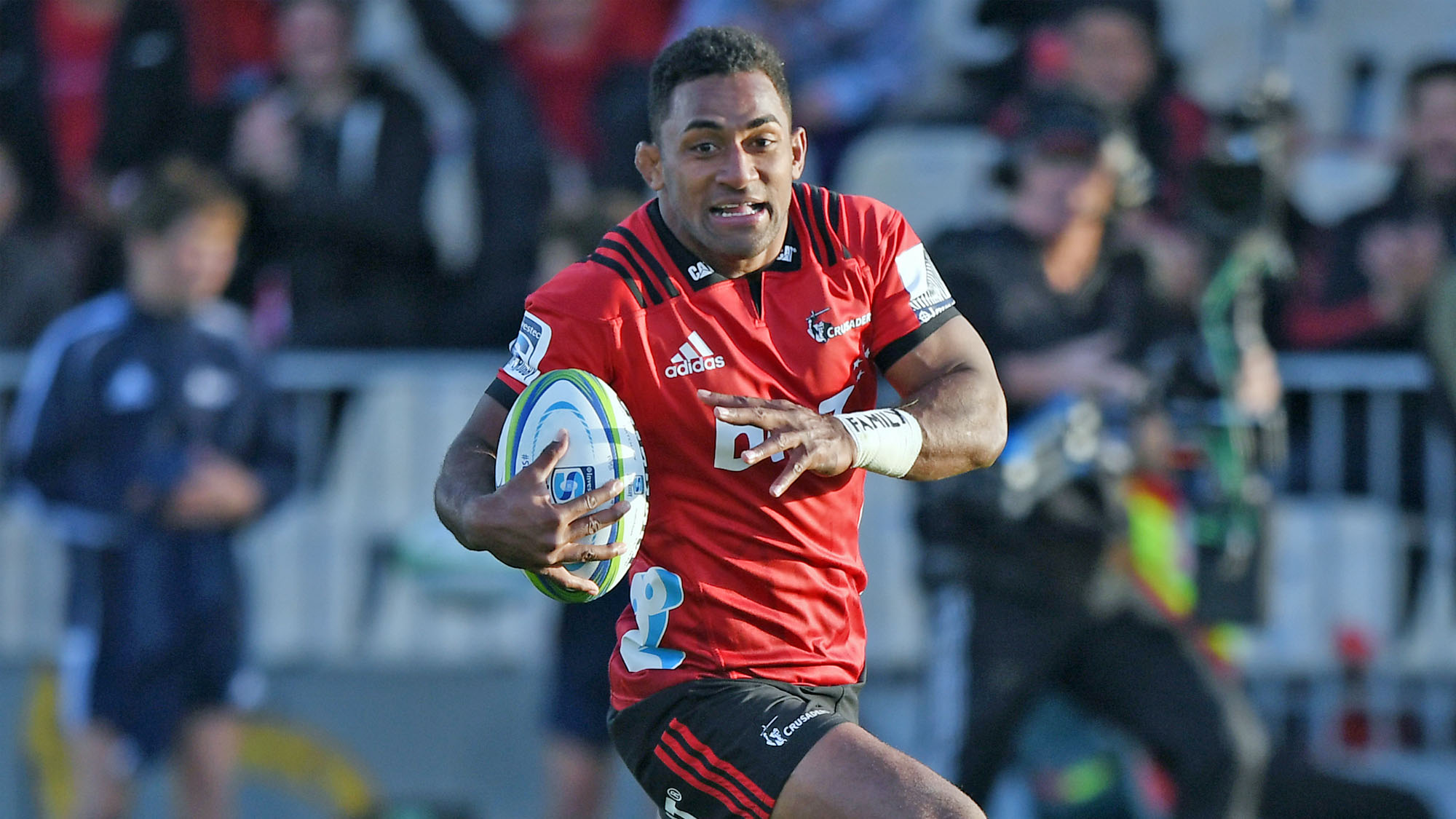 Crusaders wing Sevuloni Reece in acttion in one of the Super Rugby matches. Picture: RugbyPass

Sevu Reece is now the talk of Super Rugby with some mesmerising performances for the champion Crusaders.

Sevu has settled in well and with a load of All Blacks around him in the Crusaders and has been closely nurtured by few Crusaders’ greats the guy has shot off the block.

However, I have a strong reservation on the All Blacks selectors and coach Hansen’s comment that Sevu is under the AB radar.

This is a complete mind game strategy as the depleted AB backline with a few serious injuries is now looking at options.

This will also create a strong competition with undersiege players like fellow Fijian Waisake Naholo and Hurricanes’ Ben Lam who went through the same fame as Reece last year with an explosive start.

Whatever is the case Sevu will continue to remain on the radar and if the Crusaders reign supreme with a treble title win and if Sevu remains consistent and others continue to faulter than he is the man to Tokyo.

However, he will remain in the shadows of Ben Smith and Rieko Ioane and co. and may not get full game time and exposure.

If he joins the Fiji camp he could hit the road to Tokyo and explode from the first game and create his own legacy, who knows he even could be in the mix to the sevens 2020 WC.

Time will tell where the radar points and ends.

Go Sevu for Kiwi or Viti.

Uh oh, it’s a Saturday morning and I see a busy policeman booking all the cars illegally parked along the Market Rd in Nadi where the yellow lines are.

Because the Nadi Town Council car park is always full on a Saturday morning people are forced to park opposite the car park bus stand area.

Can’t see why there need to be yellow lines since the road is quite wide.

And the parking metres don’t go far enough to cover this area.

I appeal to the Nadi Town Council to be sympathetic to your ratepayers and install parking metres further along the road.

But while you are ordering the metres,  scrub off the yellow lines.

Are there other nearby areas you could convert into car parks?

Please be proactive and solve some of the difficulties in the town, the flooding for instance in the same area and why with the one-way alignment of streets there is still a traffic jam?

As the world united to commemorate Labour Day yesterday, I was reminded that Labour Day gives us an opportunity to recognise the invaluable contributions that working men and women make to our beloved nation, our economy and our collective prosperity and it gives every citizen a chance to show gratitude for workers’ grit, dedication, ingenuity and strength, which define Fiji’s character.

As we celebrated Labour Day, it is imperative that we continue to honour also the men and women and workers representatives who have fought tirelessly for workers’ rights, which are so critical to our strong and successful labour force.

Thus, let’s recognise and respect workers and give them the honour that is long overdue to them.

May the blessings of the good Lord be with our labourers!

Are our women and girls safe and living free with fearless lives and who can women trust and turn to since some of the human rights abuse is caused by family members and relatives.

Women are the pride and dignity of the country and their human rights should be protected at all times.

Unfortunately, I believe human rights abuse in Fiji has increased in recent years and is a growing concern in our beautiful paradise.

The most common violations which the Fijian women face is rape, torture and molestation.

Today violence against women and girls is a widespread global issue.

I believe it occurs in every country.

Imagine our own country enriched with traditional and cultural values.

I believe the saddest part in a woman’s life is when the abuse comes from a close relative or the father, someone the woman trusts.

One such rape case was recorded last year on December 14 when a father raped his own daughter and granddaughter.

The father was given a life imprisonment sentence.

I believe parents and children should join hands and become responsible to campaign enough to combat this offence.

I would like to express my discontent towards an increase in the number of road fatality.

I believe speeding is the most common cause of road accidents in Fiji.

Driving above the speed limit is a common practice for many motorists.

The faster a vehicle travels, the longer it takes to slow down in the event of an obstacle.

Some of the other causes of road fatalities are drunk driving and getting distracted while driving.

To conclude, it is necessary to take precautions while driving and always follow road rules.

Those motorists who do not comply with the required standard and laws should not be allowed on our roads and their licences must be revoked.

As I drive through the potholes-laden roads, I wonder which other country in the world builds roads that give birth to potholes every time the heavens pour?

Madam Minister for Education Rosy Akbar has said (FT 1/5) there is a shortage of teachers but not across the board.

However, the shortage is in science.

May I be permitted to ask if this shortage came about because of the 55 years of age retirement?

Or is it really true that people are not taking up science subjects to become teachers?

Anyway, let’s encourage students to take up science subjects for a teaching career.

While we are at it, let’s encourage agriculture and veterinary subjects also.

A common line has developed when it comes to repair costs in Fiji.

People are better off to spend a few extra dollars to purchase a new item than to repair the one they have.

I went to Rakiraki for a family function last week.

With the amount of potholes on the road, my son’s car which I borrowed had two blown tyres, shock absorbers, wheel alignment and some bushings.

I was of the view that since Fiji Roads Authority has an overseas expert who is in charge of them, maybe our roads will be of overseas standard.

Well, yesterday about 5pm in Lautoka, the traffic police double parked in front of a shop and were booking drivers left, right and centre.

My concern is, two wrongs don’t make a right.

Police double parked in the middle of the road and started booking drivers.

Drivers will be paying more to use the road.

I can’t understand why Lautoka City Council is not doing anything about a building on Yasawa St which is next to a supermarket.

So much rubbish inside it.

The biggest thing is that people and students use this place to take drugs and sniff glue.

This building is giving a bad image to Lautoka.

As a frequent bus commuter, I am concerned with poor services provided by some PSV drivers.

I had witnessed in few instances where passengers are being chased from the bus, being growled at by drivers if they tapped with an empty card, tapped the wrong fare at the wrong stage, using the wrong card, asking driver on when bus would be leaving and a few other issues.

On Tuesday (30/04) at about 6.30pm, on my way to catch my last bus, upon asking the driver when he will leave, he growled at me to ask the bus checker.

As a matter of concern, this is an ongoing issue which really hurts, being confronted in front of the public deteriorates emotions, thus, leads to a bad day.

They should realise that passengers are their customers and they should be treated with a high level of integrity.

Using persuasive language should be recommended, with a respectful tone, on the other hand, passengers should be treated with respect.

I urge relevant authorities to assess PSV drivers and their capabilities before issuing them licences, in consideration, PSV drivers should also attain a certificate in customer service skills as part of their assessments.

It is always nice to regularly take the family out for a meal but nowadays it’s impossible to find an above-average eatery that makes eating and dining out special.

Service is non-existent and the meals are just the ordinary same old, same old thing and nothing special at all!

Even traditional dishes are prepared and cooked so bad that it doesn’t remotely resemble or taste like the original dish.

Not only is the quality of the meals poor but the quantity as well is at its minimal. It sure seems like food outlet proprietors are only concerned about one thing and that is to get as high a return as possible regardless of the quality and quantity of their meals.

The question I have is where are the controls that ensure these proprietors are not ripping customers off and that we get what we paid for?

When one looks at the meals being served and how much they are sold for, it’s not hard to work out that many of these proprietors are marking up between 500 and 1000 per cent on each dish.

Serve meals that are extraordinary and that makes it worthwhile for people to eat out!

I suggest that the Consumer Council of Fiji sets forth a food cost factor that proprietors need to adhere to that will hopefully improve the quality and quantity of food outlet meals.