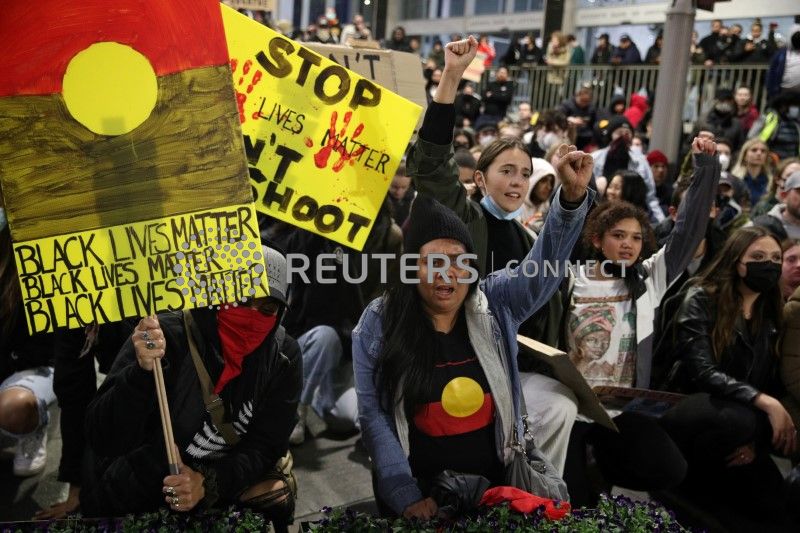 People protest in solidarity with those in the United States protesting police brutality and the death in Minneapolis police custody of George Floyd, in Sydney, Australia, June 2, 2020. REUTERS/Loren Elliott

Peace in the US

The Albert Einstein quote in Tuesday’s Thought (FT 2/6): “Peace cannot be kept by force; it can only be achieved by understanding” is so relevant to the prevailing situation in America where the use of extreme state force has not been able to quell the public outrage and protest raging across the country.

Peace will be achieved when the state comes to understand the meaning of the protest slogan “No justice, no peace” and “Black Lives Matter”.

The people of colour are fed up with the long history of injustice they have suffered from entrenched, institutionalised racism and systemic police brutality in America.

They want that to stop. They want societal change. And they want that now! That’s understandable. They have waited far too long for it.

They want to be treated with the same respect for their civil rights and human dignity as that accorded their fellow white Americans.

Theirs is a legitimate call. That’s how it’s meant to be in a true democracy.

I commend PM Bainimarama’s confidence and the manner in which he said Fiji was going to rise again from the challenge of COVID-19 despite job losses, increased unemployment, drop in income, drop in tourist numbers, drop in exports and flight restrictions.

Yesterday’s The Fiji Times reported that produce exports from Fiji plunged 80 per cent in recent months but despite this announcement and the many other negative news our PM was optimistic that Fiji would rise better, smarter and more capable of taking the nation into its brightest possible future.

It will definitely take time but we must be positive and press forward for progress.

Our PM said: “As fierce as these headwinds may be, we cannot allow ourselves to be blown off course from the nation that we’re working together to build side by side. We must look within ourselves for innovation, and look inwards, within our economy, for new sources of prosperity.”

I’m sure that every Fijian will join hands to curb the effects of COVID-19.

After all, every Fijian wants to see Fiji rise better, smarter and more capable of taking our nation into its brightest possible future.

The onus is in our hands.

When the scale of the COVID-19 pandemic was revealed through the media and played out across the globe, the leadership in Fiji watched very closely and took many preparations and lessons from abroad.

This is evident in the fact that so far no one in Fiji has died from COVID-19.

Touch wood. Now with the protests unfolding across the US and even in many other countries showing solidarity in the wake of the murder of George Floyd there are more lessons to be learnt. First and foremost police brutality is abhorrent and should never be accepted.

Even if we feel it is justified. Secondly, injustice has consequences and thirdly, pay attention to the people. Brushing people aside and regarding anyone who disagrees as a criminal brought the US to where it is now.

I plead with our leadership in Fiji. All leaders, everywhere.

Homes, communities and government. Condemn brutality in all its forms.

From beating children who do not follow commands in our homes to beating civilians in an attempt to serve justice, brutality must be understood to be planting seeds of resentment.

The fruit of this tree? Well just look at America. Justice brings peace. Keep pushing marijuana smokers aside and resentment will keep marijuana on the streets and the jails full of Fijian citizens.

Don’t lose the lessons plaguing the US right now.

Where wisdom is called for, force is of little use.

I wonder if the gang who went to Bonn and those who made the bicycle paths knew about it.

Oh and whatever happened to encouraging bicycles?

And it would be nice if the MPs could cycle to work a few days a week. Just saying.

At least stick to the topic, don’t talk about people.

I cannot remember the last time the cost of a 12kg gas cylinder was in the twenties.

Maybe that old fellow at Kava Place can inform us youngsters.

The ministers’ pay should come to half of what they are getting.

At least for the time being. This helps in a huge way. The other pay cuts should follow after this.

We don’t want the struggling people to struggle more.

Attorney-General Aiyaz Sayed-Khaiyum says the coronavirus pandemic is an act of God.

Sailosi Nauwe wonders if the potholes in the roads around the country are also an act of God (FT 3/6).

I wonder if the coup we had is another act of God.

Can the learned A-G enlighten us?

Some shops are closing in Lautoka City with “Distress of Rent” posted on the building.

Looks like COVID-19 has its ugly face on business houses.

It was supposed to be ‘SOTA TALE.

It’s not goodbye, it’s see you later’ and #STRONGERTOGETHER, but I believe it ended up with LAKO SARA and #stronger without you.

The smile by some of those airline crews speaks a lot about individuals who can hide a lot a lot of pain.

Why has ‘God’ been mentioned so many times now starting from Parliament down to every street corner in our towns and cities?

Before the arrival of COVID-19, there was very little talk about God. Now what?

I am wondering what is the total floor area for both the new Nasinu and Rakiraki markets.

The costs associated is “jaw dropping”.

Am I missing something?

Congratulations to Rakiraki for having a new market that was opened by our PM.

Great achievement for Rakiraki of having this massive market and I guess it’s best for them in rainy weather.

He urges people to grasp the act of God legal definition as he does not want to conclude that even after exposure to research, “the size of the brains of some people are directly proportional to the size of the country”.

While many would find your derogatory remarks humiliating, I can’t resist the temptation to admire your choice of analogies and inclusions when it comes to intellectual capacity and reasoning.

Your selections are quite apt. I remember about your colleague you mentioned who appeared to be suffering from migraine every week (FT 18/04).

While you suggested to your colleague to get a head scan, your boss had cut into the conversation with information that a scan was already done and the doctors said: “There is nothing there”.

Followed by your admission: “It took me a long second to get the joke”.

Mr Nissar, you used a quote as well which is related to ill-informed people in Fiji (FT 02/06).

“Better to remain silent and be thought a fool than to speak and remove all doubt”.

As per the worldometer (2pm Fiji Time 03/06), there were a total of 382,368 deaths because of COVID-19 of which 102 deaths took place in Australia. I’d suggest you go to these families with the “act of God legal definition” from Google to educate and console them.

Do not forget the unemployed and COVID-19 survivors. I predict brain explosion.

The article by the Archbishop of the Catholic Church, Peter Loy Chong, titled ‘Act of God or acts of human’ (FT 03/06) is an interesting read especially with deep reflected questions at the end that needed to be discussed at every level of society.

In my personal opinion, I seriously believe that the many crises and miseries affecting the world today, especially the human race, is not the doing of God but ours, the human race.

What causes a few people to be rich while many struggle with poverty?

We humans are responsible for we create systems and structures that favour the rich and neglect the poor. What causes the economic downturn?

I believe the economic downturn is caused by humans, especially leaders who do not have proper planning for our economy.

We humans are causing unhealthy situations by polluting our environment and creating new systems that favour fast food and do away with traditional food or what is now termed slow food.

What causes the COVID-19 pandemic?

At this point in time there are still no progress in investigations on COVID -19 and how it started, however, I do agree with Jean Hatch in her letter to this column (FT 02/06) that COVID-19 is man made for it came about as a result of our human over excesses with other creatures without care.

In summation, I believe that we humans are putting the blame on God with the many miseries and crisis we face today and are not being honest enough to admit that we are the main culprit.