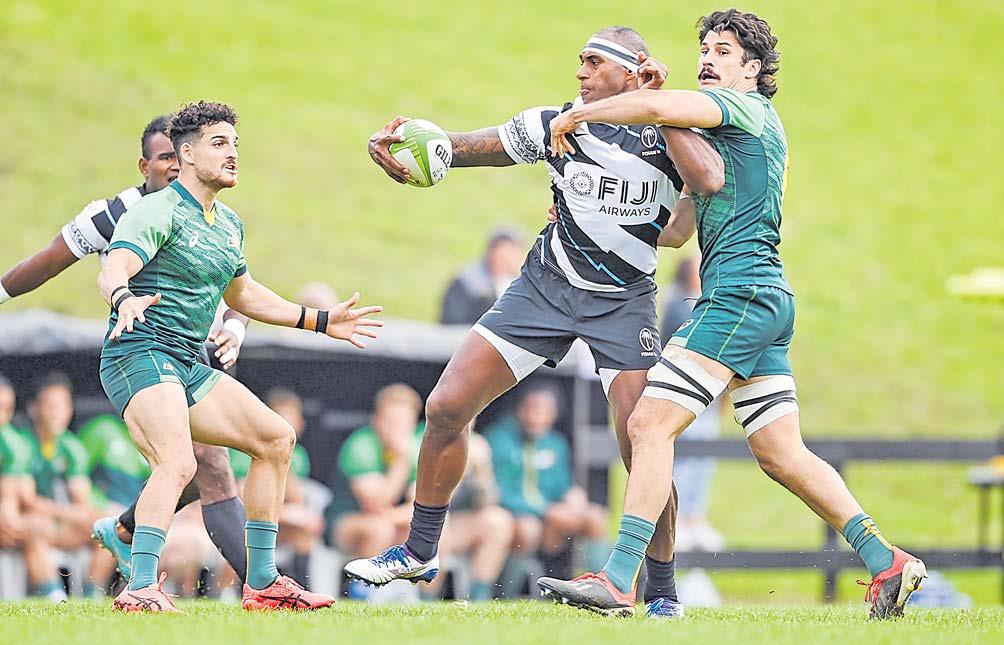 Lessons from the Oceania 7s

Congratulations to the All Blacks for winning the Oceania 7s tournament which was the final hit-out before the Commonwealth Games 7s to be played next month in Birmingham. Fiji lost to Australia A 29-19 and 26-24, and then to the All Blacks 19-5. The side managed to beat Tonga in both matches 24-12 and 47-5, before outclassing the All Blacks 12-5 to conclude the three-day tournament. Valuable lessons should be learnt in a bid to prepare a competitive side for the battle in Birmingham and emphasis must be placed on winning restarts and our own lineouts, converting tries, reducing the error count and the rate of penalties when under pressure, communication and making spot on tackles. Fiji has never won a gold medal in the Commonwealth Games 7s competition and Gollings, Satala and the boys know about this. We have a month to rectify things and then assemble the strongest side to take on the big names in Birmingham. I have faith in Gollings, Satala and our brigade to get home the gold medal. Toso Viti, toso! RAJNESH ISHWAR LINGAM, Nadawa

It is actually very reassuring to note that the workers are getting their much awaited and rightfully deserving increments. Energy Fiji Ltd workers got their 5 per cent wage increase last week while the Tropik Wood Industries Ltd workers received a 4 per cent increase this week (FT 29/06). The entire unskilled labour force in Fiji is due for yet another 33 cents increment to their hourly pay rate this Friday, July 1. It’s all good news, right! Isn’t it? I just sincerely hope that the other employers in Fiji also increase the wages of their employees. But one would wonder why are the increments always happening in the election year and why not every year? Some of us would remember the cost of living adjustment (COLA) payouts that we enjoyed back in the days, a week before Christmas. Isa, the good old days! DINESH KUMAR Ba

The Supervisor of Elections Mohammed Saneem said that because they did not know the date of election, they would conduct another round of nationwide voter registration (FT 29/06). My question is, after they will finish this second round and still they do not know the date of election, will they conduct a third round? Mr Saneem had already announced in April that the Fijian Elections Office had concluded its nationwide voter registration drive and know your election campaign for the 2022 General Election and he was thanking many who had assisted them. According to the stats then, there were 682,569 registered voters, 1471 polling venues and nine registered political parties. Now they want to conduct another round of nationwide registration. How many Fijians do they really want to register? Who is paying for this next round of nationwide registration? I am sure it is an expensive exercise. Kositatino Tikomaibolatagane Vuninokonoko Rd, Navua

Early morning periods contain the quite “fast and furious” type moments. The probability of one being in a rush is high. You know the details. Yesterday morning was not any different for me until power went out. Well at this stage, I do not know if it has become part of the new normal. But this is what I remember with some clarity. I was moving quickly and then “snap”. Blackout! I fell and could have ended up with a black eye. And a knockout. The dogs started barking frantically. Since the door was open, I have a mild confession. For a moment, I thought of crawling under the bed to hide. That didn’t occur. I’d put the blame on good genes. Then “Ting-Tong”. That text message. It said western side. On the last occasion, it was “mother nature”. This time, I don’t know if it has anything to do with “father nature”. Good things though, the sun’s first rays were just starting to appear and I have deliberately stuck with battery-operated radio. An eventful morning for me ended with listening to this song. Duniya ke bhool bhoolaiya … Mohammed Imraz Janif Natabua, Lautoka

It would appear to me that trade union leaders in Fiji have jobs for life. I am not talking just about one or two union leaders but the leaders of all the trade unions in Fiji. They all have been in their respective jobs for 30 to 40 years or more. That is almost a generation. How is it that the same old people are elected to their respective positions year in and year out without fail? How does the democratic process and freedom of choice in the trade union movements in Fiji work? How can those who were required to resign to contest the 2014 General Election, be back in their respective positions after comprehensively losing in that election. The openness and transparency of the whole process is questionable in my opinion. Why am I the only one asking these questions? I
mean, I do not expect grog dopeys to be asking these questions, but what are the rest doing? Or is it because no one in Fiji sees this as a problem? But then, all the union leaders in Fiji could all be angels. JAN NISSAR NSW, Australia

PLAYING a blame game on the past governments on the issues of poverty, health system, current power and water cuts by the Attorney-General, Minister for Health and Minister for Infrastructure is a pure conviction that the present Government cannot fix the problem in front of them. Come what may, ministers, don’t stoop too low pointing fingers at others because I know that is not the real you. If 16 years in governance is not enough than how many more years you think your ministries can become the saviour of the people to fix the problems? Stop making noises and do what you are paid to do, fix the problem and serve. AREKI DAWAI, Suva

How can the A-G expect foreign tourists to access our medical amenities when most of our local populace have lost confidence and credibility in our “top notch” hospitals many moons ago? (FT 29/06). Treated like experimental guinea pigs, I believe numerous patients have appallingly succumbed to mysterious deaths at our major health facilities either through gross medical laxity, incorrect medical diagnosis (based on trial and error) or through botched surgeries performed by our so-called “specialists”. Many individuals have also been prescribed improper medication by certain “Google” doctors fresh out of medical school who are religiously dependent on their mobile phones to offer a swift cure to throngs of sickly individuals lined up at the often filthy outpatients department. I also vividly recall the case of that young American couple who died under shadowy circumstances while on holiday at a resort in Denarau back in 2019. To date and sadly, Fiji authorities opt to remain mum on the couple’s actual cause of death while their bereaved family members wait in agony for a conclusion. I believe this and many other similar health mishaps of the past have shamefully portrayed Fiji’s medical fraternity in a negative way on the global front. Forget this absurd concept of endorsing medical tourism for now Mr A-G. I suggest you alternatively and immediately assist those vulnerable poverty stricken families, including children, who are desperately resorting to scrap yards and roti parcel sales to put a decent meal on the table. And your abhorrent indication of Fiji’s poverty crisis and analysis is indeed laughable to the core. The reality of the matter is, you are only making a mockery out of your egotistical self. Nishant Singh Lautoka

‘The Bus’ gears up

Vern Cotter has big names in his mix. Cotter has an explosive backline in Josua Tuisova, Seta Tamanivalu, Wise Nayacalevu, Levani Botia, Frank Lomani, Teti Tela, Vilimoni Botitu, Apisalome Vota, Vinaya Habosi, Kalaveti Ravouvou and Jiuta Wainiqolo and an experienced and robust forward pack in Eroni Mawi, Sam Matavesi, Mesulame Dolokoto, Manasa Saulo, Apisalome Ratuniyarawa, Albert Tuisue, Rusiate Nasove and Mesulame Kunavula. The Flying Fijians have an added advantage — they will be playing in front of their fans against the Ikale Tahi also laced with the Tongan flair and power. The Likes of Charles Piutau, Israel Folau and Malakai Fekitoa will spur the Tongan onslaught and fans should expect crunching and exciting moments. The Fiji v Tonga rugby battles have left a lasting impression and the one at the ANZ Stadium on Saturday will set Fiji’s platform for the Autumn Test matches and next year’s RWC in France! Seeing “The Bus” in full flight during the team’s training session (FT 29/06) adds thrill to the big battle. Rajnesh Ishwar Lingam Nadawa, Nasinu

Don’t the unsuspecting electorate deserve to know how exactly those vying for government intend to manage the economy? Show us the expenditure and how the money will be raised. Otherwise, pick up your marbles and go shoot in a dark alley. Samu Railoa Nadi

Cars driving fast, buses and trucks beeping loudly, motorbikes speeding on the main highway, car accidents happening on every road, ambulance sirens heard speeding on the highway, victims being caught in any road accident, Well? Is it still that scary? Do we still have to apply road safety rules in our everyday lives? Kelepi dakuiyaco Waikalou, Serua

The recent power disruptions have been very concerning especially if it happens late in the night. Without the inclement weather, there could be two reasons for this, either because of the aging infrastructure or the demand for power is such that it outstrips supply and is putting pressure on the current system which makes it unsustainable. Pranil Ram Votualevu, Nadi

In 2005, the then SDL government did a piped water project in Verata, Nausori. The project lasted for six months and we got piped water supply in December 2005. For close to 200 house settlement, nobody was there to officially commission the project as they probably knew it was part of their job to help people and move on. What amazes me now is even for 20 houses, ribbon cutting, speech, grog, entourage from government side and loads of PR is a must. Sharveen Chaudhary Verata, Nausori

So far NFP is picking up momentum. A little birdie tells me it may take onboard a drop kick of former FijiFirst. Trust me it will be the biggest downfall if they do. You don’t know I tell you. Moses Mani Auckland, Nz

So EFL made a handsome profit, suddenly power cuts. Me, how did they make the profit? Maybe from all the power cuts. Allen Lockington Kava Place, Lautoka

people and companies can donate up to $10,000 to a political party, can they just donate $100 towards poverty alleviation? Sukha Singh Labasa

It’s so different, cup noodles in European cities compared with the salty ones they sell at home. The only similarity is adding hot water. Dan Urai Lautoka