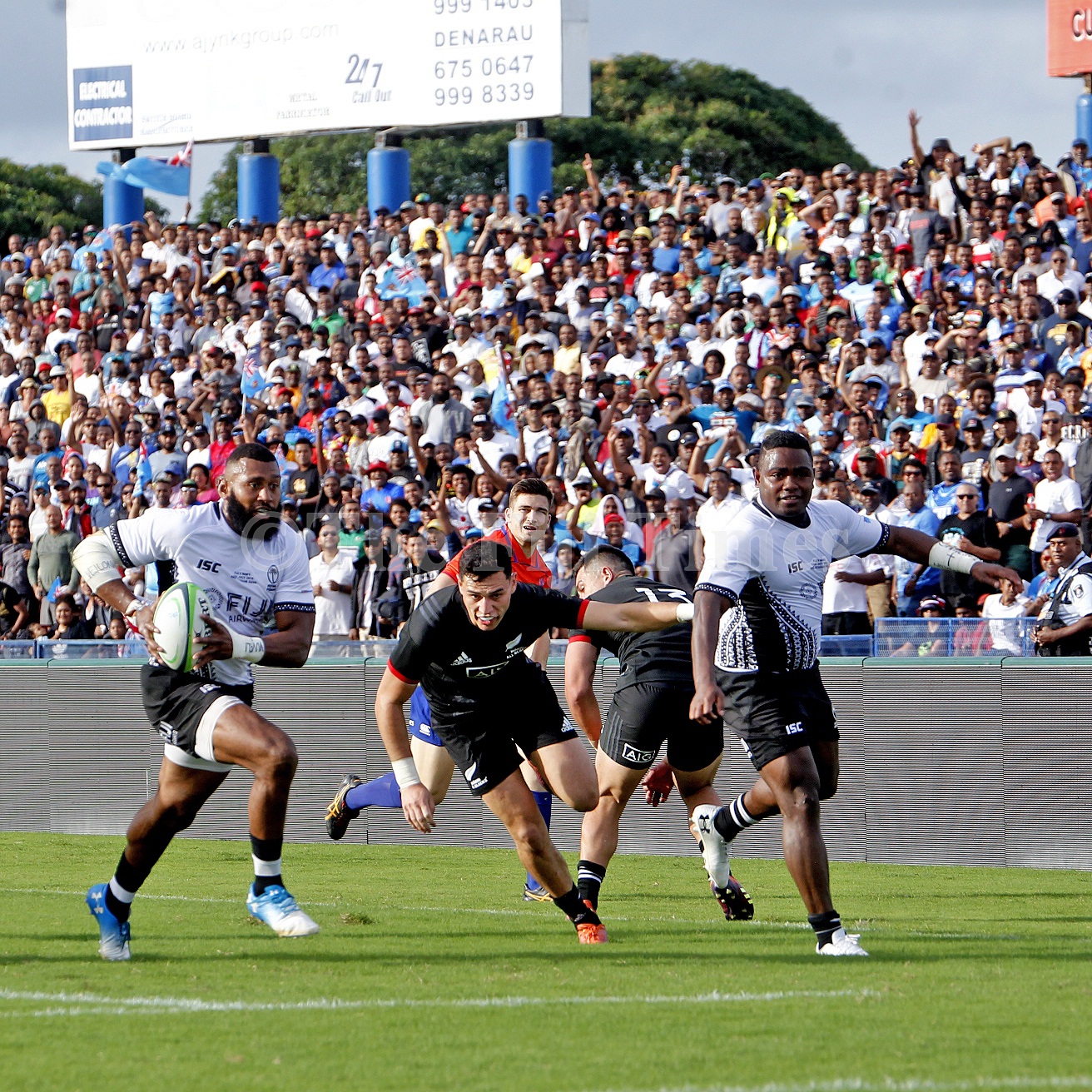 The new word on the streets –– Te utu, thanks to The Fiji Times!

The wounded Maori are hungry for revenge and that gives our Flying Fijians a good reason to inflict more pain and misery in the heart of Rotorua and in front of their ardent fans.

It’s good that McKee is keeping his running team close to his chest as this will give our opponents a headache.

Coach Clayton McMillan will rely on the Maori to spoil our free flowing and enterprising rugby but it’s not going to happen as our Flying Fijians have found their rhythm and have accepted another crack at the Maori in their hometown.

I read Dr Nawi Rakuita’s article in The Fiji Times of July 13 with interest.

Incidentally, I also enjoyed reading Professor Wadan Narsey’s and Stephanie Datt’s articles in the same publication which contain much common sense and humanity.

Regrettably, politicians all over the world emphasise the differences between us members of the human race such as racial, religious, tribal, ethnic and cultural, exploiting people’s fears and insecurities, rather than our similarities, the main one of which is that we are all human beings with similar aspirations.

Fiji is now my home.

Whenever Fiji plays England in any sporting events, I support Fiji but whenever England play Australia or anyone else, I support England, if this has anything to do with loyalty and integration.

What a better place the world would be if we all concentrate on our similarities rather than our differences, while respecting those differences which are important.

We could then judge individuals on their characteristics and values such as honesty, tolerance, integrity, humanity and respect for others rather than the differences which are often superficial.

Or am I coming to this conclusion from a relatively privileged position?

No doubt people will be upset with the Fiji netball team.

Were we prepared when we went to play?

How good is the coaching staff?

What about fitness levels, were we OK?

The price of vacant housing lots and the cost of construction of a house is so great that in the long run with the current situation I believe it is cheaper to rent then to try to buy or build a house in my opinion.

As an example (which is again very conservative): Let’s say the price of a 400 square metre or smaller piece of housing land would be $40000.

The cost of construction of a two-bedroom house would be $100,000 (current quotes by contractors).

If $20,000 is owner’s deposit or financing through the Fiji National Provident Fund, then $120,000 has to be obtained through a bank/commercial housing loan.

With the interest and mortgage protection insurance or other loan security which is mandatory in most cases, another $100,000 approximately is payable on top of the loan taken (again I believe I am being very conservative and taking minimum values).

If one expects to repay the total loan and associated interest and mortgage protection insurance charges and fees of approximately $220,000 in 20 years then one must pay a total of $11,000 in a year which equates to about $916 a month.

This sir is $916 a month for a two-bedroom house which the owner is going to occupy and which will be fully paid for after 20 years.

Now looking at this amount and the cost of renting a two-bedroom house/flat currently, my perception is that it is better to rent than to build.

And if one is lucky to occupy a two-bedroom house/flat for $700 or less and with the current residential rental freeze in place, pray you as a tenant are able to occupy that flat long into the future.

I rest my case believing I still have not done full justice to my analysis and which I am sure the experts out there can help with.

Personally I through my analysis think it is cheaper to rent.

For those landlords who have recently bought or built houses and are giving on rent; I to some extent can understand why they want to rent out the flat/house at an initial high price.

This is so they can recover costs and not suffer losses.

Profit? I don’t see much.

Maybe once the property is paid for or when the property valuation goes up and it is sold in the future at a higher price. i look forward to feedback from other readers of your paper.

Congratulations to Fiji’s track king Banuve Tabakaucoro for completing a hat-trick on the tracks at the Pacific Games.

Our hero also broke Samoan hearts as he dashed past the favourite Jeremy Dodson.

It was also a delight to see former sprint king Jone Delai congratulate Tabakaucoro who broke down after his record-breaking sprint.

Job well done Banuve, and thank you for the treble!

On the other hand, PNG sprint queen Toea Wisil proved too strong for Fiji’s Heleina Young to defend her gold medal and I believe that it’s high time that we train our athletes to win gold in the women’s 100m race.

Yesterday’s thought: “Cherish the natural world because you’re a part of it and you depend on it” (FT 17/7) are the thoughtful words of world-renowned naturalist David Attenborough.

As a relatively new arrival we are not at the centre of the universe although there is a tendency to think we are.

If we do not cherish the natural world then we will perish (become extinct) the same way so many species have perished on account of our environmental vandalism.

Gamel says “only God knows what’s next for the Bula Boys”.

But everyone knows what’s next for you: the exit door.

I believe you have pretended long enough.

They say “fake it until you make it”, but you didn’t make it.

Recently we have seen that some of the new buildings have used cladding to give a very good appearance.

However, have these cladding’s been tested for not being combustible.

You may remember the fire in London apartments when the claddings caught fire and how fast it reached the top floor and as a result so many people perished.

Do we have any way to test these claddings to prove that they are fireproof.

Let us be safe and steps must be taken to avoid any mishaps in the future.

I believe democracy is not about winning elections, it is about accepting defeat.

Oh no! Samoa 55 Fiji Pearls 54! Fourth loss in Liverpool! Shocking! Any reasons for our loss?

Mandela Day, celebrated on July 18, is an annual international day adopted by the United Nations.

It is more than a celebration of Nelson Mandela’s life and legacy, it is a global movement to take his life’s work into a new era and change our world for the better.

Mandela Day asks us all to “Take Action; Inspire Change; Make Every Day a Mandela Day.”

How to get involved.

The overarching objective of Mandela Day is to inspire individuals to take action to help change the world for the better, and in doing so build a global movement for good.

Each of us can make a small difference.

If we all make a difference together, our collective effort can truly change the world. Mandela Day is not a holiday.

It is a day for all of us to opt into humanity –– to roll up our sleeves and play an active role in building our communities.

This is an opportunity for each of us to share Nelson Mandela’s vision of a better future for all.

Quote –– “It is time for the next generations to continue our struggle against social injustice and for the rights of humanity. It is in your hands.” –– Nelson Mandela

By becoming a Mandela Day changemaker and doing something that affects positive change every day, you can show that actions speak louder than words.

I believe the handling of the mysterious deaths of the US couple was not only a public relations disaster for government as claimed by National Federation Party (NFP) leader Professor Biman Prasad (FT 17/07), but a total disaster.

Such cases should be dealt with in an urgent respectable manner. Instead of two months it should have taken just two weeks maximum to have the couple’s bodies returned to their families back in the US.

The longer it took the worse it got. We basically lacked efficiency and urgency dealing with this case. Success or failure is often determined by those who are in charge.

We need to learn from this failure and be better organised in determining the causes of death and the repatriation of bodies to their country.

National Federation Party leader Professor Biman Prasad’s choice of word to describe the handling of the mysterious deaths of holidaying couple David and Michelle Paul is “American like”.

“Disaster” is one of the favourite words used by the American president.

It would be absolutely no surprise if Donald Trump also declares the information sharing exercise a disaster.