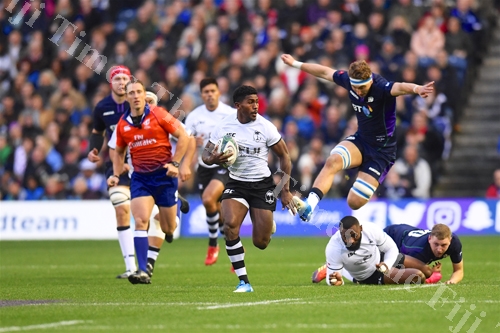 It’s a delight to read that there is a high demand for Fijian rugby players around the world.

The likes of Albert Tuisue, Frank Lomani, Alivereti Veitokani and Mesulame Dolokoto played gallantly for the Fiji Airways Drua side and have secured contracts with prominent rugby clubs.

This means that the standard of competition locally will intensify as our local ruggers know that they are on the radar of overseas clubs and no wonder the Skipper Cup and Farebrother Cup matches are producing desired results and our younger players are securing their future with lucrative rugby contracts offshore.

Good on you FRU for the much-needed change that has given Fiji rugby limelight.

I’m just pleading with FRU to help players make the right decision so that they play for clubs which are competitive.

The 2019/2020 National Budget opinion piece by NFP leader Professor Biman Prasad “No talk on ‘no money'”; by USP academic Dr Sunil Kumar “Boom or doom” and by former PM and current SODELPA leader Sitiveni Rabuka “Disappointing budget” in The Fiji Times, I believe, would lead a thinking person to ask whether the Economy Minister Aiyaz Sayed-Khaiyum has been economical with the truth regarding the state of the Fiji economy under the stewardship of the current government?

The Fiji Times must be applauded for providing the democratic space for these alternative opinions on the national budget so that the public is better informed on this issue which impacts on their lives.

The Fiji Independent Commission Against Corruption (FICAC) investigation process not only begs a few questions.

I believe policies ought to change to protect individuals against defamation of character.

Complaints were made about me for several allegedly corrupt offences.

Through my accountant and lawyer, I had to divulge all my financials and answer many questions about my financial status.

After several weeks I was informed by my accountant that FICAC had returned with their findings.

He was told to inform me that my financials were clean and that I had committed no offence.

Here is where the problem lies!

Not only was the experience embarrassing but I knew that I was clean and I know I did not commit financial fraud.

I don’t need FICAC or anyone else to tell me that.

I am certainly no crook, well, apart from a few silly petty things I did as a youngster.

I immediately requested through my accountant and lawyer to know from FICAC the person, people, or organisation that lodged the complaint against me as this is straight out defamation of character.

I was told that complainants were protected under FICAC’s Prevention of Bribery Act Section 30A, whereby information which could lead to the identification of the whistleblower is granted full protection.

The Act should also state that if the accusation was false and I was found not guilty, I should have the right to know who complained.

It’s one thing to be found guilty and it’s a totally different situation when one is found innocent.

Where is the justice in this?

To avoid the traffic congestion and the introduction of the Suva-Nausori ferry service, will the fares be close to the $1.50 bus fare in place at the moment?

I doubt very much the fares will be cheap as ferry operators will want to survive also.

In Hong Kong, a travelling card which included ferry, bus and train fares might be a way to go.

But comparing the population we might have a shortfall of passengers most times.

Fares will have to be reasonable so the public to be satisfied and happy.

A big vinaka vakalevu to the staff of the Lautoka Hospital for the services rendered to my daughter Manavesi.

To the doctors, nurses who had a smile for us and explained things that put us at ease, to the orderlies, the security personnel from Grid Security for being very polite when visiting time was over.

A special thank you to an employee (who overheard us) of Eagle Cleaning contractors for offering her Digicel mobile phone to us when we wanted to make a call to a family member but we couldn’t because we had no funds on our phone.

We have been talking about good customer services, I experienced it firsthand.

God bless you all and keep up the good work, and that folks was customer service at its best all-around top to the bottom so to speak.

Someone at FFA is joking about fines that have been imposed on our soccer players.

Had we been serious with player discipline from day one, we would not have seen this day.

It’s funny how FFA suspends and fines a player and a district appeals and pays the fine, and the suspension is waived.

Let’s be serious about suspending and putting a fine if we want to improve discipline!

After experiencing a painful loss to Suva, Nadroga will have one chance to regain its status as rugby champion when it clashes with Nadi later this week.

Whatever one’s views, this will be a western battle between to neighbouring sides and tempers are likely to flare if the referee is not quick to control the game.

In the meantime, looking forward to a strong performance by Nadi.

Meanwhile, no surprises with Sevu Reece being included in the All Blacks squad for the World Cup.

In Suva, our Flying Fijians are preparing for an important clash against the New Zealand All Blacks Maori side.

When I read (FT 02/7) that “The Fiji Government is not responsible for the release of the bodies of US couple David and Michelle Paul ….” and, “….. but right now don’t know where the bodies are kept, either at Lautoka Hospital or in Nadi, I really don’t know,” the song by 4 Jacks and a Jill came to mind, It’s a strange strange world we live in Master Jack.

I believe the different reply from two government departments regarding the call to release bodies of the US couple necessitates improved communication within government.

There are many roadside hedges in Fiji which decreases visibility of vehicles and pedestrians.

This is an obstruction especially around bends and at junctions.

I do not have any idea if there are special laws to govern the ideal height of these hedges.

Simon Hazelman is unknowingly, reading the minds of many doctors and nurses in Fiji.

He is outright saying what we are thinking at the workplace.

The term “unhealthy habits” and “lack of discipline and willpower” certainly highlight the current state of many in the general population.

There is one particular demographic of people in Fiji who are defining their lives on “unhealthy habits and complete lack of self-care” and as such they frequent our health centres on a daily basis, in the masses.

Whether it’s a simple headache, or just a runny nose or a 1mm pimple on the forehead, this group does not know what self-care is and want a doctor to look at these big, scary medical conditions.

The iTaukei population, however, I feel, holds great promise and potential in achieving a high level of health and achieving quite possibly a disease-free demographic.

At least free from common conditions such as hypertension, obesity, gout and diabetes.

For the average iTaukei person, eating healthy food and exercise are natural habits that were overturned when they started eating roti and curry and the “screens” came.

The screens are TV, laptop and smartphone screens.

Movement, a zest for life, healthy glowing skin and a natural appetite for root crops, vegetables and seafood are encoded in the iTaukei DNA.

We need to invest more into iTaukei health as this is one demographic of people who can, if guided well, achieve great results.

As progress on repairing the Rakiraki Town/ Vaileka bridge is in progress, there is more that could be done for the betterment of Rakiraki and its people.

There is always risk of flooding, inaccessibility and trade downfall in Rakiraki Town.

The river canal that comes from Waimari needs to be cleaned and broadened.

If the various responsible ministries/stakeholders come in conjunction with a plan and agenda to properly fix a dilemma that has been haunting Rakiraki for ages, with proper planning and a future insight, this project can be a success not just for today but for the future as well.

There is already a traffic diversion to accommodate the flow but why limit the progress to the bridge.

If progress is made to the “Next Gen” level then it would set a remarkable standard towards one of Fiji’s hottest regional places.

Newly-fixed roads and footpaths, renovated buildings, healthcare, businesses and many more services can benefit if proper planning is initiated before any commencement of work.

There is a concern of money but even the smallest aspect can arise to a majority.

Why limit, why adjourn?

Do it once, do it right!

Archbishop Peter Loy Chong of the Catholic Church of Fiji stated that we needed a church that acted correctly and that the synod would guide us to follow closely the heart of God.

As far as I know, there is only one book that will guide us surely and closely to God and that book is the Bible, written and inspired by God himself.

If we claim to follow Christ we should trust in the scripture as confidently as Jesus and his apostles did.

The Bible is the ultimate guide for life!

There should never be another?