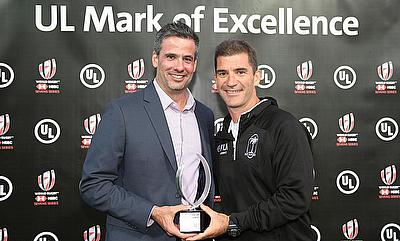 In Cape Town it was burly “Boom Boom” Barrett while 7s Guru Gareth Baber had the last laugh as he walked away with the Mark of Excellence Award at the closure of an epic and entertaining two-day Hamilton 7s.

Gareth Baber did not enjoy his first year as national 7s coach and copped a lot of criticism as he got one win in the 2016-17 WRSS; first creating history last year to guide Fiji to five cup titles and equaling the record set by Ben Veidreyaki and the late Master Epeli Lagiloa in the 1999-2000 IRB 7s series.

He has built a good relationship with our boys and his philosophy continues to reap rewards.

He was compared with Ben Ryan but the Welshman is slowly gaining his ground and if he can get the WRSS crown and next year’s Olympics gold medal, trust me he will be worshipped.

But for now I believe winning back to back tournaments in the same leg remains our dream and Baber’s top most priority!

Finally, after Seru’s wonderful reports and articles, I believe it’s time for Jo Makaba and The Fiji Times to bring some delicious stories from the Spotless Stadium in Western Sydney where fans are expected to come out in large numbers and offer tremendous vocal support to our Hamilton 7s heroes.

Government initiatives in providing essentially free education for pupils up to the age of 17 or so are laudable.

However, are there laws and/or procedures in place to ensure all those of relevant age attend classes full time?

Along the Tavua streets during school hours, a common sight is people of school age, 13 plus in age, mainly girls, wandering around aimlessly.

Commonly these girls are being kept out of school to care for infants in their own homes, or other people’s residences.

Not only are they missing out on education, they are not capable of caring for infants properly and leave themselves prey to various types of assaults.

The incidences of sexual assault, rape, teenage pregnancies are rising, how much of this is because of non attendance in school?

If my points have any relevance, maybe the relevant authorities will act.

The Naivorovoro Rd in Nakasi has deteriorated to such a deplorable state that it has become extremely difficult to drive on that road.

At a number of places, large potholes span the entire width of the road, presenting immense difficulties to drive over them, and causing considerable damage to vehicles that need to cross them every day.

I have been raising this issue with the FRA and the Housing Authority of Fiji for more than two months now and the situation has still not been rectified.

In correspondences with them, the FRA informed they would not repair that road as Housing Authority of Fiji had not handed over that road.

I then wrote to Housing Authority of Fiji who initially informed me that they had sent teams to carry out maintenance works on the road, but when further confronted admitted that they would require budget realignments to carry out the works.

They further informed that FRA had prohibited them from filling potholes, however, when I managed to establish from FRA that they had not done so, and there was no restriction from doing temporary repairs while funds were sourced for more substantive work, the Housing Authority of Fiji ceased communications.

The road continues to deteriorate further and has become hazardous to drive on.

After every heavy downpour (which is frequent), it continues to get worse and there is nothing being done about it.

I understand that both FRA and HA are state entities.

FRA receives a huge budget every year to build and maintain roads.

If HA is having budgetary issues, why can’t the two state entities interact on and resolve the issue so that the road services are not subjected to a large number of people with such great inconvenience.

I hope that the stakeholders will take prompt action.

I am having to resort to the media to raise this issue as I have exhausted going through the channels at FRA and HA, and nothing has been done.

The reported feedback from the people of this country in the media on the difficulties they encounter on a daily basis regarding the use of the e-ticketing system is becoming serious and calls for Government intervention.

I believe it has become increasingly clear that not enough studies were carried out before the new system was forced on the people.

Could the new CEO for LTA look into this urgently as people are suffering unnecessarily?

I beg to differ with the PM’s statement “placing a person of different faith as head of a faith-based school would have no effect or impact on religious teachings and gathering which has always been part of that school” (FT/30/1/19) for obvious reasons.

It’s a sad truth, that the life expectancy of average folks these days are reduced, because they’re unable to field the high medical costs needed, so some invest in a medical insurance policy to be able to assist them when and if needed, yet again they’re disadvantaged because of not having the higher medal cover and the waiting period for these institutions to make a decision for treatment is substantial and sadly some pass on, while waiting.

I believe some responsibility must be held by these institutions as premiums are paid upfront while support and service isn’t.

One of the worst parts of going to a few government websites is when you lodge a complaint using an email contact posted there and it bounces back saying, unknown user.

And if someone in authority wants to know which websites I’m talking about — Look for it!

After completion of public consultations, I believe contributors remain anxious to know if their suggestions made any difference.

Once the latest consultations will be over and the final documentations or enactments end, I wonder how many contributors will be left disappointed.

Sevens fans were overjoyed with the victory in Hamilton.

It put smiles on many faces.

Now what else can the fans offer?

I got an idea!

I call on our good PM to levy a saqamoli to each taxpaying citizen.

After every tournament the collected amount to be shared evenly among the players.