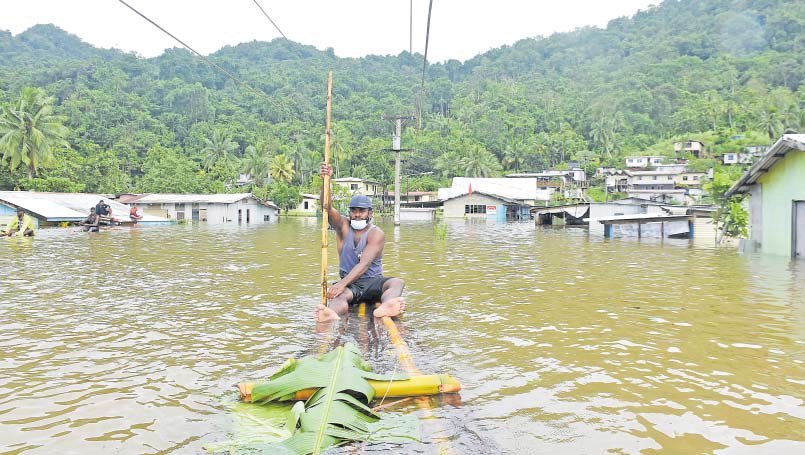 Our hardworking journalists have been working round-the-clock to update us on news and stories from the impact of the flooding.

While we have been in the comfort of our homes and loved ones, they have braved atrocious conditions to get the latest.

The editor-in-chief has also gone late night on social media to ensure we have a preview of the next day’s newspaper.

Flipping through the pages of The Fiji Times, I was saddened to see the devastation caused by heavy rain and strong winds.

Pictures from Wailotua No.1 Village of homes, which were inundated with floodwaters were alarming.

Fijians were captured crossing flooded roads via boats and the bilibili. A gentleman, who was pictured on the front page of The Fiji Times (12/01), resorted to a tube ride.

The flood has damaged infrastructure, property and farms.

With heavy rain and flood, diseases and sicknesses are bound to hit us and we must take precautionary measures to protect us from dengue fever, leptospirosis and other water-borne diseases.

Authorities must also take into account the safety of the vulnerable group located in the various evacuation centres.

With the third wave of the virus now inflicting chaos on Fijians, our Government is adamant that it will not seal borders or initiate community lockdowns despite the vile threat the Omicron variant poses to Fiji.

Some of the government’s current strategies to combat the virus is by limiting social gatherings to 20 people and restricting passengers in public service vehicles.

Yet on the contrary, we opportunely continue to usher in international flights jam packed with tourists, some of whom I believe were tested positive after arriving into the country.

I believe our leaders have taken hypocrisy to a whole new platform by sadly prioritising foreigners and the economy over the lives and welfare of locals amid this volatile situation.

Perhaps Tourism Fiji could roll out a “Shun the locals” campaign since we don’t matter anymore.

We never did. NISHANT SINGH Lautoka

GRAHAM Leung described his former colleague the late Nainendra Nand as a man of principle and a lawyer who stood up for the rule of law (FT 10/1).

Former solicitor-general Nand was one of the victims of the 2006 coup. His refusal to be part of an illegal regime brought his promising career to an abrupt end.

For he knew that it would not only be morally and ethically wrong but also against his conscience to continue in his position as SG.

As a man of honour and integrity, he stood steadfast to his conviction and duty as an officer of the law and chose to resign.

And there were so many others who met similar fate.

I salute you sir for your courage and sacrifice. SELWA NANDAN Lautoka

After being announced as the head coach for our men’s 7s team, Ben Gollings jetted into the country on Sunday night and is in quarantine.

The former England 7s captain’s trip to Fiji was delayed by the arrival of his new born, but I’m sure Gollings is ready for the ultimate task ahead of him. In his absence, Saiasi Fuli has been managing both the men’s and women’s 7s teams and I accord a big vinaka vakalevu to Fuli for handing Ben his help and assistance.

Excitement is high as Ben prepares to take over from Fuli and Gareth Baber.

Ben has the Malaga 7s ahead of him and then the RWC 7s tournament in South Africa and the Commonwealth Games 7s in Manchester.

Ben is no stranger to Fiji having being the chief guest during the Coral Coast 7s tournament.

Can’t get a coffee and toast in the comfort of your own home. I believe we have become far too dependent on one energy provider that is struggling to deliver (minus a tropical cyclone).

I believe not good enough by the EFL monopoly.

Has complacency really set in? I hope not. RONNIE CHANG Martintar, Nadi

It is quite disturbing to take note that we have anti-union (especially Fiji Teachers Union) elements in our society who without being members themselves are trying to undermine unionism.

I believe the Fiji Teachers Union is the only platform for sustainability of individual members when they become victims of conspiracies and nepotism.

This will only be realised by those who have suffered as such. I have seen many of our colleagues succumb to their own ego only to realise the importance of unionism in any democracy.

Teachers union has been actively involved in assisting our student population, especially the vulnerable during such a need not only in the aftermath of natural disasters but at any point in time within its sustainable abilities.

These forms of assistance have reached our dear students in areas unreached by numerous other agencies without seeking credits.

To all anti-FTU team members, please be courageous enough to become a member and let a portion of your subscription be utilised to assist the vulnerable students in our society collectively. Otherwise, just stick to your ideologies until you can.

FTU has been in existence for decades and still stands tall with barks and growls from all sides.

FTU colleagues, let’s be professional and forgive any such elements henceforth as they do not know what they are talking about.

We do care not only for members but non-members as well as evidenced in the past. DHIRENDRA PRASAD Lautoka

By the way, the jumping of ship by Ms Lynda Tabuya should not surprise anyone.

It was expected. KIRTI PATEL Lautoka

I believe people who are questioning the whereabouts of the PM and the A-G at a time of national crisis brought about by covid and cyclone flooding (“Opposition: PM, A-G absent in time of crisis” FT 12/1 ), fail to appreciate that the PM and his right hand man have more important matters to focus on like strategic planning for the next election to maintain their hold on power. RAJEND NAIDU Sydney, Australia

This was a news item in the New York Times yesterday. A man received a new heart from a genetically-modified pig — a medical first that could change the outlook for patients needing organ transplants.

This has confirmed my long held belief that men are pigs not just in their behavior but anatomically too.

I am sure the pigs are justifiably insulted.

Was this what prompted Mark Twain to say, “The more I see men, the better I like dogs?” ARVIND MANI Nadi

I was just thinking. How many new faces would make it into Parliament after the 2022 General Election? MOHAMMED IMRAZ JANIF Natabua, Lautoka

The Minister for Education should have acted more responsibly when re-opening schools.

As predicted, I believe she is helpless to do anything about it apart from passing the responsibility back to parents and teachers. DAN URAI Lautoka

I like to thank Ben Ryan and Gareth Baber for winning the Olympics gold medals and moving on.

Ryan could have stayed back and win his second Olympics medal. Baber did the same.

But here in Fiji, we have people who want to keep their positions for life. SUKHA SINGH Labasa

2022 started with a cyclone and flooding, hopefully the election in 2022 will bring more good than bad.

I for one can’t wait for the dates of elections. NARAYAN REDDY Lautoka