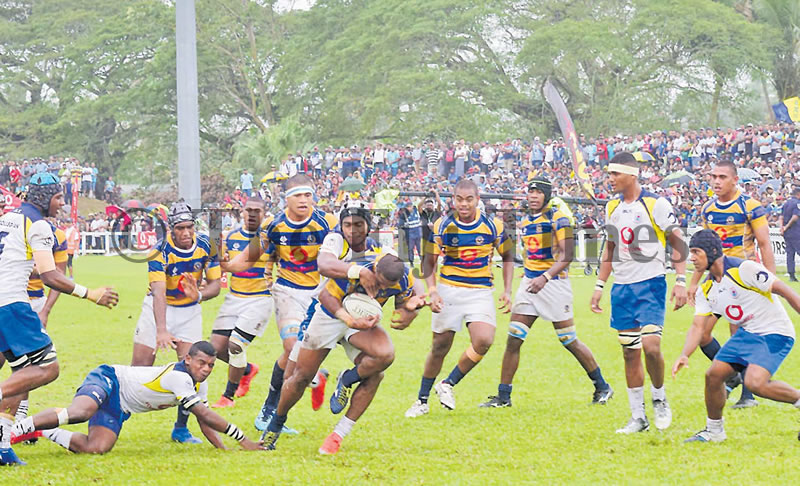 While I understand the cost of ticket prices has remained $30, I believe that Fiji Rugby Union and Fiji Secondary Schools Rugby Union should have set the price at something reasonable as parents in the Southern Division would have to fork out money for transportation to Sigatoka.

Times are hard and I guess lovers of the Deans Trophy competition would have to dig deep to make it to Sigatoka.

Furthermore, I’m glad that yesterday’s The Fiji Times editorial mentioned that “we should be identifying our next core group of front rowers, second rowers, back rowers, halfbacks, fly halves, centres, wingers and fullbacks from this competition and that we should be identifying potential talents, and bridging the gap between the Deans Trophy competition and the Flying Fijians”.

To those travelling to the West, please travel safely and enjoy action at the Deans!

On the other hand, my best wishes to all those schools that are taking part in the Fiji Secondary Schools soccer IDC which starts in Ba today!

Government may be cutting costs and I can believe it.

I had a giggle because a few months ago people were lining up for money being handed out at Shirley Park and other places around Fiji.

It was well before that time when we tick.

So all that money is gone?

How about setting up caravans in the danger zones?

I’m sure there are well-meaning people who can give a few caravans for the sake of security.

The core of the letter encompassed the justifying reasons for the fee increase in certificates from the Registrar of Births, Deaths and Marriages.

As stated by the writer, the different related costs are the reason for the increase so people had to accept it because “nothing is free”.

In the same letter, the writer mentioned “free education initiative”.

Mate Tukai, I think you would agree with me that costs are involved in education as well.

How would you explain the education initiative as “free”?

We would like to respond to a letter published in The Fiji Times titled, “EFL’s prepay system” on Tuesday, August 6, 2019.

Please find clarifications and merits of the EFL prepay system.

1. EFL has always kept its customers abreast of developments in the energy sector and of new initiatives as they are made available.

Respective Turaganikoro for villages and advisory councillors for communities and settlements along these areas were contacted to arrange meetings with customers before the EFL teams carried out awareness on the change from post-pay to prepay meters.

Letters were sent to affected customers together with the Vodafone M-Paisa and Digicel Mobile Money pamphlets detailing to customers the step by step guide for purchasing electricity tokens through these platforms.

These pamphlets also outline how to enter the token to the prepay meter.

Prepay customers will enjoy these services as both Vodafone M-Paisa and Digicel Mobile Money platforms are supported with a 24/7 service.

3. Through this online vending system, customers can better manage their electricity usage and will not be disconnected for overdue accounts hence, there will not be any reconnection fee.

They will not be levied with a minimum charge/fee when the meter is not in use and no consumer security (refundable) deposit is required.

4. Once the post-pay meters are converted to prepay, a final bill will be generated and sent to customers after the consumer security deposit is utilised to offset the last consumption bill.

This final bill will also display a refundable or a payable amount.

In the instance a refundable amount is displayed in the EFL invoice, the account holder is required to visit the EFL customer care office with a valid ID in order to claim their consumer security deposit refund.

With the prepay top-up available 24/7, customers have the ability to top up in any circumstance they may be in, as there will be support from other members of the family or neighbours to assist.

They also can plan and ensure the top-ups are carried out during the day and with the customers convenience to ensure electricity is available when needed.

We hope the above clarifies and will help in understanding the benefits of the EFL prepay system.

Should there be any further enquiries, EFL prepay customers can call us on 132333 from a landline, mobile users 5333 or email customer.services@efl.com.fj

If a pothole task force is set up, can I volunteer to be part of the team?

I can count them, but will they be categorised in the various sizes?

I can come up with names to describe them.

I thought that had effectively ended after the first coup.

I believe since then one is seen as being for the mob in power or against them.

I believe if one is for he or she is in, if not one’s out!

Now, I believe one of the Minister for Defence’s famous quotes when asked on safety on the streets in Suva is “focus on the use of technology, recruitment and smart policing”.

Well, a lot of buturaki is still going around in the heart of Suva.

As the FTUC’s application to march is again refused, I’m reminded of what a former soldier used to wear on his flak jacket in Lebanon.

Once again, I say isa!

That a tourism worker was called a monkey by a tourist is regrettable.

However, if tourists knew what some street touts called them when they decline to enter relevant shops, I am sure the tourists would never visit Fiji again, or recommend others to do so.

How come The Fiji Times “eyewitness” (7/8) noticed that “the railing along Edinburgh Drive in Suva needs to be fixed” and not the relevant authority?

Who is responsible and why wait for The Fiji Times to point that out?

The “eyewitness” in The Fiji Times much appreciated contribution to the public good.

I believe Fiji has a national health adviser.

Despite this, our nation struggles with multiple health issues.

Although the Flying Fijians v Samoa clash will have no bearing on who walks away with the Pacific Nations Cup, it is expected to ignite an ancient rivalry that has produced many spectacular battles.

Seeing “The Bus” riding a kickbike during the Flying Fijians training session shows that our boys will not take the opposition lightly.

Samoan coach Steve Johnson will name a strong squad to play Fiji and this will be a good testing ground for our boys as it will be a good buildup for next month’s RWC.

Flying Fijians coach John McKee will have another opportunity to gauge his players’ performance before he names his final squad and I wish him all the best.

While focus will be on the Deans finals, I’m sure that fans will turn out in numbers to support our boys as we see them play in Suva for the last time before the RWC!

I agree that the expected pullout of Korean Airlines from the Nadi- Seoul route is a business and management decision on their part.

There is no argument with that.

I understand from the response in Parliament on Wednesday (7/8) that our Government also recognises this.

I am not privy to the history behind the introduction of the route or whether it will be re-introduced in the future when economic conditions become more favourable for the airline.

However, in my humble opinion our Government may deem it appropriate, at the diplomatic level, to at least formally convey its disappointment with the pullout, through a third person note and tabletop bilateral discussions.

I believe the route has been very popular with those flying to and from UK and Europe, especially the free overnight in Seoul on the northbound flight!

Maybe it’s time for Fiji Airways to seriously look at filling in the gap left by Korean Airlines’ departure and look at the level of air freedom rights it should seek to obtain, based of course on commercial viability and acceptability.

In the meantime, the introduction of the code-sharing Air India flights soon would be very welcomed, in terms of direct access to the Indian subcontinent.