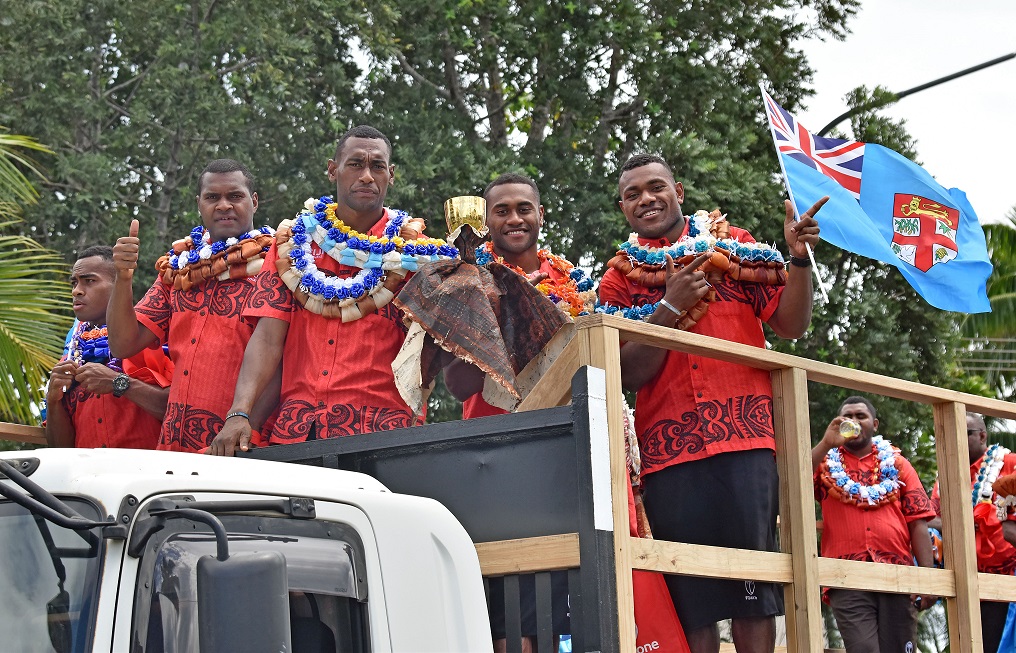 It’s a pity that I and the many like me, who had to report to work, missed the RWC 7s win celebration that was held on Friday.

However, luck was with those who made it, but the empty seats at the HFC Bank Stadium painted a different picture.

I remember the seats and embankment was jam-packed when Fiji brought home our first Olympic Games title in 2016.

I enjoyed the photos posted on social media, although I was slightly envious that they were posted by the lucky ones.

The Fiji Times (17/09) front page will go into the archives and the special “lift-out”‘, which was compiled with a lot of interest and enthusiasm, was a beauty.

The many colourful photos and special stories touched hearts as the essence of the RWC 7s win, after a record 17 years, was reflected.

I thank the players, their families and officials and I’m thankful to the Government for the $10k reward!

The icing on the celebration cake was sweet as the Fijiana earned a historic victory over the NZ Wahine Maori side 32-10.

The Fijiana was good and so was the support.

We are what we eat

As raised by a writer in The Fiji Times (FT16/9), we are basically what we eat, a concern for all of us in this global food crisis when we all struggle to put healthy food on the table.

Normally we eat what we can afford in accordance with our needs and wants to survive.

But most of the time we are unable to have balanced meals as we continue to fight inflation.

What we eat today walks and talks tomorrow.

When diet is wrong, medicine is of no use.

When diet is correct, medicine is of no need.

After they renewed my bank card through the post box, I was told the account was closed.

Why send a new card to a closed account?

Jan Nissar of NSW says: “The economy of any country does not depend on the quality of government.

So what is the point in having a government?

Why have a government?

What is the role of government if it’s up to the people to get the country going in the right direction?

What a perverse assertion by Mr Nissar?

With the 2022 national election is just around the corner, will there be ever a party leaders election debate on what they have to offer to us Fijians?

As voters we need to hear from the horse’s mouth so we can choose our votes wisely?

I have been reliably informed that the famous pipeline urgently needs to be jump-started.

Although our proud Fijiana 7s rugby team did not manage a podium finish in the RWC7s in Cape Town, South Africa last weekend, their effort was very commendable and praiseworthy.

Four years ago they had a 11th place finish.

This time they improved admirably with a 5th place finish.

Their best is yet to come.

They will get better.

Can they be offered a token appreciation of a thousand dollar bonus each please?

It would be a good incentive going forward, in my view.

Tarun Tikaram asserts some people would “not have seen the Parliament” had it not been for the 2013 Constitution (FT 17/9).

Some people would not have seen the Parliament had it not been for the 2006 military coup.

Has that crossed Mr TT’s mind?

Down memory lane on September 17, 2018, The Fiji Times editor-in-chief Fred Wesley was rewarded with a regional media award Wesley won the news Media Executive of the Year at the prestigious Asia-Pacific News Media Awards.

I was delighted it went to The Fiji Times editor-in-chief because as the editor-in-chief of the trusted brand he continues to strive to produce a newspaper that is fair, balanced and constructive, and corrects mistakes that are made.

As Wesley celebrated his achievement in 2018, the people’s newspaper was ready to celebrate its 150th birthday in 2019 at GPH in a grand way.

From time to time we read and hear from our citizens whether we have true democracy and free media in Fiji.

According to so many organisations, NGOs and prominent individuals there is no freedom to express your views freely.

The media hesitates to publish our articles, may be due to fear of being prosecuted.

I can recall few of my letters were not published in The Fiji Times, but I do not have any complain since it is the newspaper’s prerogative.

In Saturday’s The Fiji Times (17/09), there is a beautiful article written by Elena Vacukula on this topic.

Makes a lot of sense and I believe this is a true situation in our country.

Almost similar views are expressed by the Citizens’ Constitutional Forum CEO, Louchrisha Hussain, in Fiji Village where she clearly says that media freedom is under threat.

She further adds that an important aspect of true democracy is free, independent, pluralistic media that keeps public informed on matters of national public interest.

I totally agree with the views of both writers.

Standing by his son

Regardless of our PM’s political job, his main one is being a father, first and foremost.

It is admirable that he is seen today standing by his son now: whatever his son’s charges are, his dad is right to be there for him.

Thank you for this.

All of us who have adult children and have walked through difficult trials with them, do not need condemnation for this.

Unless you have walked in these shoes, please don’t throw any stones!

Or worse, use it for petty political ammunition.

That is indeed cowardly.

This is a quality to be admired in our PM, not condemned, regardless of election time or not.

Sooner a PM who proves he’s a solid father, than one who wasn’t there for his son – through any kind of difficulties.

This shows us all strength of character in the face of potential ridicule, name calling.

Thank you PM for showing the nation what a solid, decent father can look like.

This is to be respected, not condemned.

In other words, they virtually, control everything, that is humanly possible.

Most probably what they call Deep State.

That’s mind-blowing really, is there such a controlling entity?

Do we really know what is fake or what is reality?

We just have to carefully discern, these things for ourselves, on what we see in this turbulent world, as to the real distribution of power and wealth.