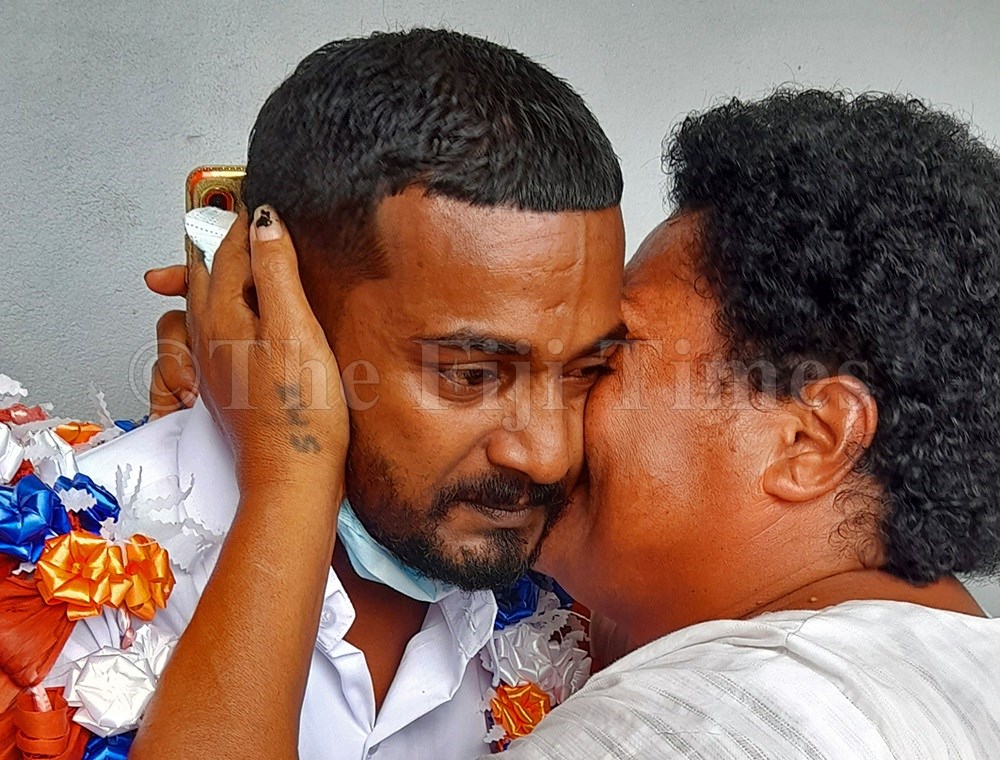 Filimone Masarau, who was switched at birth in Labasa Hospital more than 20 years ago, hugs his mother Sofi a Maleti after his wedding outside the Catholic Church in Labasa. Picture: SERAFINA SILAITOGA

I shed a happy tear for Filimone Masarau when I read his story. I can imagine the tough life he must have gone through growing up. Words cannot express what he and the other child went through. Especially the mothers. The parents would have gone through so much trauma. But the love of a mother is unconditional for both families. May God bless both families and I wish Filimone all the best. Nothing else can be said. Allen Lockington Kava Place, Lautoka

I recall Rabuka had dogmatically maintained, after his rise to power through the first military coup of 1987, that there was no poverty in Fiji and that no one was starving in the country because of subsistence affluence. I pointed out in a DDC meeting at that time that as social welfare officer who worked with the poor, poverty was a very real phenomenon for many in our midst. Now Rabuka says in his opinion piece that “a large part of the population” (“maybe 50 per cent”) is “hurting” on account of poverty which has been exacerbated by climate change impacts (FT 20/11). Rabuka has obviously educated himself about some issues about which he was arrogantly clueless when he came to power via the coup, a not uncommon problem with military generals who install themselves in power that way. It’s to Rabuka’s credit that he has educated himself out of his ignorance on matters of national importance. Rajend Naidu Sydney, Australia

I think all primary schoolteachers during the 60s were all certificate holders and to teach in a secondary school a degree was required. In secondary schools, the subjects like math and physics are a bit more complex. English was taught almost the same in primary and secondary schools. Well during my time there was very little distraction like the mobile phones we got now. There was only one problem during my time and that was teachers who created a lot of fear. Once you get frightened of a teacher your learning becomes harder. As for my teachers, certificate and degree holders were good because I never had to study at home to pass exams. Sukha Singh Labasa

A lot has been said about the performance of the Flying Fijians rugby team against Wales and blame has been attributed to a lot of factors including the referee. I believe that it boils down to one factor which is the team which makes the least number of mistakes wins. Dropped passes, missed tackles, aimless kicking and wrong options are only some of the common errors and if Fiji made an effort to minimise these, then we stand a good chance of improving our performance. Just saying. Emosi Balei Suva

How is this for modern day service? A very good taxi driving friend shared with me his first-hand test of patience, and experience, getting his annual renewal of taxi fitness. It took all of almost six hours last from first screening to queue ….. 9am to about 3pm to get taxi fitness done last week. Are antiquated systems being used? Or has work complacency now taken a strong foothold? Talk about monopolistic bureaucratic systems and procedures. Can they be modernised? Online systems, where possible? Appointments? Or something similar to speed up the process? Current systems can and should be reviewed, upgraded and implemented, forthwith, in my humble view. Isn’t it strange the taxi unions aren’t standing up to protect their service providers. My two cents view, offered respectfully, and free of charge, to help the Nadi taxi industry. I do care for the silent and voiceless majority, as your fellow kai Nadi. No one should be made to hang around for six long unproductive hours just to get annual taxi renewal done. This is just crazy, in my honest opinion. Please smarten up guys. We are no longer in the old colonial era Fiji. Ronnie Chang Martintar, Nadi

After the first Test against New Zealand and the Test against Wales was not televised live on free-to-air television, there was much disappointment among Fijian rugby fans. I wonder if these disappointing experiences would continue next year when the Drua start their Super Rugby campaign. MOHAMMED IMRAZ JANIF Natabua, Lautoka

I BELIEVE the reports and stats of home burglaries and robberies must have dropped since the curfew hours were imposed. Good intentions! AREKI DAWAI Suva

I RECALL a group of ladies were taken to India for training on installation and maintenance of solar power at homes. Any idea how they have progressed within the community they live? DAN URAI Lautoka

MANY people in large indoor gatherings and workplaces are no longer wearing masks while we can see the full show of masks in open public areas. Almost two years of COVID- 19 and we are still struggling with ranking the risk areas. KIRAN KHATRI Samabula, Suva

I BELIEVE some international borders are opening and tourists are moving in. As a citizen of the country, we should be more welcoming than before to our new visitors and act more politely after a long lockdown, during this pandemic. Let us try to be more helpful to our new visitors. This is a new start for all of us and a lot of things will change from old to a new beginning. KELEPI DAKUIYACO Waikalou, Serua

AS part of the right sizing exercise currently being undertaken by Fiji Revenue and Customs Service aimed at improving efficiency and streamlining its operations the staff members were offered a voluntary redundancy package (FT 30/10). The severance package includes one week’s pay for each completed year of service and an ex-gratia payment of $4000. Acting CEO has now confirmed that 102 staff will be terminated on December 20 (FT 20/11). This is in addition to the staff members whose contracts have not been renewed. According to the general secretary of FPSA Rajeshwar Singh there was no consultation with the union on this issue and as such it was in breach of the master collective agreement and the Employment Relations Act (ERA) 2007. In my view digitilisation or automation of some of the processes does not necessarily mean retrenchment of employees. The Customs arm of the FRCS has a much wider role to play besides revenue collection such as border security and post compliance audit. I am sure some of these staff members can be redeployed to strengthen these crucial areas. Redundancy should be the last resort for the future of the staff members and their families are at stake here as most of them are sole breadwinners. Right now they are going through a lot of anxiety and emotional stress. Therefore, it is imperative for the redundancy package to provide a fair deal to the staff members for it has a significant impact not only on their livelihood, but also on the welfare of their dependents as well. The Minister for Economy while explaining the rationale behind no salary cuts for public servants said: “We also view that a lot of civil servants actually provide a particular family assistance to those family members who actually may have become unemployed from the private sector.” (FT 2/3). I wonder why the same consideration cannot be applied to these group of workers most of who may be in a similar situation. At least they deserve to be accorded some empathy for their long service and contribution. Some of them have mortgages and loans to pay and it could take them years to find another employment given the scarcity of job opportunities post pandemic. Therefore, a more decent package should be considered to provide them ample compensation to meet their survival needs and other financial commitment until they are able to acquire another stable job. SELWA NANDAN Lautoka

In most cases the piece of paper described as a “qualification for teaching” has very little to do with what happens in the classroom of a successful teacher. Educators depend for their success on their ability to establish close relationships with their students, and not on their ability to write exams for degrees. Where do we find degree courses based on competency in the classroom, with reports from students and parents as “evidence-based” proof of competency? Fergus Garrett Vatuwaqa, Suva

I believe we had earlier said that “herd immunity” for this particular viral infection was around 80 per cent. If we are now progressing towards booster shots for the “vulnerable” in our community, are we now saying that we will not achieve “herd immunity” in our population? I would assume that the “vulnerable” here, probably includes those with pre-existing medical conditions, despite being fully vaccinated. We have now at last achieved fully vaccinating 90 per cent of our target population. Therein lies the rub, as they say. It’s not 90 per cent of our total population, but of our target population — which is much less than our total population. What does this all now mean for the remaining persons in our community
(200,000?) — those below 12 years of age, those unvaccinated and so on? Is the booster shot indirectly aimed at trying to get to “herd immunity”, so as to “save” the rest of the population? Will the booster shots be given regularly henceforth? If so, will we ever reach “herd immunity” — for the sake of the remaining unvaccinated people? EDWARD BLAKELOCK Admiral Circle, Pacific Harbour

I WISH to take this opportunity to thank government, the Ministry of Health and Medical Services, our Attorney-General, and our Prime Minister, for approving and initiating the Kidney Dialysis Program that’ll literally save many lives. It has been a long time coming and after many lives have been lost but the timing couldn’t be better for those of us currently living on the edge of life and death. I personally will benefit greatly from the program and will now only pay $50 per dialysis session instead of $220 that I’ve been paying three times a week over the past 14 months at the private clinic I attend. It’s a huge saving and a great relief to many families who’ve struggled to provide the finances to keep loved ones alive. Most importantly, this subsidy program will allow many to get the required three dialysis treatments per week which, due to the high costs, many had no choice but to have just two or even one treatment a week, a risky affair that many took and which eventually took its toll. This subsidy program has made a great difference to everyone involved. For one to be able to access this subsidy program one must apply through the Ministry of Health and Medical Services and one must meet certain conditions in order to be eligible for the subsidy. An approval card similar to an ID card will be issued and is valid for a year. Indeed a lifesaving initiative that’ll literally save many lives! SIMON JC HAZELMAN Rava Estate, Savusavu

DO you think Casper will dare to come out at midnight to meet the virus or stay away out of fear? MOHAMMED IMRAZ JANIF Natabua, Lautoka

FIJI commits to greener health system’ (FT 20/11). Once that health system is in place ‘Lost limbs: Amputation worry among iTaukei men’ (FT 19/11) will become a thing of the past no doubt. RAJEND NAIDU Sydney, Australia

I BELIEVE lowering the retirement age to 55 has contributed to skills gap at workplaces. Appropriate time for the Minister for Education to work towards addressing this issue. DAN URAI Lautoka

THANK you, Jan, for saying that I may be a good person. Yes, your letters are good, they make the letters column more interesting. SUKHA SINGH
Labasa