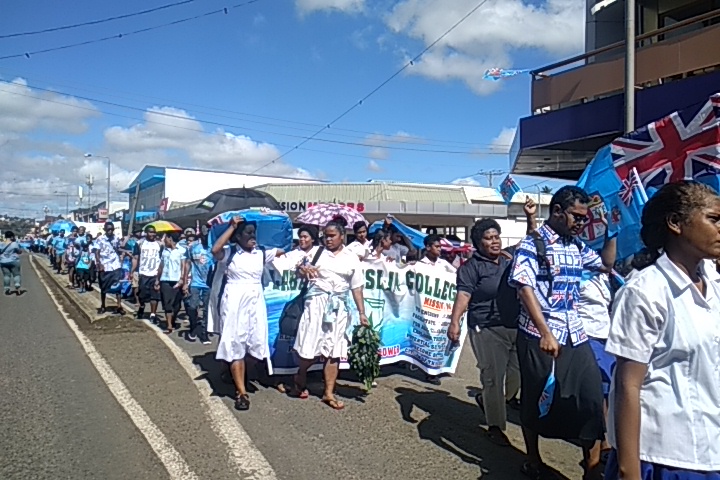 I WAS surprised to discover that India was the country with the most public holidays (21).

I believe that having many such days is a great way to fight climate change.

Public holidays also bring people together so that they can share what really matters in life.

In one of your recent edition, you asked citizens of this country what the Fiji Day meant to them.

One lady of Indian descent said that it was “the day we forget about the past”.

Considering the growing number of things we would prefer to forget lately (like that alleged incident outside the Parliament), would it be possible to celebrate Fiji Day every 10th day of every single month?

That would bring our number of public holidays on par with the world leader.

TWO former prime ministers (Rabuka and Chaudhry) and current leader of the NFP (Biman) condemned Attorney-General Aiyaz Sayed-Khaiyum’s claim that past elected leaders of the municipal councils were intellectually deficient (‘A-G has no monopoly on intellect’ FT 02/11).

But I believe that clearly does not stop some people from trying to do that in the mistaken belief that they are the repository of all things intellectual.

IT’S amusing to see how the recent rape saga involving a renowned rugby player has had the nation torn in two.

Even more disappointing to see some esteemed members of society making scornful spiteful remarks on social media forums, stating (without any factual statistics, might I add) that “most of the women supporting the victim come from failed marriages and have brought their anti-men bitterness into a national level”.

We can all debate the merits of this case, but I believe one thing that seems to be as clear as day is that for some of us — being a national hero trumps decency.

I’M having a mix here in Kava Place and after the first bowl I asked myself — “When did race become politically incorrect?”

When did the mention of someone’s ethnicity become an issue?

I wonder if people didn’t care in the past?

Anyway I was just wondering.

And why have people become so sensitive about little issues.

Then I said ‘eu!’ and drank another bowl.

WHILE moving around in Yasawa St, Lautoka, I saw a certain taxi base is partly occupied by juice sellers.

Can LCC enforcement officials look into this?

Also the juice sellers blocked half of the walkway.

IT is really sad to hear that the MOE has made a strict ruling that a child born after July 1, 2014, should not be enrolled in Year One class in any school.

This decision was made recently and this made the child and the parents frustrated.

I believe the MOE had the flexible rule that allowed the underage child to be enrolled and was gazetted previously.

I believe the head of the school is to request MOE to enrol the child as there is enough room in the class and he/she is fit for intake.

One of the schools had added an extra Year One classroom and underage children from that school be given first priority and then children from other schools should be enrolled.

The parents were sure that their children would be enrolled as they were taken in the kindergarten in the first place.

Not only that, they are ready to see their children graduate at the end of this term as they bought their graduation uniform.

The head of the school should also consult their kindergarten teachers for the progress, performance and conduct of the underage children before requesting the MOE for their intake.

Definitely the decision made by the MOE at this time of the year is not only frustrating but also heartbreaking.

I sincerely request MOE to enrol them in Year One next year and make a firm ruling at the beginning of the year for the next lot so parents will not send their underage children to kindergarten.

It will become boring and disheartening for the young and innocent kids to repeat.