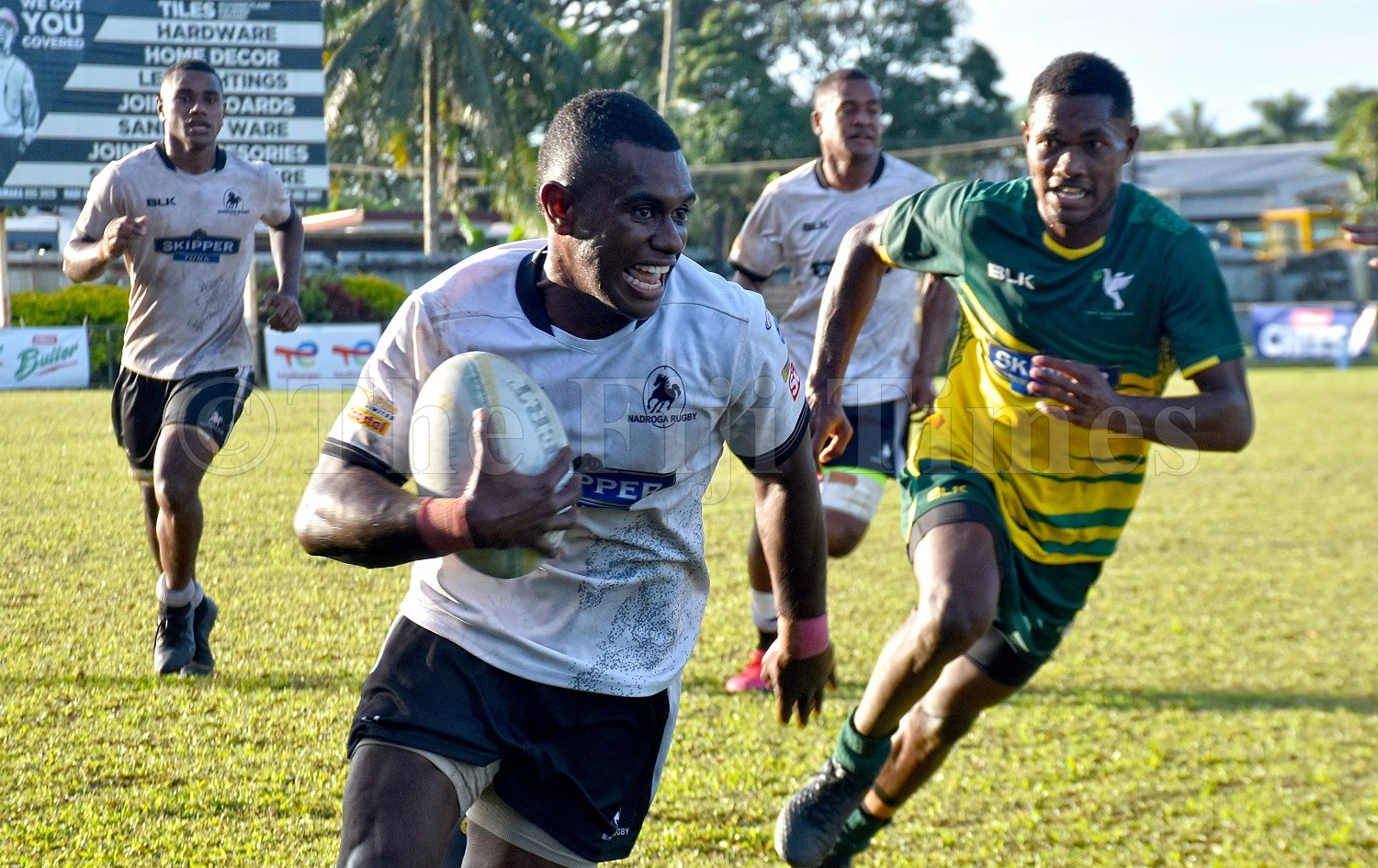 What a game of rugby witnessed by fans at Lawaqa Park! It had all the elements of the tough game and a perfect build-up to the Super Rugby Pacific final last night between the Blues and Crusaders at Eden Park. After losing to Naitasiri 29-27 at Naluwai Park in round one, the Stallions entered a much polished, determined and well-oiled engine and they braved the Naitasiri onslaught late into the game to deny the Highlanders a bonus point-loss. The Stallions, playing in front of their home fans, recorded a bonus-point win to keep alive their chances of hosting a semi-final. Nadroga will battle Nadi next weekend at Prince Charles for the Inkk Farebrother Sullivan Trophy. The Stallions lost to Nadi 16-15 in round one and they have been presented the golden opportunity to bring back the prestigious title which they once had in their trophy cabinet which is currently empty. Congratulations Nadroga! I’m a proud fan! Hakwa Nadro! Rajnesh Ishwar Lingam Nadawa, Nasinu

I wish to thank Ajai Kumar of Nadi for his letter in yesterday’s The Fiji Times (18/06). The way these two super powers, America and China are trying to influence their presence in certain areas of the world is not hidden from anyone. In their struggle for superiority, I believe the beneficiaries are the small nations. So let them continue. The second part of Ajai’s letter touches on a previous letter written by one Ravind C Naidu about global hegemony. This made me to go back to read Mr Naidu’s letter. I am convinced that Ravind Naidu must have been a brilliant scholar of English and a top achiever in this field. As a retired teacher and with my advanced age, I read this letter twice and admit it was beyond me to get the right message. I could only guess what the writer meant. Thanks Ajai for listing some of these words separately in your letter. Personally I enjoy reading stories or articles that I can understand and follow. Anyway there is no intention to criticise or condemn anyone, but am trying to express my personal opinion. VIJAY MAHARAJ Sydney, Australia

The old man was so elated, that he could now travel by bus, more than he was recently able. Only since the month of May, he was granted more fare concessions, to enable him to pay, for more bus travel in our nation. The bus fare allowance had now increased, from $10 to $25 per month and it was now distributed, in a three – monthly tranche. He is ever so grateful, for given small mercies. It’s ever so wonderful, that he could now often visit his daughters. Edward Blakelock Admiral Circle, Pacific Harbour

The Fiji Times editorial comments on the education sector (FT 17/6) should be valued by all of us to value quality education. The Fiji Prime Minister Voreqe Bainimarama has expressed his concern for the importance of education for the growing children and their families, on the opening of new facilities at Sigatoka Methodist College. The children should be well prepared to face many challenges in life as they pass through several different stages. They should be given all the opportunities to prepare well for self-dependencies. The importance of parents’ involvement in education to understand their child’s needs remains paramount. Working in partnership with schools and the communities at all levels is ever-rewarding. We often hear “education is the key to success”. How true! However, we should also be mindful that the “masterkey” is in the hands of the parents. “Every child should have an opportunity to receive quality education” – Bill Frist. Tahir Ali Hamilton, New Zealand

Navneet Ram on planting vegetables (FT 17/6) should encourage those who have limited spaces in the back or front yard to plant vegetables by creating gardens. This could be done by using containers or boxes filled with soil, utilising whatever land is available. This is the way to be self-sufficient producing fresh vegetables to put forward on the table. A politician once said “build bridges on rivers, but if there is no river, create one and then build”. Similarly, if there is no garden, create one and then plant. Let’s go for our homegrown fresh food for our wellbeing. Go-green! Tahir Ali Hamilton, New Zealand

What actually happens at the sugar mills when the crushing season is closed? Mohammed Imraz Janif Natabua, Lautoka

MR Prime Minister thank you for telling hypocrites to stop quoting and using the scriptures from the sacred book to furnish and cast light upon their concerns. AREKI DAWAI Suva

Why should we vote for you was the main question posed to The People’s Alliance party (PA) leader, Sitiveni Rabuka as he met with people in Laselase, Nadroga. Rabuka’s response was they have the answer as people know they want a change. A rather vague meaningless and abstruse answer from a party leader I must say. Can Rabuka be more specific in detailing what changes he will make from what the current FijiFirst Government has produced? How will he make things better from what it currently is, especially in this time of global uncertainty and economic struggles? I believe the only change Rabuka, his candidate lineup, and his followers want is power, nothing else. Power to rule and get what they want. Believe me if PA wins the 2022 election, we will find that after their four years spell nothing will have changed and everything will simply be status-quo. Let’s not kid ourselves! Simon JC Hazelman Rava Estate, Savusavu

THANK you Tarun Tikaram for your response to my earlier letter (FT 15/06). Once again I find you off the mark and trying to mislead our readers. Branding me as one of the “deserters” of the country of our birth is not correct either. During the period of the past 10 to 15 years the number of letters I have written from Fiji in The Fiji Times is more than written from anywhere else. In my service to the nation as a civil servant for over 32 years, whatever I earned was reinvested in Fiji and today I own a beautiful home on a freehold land. This is the only asset I have. In my previous visit to Fiji last month I made sure to upgrade my voter card from green to blue. My two sons are still in Fiji. One just retired from the medical department after serving for 40 years. Two are in Australia who look after me whenever I am here for my medical needs. I am one of the fortunate ones to get the best treatment while here. Yes, I proudly admit to be a member of the oldest political party in the country. The party that gave birth to ‘Fiji National Provident Fund’ which serves the country in so many ways today. To be a mouthpiece of any political party is your personal choice, but please be strong to face any criticism in a true democratic way. Your comment about two people leaving my party is of least concern to us. The former president Tupou Draunidalo was in Parliament on an NFP ticket. Once she left the party she paid a heavy price for it. She formed a new political party and this also had its natural death. Once she declared not to work with any coup makers, but if she decided to swallow her own words and join FF party this is her personal matter. Regards Charan Jeet Singh, he is still with the coalition. You also mentioned that I am a blind follower of Professor Biman Prasad. Personally I find nothing wrong with this since I found him most capable and a sincere leader of our party. Tarun you might remember Cyclone Winston and it’s effects on our citizens. The Parliament sessions that followed this severe cyclone, besides other issues gave hefty pay rise to all parliamentarians. NFP, and it’s three MPs were the only group that rejected any pay rise due to the sufferings of our people, mainly in the West. How conveniently some of our people forget this is just unimaginable. To avoid a lengthy letter I hope I have clarified some of your doubts Tarun and assure you that my next letter will be from my beloved country, Fiji. VIJAY MAHARAJ Sydney, Australia

On opening of the borders globally “free for all” now the onus is with each individual for our own safety, using common sense. I feel the health authorities prefer more awareness for prevention rather than Protocols pay. “The safety of the people shall be the highest law.” TAHIR ALI Hamilton, New Zealand

RIGHTLY or wrongly, intuitively, I spy through my little eyes, (now 70 and steadily inching forward), September 7, 2022, Fiji Constitution Day, could be Fiji General Election Day. Have I let the cat out of the mysterious political bag? This is the million dollar answer Fiji is craving for. Or, do I get corrected? Alternately, some day in January 2023, is my take. We wait and see. RONNIE CHANG Martintar, Nadi

THEIR request was sent up, hoping for approval, or at least something. But the answer that came back, plainly said “Stop asking! You will receive what is best for you, better than what you are wanting”. They listened quietly with the patience of Noah, indicative of people of that nation. They just had to be thankful once more, because of their own dire situation. EDWARD BLAKELOCK Admiral Circle, Pacific Harbour

RESPONDING to Minister Rosy Akbar’s attack on The Fiji Times for publishing “incorrect and out of context information” about her comments on gender violence (FT 11/6), editor-in-chief Fred Wesley said the contents of the article in question ‘Judiciary reminded of roles’ (FT 9/6) “were lifted directly from a speech she delivered”. I believe The Fiji Times and its editor. I trust their version. I think the Minister is scapegoating The Fiji Times after the director of public prosecutions Christopher Pryde criticised her comments. RAJEND NAIDU Sydney, Australia

How the mighty fall

AMID the desolate landscape of fallen great companies (there are too many to list), Jim Collins began to wonder: How do the mighty fall? Can decline be detected early and avoided? How far can a company fall before the path toward doom becomes inevitable and unshakable? How can companies reverse course? In How the Mighty Fall, Collins confronts these questions, offering leaders the well-founded hope that they can learn how to stave off decline and, if they find themselves falling, reverse their course. Collin’s research uncovered five stages of decline: Stage 1 Hubris born of success Stage 2 Undisciplined Pursuit of more Stage 3 Denial of Risk and Peril Stage 4 Grasping for Salvation Stage 5 Capitulation or Death By understanding these stages of decline, leaders can substantially reduce their chances of falling all the way to the bottom Great companies can stumble, badly, and recover. Every institution — a premium retailer or a political party — no matter how great, is vulnerable to decline. There is no law of nature that the most powerful will inevitably remain at the top. Anyone can fall and most eventually do. History is replete with examples. But, as Collins’ research emphasizes, some companies do indeed recover — in some cases coming back even stronger — even after having crashed — into the depths of stage 4. Decline, it turns out, is largely self-inflicted, and the path to recovery lies largely within our own hands. We are not imprisoned by our circumstances, our history, or even our staggering defeats along the way. As long as we never get entirely knocked out of the game, hope always remains.The mighty can fall, but they can  often rise again. This book is required reading for any sensible CEO, along with another classic by Jim Collins, From Good to Great. ARVIND MANI Nadi