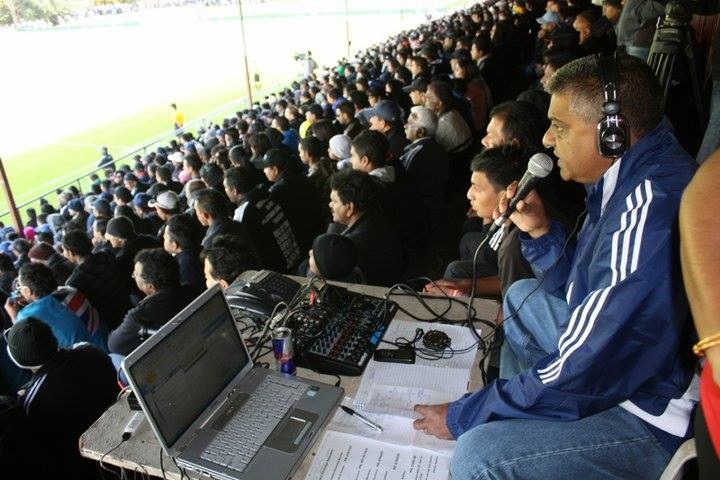 Our writer says he’s used to listening to Raymond ‘The Great’ Stoddart’s commentary and he reckons he is the best in the business. Picture: RAYMOND STODDART/FB PAGE

I’m used to listening to Raymond ‘The Great’ Stoddart’s commentary and I reckon he is the best in the business. He has been in the commentary booth for three decades and he delivers his commentary in style. His slangs and style will live in years to come. On the other hand, hats off to ABC International Development for the WINS (Women In News and Sports) initiative that has allowed a group of Pacific women, including top ref Finau Vulivuli, to commentate during the OFC Women’s Nations Cup. The WINS project has come at a time when women are excelling in sports and the training will help to produce female commentators who can compete at the highest level. Over the past six months, the group has received online mentoring and training from Peter Longman who will work with this group to strengthen their live commentary skills and knowledge. Exciting times as our women commentators brace for live commentaries which for years have been dominated by the likes of Graham Eden, Satish Narain and Raymond Stoddart. I commend ABC International Development for the WINS initiative and I wish Finau Vulivuli and her team all the best! Finau has done exceptionally well in her live commentaries! Rajnesh Ishwar Lingam Nadawa, Nasinu

The roof needs to be repainted,and the doors and windows mended. Some of the pine posts needs changing and the whole compound needs re-fencing. The place really needs to be totally renovated, if they want to fix everything in it. But it really won’t be that cheap, because all prices and costs have gone up heaps. They may need to rethink their options, on how to proceed with the renovations. First, they have to sit and have a cup of tea, so that they can think things through carefully. The works may have to be phased into next year, if they wished to renovate the whole house, that’s for sure. Edward Blakelock Admiral Circle, Pacific Harbour

I am baffled over how the amendments to the Pharmacy Profession Act to allow a pharmacist to own and operate up to five pharmacies will address anti-competition. SELWA NANDAN Lautoka

The boy was running late again, he had to get to the job-site before eight. What will his boss now say, as it’s always like this every Monday. He must learn to be more disciplined, and really more timely and consistent, if he wants to retain his employment, at least until after Christmas. Edward Blakelock Admiral Circle, Pacific Harbour

We read in ‘MIDA not draconian, says A-G’ (FT 30/7) that according to the A-G Aiyaz Sayed-Khaiyum the proof of that is that “not a single journalist” and “not a single media organisation has been prosecuted under MIDA”. Another explanation for that could be because journalists and media organisations in post coup Fiji know MIDA is like the sword of Democles hanging over them. Wonder if that possibility has crossed the A-G’s mind? Rajend Naidu Sydney, Australia

I refer to the letter “budget rejection” (FT 28/07). The role of opposition is to oppose and they are just doing their job just incase the writer is not aware of the role of opposition. No budget has ever been as such that could keep everyone happy. As a result, the areas that have not been quite glamorous and have an ability of impacting the lifestyle of our struggling people, the opposition highlights what has to come to attention. Furthermore the writer goes on to say “how can the budget be all bad” if only he could let us know “how can it be all good”. He also states “if you cannot see the good in it, then you should not sit in the parliament”. In such a case can he explain what he expects from the opposition? Thanks to the opposition, a lot is coming to the limelight and many people’s opinions and ideas are being shared by them. Isn’t it something that the Government should do which is to listen, consult and give an outcome in accordance. Can the writer also tell us how many debates were ruled out from the opposition side. Some people do not believe in the “my way or high way” process. Some of us live in the real struggling world where the opposition has been appointed to do what the government is not doing. Kirti Patel Mohan Singh Place, Lautoka

I refer to the statement made in Parliament by Minister Jone Usamate where he said that because of high tax rates in the past people were hiding their revenue. (FT30/7). While I agree that the reduction in tax may have improved compliance to some extent but to claim that it has eliminated the black economy without any factual basis sounds rather preposterous to me. What about the recoveries made from the information provided the whistleblowers? It is also nonsensical to compare Fiji with Singapore and Mauritius given the vast difference in their economies. SELWA NANDAN Lautoka

According to Economy Minister Aiyaz Sayed-Khaiyum’s analysis of the Fiji Bureau of Statistics data the Bainimarama Government has lifted 100,000 Fijians out of poverty (FT 28/7). According to Wadan Narsey, former professor of economics at USP, the minister is making a distorted interpretation of the FBS data. He wonders whether “the minister’s statement was because elections are just around the corner and voters might want optimistic assessments of the government’s poverty alleviation policies?” (FT 30/7). Who is better qualified to give us the true facts regarding the poverty situation in the country? Rajend Naidu Sydney, Australia

In reference to Sue Cauty’s letter (FT 27/7), she supports Shamima Ali’s opinion that a woman should have full rights over her body and abortion should be legal in Fiji. I am not against the argument that a woman should have full rights over her own body. However, it needs to be made clear that the child in the womb is a separate human being and therefore has its own right to be born. The unborn child is simply like a newborn baby that is fully dependent on its mother or a caregiver for survival. An unborn child is still a human being in an early stage of development. All human beings whether in the womb or outside the womb have a right to life. We would never condone the killing of a young child for any reason. The unborn child should also be treated in the same way. The unborn child is innocent and deserves to be treated as such. Conan Hatch Nadi Airport