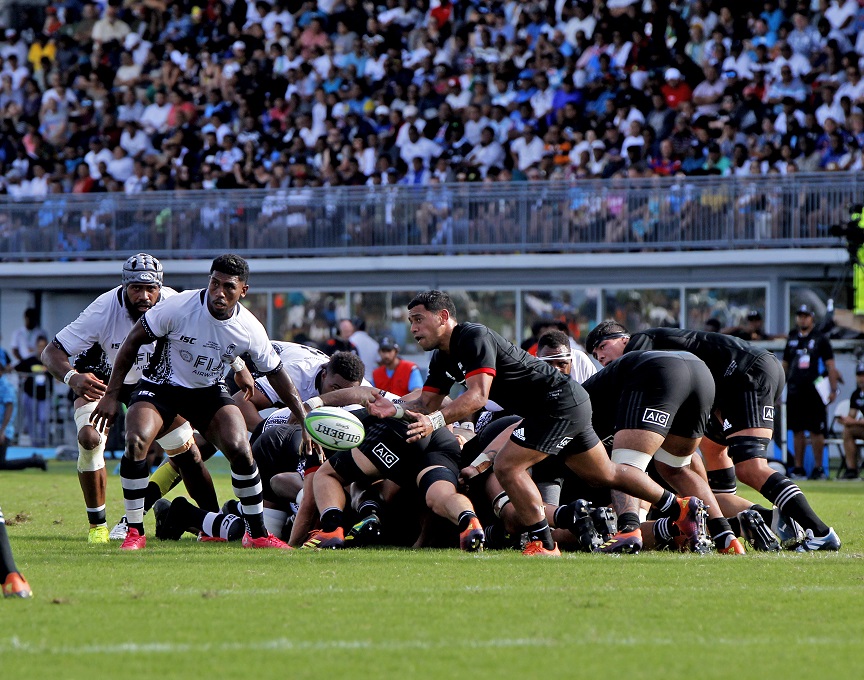 Maori All Blacks Te Toira Tahuriorangi fires out a pass against Fiji Airways Flying Fijians the at the ANZ Stadium in Suva on Saturday, July 13, 2019. Picture: JONA KONATACI/FILE

Good to watch the flamboyant style that Fiji played.

Sixty-two years and Fiji beat the Maori All Blacks again but we will take the win.

Viliame Mata take a bow, man of the match, and to all the boys — you were awesome.

It’s a boost for our Rugby World Cup campaign.

As usual, thank you to the Maori All Blacks for gracing our shores to play against our boys.

This will set the stage for the management to see what needs improvement.

I thoroughly enjoyed Fiji’s game and thank you to the TV station for bringing the game live and free to us in Kava Place.

Taki, I’ll drink to that.

WHILE excitement is high for the Fiji versus NZ Maori clash at home, our Fiji Pearls are competing in the Netball World Cup in a territory which has been home to this year’s World Cup Cricket.

Seeing the pictures via the media our girls are in high spirits and this year’s team is young and raring to bury the disappointing 11th place finish in Australia four years ago at the Allphones Arena and Netball Central.

The Pearls, however, lost to Samoa 54-51 to end on a disappointing note.

The Diamonds outclassed the Silver Ferns (58-55) to grab gold while England thrashed Jamaica (66-44) to win bronze.

In Liverpool this year the Pearls face Jamaica and South Africa and the ever-improving Trinidad and Tobago netters.

Hence, the challenge is massive and the Pearls have a mountain ahead of them but then everything is possible and I wish Vicki Wilson, Una Rauluni and the Pearls all the best!

Professor Wadan Narsey is flogging a dead horse by continuing to rebuke “A silent Fiji public” for not taking up the fight to get the ban on Prof Brij Lal and Dr Padam Narsey from entry to Fiji (the country of their birth) uplifted (FT 13/7).

The ban was imposed by the post-coup military regime which Prof Brij Lal had criticised intellectually for its departure from the norms of democratic good governance.

I believe the ban was an arbitrary exercise of State power.

The same State power that saw the imposition of a new Constitution on the people of Fiji.

That has not stopped the international community continuing business as usual with Fiji.

So why would the Fijian State act differently?

How will the “silent Fiji public” change how the Fijian State behaves?

DEAR nephew, the shock collar is not for the dog but to be worn by the dog owner.

The owner of dogs that are a nuisance, especially for Marlow St in Lautoka.

Confirmed meth and its recipient caught.

Why not name and shame?

Sweet, sweet victory 27-10 over the Maori All Blacks.

Heartiest congratulations to our very own Flying Fijians.

Please bring the next best NZ 15.

FROM the outset, electronic scooters appear to be an excellent transport mode to ease traffic woes.

There is simply no space for them to move in our current system.

Close to 500 under quarantine, confirms Ministry