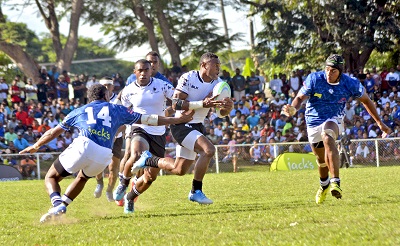 MANY or some people complain about hospital services.

Ok, fair enough, you may occasionally meet a medical staff who will or may seem rude to you.

Now may I ask, why are you in hospital? But wait, you have a right to complain about the service you get, It’s your right.

Now may I say, what percentage of people get treated badly? If there was any at all.

Then again, people who are satisfied with things, get better and go home.

They seldom broadcast the good and it goes unnoticed. It’s the negative broadcast that gets highlighted.

So, just let me give you one advice— don’t get sick.

Stop the talk — just do it.

WHY would I lie about getting investigated by FICAC on national news?

Why would I want to waste my time doing no good?

I’m sorry FICAC but you and your public relations officer, Bettylyn Matakitoga, better get her facts right and say it as it is. The said probe was conducted by FICAC Labasa and both my accountant and I have email documents to prove it.

I believe the very institution who preach transparency are not practising what they preach?

THERE are three different sets of national struggles which people go through.

The first in which the people suffer in silence such as North Korea.

The second in which the people choose to escape to other countries such as many South and Central Americans.

In the third one, the people choose to rise for a united stand such as Hong Kong.

The struggles and responses at national levels are also applicable to our personal problems.

Don’t we have any other capable and good people locally who can head statuary bodies and other organisations?

Or what’s the reason for bringing expatriates and paying them hefty paychecks in positions which were once taken up by locals?

In fact, we the taxpayers in this country are paying for these so-called good people.

It’s a big joke if we are saying we don’t have good people around who also deserve that good money.

I posted Dr McCaig’s comments on my Facebook page regarding weight issues and employment.

It drew various comments from friends.

One that took me by surprise was from someone who said that it was discrimination against fat people. Can I use the word fat, or is it wrong?

Many fat people are fitter than slim people.

In these days of being politically correct, you can say something and someone will see differently.

Remember the days when the indigenous people were called natives? Now you call someone a native the person can be offended.

What part of this century did we start all this crap, why can’t we just call a spade a spade.

IN the iTaukei community if you are a visitor to a koro that is not your own than you are a vulagi.

Vulagi to any iTaukei koro are treated with special respect and privileges.

In Fiji, we have legalised the term iTaukei to represent a particular ethnic group of people.

I believe by default therefore every other ethnic groups of people in this country are vulagi.

I rest my case.

Letters to the Editor: Wednesday December 25, 2019