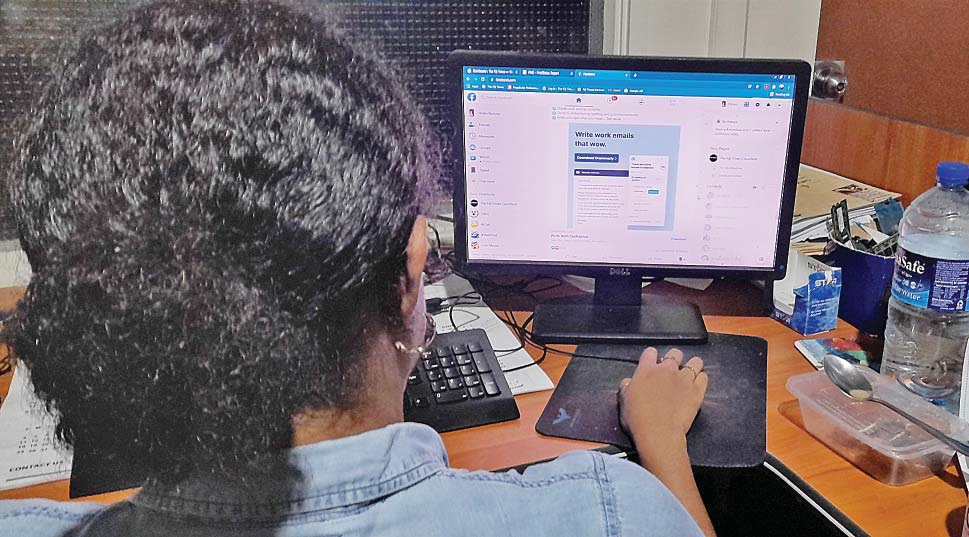 Our writer says now that schools have started, he still believes social media might still have a deep negative effect on our students. Picture: SOPHIE RALULU

Now that schools have started, I still believe social media might still have a deep negative effect on our students.

This could possibly lead to anxiety, depression, stress, isolation and boringness.

I believe this could really affect their education and their responsibilities at home.

Also, not only will it affect them but can sometimes affect their parents or guardians. Imagine the worries a parent has when his or her child is spending less or no time at all with his or her family.

AT around mid-morning yesterday, we (in Lautoka) experienced a change in the weather pattern.

In short periods, it was getting windy and rainy but not that strong and heavy respectively. Surprisingly (as if), power decided to join them.

It was like how I would describe as “going and coming”. Then again and again.

WHEN the Fiji delegation went to the COP26 meeting, they should have said the six billion dollars the delegation was asking for would be used to rebuild houses that would be blown away.

So many of us are going to stay in tents permanently if we are hit by another hurricane.

Anyway, can the FCCC explain how the price of roofing iron has gone up.

I only wish if our Minister for Economy can find out why hardware prices have jumped up so fast. SUKHA SINGH Labasa

What Old Trafford is to England, Govind Park was and still is to Fiji.

I wonder why invest in making the stands for $7 million (FIFA grant) when the pitch itself has been neglected for the past five years.

I heard the grass is about to reach the stand roofs.

The biggest question that arises here, was the money not enough? Then there is question No. 2, is the money ever enough for any project that FIFA gives grant for?

FFA has so proudly stated that their assets went up from $2.5 million to $25 million.

I think this $7 million should be subtracted from the total of $25 million.

Mr CEO and Mr president, please stop misleading people. If you cannot finish the above ground, please sell it to me.

I will do it up to international standard which in return will shut up your academy next door. SHARIF SHAH Savusavu

JAN Nissar of NSW, Australia wants to know “Who says there is no freedom of speech, freedom of expression and freedom of choice in Fiji?” (FT 8/1).

Did the late Professor Brij Lal, a true son of Fiji, have that freedom?

If he did, why was he banished from the land of his birth and had to die in exile without being able to see his family and friends in his beloved home country? RAJEND NAIDU Sydney, Australia

Credit where it’s due

It was in fact written by American composer Jester Hairston in 1956 and first recorded by Harry Belafonte, a version I personally prefer.

There have been numerous cover versions over the years, including the very popular one by the Germany-based group Boney M in 1978. PAUL GERAGHTY USP, Suva

AS children are well motivated to go back to school, the ongoing pandemic outbreak still confuses many parents when it comes to children’s health and safety.

It’s encouraging to read The Fiji Times’ editorial on “Back to school” and “Way forward” on the announcement by the Ministry of Education with consultations with the Ministry of Health, FTC, school management, WHO, and UNICEF to everyone’s benefits and assurance.

We all look forward to a healthy and safe conducive learning environment with confidence in our dedicated teachers.

I’VE experienced stress when driving on our roads.

Being late for something and the car in front of you slows you down for whatever reason.

Who knows what reason there might be for slow drivers, but I believe that there are drivers who mean to slow their cars down just to laugh at other drivers who are behind them.

THE frustrations being voiced by residents along the Suva-Nausori corridor, in my humble opinion, is understandable.

Has the Water Authority of Fiji kept in check on population growth and the ever growing demands for daily water supply in this particular area over the past 10 to 15 years?

Population explosion is exponential, is my own two cent take. I believe the Fiji Roads Authority gets $250 million to $350 million per annum.

I do however, stand corrected. WAF also needs an equally sizeable chunk of the annual national budget to address dire needs and demands, in my view. Greater, and just as important, is potable water in the extremely densely populated region of Nakasi, boasting some 100,000 people.

I rest my views, most respectfully. RONNIE CHANG Martintar, Nadi

BHARAT Morris believes the commission of inquiry into the Office of the Auditor-General could herald “many more inquiries to come” (FT 4/1). It won’t.

I believe inquiries are done very selectively by the ruling elite to protect their vested interest. Inquiries that are likely to run counter to that are out.

From Bharat’s list of possible inquiries, discerning minds will pick out the ones that are out. RAJEND NAIDU Sydney, Australia

I STARTED playing soccer some 40 years ago. Below are the list of what was on offer then.

 Our FIFA ranking was the highest ever.

 Any district with less than 10 clubs could not form district teams. Banned.

 Reserve bench on the touchline without any roof get roasted or wet.

 Refs were easily bought to put your team through.

 Protest even upon entering the finals.

 If the host is on the verge of missing the semis, the decider is fixed to see the host through.

 Nothing else but sandwich as grant was just too little from FFA.

 Players’ belongings got stolen before the finals.

 Players break camp and go on a drinking spree.

I would love to hear from the “top brass” at FFA as to what’s the difference now compared with some 40 years ago.

Where is your so-called development. Please bear in mind before you speak as I still play today.

I know the difference because I feel there is no development at all.