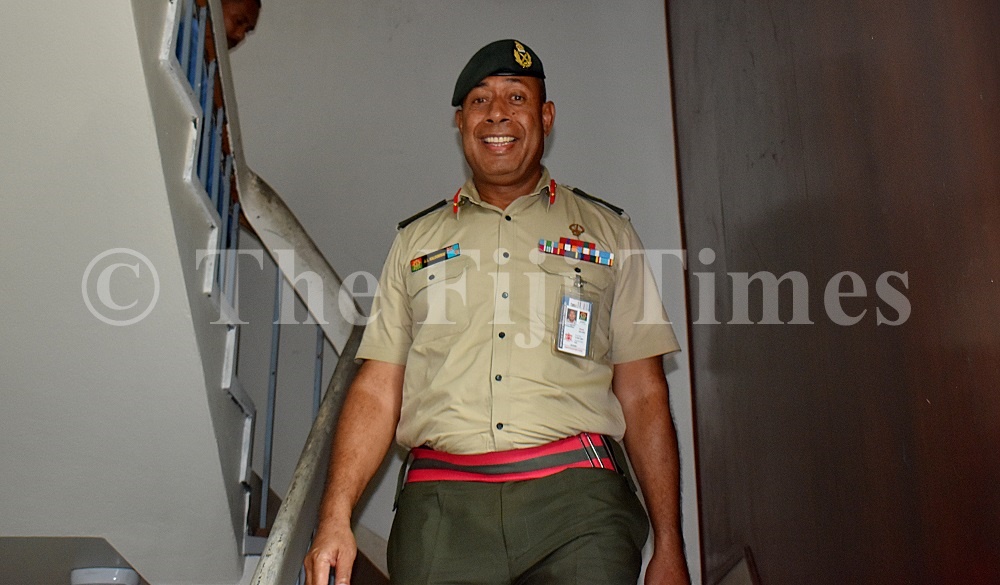 I write in response to the recent statements made by the RFMF Commander Major General Jone Kalouniwai, in which he specifically stated that “separation of powers between the executive and judicial arms of the State must be respected”.

He further stated that “the decisions and actions of the new Government are putting a risk at the nature of law and separation of powers”.

I just wish to question the much respected major general on where he was when the Fiji First government blatantly assumed powers of all the three arms of government?

Where was he when our Solicitor General was removed without following the process outlined by law?

Where was the Commander when the Constitution of our country was violated time and time again for 16 long years.

The FijiFirst accounts were barred from being audited but Major General Kalouniwai decides to draw the line when Fiji actually starts to progress and prosper under new leadership.

I believe that the recent Government decisions and actions have not been taken as negatively by the public in comparison to the statements made by the RFMF chief.

Either you work with the new government or you don’t.

Can there be free evening classes for working citizens who wish to learn the iTaukei and Hindi languages?

As these are the official languages of the country, Government must make all efforts to teach its people these languages.

This will be money well spent in the long run for unity in Fiji.

So now having the renovation of the PM’s office worth $7m for the present Prime Minister, how will the ex PM digest it?

Well, it’s one of those things.

With power, everything rises and falls.

Partnership will lead to growth

I was pleased to read that The Fiji Times signed an agreement with the Swire Shipping Fijian Drua as a media partner for the Super Rugby Pacific franchise.

I quote Fijian Drua CEO Mark Evans: “We’re very excited and very much looking forward to the season, especially having great partners on-board like The Fiji Times. This is really going to help us to promote our matches in Fiji and driving attendance. We made a real stir around the world last year as a team and a club with our two games in Fiji. And with The Fiji Times’ help, we’re sure we are going to do an even better job in 2023.”

I was impressed with the coverage given to the Drua by The Fiji Times sports reporters last year.

The in-depth reports, match build-up and player profiles, which were compiled by Filipe Marayawa, who left for NZ, last year, helped promote the Fijian Drua.

I am adamant this partnership will help the Drua grow.

In the Great Britain vs Fijiana 7s match, our girls definitely lacked speed to burn, trailing 12 – 14 at the break.

Midway through the second half Fijiana made amends to take the lead 19 – 14.

With a minute to play, we sadly copped a yellow for a no-arm tackle.

Our lucky stars were with Fijiana to claim a sweet victory 19-14.

HE has achieved, experienced, tormented and I believe it has taught Sitiveni Rabuka many great lessons.

Today many have witnessed the spirit of humanity and forgiveness in Mr Rabuka to treat Voreqe Bainimarama who loves to call him “a snake” the way he least expected.

A month to vacate the PM’s residence and a government quarters for Mr Bainimarama, respect and honour at it’s best.

We will all reach the departure lounge one day, as we part ways with our possessions and strength.

Anyway I hope Mr Rabuka and Mr Bainimarama do not forget that they are public servants and their residence is covered by the taxpayers’ coffers and nothing as such as “rent for free”!

I WAS surprised to learn from Ronnie Chang’s letter ( FT 21/1 ) that the State-owned residence which former PM Bainimarama occupied (and continues to occupy) underwent massive renovations and upgrade to almost “opulence” status.

That can’t be true because some schoolchildren are still without classrooms damaged by cyclones in the country.

And is that why Bainimarama is reluctant to leave?

We know a lot of leaders in third world banana republics live in opulent mansions while their people live in grinding poverty.

His young days as he recalls as PM gave him more confidence and wisdom to serve us all with divine guidance.

As for young NZ PM Jacinda Ardern who is resigning at this young age of 42, I feel and pray that in time to come, she will be able to take over once again as Rabuka has shown.

Politics is a dirty game when sometimes you have to shift the goalpost to win, but on the level playing field.

If you can’t win by strength, you can often win by working steadily and patiently.

The man who works and is never bored is never old.

Age is no barrier.

Drivers in Fiji should audition to be stunt drivers in the next James Bond Film.

Fijian drivers have to be aware of potholes everywhere, stray animals, oncoming traffic and pedestrians who think they can use the roads like vehicles.

Driving on Fiji’s roads is like driving in an action movie scene that involves a car chase where hazards are always around the corner.

Government; continue to govern with love as you promised even to those you perceive as your adversaries.

It has an osmotic effect.

Give this Government a chance.

You were once there and had your spoils.

You did what you felt was best in your time.

Thank you for your service.

You can fire back from the other side of the house now; after morning tea.

That was like denying the voice of the people.

I’m just wondering what might have happened if Narube or Biman had got the outright majority as civilians?

Hypothetical, for a different space.

Defence; uphold the values of that noble institution.

Do it quietly please, so you don’t scare everyone.

Live firing at the range only.

Observe and report only for now.

The people can’t continue to live in fear for ever.

You are their guardians, shield them.

Beat the retreat, call the troops home for some rest and recreation.

There is no civil war. (God knows you need a rest, especially the heroes traumatised from past events to uphold loyalty to the institution, those that lost their lives, and those that have the bullet wound scars to show they were willing to pay the ultimate sacrifice for the country — I salute you).

Don’t listen to the shadowy figures in the dark, filling your ears and minds with negativity.

Let them remain there, just shadows in the dark, and irrelevant.

They’ve brought no good to the country in the past.

The country needs it.

Fellow humans, I’m so sorry, you have lived in fear and uncertainty for so long.

You have a right to freedom, success and happiness.

It might take a bit of adjusting, but you don’t have to whisper anymore.

We can’t change everyone to be on the people’s side, but my oath, like the majority of us including this masthead and my fellow contributors voicing their opinions here and elsewhere, we should keep trying.

Take Fiji back to the way the world should be.

Slow and steady as she goes.

Since the swearing in of our new Prime Minister on the 24th of December, I’ve enjoyed listening to the interviews and speeches given by the Honourable PM.

The ability to speak freely without any notes and to share stories, jokes, quotes and poems to suit the occasion is a feat that can only be mastered by a few.

The PM has a wit about him and a sense of humour that’s a stark contrast to the speeches and words that we have been exposed to by the former PM.

In an interview with Lice Movono of ABC Australia, the PM was asked about China’s involvement in the Pacific and if Fiji will strengthen its military and police ties with China, whilst diplomatically answering no and to avoid conflict in the Pacific with China and our regional neighbours, he went on to say “it can be avoided by frank responsible dialogue”.

He paused for a few seconds and continued “that’s a frank with a small f, not a capital f”.

When Lice asked the follow-up question, you can hear the sound of muffled laughter in the background.

Ronald Reagan the US President is also known for sharing many stories and jokes during his term as president and it captured the minds and hearts of the populous.

Our honourable PM has made many speeches recently and one that has stood out for me is his speech at the Fiji Teachers Confederation celebration.

Without any notes he articulated himself masterfully, speaking from the heart, uplifting the lives of everyone watching and listening.

No matter your background or occupation you will come out of that speech with your spirit soaring and heart content.

I hope that your words will inspire other leaders and young people to speak from the heart, to speak with conviction and speak life unto others.

Now that you have caught the white rabbit, as a prime minister with a past, a sinner with a future, as you put your hand in the hand of God may He light your path and keep you safe in the paths unknown.