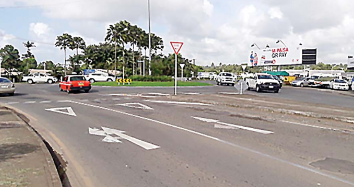 Road markings near the Bailey bridge roundabout along Nokonoko Rd in Nasinu which the letter writer believes is causing a lot of confusion among drivers. Picture: SUPPLIED.

LAST month I witnessed two accidents at the Jerusalem Rd roundabout in Nabua and I was almost involved in one myself that prompted me to look further into the management of the flow of traffic in this hazardous spot.

I was clearly adhering to the road markings when another vehicle travelling in the same direction changed lanes and almost collided with my vehicle. After being sworn at, the other driver drove off in great frustration.

When travelling along the double lanes on Nokonoko Rd from the Ratu Dovi Rd side towards the roundabout, both the lanes have markings that you could either drive through towards the Asco Motors side or make a left turn going towards the Golf Link Rd.

The authorities I believe have created a huge road hazard with incorrect road markings that is causing inconvenience to the motorist.

I am not very sure how the police deal with the accidents there and I believe that no driver should be charged because it’s not their fault.

The stakeholders and the enforcement agencies I believe have failed to pick this up and it has increased the risk of road accidents.

IT’S good that the Fijian Competition and Consumer Commission (FCCC) has now seen that the local bus industry is struggling financially (FT 11/01).

I would like to thank FCCC chief executive officer Joel Abraham for his prompt action and let’s hope that something positive will come out which will be a win-win for the bus operators and the public.

A BIG vina du riki valevu to the management and staff members of Consumers Supermarket in Namaka, Nadi for being such a massive convenience to the people of Nadi.

While most shops were closed during the festive season and as Tropical Cyclone Sarai approached, they remained open which allowed the Nadi public to do their last-minute shopping and of course prepare for the cyclone.

I must also thank the staff members for sacrificing their valuable time away from their families to serve the community.

I pray for God’s blessings upon you all.

IT comes as no surprise to hear people claim that prominent scientists deny there is any climate change emergency (Andrew Roger, letter FT 11/01).

We recall the same thing happened with smoking. A decade after a landmark ruling in which “a federal judge ordered tobacco companies to stop lying” and “to acknowledge the dangers” they “continued to dispute the scientific consensus” (“Contesting the science of smoking” The Atlantic 4 May, 2016).

Potential of our youths

I APPLAUD the dedication and determination of young Swedish environmental activist Greta Thunberg and this is one perfect example of how our own young generation can organise a good cause to bring a grand change in our developing nation to combat the effects of climate change.

With a ban slapped on single-use plastic bags, our young population are better in place to educate our society on the adverse consequences of plastics in our environment, including marine environment.

School is about to start and this is the prime time to use the young minds to advocate on the issues of plastics through oratory, debates, seminars, youth rallies, and so on to create awareness to the public at large on the future problems this can bring to our nation.

Greta is only 17 years old and her achievement on the global stage as an activist speaks volumes. I am confident as an educationist that our nation has many young and brilliant youths who are endowed with the hidden talents to take up challenges that would bring positive change for our beautiful nation.

What they need here is good guidance and support from parents and concerned leaders to tap their hidden talents and transform them into dynamic and vibrant young leaders of change to impact the mindset of the entire population.

Looking at the current tinder-dry condition causing widespread immense conflagration in Australia, there is urgency at our home front to prepare in many ways to safeguard the livelihood of our population.

SIMON Hazelman’s letter to this column on the topic above, (FT 10/01), I believe is very biased for he may have a personal reason to hate kava.

He must know that kava is different from alcohol and marijuana and moderate consumption has some health benefit.

Simon asked, “What good does kava bring to the nation?”

, Mr Hazelman, if you had done your homework well in researching, you would have understood that there are many benefits of kava to this nation than its disadvantages.