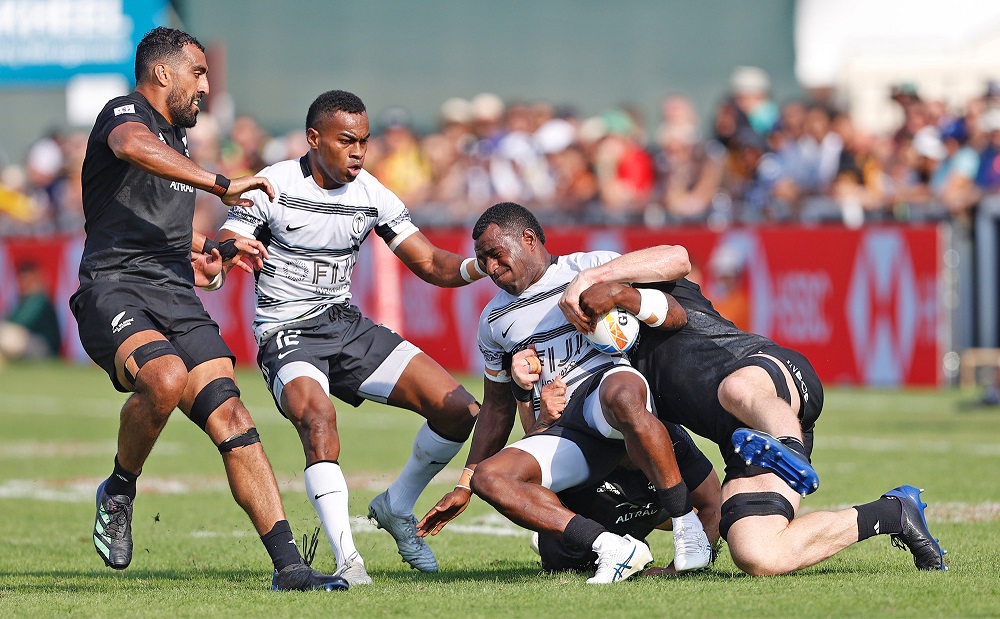 Filipe Sauturaga is stopped by the New Zealand All Blacks Sevens defence as Vuiviawa Naduvalo closes in support in their pool match of the HSBC Dubai Sevens tournament. Picture: MARTIN SERAS LIMA

Lessons for us in Dubai

Suffice to adequately say it is rather sad and most unfortunate for our men’s 7s side to have failed to qualify for the HSBC Dubai Cup quarter finals. There are huge lessons to be learnt for this failure. Pre-tournament talks for top finish worked against us. Guess it made us swollen-headed. Top level competition is fierce. For many die-hard fans, their weekend is spoilt. In future, no more predictions please. Ronnie Chang Martintar, Nadi

IN the FT edition of Saturday, December 3, 2022 is a story worthy to be an election platform for at least one or some of many election candidates, I certainly think. Why? That’s simple. The article by Siteri Sauvakacolo, titled “Discipline of children”, talks about the failure of society, specifically parents, schools and religious bodies to instill in our children some discipline. While we live in the here and now, we must also keep an eye on the future. And if we are true to our words when we say that we love our children and they are the future, then the words of High Court judge Justice Salesi Temo, must be a cause of concern. It should be such a concern that it must prompt a call for a conversation at various levels, including the national, on how this issue is to be addressed. This is to be a labour of love. If not, then we are creating (one of) the conditions that will lead to a real social and widespread problem in the very near future. SAILOSI BATIRATU Suva

Earlier this week you published photos of “graduate” prison officers turned out in uniforms and cropped hair indistinguishable from those worn by soldiers of the RFMF. I fail to see how such militarisation matches prison talk of programs encouraging communities and offenders to socially reintegrate -which itself begs questions best left to qualified researchers. Today we also read for the umpteenth time of escalating sex offences against children, as if it were new. Here again only proper research, not platitudes, can offer explanations and strategies. We further read (FT 3/12) of troublesome school students and hear blame entirely put on parents, the ministry, and errant individuals deserving of corporal punishment, instead of asking the more difficult questions of inequality and social change, which are the province of qualified social scientists: people trained to think not merely trained to respond silo-fashion in accordance with institutional demands. What is missing in Fiji is what is increasingly missing in Australia: universities which educate in the broadest sense not just universities in name. In this regard, Mr Rabuka (FT 3/12) is on the right path. The University of Fiji with its Meat Industry Skills, is not. Butchering should be left to apprentices and technical “colleges”. The economic, intellectual, and moral compass of USP should be repaired. Dr Christopher Griffin Perth, Australia

Numerous times I have been asked who I will be voting for. I will be voting for a principled person. He acts with integrity and honesty, with a strong sense of fairness, justice and respect for the dignity of the individual, groups and communities. He is candidate number 252. Did you know that 252 is also an angel number? Now you do! Wise Muavono Balawa, Lautoka

The global HIV response is in danger, as HIV remains a major public health issue that affects millions of people worldwide. Over the past few years progress towards HIV goals has stalled, resources have shrunk, and millions of lives are at risk as a result. On December 1, World Health Organization and its partners commemorated World AIDS Day 2022, under the theme “Equalise”. WHO called on global leaders and citizens to boldly recognise and address the inequalities which were holding back progress in ending AIDS, and equalise access to essential HIV services, especially for children and key populations. In commemorating World AIDS Day, Health Ministry PS Dr James Fong confi rmed 141 new HIV cases for the first six months of 2022. The number is alarming, and every effort must be taken to address this rise. The editor-in-chief summed this up with a powerful editorial: “We have a reality check! We are being reminded that HIV is a concern. The numbers are a worry! We have a major concern, and a challenge in our midst.” Fellow Fijians, we have a role to play in the fight against HIV! RAJNESH ISHWAR LINGAM Nadawa, Nasinu

March to the ballot box

The countdown for the general election 2022 had already begun the day our President Ratu Wiliame Katonivere issued the writ. It’s nine more days to the polls. While the applications for the postal ballots have closed, the pre-polling is scheduled to commence on Monday, December 5. Campaigns are gradually reaching its peak for some parties and candidates while others are still beating around the bush. On the front page of The Fiji Times (03/12), an interesting article is requesting all voters to march to the ballot box since one does not need a permit for that. Bullseye! Indeed, all eligible and registered voters should go to their assigned polling stations on December 14 to vote. It’s your constitutional right, so you better exercise your rights. I’m not going to tell you whom to vote for as the choice is entirely yours. Either tick or cross or circle the candidate number of your preference. Do not invalidate the ballot paper. Make your vote count! Mahatma Gandhi once said and I quote: “Your future depends on what you do today.” Let’s decide the future of our children and grandchildren wisely. DINESH KUMAR Ba

Congratulations to those students who have received their awards! Seeing them with their prizes brings back memories of my days when we looked forward to the school’s annual awards day, for we were going to be rewarded for our hard work and dedication throughout the academic year. Reading the story of the dux of Ratu Finau Secondary School Year 13 student Lore Sera Sarawa (FT: 30/11) refreshed memories from school days. I’m glad The Fiji Times was able to cover her successful story which inspired our students. Lore, who attributed her reward to the love and support provided by her parents, shared that she witnessed the struggles of her mother who carried the role of homemaker through caring for the family. She said her success was a result of her taking her parent’s advice to work hard at school. She urged youngsters to never forget the sacrifices their parents made for them. After reading her story, I glanced through the Kaila newspaper and I was thrilled to read the stories. The colourful pictures added glamour. Hats off to the Kaila! newspaper team for capturing aptly those special moments of our children! We bid November good bye with positive vibes and the message that hard work is rewarded. Rajnesh Ishwar Lingam Nadawa, Nasinu

In a rally I heard a speaker mention that Mr Rabuka will be borrowing money from overseas as well should he come into power and was comparing the borrowing line between both parties and making it seem like there won’t be much difference in terms of borrowing. What about the money going to waste? They don’t like the word “freebies”. Imagine how much money could have been saved if all the wastage was controlled and diverted towards the betterment of our country such as on public hospitals, infrastructure and developing a good education system. Proper allocation of finance and resources makes a huge difference. Well, we hope come December 14, things will change for a better, brighter Fiji. Kirti Patel Lautoka

WE read in the article “China’s Xi faces public anger: Students chant” oppose dictatorship ‘and’ Freedom! Freedom!’ (AP/ FT 30/11 p.24) that “Barely a month after granting himself new powers as China’s potential leader for life, Xi Jinping is facing a wave of public anger of the kind not seen for decades”. The public anger is understandable. Tyranny can only be tolerated up to a point. Remember that point had been reached in China in 1989 when the people demanded freedom, but the Chinese Communist State gave them the Tiananmen Square Massare instead. But the yearn for freedom lived on notwithstanding State repression and it has once again resurfaced publicly. And, once again State violent crackdown has started. Will we get another Tiananmen massacre? RAJEND NAIDU SYDNEY, AUSTRALIA

I WAS awed by the performance of Casemiro and Fernandes, one for Brazil and the other for Portugal. At the club level, they both manage the Manchester United midfield. Both played their hearts out to ensure their teams went into the past 16 in Qatar. Casemiro’s sublime strike was enough to ensure Brazil went into knockout stages. Fernandes, on the other hand, played like a demon possessed for Portugal. He was all over the pitch, hunting for the round ball. He was rewarded when his curler, which was meant for Ronaldo, flew directly into the net. The continuous pressure paid off when he earned a penalty. The cool, calm and collected Fernandes made no mistake from the spot. Portugal celebrated with the 2-0 over Uruguay. In the last World Cup, Uruguay stopped Portugal in their tracks in the last 16. Football is such, sometimes you laugh and sometimes you cry. ARUN PRASAD DILKUSHA, NAUSORI

THE political campaigns are at their peak and aspiring candidates make earcatching statements. The opposing parties read more than what it intended and thus the debate continues. Agni Deo Singh is a distinguished classroom teacher who knows how to handle children. He has also served for long as the general secretary of the Fiji Teachers Union and knows the plight of teachers under current educational circumstances. Different social groups have their own culture which has evolved over a long time. The clash of cultures is inevitable when they operate within an environment. Fiji’s colonial past impinges on its current cultural patterns. Hence the clash of opinions. In Western culture children can call their elders by their first name but this is repugnant in Pacific cultures. I believe Western cultures encourage their children to date and have premarital sex relations or to have live-in partners without marriage or to marry persons of the same sex. All these are repugnant to Pacific cultures. High divorce rates and the role of step parents comes into focus…..unacceptable to Pacific cultures. Therefore, I believe when zero tolerance on corporal punishment was introduced into our educational system it upset the apple cart. The fear factor disappeared and children became rebellious. I am of the opinion that corporal punishment should be reintroduced under strictly controlled conditions under the head of the institution. Currently teachers live in fear of losing their jobs. The rapid change of ministers and the permanent secretaries is another factor which has contributed to the unsettled environment in the Ministry of Education. DEWAN CHAND DONU PLACE, NAMADI HEIGHTS, SUVA