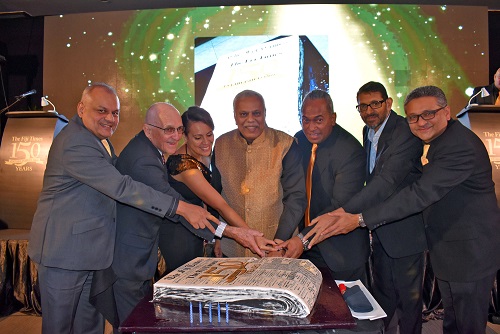 AS I congratulate The Fiji Times for turning 150 years old, I thank the staff members and management of The Fiji Times and the directors of Motibhai Group of Companies for making Friday night a memorable one for me and the high-profile guests who were present to witness the 150th birthday of our number one newspaper. I was honoured to be present at the GPH to rub shoulders with powerful names in the field of mass media. The night was elegant with the presence of a huge crowd at GPH and the MC Ajay Bhai Amrit was a wonderful host. Furthermore, the powerful and emotional words of Kirit Patel, Dr Anurag Subramani, Daryl Tarte, and Fred Wesley added glamour to the night and made the 150th anniversary special. It was a delight to meet my fellow writers Satish, Salwyn and Kini although we missed Allen, who I was supposed to share the dining table with. Meeting the likes of Pita Nacuva, Kameli Rakoko, Lenora Qereqeretabua and Hank Arts was also memorable. Thank you so much The Fiji Times for making me part of your team as I eagerly look forward to more exciting, challenging and heart-throbbing news! God bless The Fiji Times and may you strive for excellence! RAJNESH ISHWAR LINGAM Balgovind Rd, Nadawa, Nasinu

WHEN I came to Fiji in 1975, there were a lot of buzz phrases going around. The most common was “Fiji the way the world should be”. Indeed I could not have come to a more peaceful, well-governed, law-abiding country in many respects. Now unfortunately Fiji is rapidly trying to catch up with the way the world should not be. Of course we had the coups which sent us backwards, but now we are seeing a spate of multiple murders, “normal murders”, grotesque rapes, drug addiction, monetary scams of all sorts, assaults on police, dropping down the media freedom listings, failing to allow peaceful protests, the list goes on and on. The jails and remand centres are overflowing and even the most simple cases take months or years to get through the court system. Sure we are not by far the worst country in the world, but we are definitely climbing the ladder. ALLAN LOOSLEY Tavua

DESPITE all the ramblings that we Fijians are all on a level playing field and that no Fijian is above the law; the latest revelation from Parliament seems to reveal that there are two playing fields. The second one is only for the chosen few. A local lawyer drafted and submitted on social media the four charges and its penalties that would be made and charged against the PM if the alleged assault on honourable Tikoduadua went to a court of law in the first playing field. The incident has gone viral and other nations have mentioned the PM/Tikoduadua incident in its world news. Now what would right-thinking people the world over say, when they read or hear that the honourable MP, who was allegedly assaulted, is now the victim according to the law, rules and regulations only for the chosen few in the second playing field? According to the second playing field, the victim who refused to apologise is to be suspended from Parliament for six months and all our leaders in Parliament who support this action are pleased with themselves? What a joke! Common sense would prevail for the PM alone to apologise and the whole Parliament continue with the work of building and moving our beloved nation forward. Come on the second playing field, do the right thing! SAVENACA VAKALIWALIWA Lakeba St, Samabula North, Suva

EVER heard of that saying “the truth will set you free” or as I like to say in iTaukei na dina. If we can at least be truthful in whatever we do in our daily lives, then only then can we move forward as a nation. Now when I’m saying this, the message is not only for the bigwigs in the big House, but for every Tom, Dick and Harry who calls Fiji home. Let’s be true to whatever task we have to do, whether it be sweeping the roads or cleaning out your own home do it to the best of your ability and with humility, a manager or a clerk or even as a parent or child do it with love. Sure there will be days when you will want to throw in the towel or be ridiculed by others for being a goody two-shoe, but all it needs is for you to take that first step and the ripple effect will be felt by the whole nation. Come on Fiji there is still hope for a better tomorrow. LAWRENCE WARA Santa Rosa, California, US

AFTER spending a week in Labasa trying to get few registrations of birth certificates for my grannies, I was flabbergasted by the tune of the service providers at the department. Birth certificates were not correct. For example, the name of another mataqali was inadvertently scripted on my grannie’s birth certificates. Are the systems not linked? What angered me was that in order to change a word, you need to pay $10.50 excluding the birth certificate itself. Asking assistance again, I was blatantly told that “it was from the top”. Are people in Viti Levu confronting the same? I have a feeling that people react viciously to this and believe me, there must have been few “punch ups” along some office. I have a feeling that these institutions are service providers, but gone are those days. Are they now money generating institutions? Yes, I understand, that for processing there is a fee, but not too exorbitant as to what we are witnessing now at the RBDM. I rest my case. JOJI TORONIBAU Navetau, Natewa Bay, Cakaudrove

AS Nehemiah 4:14 was read in church last Sunday, I thought to myself now this is scripture that could easily be taken out of context, misread or misunderstood in Fiji right now. It said – “After I looked things over, I stood up and said to the nobles, the officials and the rest of the people, don’t be afraid of them. “Remember the Lord, who is great and awesome, and fight for your brothers, your sons and daughters, your wives and your homes”. For those who may wish to use it to justify their actions past, present, or future maybe you need to hear our senior pastor expound on this topic especially with regards to the purpose/potential of a Christian home. If we all understood it then our prisons will not be full of Christians. Yes, Christians also make up the majority of the population of Fiji, but unfortunately our last 2017 census chose to be silent on the exact figure. KORINA WAIBUTA Knollys St, Suva

HAS anyone kept track on this government initiative and how many trees have been planted so far? Or is it another dream that looks good on paper with a different story on the ground? PITA SOROQALI Nadarivatu

I DON’T watch Parliament on TV, but I do when someone sends me a message to watch something that may interest me. In Parliament the members refer to each other as honourable. This honourable in my opinion could be just a title like Mr or Ms because the honourable part may have left the building long ago. ALLEN LOCKINGTON Kava Place, Waiyavi, Lautoka

IT was great meeting and working with you Nesbitt Hazelman on issues related to workers and employers over period of time. You were a true gentleman balancing things for betterment of all partners on different boards. Nevertheless, all the best for your achievements and future endeavours. The trade union fraternity along with employers will remember you for a long time. ROUHIT KARANA SINGH Fiji Local Government Officers Association president

I REFER to The Fiji Times article “A-G : Stop being dishonest” (31/8 ). I wonder who else apart from taxi permit applicants who the A-G singled out engage in the kind of fraudulent, corrupt and dishonest behaviour the A-G identified? RAJEND NAIDU Sydney, Australia

I WAS saddened to read about the passing away of former Springboks wing and ’95 RWC winner Chester Williams. A true pioneer in South African rugby, Chester has left memories that will be forever cherished. His passion and enthusiasm as a player and coach will be missed. RIP Chester! RAJNESH ISHWAR LINGAM Balgovind Rd, Nadawa, Nasinu

THE Emperor’s New Clothes – was this about the blindness of the emperor, the cunningness of the two weavers, the gullibility of the crowd, or the honesty of the kid that called out his nakedness? RICK EYRE Lautoka