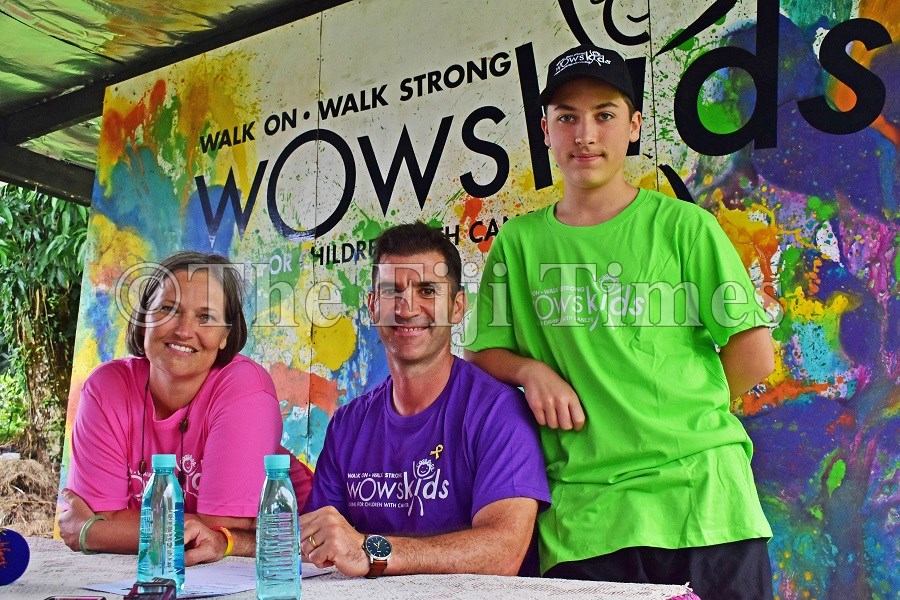 National 7s coach Gareth Baber had every right to make yesterday’s front page. Apart from going out on the prowl for new and exciting 7s players at the Marist 7s tournament, the Welshman has pledged his support for WOWS Kids Fiji. Baber has registered for the ‘Great WOWS Walk’ where he will be walking 50km in 14 days to raise funds for the welfare of children diagnosed and living with cancer. Recently, The Fiji Times reported about the Suva SUPers team, a group of professional paddlers, who raised more than $3000 for the ‘Great WOWS Walk’ challenge after they completed 14 days of paddling. According to Baber, the COVID-19 pandemic and the interactions he had with Fijian children gave him time to think about how he could help young people. He highlighted the importance of generating awareness on such issues to ensure support for children and their families and, at this juncture, I whole-heartedly thank and acknowledge the efforts of our courageous newspaper The Fiji Times for being part of WOWS Kids Fiji and for raising awareness on childhood cancer. Just like Baber I also felt privileged to be part of WOWS Kids Fiji’s fundraising campaign to support and assist children living with cancer. Thank you Baber for your contribution! I also thank WOWS Kids Fiji and The Fiji Times for everything that has been done! Rajnesh Ishwar Lingam Nadawa, Nasinu

While the PM has potently denounced former Qorvis employee Graham Davis for his so-called evaluation of Fijian democracy, I believe it was no different when our democratically elected governments were toppled in the past with the barrel of the gun and balaclavas. The traumatic events of 2006 were no less of an assault on Fijian sovereignty and its citizens, leaving the already fragile economy in tatters. The PM should heed that. Nishant Singh Lautoka

We have noticed that in Suva when a shop is undergoing renovation the owners in order to beautify the frontage normally tile the pavement as well to match the interior or the walls of the building. This is a good marketing tool to lure in prospects as the eye-catching colours add on to the positive environment created. With devastating music and excellent displays of goods is a perfect marketing mix which bargain hunting customers will not miss. However, a few of the outlets have made a poor selection of the outside pavement where the usage of the smooth non-traction tiles are utilised. It may be fine in the dry weather but during the adverse weather a slippery hazard is created. Anyone with unsuitable feet are at risk of falling over and many become victims of this threat. Such renovations and improvement to buildings must be subject to architectural drawings and engineer’s approval. The engineers must be mindful of the type of materials used in order to be in line with the National Building Code to ensure acceptable standards of structural sufficiency are maintained for the benefit of the community. Satish Nakched Suva

My knowledge of the terms internet, data, wi-fi, etc., is next to nothing, my phone and laptop usage is minimal because it was difficult to learn of new things and memory retention was already fading when these terms came around. The last few days we read Julie Sutherland reminiscing the walks along the sea wall and chatting with people along the way, nowadays more people are busy on their phones. The next day M. Imraz Janif suggested the ‘deep conversation’ she sees people having with their smartphones and “observe the movement of their hand (the one not holding the smartphone), I interpret it as as go away”. This bit about the movement of the other hand not holding the phone is ambiguous, but I digress. The ‘470 pilot whales stranded’ (FT 24/9) talks about the dead/dying pilot whales in Tasmania, and ‘The discovery makes it Australia’s biggest beaching in modern times, and draws attention to a natural phenomenon which scientists say has no known cause’. Further down the article is ‘More than 600 pilot whales beached in nearby New Zealand in 2017’. Here I am, wondering if the never ending increase in the usage of this modern-day wireless energy has interfered with and confused the natural navigational tendencies of these beings. if there is an element of truth in this, later on humankind will be wondering as to why the discovery was ever made. Moses Fong Suva

The women market vendors of Ovalau have chosen a market site — the centrally located foreshore area opposite the central line of shops in Levuka Town. Their message is that the site of the old market is not suitable for them. A more centrally located site within easier walking distance of the shops, banks and post office would be a better choice for the women market vendors of Ovalau. Ecelni Naivadra Tuisowaqa Rd, Namadi Heights, Suva

I would like to thank Edward Blakelock of Pacific Harbour for his inspirational poems and letters to the editor. His poems are well written and his letters give a great insight into the everyday issues affecting our nation. His latest poem, “Pollution and minds” is brilliant especially the line “we should also endeavour to keep our minds free of rancour and negativity, our environment and our minds should therefore be nurtured and developed in a positive way”. I really do appreciate all your poems. Thank you, sir, for your wonderful writings and hope you keep on writing. Bhagwanji Bhindi Suva

These days I’m finding myself checking in and out of hospital on a regular basis for medical treatment and I’m beginning to enjoy these visits. Not only have I made friends with doctors, nurses, and other staff, but I get spoilt with love and care. Hospital can sure be a place to chill-out and relax if you set your mind to it! Despite the fun, there are also the challenges and every visit brings about something different, in a place where people are fighting for their lives. This time I was wheeled into a cubical in the men’s ward and placed on the bed next to two other patients, one being an iTaukei and the other a Fijian of Indian descent. Each cubical had four beds, leaving an empty one after I was checked in. We acknowledged each other and as the custom is after settling in, we made enquiries into the condition we were all in. We all looked the same age and it was interesting to note the similarities related to how we found ourselves in hospital. It was all due mostly to our poor lifestyles while growing up, the consequence of which led us to check into our hospital hotel! I received treatment and checks throughout the day and evening and into the night and was tucked into bed and out by 9.30pm. The following morning I was rudely awoken to the realities of life as the sounds of wailing and howling ran throughout the corridors of the hospital and I found out that my iTaukei friend, whom I had just met, had passed away sometime in the night. The cries of sorrow echoed the pain of the loss of a loved one that morning. I felt the sorrow from deep within as if I had known the guy for years. Our departing words of “goodnight” were the last we had exchanged. Such is life, in one moment, in the blink of an eye, it is all gone! What amazed me most of all was the attitude of the hospital staff in dealing with the situation. They were calm and collected as they sort comfort with the family and they very well knew what they were doing as dealing with the sick and the dying is a regular part of their job. Their work is admirable and definitely commendable and I have total respect for the profession they’re in! As for me, realising that someone may have passed away in the very bed I was on made me just about jump out of the bed and I couldn’t quite relax from then on and neither could I wait to leave. On the day I felt I was going to be discharged, I was packed and ready to checkout before the doctor even gave the OK. As far as I was concerned, I wasn’t dying on that day. I was outa there! Simon Hazelman Rava Estate, Savusavu

The football IDC pools seem to be a well-balanced one by taking into account the current performance of the teams. There were some upsets during the past weekend’s fixtures of the national soccer league and this only makes things better for football in the country. However, does this two weeks’ break before the tournament have much effect on the teams preparations? Can the teams continue with the same momentum as in the national soccer league? Pranil Ram Votualevu, Nadi

Besides the questions being raised after the Fiji Women’s Rights Movement survey revelations, the biggest question is what else do we not know? Mohammed Imraz Janif Natabua, Lautoka

I am waiting for a list of terminations to be announced by the relevant ministries or Government with respect to the various breaches highlighted by the auditor general. While the Government is focused on the allegations in USP, I think it would be worthwhile to clean its own back yard first. Kiran Khatri Samabula, Suva

Why don’t all the women get together and make a women’s party and try to win the election and then you can have as many women on the boards as you please. By the way I haven’t seen any complaints on why there are no woman street sweepers. Sukha Singh Labasa

Water may be a life-giver but would be a life-taker if one is not careful. If there is one thing we must do now, it is to teach our children about water safety. Life is precious people! Joeli Naleca Natabua, Lautoka

The Yasawa rugby team has before itself an opportunity of a lifetime and possibly a chance to create history. As the men from the islands take on Namosi, their fans will hold their breath. In their last encounter in Lautoka, Namosi barely scraped through. All in all, what an exciting encounter and for now, I would not rule out the possibility of an upset. Floyd Robinson Toorak, Suva