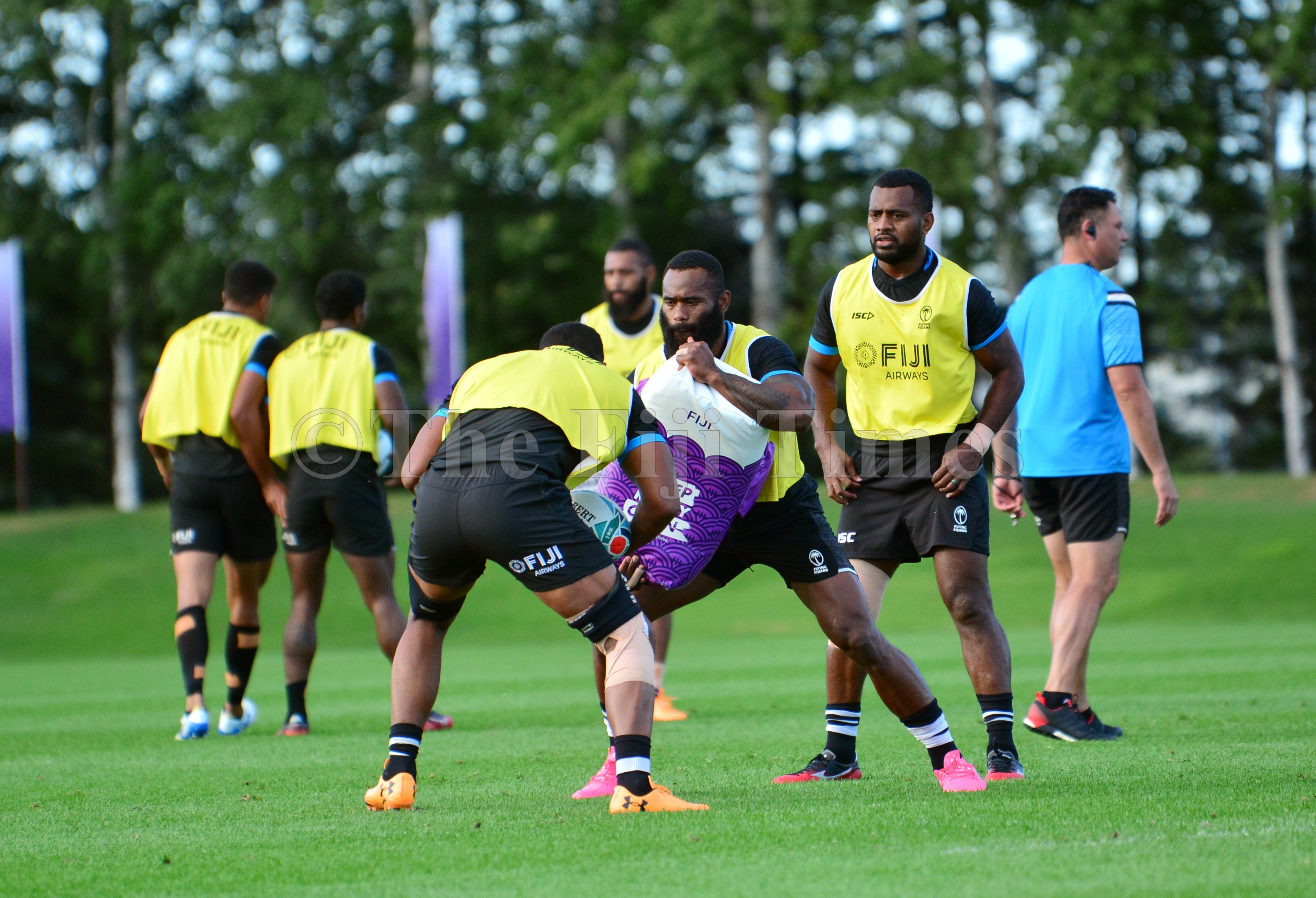 Rugged centre Levani Botia was quoted in yesterday’s The Fiji Times saying that the match between Fiji and Australia will be a game between two rugby brothers. He added that the Flying Fijians and the Wallabies had trained hard for this game. I take this time to remind Botia and our boys to please put aside the brotherhood for 80 minutes and do not give too much respect to our Fijian opponents in the Wallabies outfit although they belong to tier one. In the previous RWC, tier two team Japan upset the Springboks (34-32) while in 2011 Tonga upset the Les Bleus (19-14). In 2007 our boys upset Wales (38-34) and knocked them out of the quarters. I agree with John McKee that Pacific Islanders are the X-factor in rugby and I challenge our boys to put all the words into action at the Sapporo Dome on Saturday. Let’s talk little and unleash our energy on the field on Saturday in the Land of the Rising Sun. It’s time that our gifted athletes show their warrior spirit and the big hits that distinguished ‘The Stretcher’ and the late stallion Aminiasi Naituyaga. Tovolea mada Viti! Rajnesh Ishwar Lingam Nadawa, Nasinu

As our gladiators, the Fiji Airways Flying Fijians prepare to take on the might of match favourites the Wallabies, may all Fijians, both on our friendly shores and beyond, remember to say a silent prayer at your own privacy and convenience, from the innermost depths of our hearts, and in silence, for the success of our very own team, the dark horses, the underdogs….that they pull it off in their first pool match. We pray that they must believe and focus on their awesome task, at hand. Allow them to play good, clean, disciplined, hard-running open rugby. They ought to play as if it is the RWC 2019 cup final. Scripture tells us all about “David and Goliath”. Pray our team can relive and deliver this passage with pride, respect and dignity for themselves, their families and every Fijian on the face of this earthly home. Toso Viti toso. Tabu soro. Ma’e na ma’e. Ronnie Chang Mountainview, Martintar, Nadi

No matter how you feel on the day, get up, dress up, show up. Do not pray for an easy win, but the strength to endure a difficult one. Step on to the pitch, get the ball; know that it is yours. Run! Do not brake. Then, and only then you will have them by theirs. The win will come. Be humble. Praise the giver of the strength. Godspeed. MANOJ LAL PATEL Drasa Ave, Lautoka

I believe the Flying Fijians should play with a never say die attitude. With history heavily stacked against us, we have to continue to believe during every moment of the game. The Flying Fijians should draw inspiration from how they beat the NZ Maori and France. A common misconception among our players is that sometimes we show too much respect to bigger teams. I believe that whenever this comes into mind, players should nullify this by thinking about never say die. The team has to prepare mentally to overcome this. The players are well aware of the game scenario and I hope that the coaching staff have mentally prepared them well not to easily give in. I deeply believe that the team needs to play with more purpose. Australia must have done their homework and are ready to exploit our weaknesses. Flying Fijians should play smart rugby with much unpredictable nature. Go Fiji, go! Pranil Ram Votualevu, Nadi

Thanks to The Fiji Times for printing my letter ‘Fixing Streetlights’ on Tuesday (FT 17/09). Because this brought an immediate response from the FRA. They rang that morning to inquire about the lights and by that night we could see lights at last! It took nine working days after deducting four days for the two weekends. Wonder if it wasn’t for your printing my letter how long the repair would have taken? Imagine 17 days when we did not have lights! Norman Yee Mehrotra Place, Martintar, Nadi

At about $7, I believe Fiji beer is too expensive. I believe it should go with the price of fuel. In 1981, the price of petrol was 50 cents a litre. I believe the price of one bottle of Fiji Bitter was also 50 cents a bottle. Today petrol is around $2 a litre, while beer is around $7. My humble request to this present Government is, please I want to enjoy life a bit before I die. Reduce the price of the world’s best thing that I enjoy. Ajay Singh Lautoka

Several days ago a video went viral on social media of some of our brethren who now reside in the Land Down Under. What was disturbing was the profanity used against the honourable PM, now I’m not a supporter of him and his government but come on guys, let’s not go down that road. We as a people — that is iTaukei or kai Viti have our customs and traditions and one of those is “na vei rokovi” or to respect each other, irrespective of the situation. Hell my forefathers did when the late Vunivalu Ratu Seru Cakobau ceded Fiji to her majesty the Queen, he even respected his wishes when he called for a meeting on the chiefly island of Bau, so who are we if not descendants of such noble men to be as vile and portray such foreign behaviour irrespective if it is done on a foreign land. We are kai Viti first and foremost and with it comes our customs of which our forefathers had followed, let’s not get carried away with emotions and degrade ourselves to such behaviour. Reminds me of a song by the late Tupac Shakur Only God can judge me —let’s do our bit and leave the rest to God, if we protest let’s do so within the ambit of the law and let’s not go down to the gutter level and degrade someone or their families for that matter, let’s keep it Fijian. May God bless Fiji and its people. Lawrence Wara Santa Rosa

Over the past few weeks all we’ve been reading in The Fiji Times is the case between our Prime Minister Bainimarama, and Opposition MP Tikoduadua. In yesterday’s papers (FT 18/09) a total of four pages was dedicated to the issue. Yesterday’s papers (FT17/09) revealed five pages of discussion on the topic while most other days have had at least three-four pages strewn with the issue. The fact of the matter is that our PM did not punch Tikoduadua nor did he physically hurt the guy. Tikoduadua got emotional and spewed out a very personal verbal attack on our PM in Parliament. Our PM got equally emotional and spewed out a very personal verbal attack on Tikoduadua outside Parliament. Our Prime Minister has apologised while Tikoduadua has not. Tikoduadua has been suspended and our PM was not. Students are getting robbed on their way home and real murders are happening! Can we please move on with more important national issues that needs to be tabled and discussed. I will not be surprised that when the next parliamentary sitting comes we will still be talking about this issue. Everybody needs to grow a pair and get over it and move on. Vent your frustration and argument at the next election instead of wasting precious time and money. We sound and are acting like little kids fighting in a park. Politically petty indeed! Simon Hazelman Rava Estate, Savusavu

Fiji has a Parliament

I just learnt a little while ago that the Parliamentary All Blacks and the Parliamentary Wallabies are facing off in the final today. I wonder if there’s a possibility for any team apart from the usual participants — South Africa, New Zealand, France, Wales, Scotland, England, Ireland, Argentina, Australia, and the host (Japan this time) — to also enter. Looking at our own Parliament, we could form a team as well, a multi-party team. Getting into the World Cup may not be possible, but playing friendlies vs World Cup teams and also Samoa and Tonga would make sense. Those games would make good curtain-raisers for international symposiums and events held in Fiji and abroad. The idea would excite many, even the parliamentarians. A thorough medical check, some skills and fitness training at Albert Park would do miracles in no time. I am saying this because it’s already happening elsewhere. Donald Singh Lautoka

Fiji for Fiji ever Fiji, the way the world should see. Our flag flying high above the land of the sun… 2019 is the year the Flying Fijians can continue the trend of Tier 2 teams surprises in world cups. Samoa did it some years back to Wales, and most recently in 2015 Japan took the Springboks to the wire, now is it Fiji in line to complete a treble of historical wins, clipping the wings of the Wallabies on Saturday? We are all looking forward to the first newspaper published in the world, our The Fiji Times to break the news to us… rawa Viti, joka kece na cauravou … go Fiji. Toso Viti… just like Elvis Presley’s classic It’s now or never. Shalwyn Prasad Mukta Ben Place, Nabua, Suva

Through a tertiary law unit, I have learnt that if the facts of a case is similar to another, they should have similar rulings. I rechecked, it’s correct. Mohammed Imraz Janif Natabua, Lautoka

Can the Minister for Education please clarify the logic behind the student-free days when in fact external exams will finish off well before the end of school term? Pita Soroaqali Rakiraki

I would like to thank FCCC (Fijian Competition and Consumer Commission) for the reduction in the fuel prices effective October 1. We all are going through tough times now and this will be a big relief for all of us. I know there are some transport companies, especially the bus industry, which are going through tough times and this will be a big relief for them too. The situation in Saudi Arabia is a concern not only for us but for the whole world. They have assured that the production should be normal by the end of the month. This means that we expect to have a similar result for our next quarter. Once again FCCC vinaka vakalevu. Nardeo Mishra Suva

I still do not understand the reason behind celebrating two Father’s Day this year. Is it not a misunderstanding between the business community and the public? I am confused and so are the rest but I guess somebody needs to put it right in order for all to value the real essence of this day. Special church celebrations are even offered to commemorate the father figure of a home. God bless all our Fijian fathers in our beloved homeland and across the globe. Michael Mon Chambers Kermode Rd, Lautoka

I was interested in the timing of the announcement of the reduction in fuel prices to come into effect in about two weeks. I believe this is unprecedented length of notice coming at a time when the headlines screamed possible increase in fuel prices given the impact of the recent damage to Saudi oil facilities. I know for sure that the prices will increase and it seems our enjoyment of this temporary reduction, which has taken a long time to come, will be short-lived. The oil prices had been low over the past few months, and I wonder why it has taken this long for it to come into effect in Fiji. Within a very short period I am sure we will be confronted with the reality, and of course we were all warned! I believe a clever spin by the FCCC! Manish Chand Suva