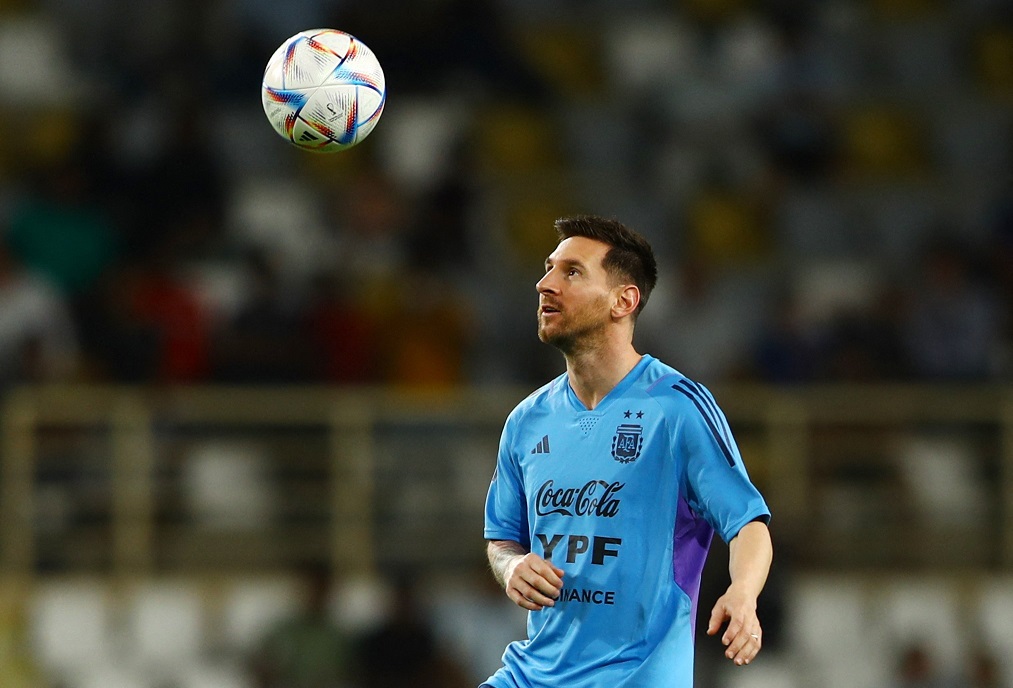 ARGUABLY the greatest player in football history alongside Cristiano Ronaldo, Argentina’s Lionel Messi will take a last shot at winning the 2022 World Cup. In 2014, Argentina lost to Germany in the final in extra time, thanks to Mario Gotze’s stunner, while in 2018 Argentina lost 4-3 to France in the round of 16. Apart from Messi, Ronaldo could also be playing his last World Cup alongside a host of veteran stars in the likes of Luis Suarez, Robert Lewandowski, Karim Benzema, Manuel Neuer, Gareth Bale and Luka Modric. Football will never be the same without Messi and Ronaldo. Wishing both stars all the best! The World Cup starts on Monday, and despite the pre-tournament controversies, Qatar is ready to host this year’s World Cup. It’s my wish to see Brazil win the Word Cup after 20 long years since the 2002 win. RAJNESH ISHWAR LINGAM Nadawa, Nasinu

THE recent FijiFirst rally at Syria Park in Nausori attracted hordes of merry-making supporters who were plied with food, drinks and other FijiFirst branded freebies. There were a lot of selfie moments with number 1 and 2 on that day as well.Oh well that’s one convenient party strategy to charm and captivate the audience to gain the much-required votes. After all, the governing FijiFirst party can effortlessly afford to flaunt the immense wealth (through chow and freebies) that they have accumulated in their 16 years of authoritarian rule. I wonder how many more political parties will adapt the “khawao peeyao” approach to entice voters. NISHANT sINGH Lautoka

Modernity is in the mind

WHOSE fault are all the kanikani infested grog dopeys walking the streets of Fiji? I believe it is definitely not theirs. So, it must be someone else’s fault. Whose fault is it that a number of provisional candidates were rejected by the SOE? I believe these same individuals have endlessly been calling for the election date to be announced and when it is announced, they cannot even get their act together. That is right, it is someone else’s fault – the courier company or the SOE or pie in the sky or potholes or the state of the hospitals, just take a pick. And these people want to run the country! JAN NISSAR NSW, Australia

THERE are rumours circulating that USP had sent out messages to students to not vote for FijiFirst. I checked with many of my students: not a single one has received such message. Those who spread such rumours should provide evidence that it is true what is claimed. In case media outlets spreading such information are not able to provide such evidence, they should be severely punished as the purpose is clear: to infamise USP among voters. Similar is how FijiFirst general secretary and Minister for Economy was recently mentioned responding to a student’s remark that the learning environment at USP is suffering from a shortage of funds. The source wrote: “USP still has funds; thus, they are making such remarks to students about the financial status of the university because they want the students to feel aggrieved, blame the Government and then refuse to vote for FijiFirst”. I could not believe that such a statement is brought up in connection to a person who claims has experience in managing huge amounts of money and draft budgets. To use one of the Honorable Minister’s preferred expressions: what is claimed in close connection to his person is “utter nonsense”. If several tens of million dollars are missing from Fiji Government contributions in an annual income of some 188 million dollars (in 2020) then the belt needs to be tied very closely, then resources need to be spent with prudence. Even an ignorant knownothing or layperson would be able to see this. One could discuss, if such prudence has always been applied, when USP spent extremely scarce funds, but to give the impression that anybody at USP makes up such difficult financial situation (“USP still has funds”) in order to harm FijiFirst and the present Government and to influence voters is indeed “utter nonsense”. The FijiFirst Government should publish the allegation against USP management so that people can see, what is alleged, so that people can discuss the matter. What kind of democracy is this, when since many months “ghosts” are discussed, which nobody other than a few very privileged people have ever seen. What some had published in the past was not really convincing to damage the educational opportunities of many people of an entire region. Some allegations were even entirely wrong and baseless, but sure, one only should judge when having seen all allegations. EBERHARD H WEBER, PHD University of the South Pacific

TWELVE months after it should have taken place, the 2021 Rugby League World Cup final is finally upon us as Australia prepares to face Samoa at Old Trafford. Hosts England saw its final ambitions dashed as it lost 27-26 in golden point to Toa Samoa at the Emirates Stadium last weekend. Holders Australia also had to work hard for their place in the final, but it came through a bruising encounter against New Zealand at Elland Road as it won 16-14. Australia coach Mal Meninga has not made changes following the win over NZ and while Australia has nothing to worry about injury-wise so far, Samoa has a few woes to overcome before kick-off. In their previous two matches against Samoa, the Kangaroos have not struggled in any department and they beat Samoa 44-18 in the Four Nations in 2014 before thumping them in the quarter-finals of the 2017 RLWC coming home with a 46-0 victory. Australia has grown with confidence as the tournament has progressed with the holders winning by 44 points or more in three of their last four. The 13-man code would be given such a lift if Samoa got their hands on the trophy, but that looks extremely unlikely, considering Australia’s form and performance levels – Australia to win! RAJNESH ISHWAR LINGAM Nadawa, Nasinu

SAMOA and Australia will clash in a historical and bruising encounter this Sunday at the Rugby League World Cup. For the Mal Meninga-coached Kangaroos, this is an opportunity to once again show case its superiority but this time against an initially lowly rated Samoa team. For the south seas islanders, it’s the ultimate, if not once in a lifetime opportunity to create the biggest upset in the history of sports. Samoa has the backing of its motherland and support of neighbours such as Fiji, Tonga and Papua New Guinea. This will be one hell of a match as the Kangaroos know too well that there are a number of young and talented players in the Toa Samoa who cannot be underestimated. England paid a huge price with a humiliating defeat in front of its home crowd which left their coach struggling to contain his tears in the post-match interview. There will be many players on both sides but in my opinion, this will boil down to a battle between Nathan Cleary of the Kangaroos and Jarome Luai of the Toa Samoa. If Samoa keeps up with its defensive efforts to suffocate the Kangaroos and slow down their speedsters, one can expect more screaming in Apia come this Sunday morning. Am looking forward to this match and tipping the men in blue to cross the try line several times. By the way, of all participating teams at the Rugby League World Cup, Samoa has the best jersey. FLOYD ROBINSON Nasese, Suva

GINA Rinehart, the Australian mining magnate and businesswoman was at Mar-a-Lago for Donald Trump’s announcement that he was going for the US presidency again in 2024. I guess that comes as no big surprise to people who know only too well how the ultra rich flock together ideologically and politically. RAJEND NAIDU Sydney, Australia

ANOTHER vehicle accident on Thursday at the junction of Grantham Rd, lower and upper Yarawa roads. Relevant authorities must act immediately to address the problem. Action is needed now. Delaying it shows lack of knowledge, understanding or the will power to address the matter. ASISH VINAY PRASAD Raiwasa, Suva

IN Fiji, only the luckier and privileged citizens get to enjoy enviable employment beyond 55 and well into their 60s and 70s. A few, into their 80s. These are the truly privileged class. To them, poverty is invisible. Deeds, not words. The poor have no voice. They suffer silently. The truth hurts. Some like to call it fake news. RONNIE CHANG Martintar, Nadi

WHAT is the objective of the Pacific Cup Football? PRANIL RAM Votualevu, Nadi

ONLY 45 (18–20 years’ cohorts) voters registered from abroad for the 2022 General Election according to the latest FEO statistics. I’m pretty sure that there are many young people of this age living overseas but probably chose not to register? Maybe our overseas writers can strategise on ways to get them to register in our next 2026 election! JIOJI M CAKACAKA Tadra,Votualevu, Nadi

SOME royal watchers predict and say, that King Charles will most likely, abdicate before his coronation in May. This means his formal reign, may not be for very long, probably come to an end, after only a few months has gone. The reasons given, are not really clear or specific, but they are quite adamant, his reign won’t really be as hectic. We will just have to wait and see, what the future for the Monarch will be EDWARD BLAKELOCK Pacific Harbour