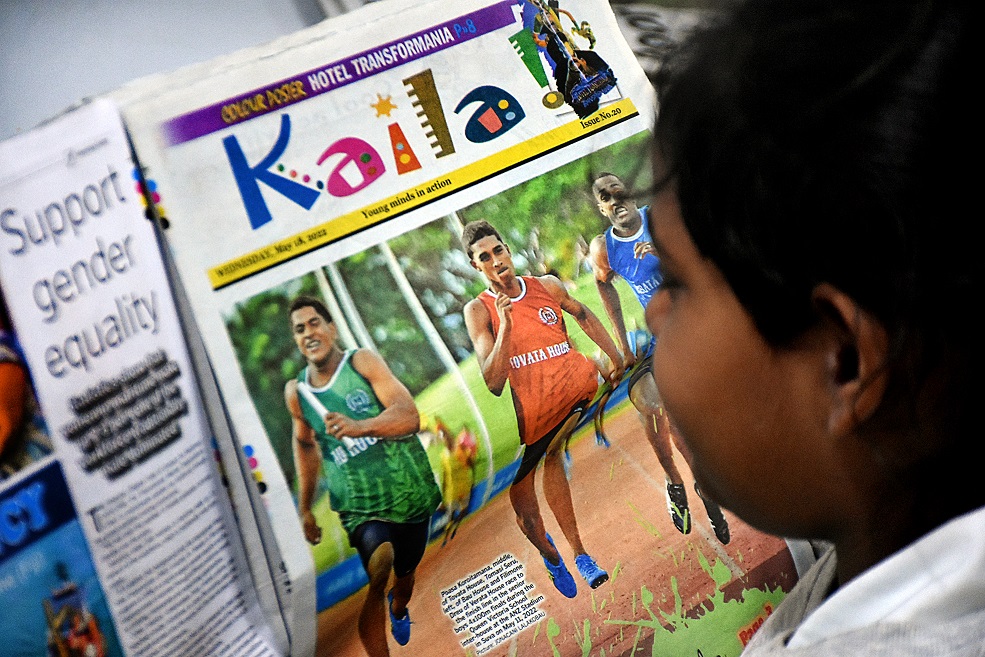 A young reader browses through the Kaila! issue this week. Picture: ELIKI NUKUTABU

I am thankful to the Kaila! newspaper team for the inspirational leadership stories that they share week in week out. Reading the experiences of the school prefects brings memories of days we were in school, proudly wearing our prefect’s badge. Sadly, those days our stories were not captured, and I wish we had what today’s generation has- access to print and social media. The Kaila! newspaper means so much to students and those students whose stories and pictures are published keep them safely secured and show them around to their loved ones. I have personally witnessed this. Harold Koi and Sophie Ralulu, who are in charge of the Kaila! newspaper, Meli Laddpeter, Lillianne Matai, Savannah Waqalevu and the Kaila! team deserves a pat for creating a weekly literary piece for our children. Editor-in-chief, thank you for having the Kaila! newspaper in your weekly Wednesday newspaper! The newspaper is achieving its purpose in inspiring, informing and educating young minds. It is making a difference in children’s lives. Rajnesh Ishwar Lingam Nadawa, Nasinu

The first tournament of the Fiji Football Association calendar is back. I am sure football fans are excited to watch their teams in action. I am confident that the top brass in the national football coaching panel will be anticipating good football standards and scouting some young talents. In my honest opinion, I think it’s back to the drawing board for our players and coaches. With the World Cup qualifiers out of reach, it’s about resetting goals and getting priorities right for the team as they continue to pursue their ultimate dream of taking part in the football World Cup. I wish all the participating football teams all the best in this three-week-long tournament. Pranil Ram Votualevu, Nadi

Your correspondent William Rosa (19/5/22) has failed to understand the linguistic situation in Fiji and the basics of second (or foreign) language teaching. First it is incorrect to claim that “many” people in Fiji are “proficient and fluent” in English. There has been no scientific survey for about 20 years, but I would estimate that the percentage of the population who speak fluently any variety of standard English is at most two per cent. Then there might be three per cent for whom Fiji English (including Fiji pidgin) is a first language. The remaining 95 per cent are proficient and fluent, though not necessarily literate, in Fijian, Fiji Hindi, or some other language. The extent of knowledge of English among speakers of it as a second language is unknown, but there is agreement among experts that the standard of English in Fiji, even among professionals, has gone down. Like your correspondent, I am critical of the way it is taught in schools, but for a different reason. It is a basic tenet of language teaching all over the world that it is best done in the child’s first language. For example, Japanese children learn English through the medium of Japanese, having acquired literacy in Japanese. So I believe that unless we start teaching English through the medium of our vernaculars, the standard of English will continue to plummet. Paul Geraghty USP, Suva

I understand that in June last year, Government had called for a tender for a social media management company. The successful bidder would need to operate Government’s social media platforms, raise public awareness on the business of government which must be in line with the interests of the Fijian audience. Do we know which company got this tender? If positive, what work has the company done so far? I ask these precisely because as we are being continuously reminded, there is indeed a lot of lasulasu and jhoot on social media which needs to be countered. It is creating a different type of three sides to a story. Mine, yours and the lasulasu (and jhoot). Mohammed Imraz Janif Natabua, Lautoka

WHO’s findings reported in The Fiji Times (19/5) that all variants including the Delta variant that is dominant worldwide can cause severe disease or death, in particular, for the most vulnerable people prevention is always key. The onus is on us to prioritise our safety and security to save lives. Concerns for COVID protocols matter most. Social distancing and masking —your choice! Tahir Ali Hamilton, New Zealand

Congratulations to former Suva Rugby Union secretary Tevita Tuiloa for being appointed to the board of directors with FRU. Indeed the motive is to continue the uplift of Fiji rugby alongside the rapid rise of women’s rugby. Definitely, he is a team player with a positive vision to see rugby union taken to the next level. On the contrary, the Fiji Football Association has launched its first football development curriculum titled ‘Totolo Futupolo’. The same old grassroots football is again a significant part of the association. Fiji FA has also introduced FUTSAL and Beach Football, only to see both the codes die a natural death. Compared with rugby union it is smiles galore in both the 7s and 15s codes, with women’s rugby gaining momentum. Fiji FA’s focus now shifts towards the Digicel sponsored Fiji FACT to be played over three weekends. Definitely, the last round of pool matches will see the most goals scored. I will not be surprised to see more district coaches and officials resign as funds will become scarce. To all players, make the most of your soccer careers financially, when your career is done as a national rep, you will be inducted into the Fiji FA Legends Club and will be given gold passes to attend all events organised by Fiji FA, pathetic! In the meantime, condolences to the family of recently inducted former national midfielder Vilitati Lee to the Fiji Fa Legend Club. May his soul rest in peace. Raymond Singh Golf Links, Lautoka

What a bizarre statement made by the Attorney-General and Minister for Economy Aiyaz Sayed-Khaiyum that the Government’s Facebook page is where the people should go to for we have all the information there that is the source of truth. (FT 20/05). I want to remind Mr Sayed-Khaiyum that we the Fijian people are no longer passive in the matters that concern us, for we ourselves can figure out what is true and what is not hence the Government’s Facebook does not have to tell us that. Someone said that there was no single version of the truth but the truth would speak for itself. Therefore, Mr Sayed-Khaiyum the truth that the iTaukei land will be taken away from us or not will reveal itself and does not have to be revealed by the Government Facebook page. I believe time will tell! Kositatino Tikomaibolatagane Vuninokonoko Rd, Navua

With more than half the population under poverty, can the “concerned” minister tell us how to make “adjustments?”. Those families who only have one meal per day that too with struggle, how can they adjust? How about that minister makes some adjustments to his salaries and give some to these suffering people. Kirti Patel Mohan Singh Pl, Lautoka

They said rising food prices will have little effect on us and our families if we are willing to make adjustments. How about first make reduced adjustments of your pay to our level. Then make absurd comments like that. Kemudou! Wise Muavono Balawa, Lautoka

The stray dog population seems to be increasing exponentially and especially in the town and city boundaries. Dog poop can be seen on and around the road and it’s an eyesore. If one is not careful they will surely step on it and what an unpleasant situation that will be. During nights it’s so difficult to sleep because of the noise created by these stray dogs. When will the Agriculture Ministry or municipal councils start the stray dog capturing campaign? It looks like this is a never ending story. Pranil Ram Votualevu, Nadi

SOME are calling for a public debate between a lawyer and a unionist. Can a seasoned economist be included also in the debate so they can argue with facts regarding our huge debts and financial status and where we’re heading, downwards or upwards? Nanise Soko Suva

A lawyer and a unionist, umm… how about a seasoned economist to debate with? AREKI DAWAI Suva

“Of coups” seems to be the favourite subject pre-elections. They have been dusted with. If you do not have anything else to say, get out and stay out of Parliament. Talk about paper weights. Joe Matatolu Waila 3A

Well Allen did not say why Rabuka and Biman came to see him. I think they want Allen Lockington to campaign for them or they want to give him a seat. We all know Allen has been serving the people for a long time. By the way a lot of candidates have said they want go up to Parliament to serve the people. Sukha Singh Labasa