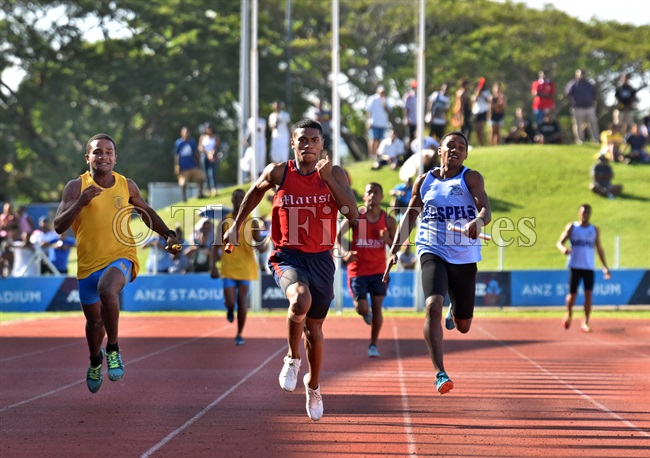 I attended the Suva Zone II athletics meet on Wednesday and I was impressed with the talents that shone during the meet. Suva Grammar School dominated the track events and won both the boys and girls division. The boys scooped 28 gold, 24 silver and 15 bronze, while the girls claimed 26 gold, 23 silver and 24 bronze. I pay tribute to the athletes from the Nasese-based school and their coaches — the likes of former sprint King Jone Delai and Navitalai Naivalu. The Grammar athletes stood out with their fitness and they were focused on winning the meet. Their closest rivals Marist and St Joseph watched as the Lions walked away with the spoils from the meet. The Suva Zone II concluded on Wednesday, while the Suva Zone I finished yesterday as RSMS and Nasinu Secondary battled for the boys division and BMS aimed to win the girls division. Our athletes are making endless sacrifices to meet time and standards required to qualify for the Fiji Finals and their teachers, coaches and parents are doing the same. The NNN zone will be worth watching especially in the boys division where RKS and QVS will come head to head for supremacy. But for now, congrats to Suva Grammar School and all the best for the Fiji Finals! Rajnesh Ishwar Lingam Nadawa, NAsinu

This week saw the convergence of field and track athletes in various divisions around the country. It was so good to note the enthusiasm in our teenagers in preparation for the national meets in weeks to come. The secondary schools from Ba met at Churchill Park in Lautoka on Wednesday and Thursday to successfully participate in the Ba zonal meet for 2022. Congratulations to Xavier College for being crowned the overall winners for the Ba zone. Actually it was a clean sweep as XC led both the girls’ and boys’ divisions at the end of day two of the competition. And the icing on the cake was that 13 records were broken during this competition. Congratulations to all the other place-getters as well who have booked a spot for this year’s Coca-Cola Games. Wishing Ba Secondary Schools Athletics Association all the very best in their preparation towards participation in the national competition. Keep the Western flames burning in Suva. DINESH KUMAR Ba

I had been regularly in and out of the Kalabu Village area in the past and boy the lovo pits in the middle of the road, until two weeks ago. To my amazement, a newly tarsealed road glowed before my eyes. “It’s a miracle,” I shouted, until I found out that you know who was coming to town or village as it were, to open the provincial meeting. Maybe the gang at Waiyavi should have invited him to do the opening of the new mall (The Hub). Missed opportunity! Edward Kumar Waiyavi, Lautoka

I penned a letter to this column on 3/5, requesting LTA and FRA to urgently install speed limit signs including road humps to curb the issue of speeding on Ovalau. So far, nothing’s been done and unfortunately, an accident occurred on Wednesday morning (15/6) at Vagadaci whereby an innocent pedestrian was motored down because of speeding. Sadly, the casualty was transferred to Suva on a stretcher at the back of a twin cab, on the afternoon of the same day, by boat, exposed to the elements, as my earlier LTE requesting for a replacement ambulance has somewhat hit a brick wall. Are we waiting for more accidents to occur before the authorities concerned act on such? Anthony Sahai Ovalau

The Fiji Sugar Corporation CEO claims that the ailing sugar industry “stood tall” during the pandemic and continued to support our fragmented economy with the so-called unwavering support of the present Government (FT 17/06). I’m sure the Sugar Minister must be flattered by your statement, Mr Singh. On the contrary, I believe this once vibrant industry has suffered immeasurably in terms of economic sustainability and productivity for the past 16 years, despite being repeatedly guaranteed that FSC is not a penniless or a technically insolvent entity. If such surety holds any substance, then I strongly believe that spine busting sugarcane farmers who had been slogging the fertile lands for generations would not have hastily abandoned this lucrative sector in masses and alternatively adapt to more financially viable livelihoods. Yes, Bhan, we can positively rekindle the sugar trade and acquire the much needed monetary yields if only we have a change in existing governance. Otherwise, with the PM’s distorted vision and absence of direction towards this once wealthy industry, I assume it will take another 16 lengthy years to reach some degree of fruition and sweetness. I believe sugar-coating facts to influence the common people and your superiors will not help in the revival of this defunct industry Mr CEO. Nishant Singh Lautoka

A letter writer from Down Under (FS 17/6) is obsessed with or perhaps frightened to the hilt about the The People’s Alliance and NFP coalition for the next general election and devotes a lot of his letters on this issue. He has perhaps not heard about the (modified) phrase “Politics makes strange bedfellows”. So there is nothing wrong in these types of arrangements as long as it meets the objective for the greater good. It happens all the time and everywhere. Ajai Kumar Waqadra Coop Rd, Nadi

The recent article about fathers in Nairai, Lomaiviti, filing their grievances in an effort to have control on their wives’ decision on not having a child was so shocking to read in this day and age. I was lost for words on the lack of equality for women in our country. This is a basic right that women should not have to fight for. Having a child is not as simple as ejaculating in a woman. It is the nine months of carrying the child through term, dealing with the pregnancy symptoms, it’s the painful child birth. Women also do the cooking and cleaning for the family. Some of these women have jobs to go to. They also do majority of the child care once it is born. It’s infuriating to read such ignorance coming from these women’s life partners. The perspective these men have on their wives’ rights sounds like these women are not human beings, but an equipment to manufacture children which the men will not feed, bathe or take care of, but play with the child for a few minutes a day thinking they have done their duty as a father. Women assess their capacity to be a mother therefore, plan when they want to get pregnant which… is their absolute right! If it helps to understand why it is so wrong to even suggest that men have a say in their wives’ decision to take birth control pills, imagine women going to the health ministry asking their husbands to get vasectomies. Just as a man has a right to decide if he does or does not want the ability to have a child, women have this right too. I agree with the Fiji Women’s Rights Movement’s comments on this matter that was published on June 13, 2022. “Women not properties”, that one of the leading causes of death for women is reproductive cancers. We should focus on women’s reproductive health and making resources available for women to access easily. Let’s not forget that not all men share the same opinion as these men. I urge that we educate our citizens better and hopefully we can understand that human rights are not humane if women are excluded from this. I hope the Health Minister is able to communicate women’s rights to these people and stand firmly for these women. Bhaona Mohammed Canada

Just as one was beginning to enjoy the kawakawa and donu, one realises that as of June 15, the ban or harvesting or sale of the delicacy comes into effect. For now, those who love their donu and kawakawa will need to resort to other choices. I am looking forward to the famous dokonivudi and kabatia. Meanwhile, fishermen are appearing with walu at the Lautoka fisheries wharf. This is interesting as walu is known for its abundance in the later part of the year from October onwards. For now, I am looking forward to purchasing a lovely sized donu at the Lautoka wharf for that delicious meal when cooked in steam the Chinese way. I can’t ignore walu as it is second to none in terms of kokoda. Whatever one’s views, let us support the Ministry of Fisheries with this seasonal ban as this is in the best interest of us and our future generations. Floyd Robinson Toorak, Suva

I believe people crave for change. Change to return their country back to where the Pope once described Fiji as “The way the world should be”. Dan Urai Lautoka

Recently I wrote in a letter to The Fiji Times that people in power have a tendency to engage in self-praise when they are in power for too long ( FT 4/6 ). Russian president Putin provides a good example of that by comparing himself with Peter the Great, the 18 century Russian conqueror (SBS News 11/6 ). It confirms his megalomaniacal mindset. Rajend Naidu Sydney, Australia

With the energy and electricity demand increasing rapidly, will the demand for power outstrip supply and we have to face more outages in future? Pranil Ram Votualevu, Nadi

I think if any ruling party was confident of winning a general election, it would proceed to hold elections at the earliest available opportunity. Mohammed Imraz Janif Natabua, Lautoka

A number of letter writers including Mr Yee and Chang continue raising issues of abrupt and unplanned power disruptions and blackouts and the countless damage to electrical appliances. I believe you can’t expect any improvement in EFL services as long as you have leadership left to feather theirs and others nest for a long time. Ajai Kumar Waqadra, Nadi

Since Agriculture Minister Dr Mahendra Reddy knows why God intended PM Bainimarama to be born in Fiji ( to give equal citizenship to Fiji Indians) can the honourable minister also tell us why A-G Aiyaz Sayed-Khaiyum was born? Rajend Naidu Sydney, Australia