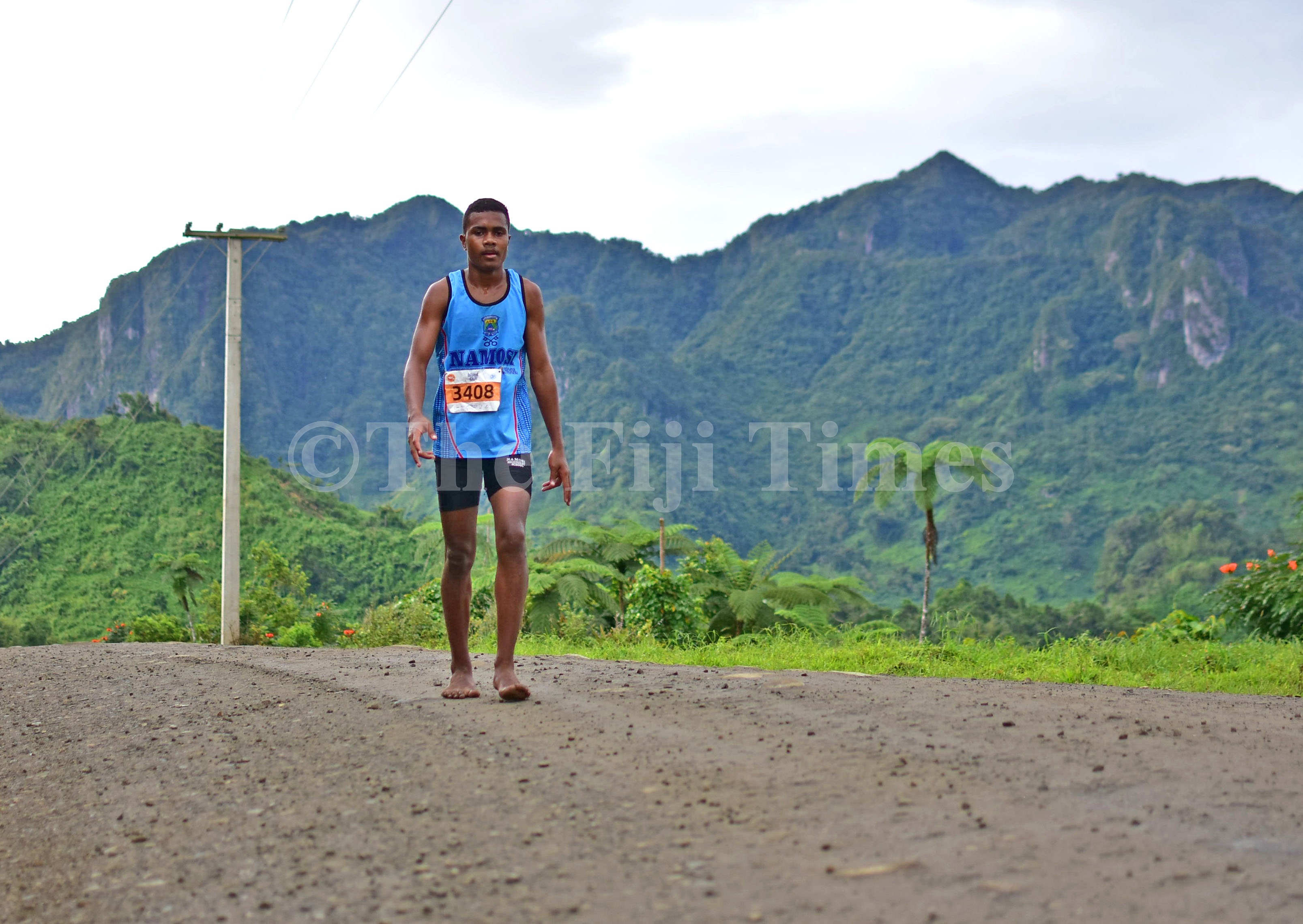 THE fittest will survive when the Munro Leys Namosi Marathon kicks off today with about 300 runners. Event director Marita Manley, via The Fiji Times, (30/06) shared that there had been a lot of interest from stakeholders after a successful maiden event in the highlands in 2020. She added the highlands brought a different vibe which uplifted the expectations from the event. I have been following stories and pictures published in The Fiji Times and I thank the trusted brand for giving organisers of the race an opportunity to share their views. Apart from the runners, fans are looking forward to the marathon. RAJNESH ISHWAR LINGAM, Nadawa, Nasinu

I WANT to remind the Attorney-General and Minister for Economy Aiyaz Sayed-Khaiyum that when members of a house differ in opinion, that is what one calls true democracy. When he claimed that the FijiFirst party, under the leadership of Voreqe Bainimarama, never differed in opinion, I believe that is what one calls dictatorship. KOSITATINO TIKOMAIBOLATAGANE Vuninokonoko Rd, Navua

AS the price of fuel continues to rise, the volume of traffic on our roads is expected to significantly drop because of budgeting and unaffordability. I am sorry to say that our time for leisure trips is over as we need to keep our family fed before anything else. It is advisable to travel if it is really necessary to do so. Ukraine and Russia’s war battle is now showing the real effect on the world. We’ve come out safely from severe situations only through our steadfastness and wise thinking. Let us remain that way so that we are able to navigate through any rough passage that comes our way. The adage “that no cloud is so thick that the sun can’t shine through” comes true. Your life is in your own hands so control it. Inclement weather will come and go away. Let’s pray that things get better sooner rather than later. SURESH CHAND Nadi

Mr Jan Nissar wants to know how come some union leaders are still in office for decades (FT 30/06). Simple really. “United they stand, divided they fall”. Something you can learn from. Unlike some empty rhetoric blasting away from far, far away while some of these leaders went through pain and suffering by torture and yet stood their ground to fight for workers’ rights and the plight of those in poverty, which you wouldn’t understand as you may be denying that poverty exists here in Fiji. EDWARD KUMAR Lautoka

DOES anyone know if the speed cameras in Fiji are active? Asking for a friend Although I tried, I mean the friend tried to test it by following a Viti minibus going 100kmh, the result is inconclusive. The test had to be hastenly aborted as the terra shuttle came to a screeching halt, then proceed at 10 kmh. It could not breach the mile-long stretch of Priuses having a hard time catching up to a cane-laden truck going at 40. I guess the friend will just have to wait for the speeding ticket in the mail. Meanwhile, the Priuses have taken over Fiji roads like locusts. Unfortunately, they can’t be driven above the speed of 25 kmh. I guess those guys have nowhere to go to because they are all on Fiji time. PRANEET SINGH Ba

A COMPOUND material known as plastic has become a global talk. While some countries have adopted sustainable disposal methods, some have simply come with a decision to ban its use at various levels. I am wondering how come one small commodity which is linked to many stages of economic activity and basically at small and medium business level is been seen as a major threat to the environment. What makes it even more interesting is when environment workshops are held in luxury hotels for more than two days or activists and leaders prefer driving or get driven in high-end vehicles just to talk about plastic and later ban it. I would suggest the concerned stakeholders to do a thorough research on its ban or heavy levy as to how it will affect the livelihoods of really small businesses. SHARVEEN CHAUDHARY Verata, Nausori

FUEL prices have gone up again. I am wondering what my Government can do about fuel prices to help businesses and the people. How about Fiji try and source its fuel from other countries, just like how some countries did with our sugar. NARAYAN REDDY Lautoka

ON a day when rise in the minimum wage level should have been making the headlines, I think the concentrated focus on the cost of living diluted it. And complemented by the July 1 fuel price announcements. If the cost of living were to increase at this rate, I wonder if the living part of the equation is actually getting suffocated to death. Talk about headlines or the lines across our heads? MOHAMMED IMRAZ JANIF Natabua, Lautoka

KNOWN as ‘The Bossman’, former Namosi rugby star and the man who sizzled his way to the try-line for the Swire Shipping Fijian Drua side, Vinaya Habosi, has a mammoth task on his plate as he battles Israel Folau, who is one of the deadliest and clinical finishers in world rugby, in Fiji’s PNC opener. Habosi, who impressed rugby pundits in the Drua’s inaugural Super Rugby campaign, will make his debut for the Fiji side. Fiji will be playing in front of some passionate fans so performance is expected to be top shelf. Apart from Habosi, the likes of Hetet, Ikanivere, Saulo, Nasilasila, Ratuva, Kunavula, Nasove, Tuisue, Lomani, Tela, Ravouvou, Nayacalevu, Wainiqolo, Tuicuvu, Matavesi, Mawi, Tagi, Api, Kitione, Matawalu, Seta and Mataele will battle the fiery Ikale Tahi, who no doubt will be backed by their vocal supporters and with the likes of Folau, Fekitoa and Piutau, are expected to play their hearts out. Yesterday’s front page captured Captain Wise Nayacalevu and the powerful words, ‘Pump it!’. My message to our warriors is stick to the game plan, keep it simple and use our lethal backs. Tovolea mada boys- pump it! I thank Fiji’s sports and trusted brand- The Fiji Times for keeping readers abreast with developments in the PNC! RAJNESH ISHWAR LINGAM Nadawa, Nasinu

USUALLY, love and freedom present a conundrum in personal relationships. It is quite a thing just to find ourselves in love with someone but quite another to be constrained by the same sentiment. We need to adjust and change for our loved ones for a relationship to become intimate and lasting. But for any relationship to work, there has to be a loss of personal autonomy only then it will be sustainable. Humans are most free and alive in a relationship of love. Unfortunately, when we oversimplify freedom and autonomy relationships suffer. SACHIDA NATH Nadi

ON the verandah in the setting sun, the three old men reminisced, of days long gone, lost in time and the mist. They regaled t heir tales and stories, of past shining glories, and many hidden follies. The stories more and more embellished, as each day it’s told, but they still avidly listened, to tales that never grow old. Then tears welled and glistened, as they remembered, their departed friends, as they whispered. Silence again reigned, as they closed their eyes and remembered each of them. EDWARD BLAKELOCK Pacific Harbour

FREQUENT breakdowns in the supply of power are affecting the day-to-day activities to a great extent. The inconvenience caused as a result of this is not simply explainable. Everyone gets affected when suddenly the power goes off without any warning. If your ailing infrastructure is to be blamed, you must take steps to fix them. The planned shutdown is no problem as people are informed in advance to be prepared for it. And natural forces are something we all understand, but, under normal circumstances, we don’t expect the power to be lost so frequently. So, we hope that things are improved upon to make our life less problematic. Thank you. SURESH CHAND Nadi

AMAZING that the FijiFirst party had decided to use The Fiji Times as a medium for their candidate application flyer (FT 29/6). ANTHONY SAHAI Auckland, NZ

TWO young primary school girls were refused entry into a bus. How much is the bus fare? What trauma did the girls go through? The bus driver could have used his discretion and allowed the children on the bus. It’s about humanity. ALLEN LOCKINGTON Kava Place, Lautoka

DID anyone count the number of phones beside our Attorney-General while pictured at the Fiji Institute of Accountant pre-budget consultation ( P2, FT 27/06). Must be the busiest man in Fiji and the Pacific. SAILOSI NAEWE Nausori

I WALKED the streets of Ba for the first time last Wednesday, including the bus stand and market. Next time I get the urge to go to India, I will just go to Ba. And so should all other Fijians who want to experience India. I think I may have just increased interest in local tourism to Ba. I am going to have to send the Ba Town Council an invoice soon! JAN NISSAR NSW, Australia