Letters to the Editor – Pulsating victory 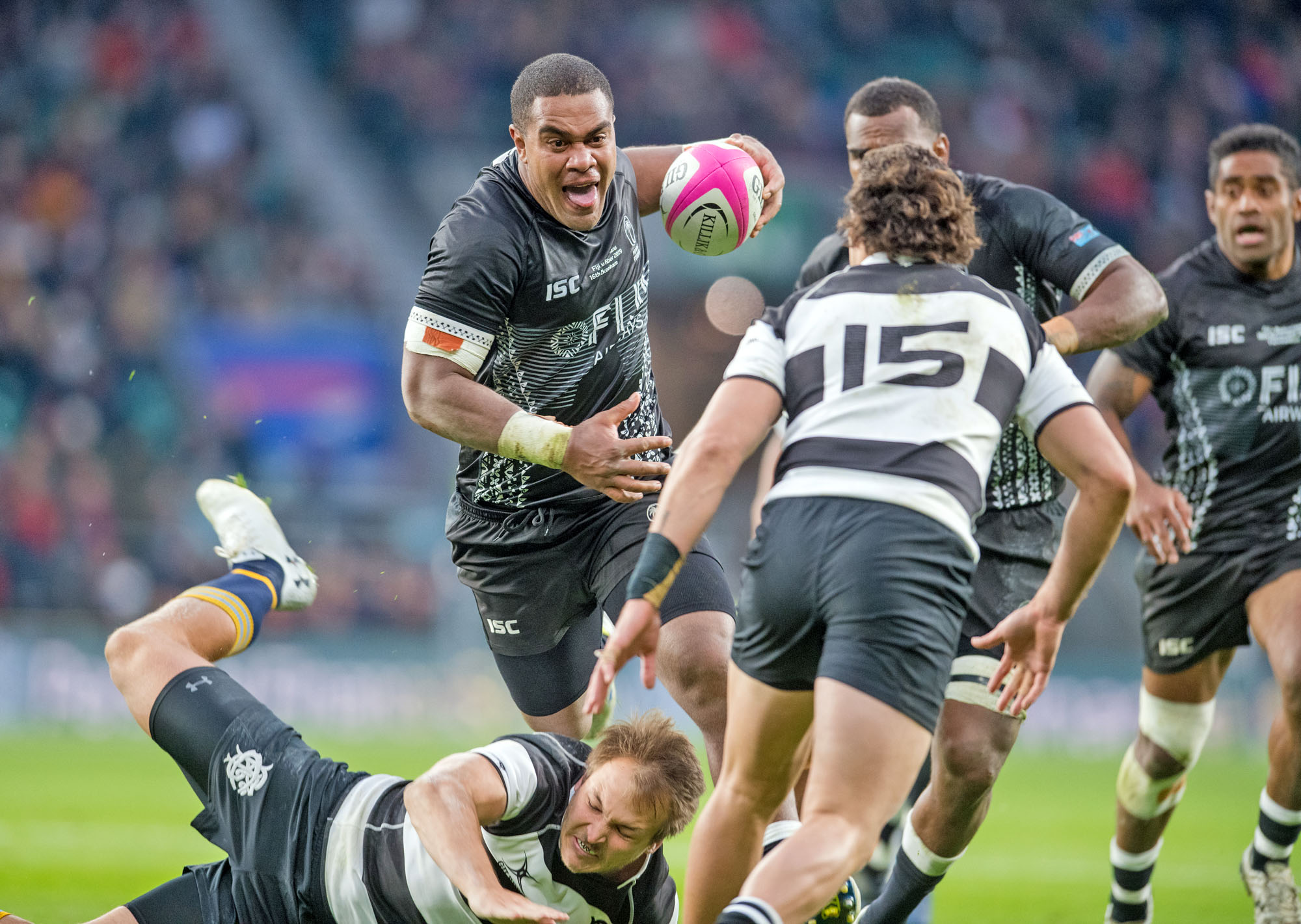 Man of the match ... Johnny Dyer on attack against the Barbarian defence during their Killik Cup match at Twickenham Stadium, London. Picture: SUPPLIED

THE pulsating victory over the Barbarians after 49 years has provided some relief for ardent Fijian fans after the depressing exit at the 2019 Rugby World Cup. The team, which comprised the next generation and some unlucky players who missed selection to Japan, produced a gutsy performance. Those who rose early on Sunday morning were not disappointed. This group showed the spirit of pulling on the Fijian jersey. The match was won by excellence across the park. As pointed by a World Rugby article, one of Fiji’s downfall in Japan was goalkicking. Ironically, goal-kicking won the match for Fiji at Twickenham. Contesting for possession at the breakdown and fierce defence were outstanding. Based on the performance of these emerging players, preparations for 2023 has begun. MOHAMMED IMRAZ JANIF Natabua, Lautoka

THE Flying Fijians proved me wrong with a thrilling display to outclass the Barbarians at Twickenham Stadium and come home with the Killik Cup and end a 49-year-old losing streak. The Babaas had a power-packed outfit and were coached by Eddie Jones. The side also boasted players from the RWC champions the Springboks, France, Scotland, Canada, Australia, Ireland, and Argentina and had two of the best forwards in Rory Best and ‘The Beast’. However, our attack was sublime and our defensive structure was explosive. Our veteran players Pat Osborne, Asaeli Tikoirotuma, Voka and Radrodro led the onslaught while the player of the match John Dyer, who was overlooked for RWC duties by McKee, caught the attention of the spectators. Hats off to the new kids Mawi, Teti Tela, Jiuta, Enele, Ikanivere, Reece, Matawalu, and Naqali for playing like warriors and I’m thankful to Drua coach Seruvakula for moulding these boys! The local boys have shown that they need to be treated like the overseas based players and it’s a pity that some at FRU have the mindset that the overseas based players are superior to our local flyers and I strongly feel that it is time to change that perception. Our local players played their hearts out, something that was missing from our RWC squad. Thank you boys for the much-awaited win! RAJNESH ISHWAR LINGAM] Balgovind Rd, Nadawa, Nasinu

WE need to ask why the use of meth has suddenly exploded. Is it cheaper than alcohol? Is it easily available? Can it be made at home? Alcohol has been a schurge for many, violence against women is one. Then we have drink-driving and the issue of sheer vandalism and thuggery. But beer, the common drink, is expensive. At almost $7 a bottle one bottle is not enough for many people. I heard that a “foil” of marijuana is $20 and can keep a person in a pleasant mood for the whole day. What about meth? How much does it cost? Why the sudden explosion? Was it always here in Fiji and some “people” were not doing their intelligence work properly? We have methylated spirits commonly know as “sprispra” for retail sale in half bottles. The methylated spirits law say that it’s illegal to sell it in less than 20 litre containers. And on purchase one has to write down name and address, and why one is purchasing it. Now we have other hard drugs. What happened? Did we think that it won’t come? With the movies and the internet the world has become smaller. And we have yachts coming to Fiji, I wonder how many simply come from foreign ports to our deserted islands drop off the stuff and move on. The local counterpart then goes and collects it. Well the parcels of cocaine found floating in the seas tells us much. If you thought that hard drugs wouldn’t come to a country that has so many religious denomination – you better think again. And like the poster that used to hang at the security officer when I still worked at Nadi Airport said … The biggest threat to security is when you think there is no threat. Drugs just like prostitution will never be eradicated. There is a market. ALLEN LOCKINGTON Kava Place, Lautoka

THE increase in methamphetamine arrests reported by the police’s Criminal Investigation Department (CID) Drug Unit officer in charge, Assistant Superintendent of Police Anare Masitabua (FT 17/11) comes as no surprise. ACP Masitabua stated that since 2013, the number of arrests in Fiji have increased more than 50 times. He also stated that Fiji was being used as a staging country where methamphetamine was cut and moved on for the Australian market. Manufacturers have penetrated and developed for themselves a fast-increasing marketplace in Fiji. These hard drug manufacturers, dealers, and distributors must face the full brunt of the law and serve maximum penalties. No mercy should be spared. Arrest should continue to increase tenfold and we the public need to play our part in reporting any suspicious dealings with this hard drug, methamphatamine. This explosion of meth ought to be followed through with a bigger explosion of arrests in order to nullify its existence. A consolidated effort from us all is required in this fight! SIMON HAZELMAN Rava Estate, Savusavu

THE 2019 FMF Chow Games successfully concluded in Suva over the weekend. This meet is definitely one of the biggest sporting events every year for the schoolchildren in primary division. In both the boys and girls division, the first, second and third positions went to Suva, Nadroga and Nadi respectively. These boys and girls deserve their district people’s thanks and appreciation. The hardworking and dedicated referees who oversaw the games deserve no less praise for being upfront. I am happy that the event passed without any reported mishaps. While some of the participating schools would have returned home by now, some may still be around. As usual, many parents had accompanied their children to make sure that they were kept safe during the games. For those who were not able to make it, they had to rely on teachers to take care of their boys and girls while being away from home. No parent and guardian
ever wants anything happening to their children when they are out on such missions. Let us thank all
the students, teachers, parents and supporters who played a part in making this year’s Chow Games
a memorable one. To the winners, please enjoy your spoils and keep training hard. To the losers, there is
always a next time. As the school holiday is just round the corner, please don’t completely get your eyes off the books and always pay attention towards your safety. Vinaka vakalevu. SURESH CHAND, Nadi

I BELIEVE it’s high time we have a new fire station to be somewhere at Nasese or Toorak. With the growing population and growing number of vehicles on our roads, we should be considering one new one. The current one at Walu Bay takes a lot of time to reach the city zone because of long traffic lines and streetlights that hinder their time in reaching the fire area fast. Looking at the recent fire at the police barracks, it will only take few minutes to reach there from a fire station based at Toorak or Nasese. The new fire station will be able to reach the city zone in minutes and even if there is a fire at Vatuwaqa, Raiwaqa and Nabua areas they will reach there early rather than driving all the way from Walu Bay TAGI VONOLAGI Nausori

Stream of the gods

WHEN I saw the headline Nubukalou stream of the gods, I just said, which gods. Funny that it is in the heart of Suva and is an eyesore. One way to keep that stream clean is to put up wire mesh up stream which will collect all the trash, especially the empty plastic bottles. Anyway, when I was still in Marist Brothers Suva St, the creak was clean. I suppose people were more responsible back then or there were no plastics around. But may I ask which gods does the steam or creek belong to, it’s such a duka levu creek. ALLEN LOCKINGTON Kava Place, Lautoka

FINALLY! At long last, someone in LTA shares what I have said many times. There are far too many careless, reckless, dangerous and “show off” drivers on our roads. Many are so arrogant. Many of our PSV drivers are not fit enough to be carrying paying passengers for their living. Many PSV drivers lack basic courtesy and respect. Improperly dressed drivers are not hard to come by. Smoking. Spitting out the window still happens. Besides, not many provisional drivers are displaying their “P” stickers and following laid down rules. Greater alertness by all law enforcement officers is necessary. Revoke provisional licence, if deemed necessary. Dirty taxis do not deserve to be paid in full for service provided. Owners/drivers must be held equally responsible and penalised accordingly. Most drivers simply do not get off, open boot/trunk door, assist full paying passengers with their shopping. Something must be done to improve this laziness and unprofessionalism. Needless tooting of horns, disturbing the peace, must cease with immediate effect. Thank you Mr Samuel Simpson, LTA chief executive officer. Our speeding fines are not a deterrent. Repeat speeding offences must call for fines to double. Speeding above 100 km per hour must call for minimum mandatory spot-fine of $200:00 plus 3 month suspension. No if and no but. Hit offenders where it hurts, in the pocket, and take them off our roads immediately. Court cases are waste of time, money and human resources. Go LTA go. RONNIE CHANG Martintar Nadi

IT has taken us 49 years to finally beat the Barbarians and it was done by our local boys. Boy, what a statement they have made! KOROI SEDUADUA Nasese, Suva

I BELIEVE any probe into allegation on police brutality should be carried out by an independent team to achieve desired results. DAN URAI Lautoka

CAN Water Authority of Fiji, Nadi, please explain why no prior notification is given for extremely low water pressure currently experienced in higher areas of Mountainview Martintar on Saturday afternoon November 16? This seems to be a habit with WAF-Nadi to lower water pressure without any due consideration and prior notification. Why can’t we be informed? Is there any cause for alarm? Shouldn’t we know? Such practice is annoyingly frustrating . RONNIE CHANG Martintar Nadi

NOW I know that there is a leave allocated to civil servants as travelling day leave. Hello! PITA SOROQALI Nadarivatu

IN a tweet by the official Fiji Parliament account, they referred to the Speaker as “…His Excellency, Sir Ratu Epeli Nailatikau…” Did the Speaker receive a knighthood from the Queen? If he did, I must pass on my congratulations! SAMUELA SAVU Farm Rd, Nakasi

IN 2023, before the final 31 Flying Fijians are selected to represent the nation in France, all eligible players should participate in matches against each other so that the best are taken. Not those based on names. I think the Barbarians match exposed the selection criteria. I will end here with one name, Patrick Osborne. MOHAMMED IMRAZ JANIF Natabua, Lautoka