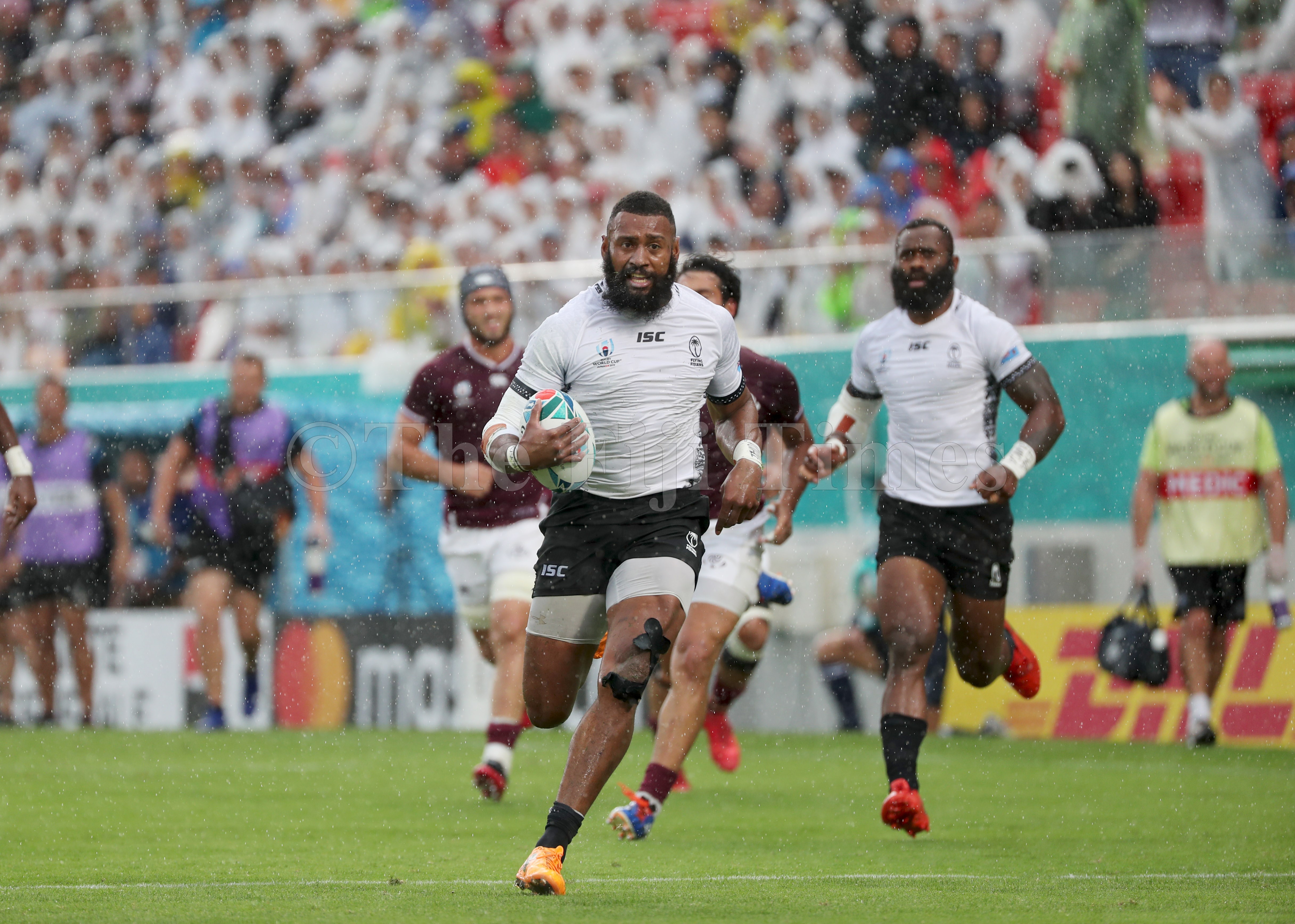 Waisea Nayacalevu dashes towards the tryline to score against Georgia during their pool match on Thursday. Picture: JOVESA NAISUA

What a splendid effort my “Flying Fijians’. Brilliant. One more to go though. Yesterday is won and done but Wednesday week is yours to win or lose. Train hard and rest easy. Calm your heart and quiet your mind and it will happen again. You all gave a fantastic show of confidence, character and skill. Drum it up a little more, just so you can deliver what the entire world is waiting for. Except Wales, I suppose. Now is the time to plan, strategise and brainstorm. Lean on your coaches for that little bit extra. Let them tell you where the weak links were. In your play or communication. Take measures so that the entire team is on the same page. One word, “Diligence”. Put it all together and amplify. Give praise to “the One” who guides you and gives you strength. God bless and Godspeed. Vuka Viti! MANOJ LAL PATEL Drasa Ave, Lautoka

The Flying Fijians have finally showed up at the Rugby World Cup 2019! It took them approximately 200 minutes for them to show their Japanese hosts, Fiji, Fijians worldwide and all Fijian rugby fans the potential, we already knew they had when they were first chosen to represent Fiji. Against a strong Georgian team, their game was not perfect by any means, but it arose in all Flying Fijian fans a new enthusiasm that the Uruguayan loss had all but extinguished. We might not reach the second round of the Rugby World Cup, but we were shown just a glimpse of Flying Fijians rugby at almost its best. We will take the win and thank the team for it. However, this Georgian win was mostly for the whole Flying Fijians team and management. It enables each player to reflect on the talent each of them possess as a Fijian. The spontaneity of letting loose a rugby ball with the whole team flying around the field supporting each other and never letting the game or ball drop. The joy seen on the players faces after all their tries was one of disbelief — was it really that easy? And for the management, their timely substitutions only further enhanced an already great team. The Flying Fijians displayed potential in their first game against the Maori All Blacks in Fiji. That same promise was again displayed against Georgia. With that knowledge and with the resolution shown by the Japanese against the Irish, our Flying Fijians have been given a glimpse of how any team can create their own luck. For 40 minutes only on Thursday afternoon, the Flying Fijian rugby players displayed just a percentage of what they are capable of, if their belief and commitment as one team was on show. Imagine, if that staunchness is displayed for a full 80 minutes! We only have one pool game left, and we the fans can only hope for a complete game of rugby from our Flying Fijians. With the Georgian game a blueprint for the Welsh, our Flying Fijians are on the cusp of showing the world complete running rugby at its absolute best! Toso Viti! Epeli Rabua Ragg Ave, Tamavua, Suva

A farmer is guaranteed $85/tonne for his cane. This is miles above the world market price. Additionally they get a 56 per cent reduction on fertilisers, a 55 per cent reduction on weedicides, cane access roads done up, transport subsidies, and a few other benefits. An expert in the industry assesses that the Government investment in the industry gives an overall cane “price” of $135/tonne. Surely this level of subsidy to a dead industry cannot continue for ever. If the worst eventuates it is the taxpayer and FNPF member who foots the bill in the end because Government guarantees the loans. Perhaps more Fijians will start to question what is going on, and when, if ever, it can get back to producing four million tonnes of cane/annum that it used to. Of course it was politics and coups which felled the industry, now it is cyclones and droughts. In the 40 odd years I have been here we have always had those. Allan Loosley Tavua

Next time we have a kava session, respirators will be given out. This is so we don’t breathe in the bagasse ashes being released from the FSC mill. Imagine about 10 men sitting in a circle around a tanoa all wearing respirators. It would be like a scene from a horror movie. Hahaha. Wise Muavono Balawa, Lautoka

I believe the Crimes Act of 2017 lists 250 different types of criminal offences classified under five major categories. These are reflected in the Crime Statistics Annual Reports produced by the Statistics Unit of the Fiji Police Force. Under one of the above mentioned five categories, namely, “Crimes Against the Person” are included: Murder; Attempted Murder; Manslaughter; Infanticide; Serious Assault; Act with intent to Cause Grievous Bodily Harm; Assault on Police; and Common Assault. Under another of the five categories, namely, “Crimes Against Public Morality” are included: Rape and Attempted Rape; Indecent Assault; Defilement; Incest; Sexual Assault; Abduction of a person under 18 years of age with intent to have carnal knowledge; and Other Crimes Against Public Morality. In 2019 I believe it would be difficult to find two people to agree on what constitutes “public morality”. However, while all the sexual offences listed under Crimes Against Public Morality” are indeed indisputably against public morality should they not, more appropriately, be re-classified as “Crimes Against the Person”? The prevalence of sexual offences in Fiji is all too apparent. The impact upon the victims concerned is immeasurable. I believe the public should indeed be offended by sexual offences but to categorise sexual offences as “against public morality” is I believe to fail to comprehend just how “personal” they are to the victim and to fail to recognise and respect the victim as a person. For this reason I believe the judiciary and the police need instead to start categorising all sexual offences not as offences “Against Public Morality” but rather what they are – offences “Against the Person”. Tim Howick-Smith Lami

The Fiji Human Rights and Anti-Discrimination Commission director has called for an independent investigation into the incident involving a 16-yearold boy who was allegedly interrogated by two men claiming to be from the Republic of Fiji Military Forces. Just recently, the director had stated the commission had nothing to do with the claim of assault against the Prime Minister because the matter was with the police. The matter of the 16-yearold is also with the police. The above are on record, not my opinion. Mohammed Imraz Janif Natabua, Lautoka

Guts, self-belief, teamwork, dogged unified determination and admirable second half laser focus saw our winless national 15s team handsomely defeat the big, burly, gutsy and bullocking Georgians 45-10, after slender half-time 7-3 lead. Our sincere heartiest congratulations to the Fiji Airways Flying Fijians for that awesome sterling second half performance. You believed. You delivered so beautifully. We thank you enormously. Thank you for restoring lost and badly-dented pride. Looking forward, in total positivity, we pray you all find newer strength, vigour, explosive sustained energies and endurance to thoroughly enjoy an excellent encounter against the might of Wales next Wednesday night. Please play with all guts, pride and free-flowing unique distinction, as if you are in the 2019 Rugby World Cup final. Spin your magic. We will not ask more of you. Your awesome victory over Georgia made yaqona taste sweeter. Tovole leqwa na lemamutou saravou. Mo vucukia na vuravura. Waqe vina. Waqe kaikai. Toso leqwa Viti. Toso. Tabu soro! Ronnie Chang Mountainview, Martintar, Nadi

The win by the Flying Fijians against Georgia was greeted with mixed emotions on my part, and witnessing the elation of our team was taken in with a bitter pill. Our team expressed themselves and played to the potential we know they are capable of, but their campaign was over even before the first whistle at Hanazono Stadium. Relying on other results to go your way is putting your destiny which you are to forge yourself in someone else’s hands. Ben Ryan earlier stated his disappointment in the reactions of the public towards our coach and some of the team members after the loss to Uruguay but I believe someone has to shoulder the responsibility. In a game of cards you have to use to the fullest the hand you are dealt. The outcome of the game depends on the strategy in which you manage your resources to achieve the desired conclusion. The two most influential individuals in our campaign are the coach and the captain. Again, like in a game of cards, I alluded to earlier, when your partner plays a card, you adjust by using your hand to complement that play. Some of the lyrics from the song by Kenny Rodgers “The Gambler” has a lot of lessons that we could use in situations we are faced with. “Every gambler knows that the secret to surviving, is knowing what to throw away and what to keep” and the biggest lesson I believe is “You never count your money, when sitting at the table. There will be time enough for counting, when the dealings done”. Tuimasi Lote Masitabua Nauluvatu, Suva

Christopher Pryde says “Section 274 of the Crimes Act states that a person commits a summary offence if he or she unlawfully assaults a person and can be sentenced to one year imprisonment” (FT/4/10/19). Is this law applicable only to teachers? Dan Urai Lautoka

FSC management should go into full-time electricity generation. You already got lots and lots of fuel. You will need a few more steam boilers and steam turbines and generators. If you need assistance you can always ask Hasmukh Patel. For power generation you need less equipment than you need for making sugar. Sukha Singh Labasa

US House speaker Nancy Pelosi said “No one is above the law and the president will be held accountable” (Seven News 4/10). That is how the rules are applied in a true democracy. Without fear or favour regardless of one’s status. Rajend Naidu Sydney, Australia

Lucky our Flying Fijians beat the Georgians on Thursday. I was worried the flights would have been delayed after my Tovats at CAAF compound had tackled a plane had we lost. Wise Muavono Balawa, Lautoka

With the way things have been going, I wonder if we are discouraging people from becoming teachers? Allen Lockington Kava Place, Waiyavi, Lautoka

Who is responsible for clearing all the piles of litter left behind after festivals? The organisers, stall owners, contractors or town/city councils? In Lautoka, after the Farmers Carnival awareness about littering, what changed when the Sugar Festival ended? I understand that closed-circuit television (CCTV) cameras were used during the Sugar Festival. Was that used to curb littering as well? Mohammed Imraz Janif Natabua, Lautoka

“We are running our schools like dictators and our children have a lot of fear” (FT/4/10/19). The Education Ministry deputy secretary hits the nail on the head. Dan Urai Lautoka