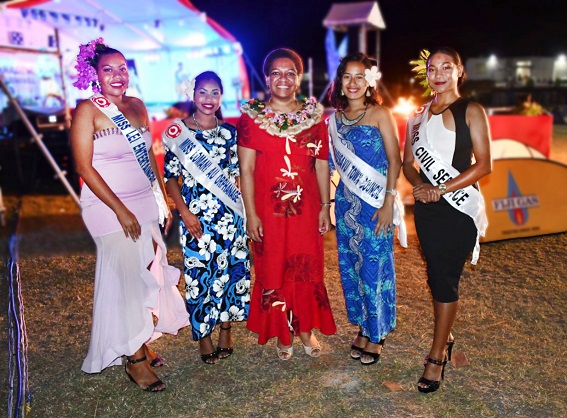 Minister for Women Mereseini Vuniwaqa with the contestants in Savusavu. Picture SERAFINA SILAITOGA

That beautiful bula smile from our honourable Minister for Women, Children and Poverty Alleviation with the contestants of the Vodafone Hidden Paradise Savusavu Carnival stood out in yesterday’s The Fiji Times. It’s a delight that our tourism town has organised a carnival with the theme, “Protect the ocean and you protect yourself”. Savusavu is surrounded by the ocean and the theme is a timely reminder to the local citizens and foreign investors about the need to protect the ocean and I hope that a concerted effort will be taken to protect the ocean. I grew up in Savusavu and I am aware of the important role the ocean plays in the livelihood of the citizens of Savusavu. I’m happy that my town has shown a lot of progress. As a former resident of Savusavu, I thank the carnival committee for organising the carnival and I wish the four contestants all the best for the crowning on Saturday! Rajnesh Ishwar Lingam Nadawa, Nasinu

Now that normal service has been restored, we can leave behind the Los Teros blemish. The Lelos clash has shown what this team can do with ball in hand. Then why aimless kicking is still being practised? In rugby, the ball should be kicked on two occasions in general play. Either out of the field with no chance of a quick throw or there is a chance of winning it back. The team needs to improve in receiving kick-offs. Attack in two’s or three’s to provide thrust for the ball carrier and dangers of getting isolated is reduced. Tackle and hold on to the players because just bumping them gives away easy yards. Against the Dragons, there should not be any long passes from the ruck base because the Welsh halfback has pace and he runs across the receiver for intercepts. During lineouts, the Welsh hooker tends to inch his way towards his own players. I think Lomani will need to keep an eye on this. The Welsh have worldclass kickers and unnecessary penalties will cost the match. Most importantly, the team has to turn up after six days with an attitude to play. Mohammed Imraz Janif Natabua, Lautoka

If mismanagement was the problem for the FSC loss, who was responsible? Was the person responsible taken to task? So much is at stake for one time economic backbone of Fiji. Narayan Reddy Lautoka

Yes, it’s Pinktober: Breast Cancer Awareness Month, so in the spirit of awareness raising, I’d like to make you all a little more aware of what awareness campaigns are actually making you aware of. Breast cancer was a disease spoken about behind closed doors, not something one would acknowledge in public. Men and women had little support, and there was little understanding or acknowledgement of the emotional ramifications of suffering from the disease, or the emotional trauma of losing one or both breasts. Many women suffered in silence with a deadly disease they considered shameful. Men and women today feel more empowered to take control of their health, and not ashamed to seek help. And, to this day, these organisations dedicated to breast cancer awareness give women with breast cancer (and their loved ones) a feeling of community and support. These are all undeniably excellent developments that have greatly benefited women with breast cancer. But for now, let’s put the pinkwashing aside, and focus on the goals of Breast Cancer Awareness Month. Give generously with a cheerful heart to support worthy cause. Eat healthy, exercise regularly and stay healthy. Vinaka. Neelz Singh Lami

A letter writer says the FijiFirst party leader and his government were mandated through the votes of majority of right thinking Fijians (FT/3/10/19). I disagree. I believe right thinking Fiijians are still questioning how 0.2 per cent majority equates to two seats in parliament. Dan Urai Lautoka

Taking into consideration the amount of rubbish after the Sugar Festival makes one wonder where civic pride is? (FT 01/10) Maybe charging the stall owners would make some difference. The clean up initiative is something that has to come from within and not through imposed terms. Even at the cinemas one can see how recklessly people leave their rubbish on the seats after the movie ends. There is a rubbish bin at the bottom of stairs. How hard is it to simply do the right thing? Yes we have workers allocated to do the job of cleaning and picking up rubbish but having the civic pride will certainly help. The rubbish bins are not allocated at various places for decorations. Let’s make use of it. Let’s not follow what the majority are doing recklessly. It is a not a good thing that someone else has to pick up our rubbish. Have some empathy. Those are our rubbish strewn around in our beloved nation. IRTI PATEL, Lautoka

I believe Fiji FA president Rajesh Patel was quick to offer incentives for the Vodafone Fiji under-23 team to win the semi-final against New Zealand in the Oceania Football Confederation qualifying tournament at Churchill Park. What a pathetic incentive, the national team got a 6-1 drubbing at the hands of the Kiwis. Fiji, being the defending champion wanted to emulate the feat of 2015 to qualify for the 2020 Tokyo, Japan Olympics. The writing was already on the wall for the team after losing to Vanuatu in pool play and finishing as runners-up. The 6-1 hiding was compounded with an own goal and a red card even after playing all its three pool matches at Churchill Park. Mr Patel, I suggest that you divert the incentives of your losing team towards the International Day of Older Persons celebrations that will make you and Fiji FA blessed. The national team qualified in 2015 only after the NZ team was disqualified. You keep harping about grassroots development but nothing is happening to boost national success in the world scene. There were so many critics when the Fiji Airways Flying Fijians lost to Uruguay, the reality is that both the 7s and 15s codes are playing in the world cup consistently every four years. When will our national football team be part of the world cup? For the time being, I keep saying, only in our dreams. Now that we are bundled out of the 2020 Olympics qualifiers, the focus will now quickly shift to the Courts IDC in Nadi next week. This is what I say, “soccer development at it’s worse”. Raymond Singh Lautoka

I refer to the picture of the Suva wharf (FT 02/10, Page 14) and it brought back memories of the ’70s and ’80s when entry was not restricted and the Suva wharf was a favourite place to be for young kids. Around this time, we normally welcome or farewell cruise liners with the sound of the police or army bands displaying their marching skills and sweet sound of island songs. These days, security measures are so tight and no unauthorised person can enter the wharf area. Closer to home, Auckland wharf, especially the passenger terminal area is a place to be on a Saturday or Sunday afternoon when it comes alive with all sorts of entertainment and recreational activities for the public with lots of great food. You can walk from one end of the wharf to the other with closer view of ships of all sizes and types. I can only hope we have a separate wharf to handle cargoes and dangerous goods, maybe the government would consider constructing one along the Lami foreshore near the harbour entrance, and turn the present Suva wharf into something similar to Auckland wharf’s passenger terminal. Kids of today are missing a lot, one is a trip down to the wharf. Ilaitia Bose Samabula, Suva

The All Blacks had named a pretty strong line-up for the battle against Canada and came out firing (63-0). The likes of Moli, Coltman, Ta’avao, Tuipulotu, brothers Scott, Beauden and Jordie Barrett, Frizell, Todd, Read, Perenara, Mo’unga, Ioane, SBW, Goodhue, Taylor, Tu’ungafasi, Laulala, Savea, Whitelock, Weber, Crotty and Ben Smith helped the defending champions get the bonus point win and remain in contention to top pool B and gear up to meet the runner-up from pool A, which could be Ireland, Scotland or Japan, depending on the results of the final group of matches. Once again congratulations to the All Blacks! Looking forward to another bonus point win against Namibia! Rajnesh Ishwar Lingam Nadawa, Nasinu

Thank you Lautoka City Council (LCC) for patching the bus bay at Lautoka bus station with cement. I thought the CEO was quoted saying the bus bay will be resealed. This is about the 10th time LCC has patched the area. It just shows the workmanship. I believe that was the reason the people were calling for municipal elections. I can just imagine the cost of all the patch ups. Amol Kumar Lautoka

I just finished watching the All Blacks v Canada game and suddenly a thought hit me in the head. I would love to see the whole of Cabinet ride and avoid the poles. Hey I’m just asking for our climate change champion to lead the way. I can just see him ride past the pole. Hey I’m joking here. Allen Lockington Kava Place, Waiyavi, Lautoka

The Fiji Sugar Coperation loss is because of the mismanagement of the $US55m ($F120.72m) Exim Bank of India loan years ago says the chairman Vishnu Mohan. Was any action taken on those who were responsible for this mismanagement? Sukha Singh Labasa

I read an article online last week of an amazing gesture by the Sigatoka Town Council, Health Ministry and Sigatoka police, and Oneness Pentecostal Church on their efforts to perform a proper burial for an elderly citizen who had been roaming Sigatoka Town for years. The deceased had been lying in the Lautoka morgue since April this year, which prompted the health officials to contact the mentioned authorities. While most discussions were based around the RWC, these stakeholders worked silently and managed to give the man a proper burial. To all of you that assisted, God bless you all. Koroi Seduadua Nasese, Suva