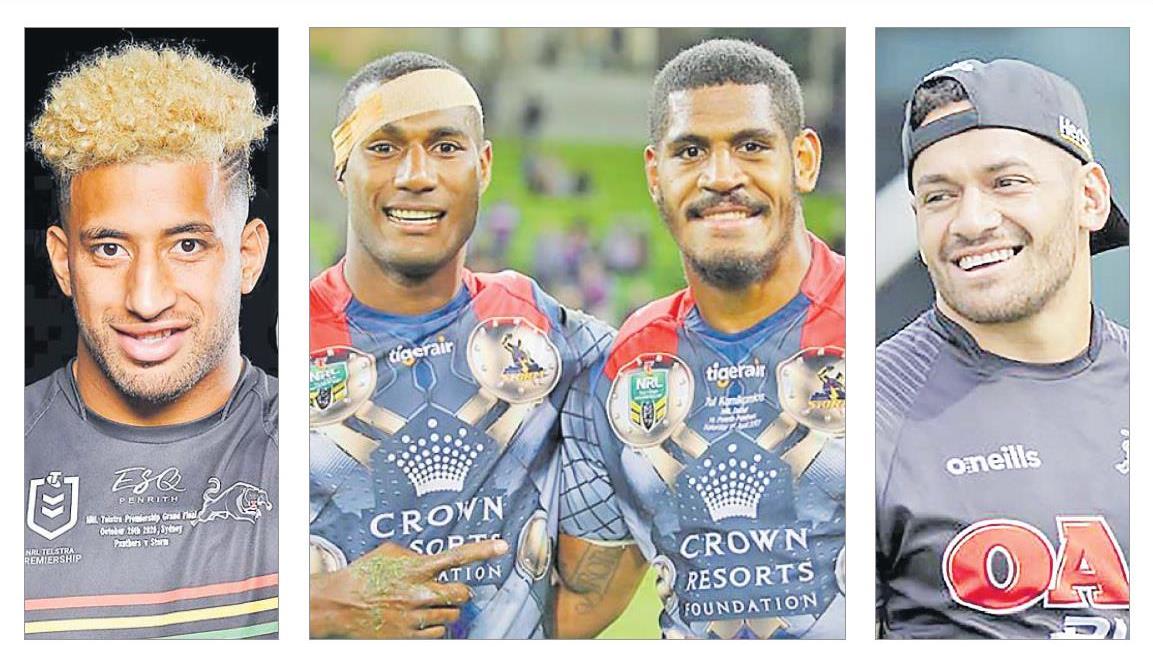 As NRL fans prepare for the grand showdown, emotions will be high here at home as four of our boys will be featuring for the Storm and Panthers. Tui Kamikamica and Suliasi Vunivalu will don the Storm’s jumper while Api Koroisau and Viliame Kikau will play for the Panthers. The Fiji Times has been adding flavour to the final by sharing stories and reactions from close family members and loved ones. Friday’s The Fiji Times shed light on Kikau’s family and yesterday’s newspaper shared how Tui’s mother Nanise Kamikamica, who is a schoolteacher and staunch unionist, felt as her son was ready to play in the NRL final. My friend Nanise, who is her son’s number one fan, counts herself lucky as she is blessed with a caring and loving son who is living his dream of becoming an international rugby league star and just like Suli’s uncles and family, the Kamikamica family will be decorating their home purple. Prior to the final, Nani reminded Tui to have trust in himself. Today’s final will thrill those in Australia and here at home. Fireworks will erupt. My best wishes to our Fijian boys who will be playing the game of their lives! RAJNESH ISHWAR LINGAM, Nadawa, Nasinu

In the Farebrother challenge against holders Namosi, I am totally disgusted and ashamed the Nadi halfback copped a red card for stomping. How shameful. Simply disgusting. So unnecessary. Discipline is still a major problem among some players. Some just cannot learn. Ronnie Chang Martintar, Nadi

I believe three of the excellent opinion articles in Saturday’s The Fiji Times (24th) make it clear that our Government lacks transparency in its financial relationships and responsibilities for the institutions that are vital for the education of our young people. This is evidently already impacting on the ability of our country to develop and prosper over the next 50 years, and to maintain our regional position as a leader. The honourable Mahendra Chaudhry also included in his article the dealings of Government over market facilities for some of our rural women. These are not new stories, but the concern to many of us is that nothing is changing for the better. All the many nice words about opportunities for all and no one being left behind sound very hollow and meaningless. There is an urgent need for our honourable Prime Minister to make some radical changes for the better. Tessa Mackenzie Suva

According to the current national soccer team coach, in the final of the second tournament, “the players played the way he wanted” and he enjoyed the “fast paced football”. He has also noted (since he came here) “lift in intensity in both divisions”, “progress”, and “a lot of improvement in the style of play by the teams”. Almost three weeks ago, I had enquired about the styles of soccer played by each of the teams. As none came forth, I had given up with the conclusion that no one had any idea until I read the national soccer team coach’s observations. Flemming Serritslev, as per your observations and expertise, could you share with the nation the style of play adopted by the teams? Mohammed Imraz Janif Natabua, Lautoka

A day that Americans will live in oblivious infamy this year, is on November 3. It’s a day with quite a number of coincidences, that will definitely be remembered, a likely blue moon and two asteroids that will make close calls, apart from the Trump and Biden showdown, that just might end up like a brawl, the results could be a real game-changer, either way, to become the new normal for Americans, after inauguration day. The first debate was a real shamble that ended in tatters, the second cancelled and the third was way better, it’s up to the decision-makers and those directly affected, to save and rebuild lives and not only for those that mattered. It should provide a number of life lessons, that we can all learn from, so that we can all move forward together, from the very next morn, Trump will most likely overhaul his close and rival resident, to begin another term as America’s COVID-19 -free, new president. Edward Blakelock Admiral Circle, Pacific Harbour

I would like to ask the Minister for Health and the Ministry of Health what is taking so long to open the newly-constructed Ba Hospital. Did someone miss out on their due diligence or did Aspen medical pull out because of COVID. Because of this the old Ba Mission Hospital has not being upgraded a long time reason being the new hospital. Ba Mission Hospital’s condition has deteriorated over the years because of lack of maintenance and some wards are being painted by NGOs or private organisations. Krishneel Vyas Nailaga, Ba