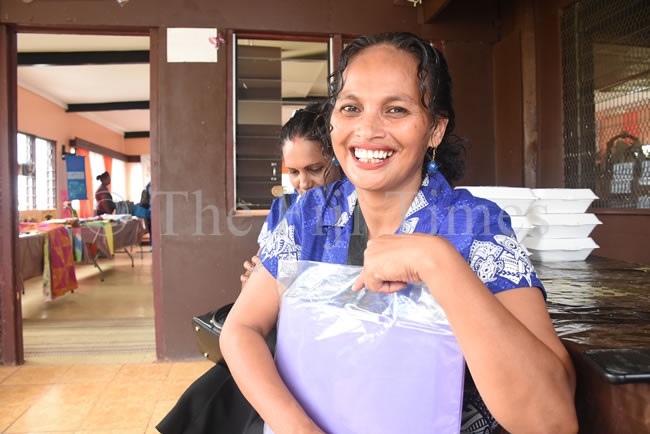 Once again, the People column stood out! Classed as one of my favourite columns after the letters to the editor page, yesterday’s story by Repeka Nasiko on Alumita Rakidiva titled “Sharing the truth” was a worthwhile read. Hats off to Alumita, who is a survivor of domestic violence, for publicly sharing the ordeal that she went through and the mother of seven is today an advocate for women who have been through domestic violence encouraging them to turn their situation around by getting help! Alumita’s story and the story of Seini Naikilakila titled “Cancer is like a death sentence” by the evergreen Viliame Ravai (FT: 21/10) moved readers. Seini, via the Pinktober awareness page, shared how she received the news of being diagnosed with cervical cancer. She described that her emotions that day was a “mental blackout”. Seini revealed that through God’s intervention she had witnessed a change. I commend The Fiji Times journalists for such stories that make us ponder about life. I also commend the newspaper for its dedication and commitment in creating awareness on childhood cancer and cancer in women. The Pinktober awareness page runs emotional and heart-touching stories. Vinaka vakalevu The Fiji Times! Rajnesh Ishwar Lingam Nadawa, Nasinu

When I read noqu weka Paul Geraghty’s letter all I said was “genius”. And I had a good laugh, because it is. May I add to that — we still ask the shopkeeper for a quarter pound, half pound or one pound butter. And plastic containers are still called gallons, not litres. I still remember body measurements (especially of women) 38″, 24″, 36″ inches. In centimetres it would be — 96, 70, 91. “That makes me pretty big, eh?” said a Hollywood actress. So, Moses Fong, where do you live, at 10 miles or 16 kilometres? Allen Lockington Kava Place, Lautoka

Around the world, researchers are working tirelessly to develop a safe and effective coronavirus vaccine. We acknowledge and thank them for their efforts. More than 41 million people worldwide are currently infected with the disease and the number is increasing day by day. The researchers are hopeful of producing the vaccine by end of this year or early 2021, as the released report suggests. It is sad to say but it is a fact that unless and until a vaccine is found the virus will not stop spreading and killing people. Fiji has quite ably handled the situation thus far and it is hoped that we stay focused on our health and hygiene practices at all times. Let us also maintain social distancing as far as practically possible. Not now but should we see our cases rising then we might have to put stricter guidelines on social distancing. It is relaxed at the moment. We can’t afford to relax when our health and life is at stake. Not a bit. Remember, prevention is better than cure. Let’s hope the vaccine is delivered as anticipated. Suresh Chand Nadi

When we analyse among other things the proposed $5 cancellation and $2 stoppage fees associated with the LTA’s Vodo mobile phone app for taxis, the only change to the present system appears to be basically, additional costs to taxi operators as providers and the public as users. And of course, I believe, tax revenue for government. I believe it may, therefore, not be the opportune time to introduce these changes with all the present hardship imposed by the COVID-19 pandemic. In the event that this may be implemented, could the LTA undertake a full cost-benefit analysis and put in place a one to two-year transition period to iron out all potential loopholes before enforcing it? E-ticketing is a case in point which comes to mind. Emosi Balei Kini St, Suva

I write to express my disgust at the frustration one faces while visiting the CWM Hospital. The parking area is jam-packed to capacity at any time of the day. If you park illegally you are bound to be booked by LTA (Land Transport Authority) and pay a heavy fine. Extension and Brown streets have become very busy places for a number of reasons. The demand for medical services has increased substantially at CWMH and the Pacific Eye Institute in Brown St. Also the location of Fiji School of Medicine next to CWMH has increased traffic and people mobility. Hence the parking problem. In my view it is the responsibility of CWMH to ensure that there is ample parking space for the visitors (clients) to the hospital. LTA officers are doing their job booking illegal parking. However, is it fair on the vehicle owners when parking spaces are not provided? This is a moral question. I sincerely hope that the Ministry of Health will look into this matter with a sense of urgency. Dewan Chand Namadi Heights, Suva

There are a few questions hanging over the decision by the Fiji Elections Office and its voter survey project that are begging to be asked. The public is informed by the Fiji Elections Office that at this time, we need to be ‘innovative’ and to ‘spend in prudence’. How much will it cost to administer the survey? I believe a quick calculation of the costs include recruiting 300 staff members, each receiving $100 plus $20 internet allowance (= $36,000) as well as the cost of designing an ‘app’ to carry out the survey; giveaway merchandise that has been promoted; and so on. I guess all of this must come from our pockets, the taxpayers? Then there is the question of whose initiative it was? When was this project first conceived? Was there any consultation carried out in the planning of this project or something just sprung on us? Was any consideration given to professional ethics in conducting a survey, inclusivity of respondents and confidentiality of responses; integrity of those conducting the survey; and degree of randomness in conducting a public survey? We are informed the survey is targeting those who have already obtained their voter card; it does not include first time voters who are yet to obtain their cards. We are assured by the Supervisor of Elections, Mohammed Saneem that the survey will be ‘apolitical’. Finally, what kind of survey is it that gives away merchandise at the end? It sounds all pretty ‘Mickey/Minnie Mouse’ to me. Julie Sutherland Tamavua, Suva

This week saw the UEFA Champions League return to action just two months after last season’s final was played. Manchester United thundered its way back after an inspiring 2-1 win away from home against Paris Saint Germain. Bruno Fernandes captained the Red Devils in one of their best performances in years while Marcus Rashford once again turned out to be the villain for PSG after a bolstering strike from outside the box, late in the game. Meanwhile, in other fixtures, a major upset was created when minnows Shaktar Donetsk defeated 13-time champions Real Madrid at their home ground, sending the footballing world into shock. The Ukrainian side were without 10 of their first-team players who tested positive for COVID-19. Unbelievable! Whereas rivals Barcelona thrashed first-timers Ferencvaros 5-1. A game which saw a galore of goals from teenagers Pedri and Ansu Fati and big names such as Coutinho, Dembele and club legend Lionel Messi, who has not quite found his rhythm this season and is yet to score a goal from open play. In the much awaited clash, defending champions Bayern Munich humiliated Spanish outfit Atletico Madrid 4-0. The best attack in the world took on the best defence in Europe and yet outscored them by a fine margin. Kingsley Coman, who scored the winner goal in the final last season, proved to be the hero once again after scoring a brace while midfielders Tolliso and Leon Goretzka scored one a piece in a devastating performance. All this action from the best games of just the first round of matches, imagine what the season will bring out for the fans to enjoy! Raynav Chand Nakasi

One mobile service provider’s data bundle offer needs a bit of clarification. If say you buy 4GB data for $6.99 on a weekly plan the unused data at the end of the week automatically vanishes. But wait a minute, I have already paid for that data. Can someone explain? VISHNU DEO SHARMA Nakasi

Having recently frequented Laucala Beach Estate lately, one notes that the traffic on Ratu Dovi Rd is a concern. The speeding of vehicles is a frequent occurrence and poses safety issues for both pedestrians and vehicles. One hopes that authorities frequent that area. If drivers continue with this trend, it probably won’t be long before a mishap occurs. All in all, a safe and blessed weekend. Floyd Robinson Toorak, Suva

Around two years away from the next general elections, where is the “noise” from those who intend to be candidates but are currently out of Parliament? If they are in their comfort zones now, 2022 could represent “late arrival”. Mohammed Imraz Janif Natabua, Lautoka

TO the person who posted derogatory comments about MP Lenora Qereqeretabua on Facebook, I say shame on you. SELWA NANDAN Lautoka

Can the Babasiga Lions repeat their IDC performance and beat Lautoka on their home turf or will Lautoka spoil their party? Pranil Ram Votualevu, Nadi

Both SODELPA and NFP have been subjected to rigorous scrutiny more than the rest of political parties in the country by the Supervisor of Elections. I wondered why it was like this. Suresh Chand Nadi

For Serevi to say that Jerry Tuwai is a greater player than himself makes Serevi even greater. Even up until now, no one can say for sure who was the greatest heavyweight boxing champ of all times. But for me, Rocky Marciano remains number one, Mohammad Ali number two and Mike Tyson number three. By the way, Rocky Marciano was one of the shortest and lightest heavyweight champions. Sukha Singh Labasa