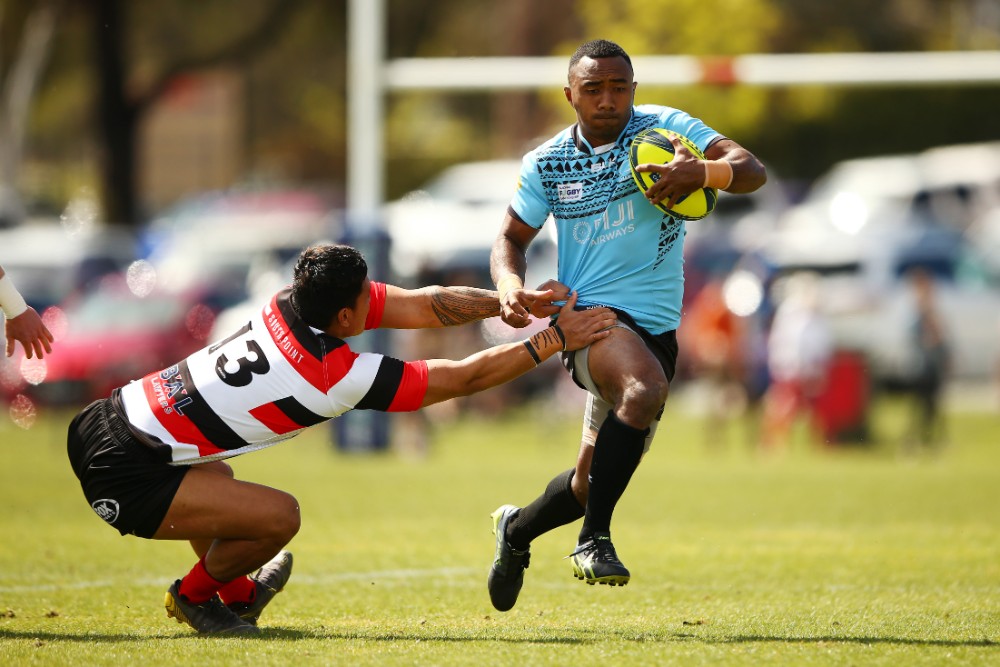 Seru Vularika of the Fiji Drua attacks against the Vikings during their semi-fi nal clash in Australia. The Vikings won 28-27. Picture: RUGBY.COM.AU

IT was disappointing to note that our Fijian Drua conceded defeat in the last moments of play. Our boys held a (22-0) lead at the break but failed to maintain that lead as the hosts came back firing. We then scored an unconverted try and took the lead right up to the 80th minute but then lapse of concentration, some silly decisions, and missed tackles cost our boys a place in the final which will be played between the Vikings and Western Force. Isa, we have been dethroned! Some tough days for Fiji rugby — the Fijiana returned home after a disastrous outing in Glendale, our rugby league nines team lost to Samoa, Tonga and the Cook Islands and our Flying Fijians continue to slip on the latest ranking. I feel I’m realising what’s amiss but I’d rather keep it to myself. These days times are hard! RAJNESH ISHWAR LINGAM, Nadawa, Nasinu

IT would do our society well not to breed the seed of dependency in them. People become lazy. They lose their dignity. Even during the general elections, don’t give out things free, tell the people to work for it and the Government will meet them halfway in village projects and the like. Just look at free education, do the parents care? I don’t know. Anyway, I hope parents are also doing their part and checking homework and asking what the child did in school. One day in the future a parent will ask a child what he did in school and the reply will be, “Oh, we did school work in the morning and after 2pm we had a tight mix with the teachers.” ALLEN LOCKINGTON Lautoka

THE reluctance shown by a number of EU member countries to firm up on their individual obligations to reduce global warming in compliance with the 2015 Paris Accord on Climate Change, (FT 20/10), appear to me to be quite understandable and obvious. We are told that these relatively poorer member nations in Eastern Europe are heavily reliant on fossil fuel, like coal, for their energy needs. Given the state of their economies, they will obviously find it difficult to make the transition to the utilisation of clean and green environmentally-friendly energy sources as part of the obligations required by COPs. Possible solutions such as obtaining aid packages from multilateral aid agencies, may only just add to the mounting debt burdens these countries are already facing. One can fully appreciate their current reluctance. This all just shows how difficult it always is for some countries to meet globally-derived commitments such as those for climate change, while facing their own immediate national problems at home. This is even despite the fact that the effects of climate change transcends all other national issues being faced by any country today. One can just see the frustrations and disappointments that will probably arise in the upcoming COP in Chile in December. I believe we will most likely still be far from the intended goals in terms of implementing national commitments. We as recipient countries in the climate crisis, just have to face the reality and come up with our own adaptive solutions to mitigate its negative impact. There appears to be no other way around this scenario for us. It’s getting too late in the day anyway to keep on pushing against a brick wall. EDWARD BLAKELOCK Pacific Harbour

THE recent meetings of the World Bank and IMF painted a gloomy picture of the global economy, downgrading the growth to 3 per cent, with a possible downturn of around 0.28 per cent by as early as 2020. We understand many governments are aware of the implications of these on their own economies, and are advising on measures and implications to their people and countries. Can we in Fiji be advised openly and truthfully what the implications are for us and what actions Government is taking to mediate these effects. I note that it has become all too common for our minsters to divert into the usual lecture on climate change, which we are aware of, without addressing the actual issues relating to our economic environment. I cannot disagree with Mr Aiyaz Sayed-Khaiyum when he recently invoked the issues of the inter-dependence of climate resiliency and economic resiliency. If he as Minister for Economy can tell us how we can become economically resilient, we would surely be better placed to deal with climate change impacts. It is common sense to appreciate that if we can afford better houses, facilities, ie the richer we are, the greater our ability to survive in the face of such disasters. MANI CHAND, Suva

IF Eddie Jones is showing interest in coaching our Flying Fijians team, then I believe it is a no brainer; grab him with all we have! Jones has proven himself as an intelligent, shrewd coach. Besides several clubs, Jones has coached Australia, South Africa (Assistant), Japan, and now England. He took Australia to the Rugby World Cup final in 2003, he was assistant coach for South Africa when they won the 2007 Rugby World Cup, he coached Japan leading them into the 2015 Rugby World Cup and their upset win over the Springboks, and judging by the way England is currently performing, they could make this year’s RWC Final. Jones can clearly see the potential and opportunities to be explored with Fiji. He knows he can be successful. I believe Jones is a better, smarter and experienced coach now more than ever before and he and Fiji will make a great combination. We need change and this is a perfect one! Jones for 2023! SIMON HAZELMAN Rava Estate, Savusavu

ENGLAND, New Zealand, Wales and South Africa stormed into the semis of the RWC. Moments after England had strangled Australia, NZ found their rhythm and demolished Ireland. On Sunday night the battles were close, Wales edged France (20-19) while the Springboks beat the Brave Blossoms (26-3) to become the only pool runner-up from the RWC pool to make the semis as all other semi-finalists are pool winners. NZ fans made plenty noise as the superpowers battled Ireland, who faced the unenviable task of trying to end NZ’s 12-year unbeaten run at RWC’s when they met as the ABs last lost a RWC match during the 2007 RWC against France. Ireland has never reached the semis of the RWC, having fallen at this stage on no fewer than six occasions. Irish captain Rory Best paid tribute to NZ who he described as fantastic. Indeed the ABs were outstanding crossing over seven times, albeit in the face of fairly feeble resistance from Ireland. Having put in arguably their best performance since the last RWC, NZ swat Ireland aside with a minimum of fuss and the “Men in Black” were as outstanding as the Irish were inept. As an ardent ABs fan, hats off to Crusaders coach Scott Robertson for his efforts in nurturing the Crusaders dynamites – Moody, Taylor, Whitelock, Read, Mo’unga, Reece, Bridge, Goodhue, and Todd as they played a vital role in NZ’s win. I was impressed with NZ’s win as the Irish headed to Japan as the top ranked side and I’m glad that the ABs did not let their fans down. My best wishes to the darlings of rugby for the semis against the “Roses” and I must say that Sevu Reece has left a mark at the RWC and proved critics wrong. In my letter titled “2019 RWC heats up” in The Fiji Times (05/10) I had picked England versus NZ and Wales versus South Africa semis and NZ versus South Africa final and I stand by my prediction. Go All Blacks, continue to rock! RAJNESH ISHWAR LINGAM Nadawa, Nasinu

I QUOTE Summer Sanders, “To be a champion, I think you have to see the big picture. It’s not about winning and losing; it’s about every day hard work and about thriving on a challenge. It’s about embracing the pain that you’ll experience at the end of a race and not being afraid.” My best wishes to our Year 10 students for the English paper and the rest of the exams. Do your best dear children. RAJNESH ISHWAR LINGAM Nadawa, Nasinu

COULD someone from the Australian embassy tell me why people travelling to Australia are only allowed to take 2kg kava to Australia and now they can take 4kg. Is there something wrong with the kava? SUKHA SINGH Labasa

IF the Police Commissioner says that this daily is the “wrong paper” and wishes not to associate himself with its esteemed reporters, then that’s his prerogative and freedom of choice and association. Let’s move on with more important matters rather than squabbling over this right paper or wrong paper issue please. BEN KUSH Canberra, Australia

AT a time when the flora and fauna on this planet are becoming endangered or extinct, the 2019 Rugby World Cup has discretely campaigned for their survival. Believe it or not, almost 90 per cent of the participating teams have their national emblems plant or animal related. MOHAMMED IMRAZ JANIF Natabua, Lautoka

A LETTER writer has queried why did the DPP return the file to the police. I believe it’s to file for future reference. DAN URAI Lautoka