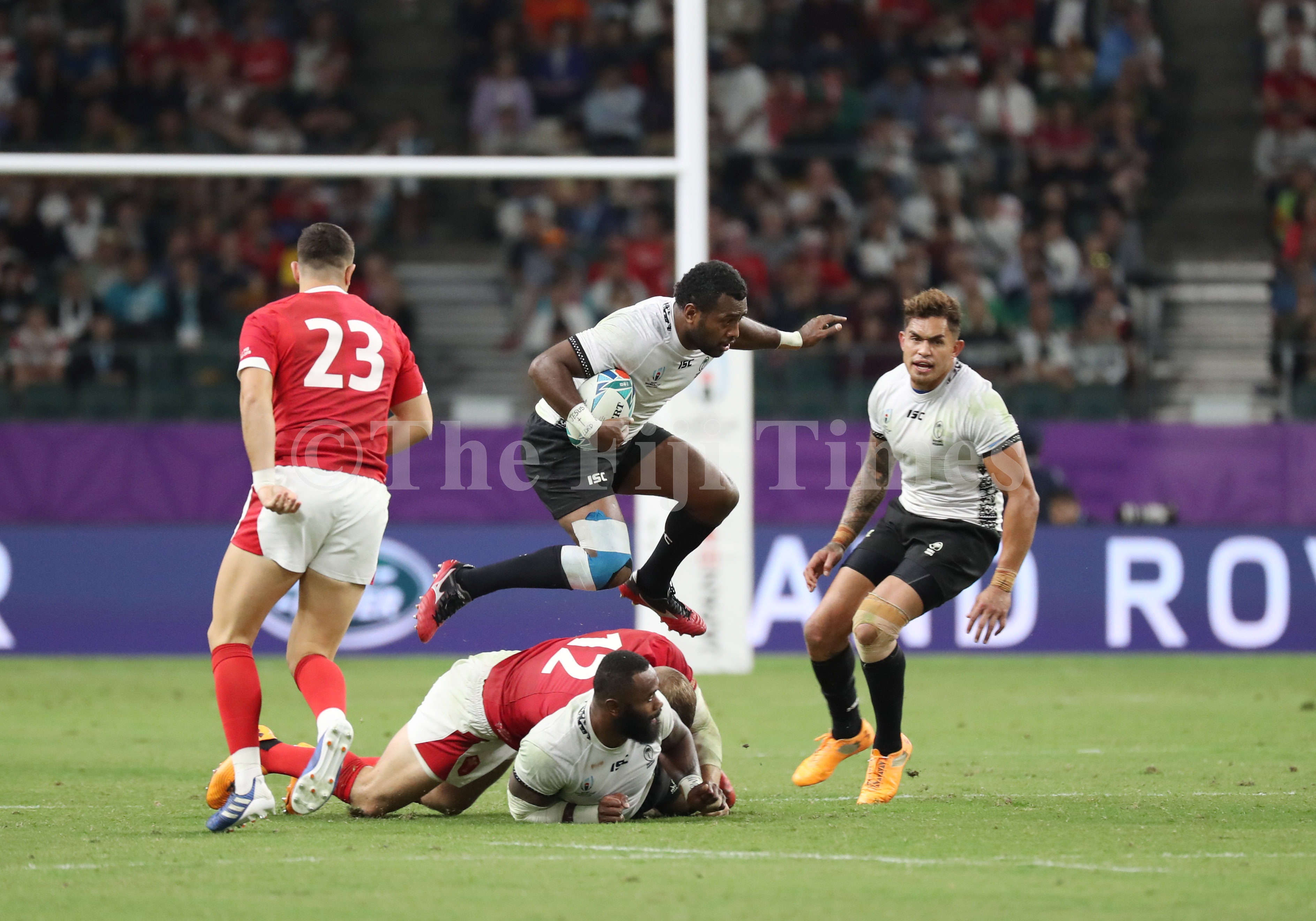 Flying Fijians fullback Kini Murimurivalu in action against Wales during their pool match at the Oita Stadium in Oita, Japan. Picture: JOVESA NAISUA

Well the 2019 Rugby World Cup is all but over for our beloved Flying Fijians, with it were some negatives but I guess a whole lot of positives. Unfortunately in my part of the world we are currently on blackout so as to prevent a repeat of the disastrous fire of 2017 that ravaged Northern California, but that is another story. So I did not get to watch the game yet as I was working that night and had planned to watch it the next day, but alas circumstances were beyond my control. Although I’ve heard from friends about the game, I have chosen to wait for the power to come back up and watch it at my own time at home. So that being said, my reflection of the Japan RWC 2019 will be the same as I had posted on social media, that this world cup has brought the game we love to a shambles. I remember playing the game and was taught that the man in the middle has the final say, and only they can control what they see, now we have the TMO dictating the game and overruling some decisions by the said “man in the middle”. Also the bigwigs in the white house need to speak up and prepare to hold their own at some of the calls being made at this world showcase, as the TMO were more vigilant on some matches and were seen to be lenient on others. We can’t keep going to these competitions only to be hard done by the officials, but that being said, we need to do our part as well, where I have always said all stakeholders needed to be on board from the grassroots right up to the top. If players are creating mistakes at the upper level, it’s because it was not taught or enforced well at the bottom level, and note all these players started their careers from home except for Campo. Also I agree with the director of Pacific Rugby Welfare Dan Leo “that Fiji has outgrown the Pacific Cup and needs to play in the tier 1”. So I urge the bigwigs in the White House to do their job and push for this as it is only onwards and upwards from here on. Big thanks to long John and his team for preparing the boys and to Dom and the boys keep your heads up and keep striving for that goal, you are on the right track, no matter what people say you are all champions. Lawrence Wara Santa Rosa, USA

There are members of the Flying Fijians who have taken to social media to announce their retirement from international duties. I hope this is not linked to the public backlash after the Uruguayan loss. MOHAMMED IMRAZ JANIF, Natabua, Lautoka

thanks that the canegrowers give to the FSC, Government, FNPF and other “donors” is to supply the mills with 80 per cent-plus burnt inferior quality cane. Well done. I suppose I could say that burnt cane suppliers should be penalised, those who produce good quality fresh cane be rewarded, and the long talked about cane purity payment system be introduced. Would that make a difference, I doubt it except for farmers to ask for more subsidies. It matters little I guess, the industry is not going to improve much, if at all. It is said by many that the Fijian economy is in poor shape. I can think of one way the economy can improve. Allan Loosley Tavua

It is sad that man’s nature is to take until there is no more. Dan Urai Lautoka

When my nei asked why I ordered a cake with a big flag of Uruguay a few days ago, I told her it was my Fijian way to temporarily silence uncomfortable emotions. When momo asked why I ordered another cake with the flag of Wales, I replied that it was my Fijian way to fix emotional problems. That said, the whole family will have to run in the sand dunes next weekend to offset NCDs. That’s where the fun ends. Mathieu Pelletier Sigatoka

Usaia Tagi’s letter on global warming (FT 06/10) is indicative of the growing diametrically opposite view that are now being expressed by an increasing number of reputable scientists on the causes behind climate change and global warming and the ensuing measures that needs to be taken in response. According to supporters of this view, man-made carbon emissions is only just one of the causes and not the major and only one. It really focuses on natural cyclical changes, involving eons of global warming and global cooling following each other ad infinitum. Anyway, it’s good to see these other views, beside the more popular one being printed in this daily. It is really now left to each of us as individuals, to digest all these and then make our own minds up because at the end of the day you will be accountable for the stand you take, and no one else. Thank you Mr Tagi for highlighting it. Edward Blakelock Admiral Circle Pacific Harbour

If teachers are not allowed to discipline students, can they just teach and leave the children to do what they want to do? If they don’t do their homework or get projects on time, let the child be, the teachers just move on regardless. The teacher walks in at the start of school, teaches and leaves at the end of the day. The wayward kid can be left to his own ways. The teacher has no business telling the child not to be naughty. If the child swears at the teacher, he or she just smile back and walk away. Can they do that? The teachers will have to have nerves of steel. Not all teachers have a high level of tolerance, just try staying with a rowdy lot from eight to 3pm. Your head can go bad. ALLEN LOCKINGTON, Kava Place, Waiyavi, Lautoka